An AFL footy star has been suspended for eight weeks after brutally punching a teenage opponent in the face so hard he broke his jaw.

Andrew Gaff pleaded guilty to intentionally striking Andrew Brayshaw in the face during a game between the West Coast Eagles and the Fremantle Dockers on Sunday.

At an AFL Tribunal hearing in Melbourne on Tuesday night, Gaff admitted to the offence while being supported by his father Paul.

Brayshaw, 18, will require dental implants after the attack which left his teeth ‘hinged backwards a couple of centimetres into his mouth’, according to his medical report.

He will have to have three of his teeth which are ‘effectively dead’ removed as a result of the punch. Check this out  PETER OBORNE: Why I believe Boris isn't too chicken to hold a snap election 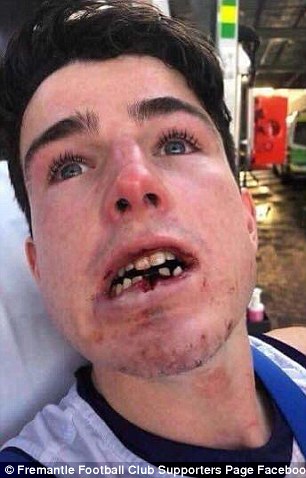 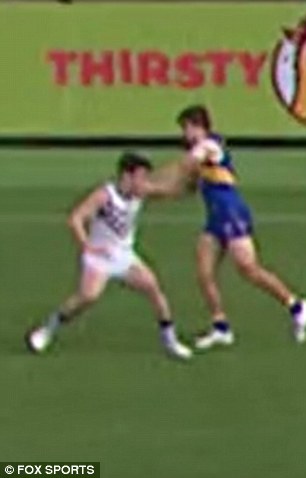 ‘It may take several months, with the teeth perhaps turning black. It may include dental work… including root canal therapy right up to possible implants,’ team doctor Ken Withers said.

Footage of the shocking incident was played on a repeated loop at the hearing and Gaff looked visibly upset, news.com.au reported.

QC David Grace asked Gaff if he had been reported, fined or reprimanded during his career, to which Gaff replied: ‘Not once’.

Gaff said he is often targeted by other players due to his running ability, and that he experienced ‘close attention’ in the game against Fremantle.

He said he ‘felt sick’ that he had punched him in the face, and instead intended to hit him in the chest.

‘It seems like he’s put his foot forward and planted and in a split second, his body has lowered significantly and in meaning to hit him in the chest, I’ve hit him in the face.’

Gaff told the tribunal he was in tears on the bench after the punch.

‘I’m devastated. I’m shattered… the main person I feel for is Andrew. 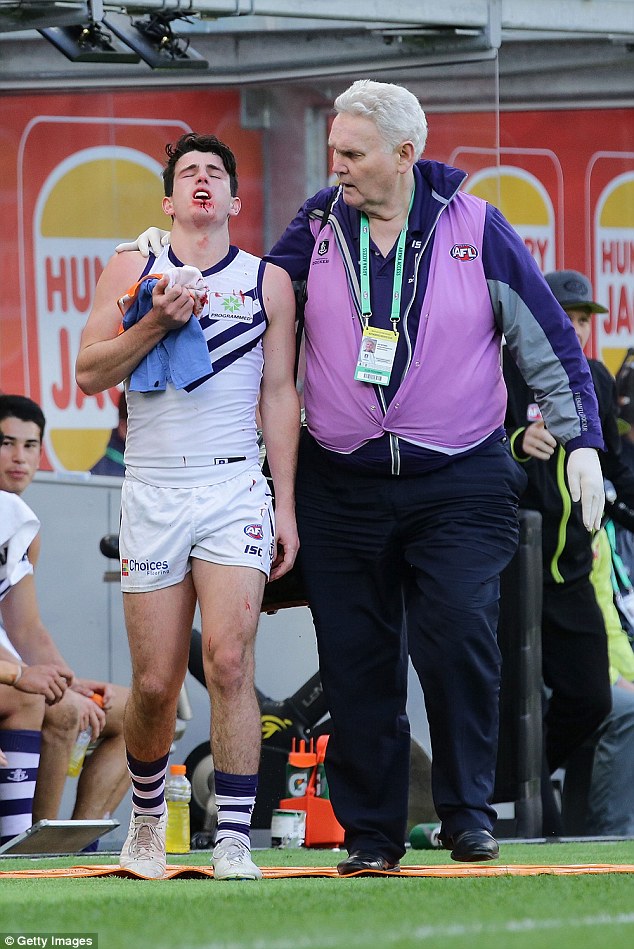 Check this out  The most popular sneakers on Instagram with 5.7 million tags have been revealed

Brayshaw, 18, will require dental implants after the attack which left his teeth ‘hinged backwards a couple of centimetres into his mouth’, according to his medical report

AFL counsel Jeff Gleeson QC argued Gaff knew Brayshaw’s head was lower than his when he swung his arm — a claim Gaff refuted.

Gaff’s character references including Eagles captain Shannon Hurn and assistant coach Dean Cox said he plays in the spirit of the game.

‘I was shocked. He is the last person on a football list I thought would partake in such an act,’ Cox said.

The AFL recommended a suspension of between eight and 12 weeeks.

‘Andrew Gaff looked at Brayshaw, squared himself, and threw a punch. Notwithstanding his evidence, he did indeed intend to strike Brayshaw in the head,’ Gleeson said.

Grace said eight to 12 weeks would be ‘manifestly excessive’.