Theirs was an edge-of-the-seat announcement. This week, a team of scientists claimed to have found the solution to a self-cleaning loo. Applied to bowls, their nanotechnology-inspired, spray-on product claims to keep your toilet pristine at all times.

Poppycock? Not necessarily. A growing array of ‘smart’ loos are transforming toilet visits into a technically-impressive art form and lavatory-goers, it seems, can’t get enough.

The trend for luxury loos has come from Japan, where electric commodes are de rigueur, but demand in Britain is increasing every year.

From smartphone apps that control seat temperature to built-in speakers and UV lid lights, Antonia Hoyle investigates the surprisingly sci-fi ways to spend a penny — if you’re feeling flush, that is. 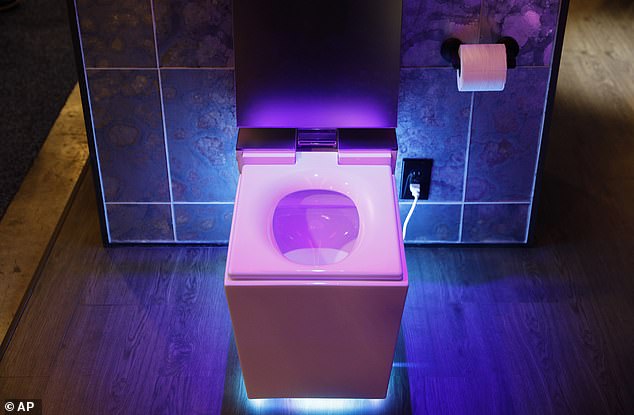 A growing array of ‘smart’ loos are transforming toilet visits into a technically-impressive art form and lavatory-goers, it seems, can’t get enough

Not so much a toilet as a bathroom throne, the Washlet Neorest AC costs a whopping £10,500 and comes from Toto, the Japanese manufacturer which boasts its own toilet museum in southern Japan. But what on earth do you get for your money?

There’s a sensor-activated lid, automatic flush, heated seat and ‘premist’ function that sprays water around the bowl before ablutions begin.

It also has an inbuilt bidet function that negates the need for toilet paper, with adjustable, extendable self-cleaning sprays (which Toto has found clean best at an angle of 43 degrees). 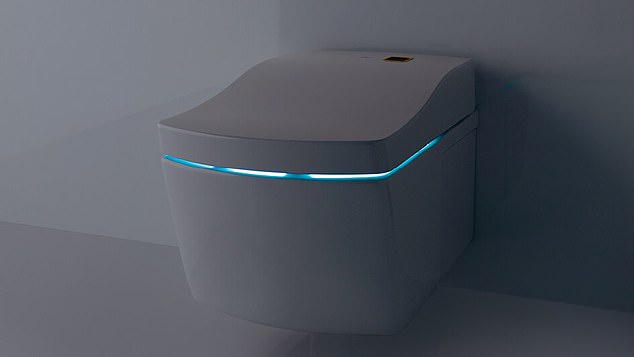 The Washlet Neorest AC costs a whopping £10,500 and comes from Toto, the Japanese manufacturer which boasts its own toilet museum in southern Japan

The flush, meanwhile, contains electrolysed water — a liquid produced by applying a low-voltage electrical charge to saltwater, which gives it an acidic pH value to kill bacteria.

There’s a UV light in the lid that works in conjunction with the zirconium glazed bowl, producing a process called photocatalysis (using light to produce a chemical reaction) to trigger an antibacterial process.

An air cleaning filter system that starts automatically when you sit down, meanwhile, comprises two filters — a pre-filter that catches particles, and a carbon filter that neutralises odour.

Check this out  Williams umpire controversy threatens to overshadow...

One of the new generation of ‘shower toilets’, this aims to be more ecologically efficent by cutting out the need for toilet paper, Made by German designer Grohe, the Sensia Arena has two self-cleaning spray heads at the top of the bowl that adjust to clean intimate areas after use.

Your preferred spray strength and water temperature can be saved by connecting the unit to your smartphone. 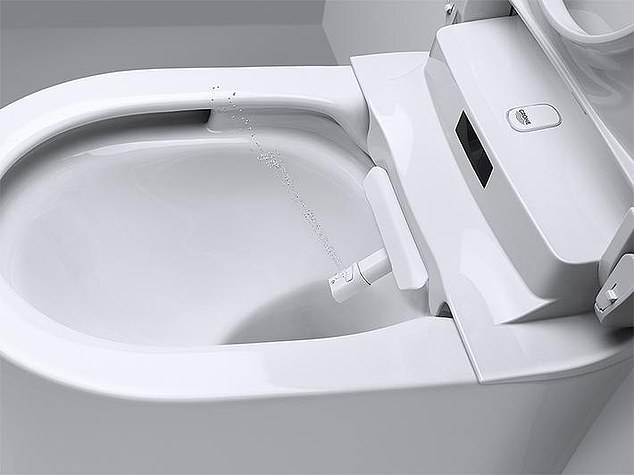 Made by German designer Grohe, the Sensia Arena has two self-cleaning spray heads at the top of the bowl

A warm dryer function with adjustable temperature control follows the spray, while a nightlight stops you banging into the bowl for 4am visits.

There’s also a triple vortex flush — meaning the water comes from three outlets at the top of the bowl to create maximum suction. This allows for washing as much of the toilet bowl as possible while using a normal amount of water — an average of five litres. 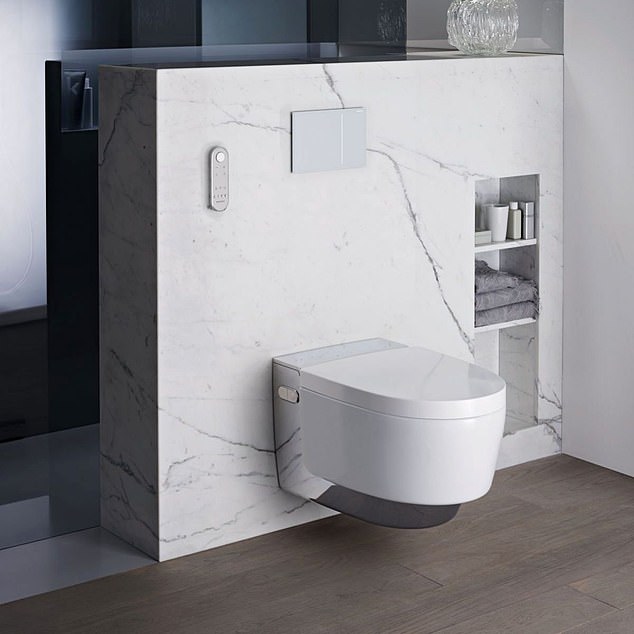 Ultimately, designers of smart loos believe that a bidet function will simply become a matter of course and certainly the Geberit Aquaclean Mera is designed for those who are keen on feeling very clean after a visit to the loo.

It has retractable sprays and driers that emerge from the top of the bowl and a remote control allows users to move the spray arm position settings to reach every angle.

Mark Lamb, of British bathroom company Victorian Plumbing, admits that luxury is a strong part of the appeal for buyers who have grown up in a spa-friendly society. ‘People now spend a lot on walk-in showers and wet rooms.

It almost seems odd to deck out a top-of-the-range bathroom and forget about the toilet,’ he says.

Send limescale round the bend

For those living in hard water areas, the Cleanet Navia presents a design solution to scaled up pipes — it boasts a red light at the base that lets owners know when descaling is required and the descaling function is activated.

The water hardness for the region can be programmed via a smartphone app. 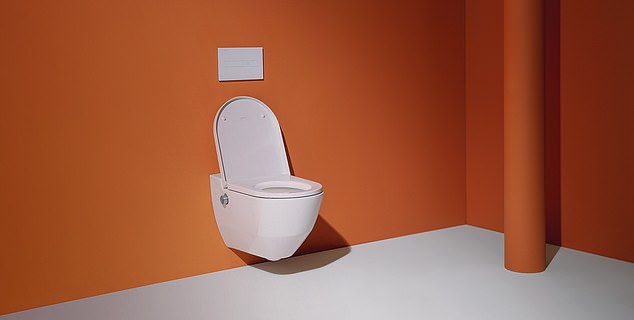 Additional features include a retractable shower arm concealed in the enamel — which sprays at a ‘high-volume’ 3.5 litres of water per minute — and a drier that can be controlled by either a rotary knob on the ceramic or via a smartphone app.

App Integrated sound insulation results in a quieter flush, while the rimless, jointless ceramic design makes it easier to clean.

Fancy playing a podcast while spending a penny? The Numi 2.0 by Kohler lets you listen without lifting a finger, thanks to the voice-activated Amazon Alexa built into its Bluetooth speakers.

Mark Lamb, of British bathroom company Victorian Plumbing, says the advent of a sound system in toilet systems originated in Japan as a way of maintaining loo-goers’ privacy.

Not yet available in Britain, it has an inbuilt voice-controlled ambient lighting system that can be adjusted via voice control to suit your mood. Up to six users can have their own toilet ‘profile’ with ideal seat temperature and preferred playlist.

It’s all very well washing with water while listening to music, but there is one ‘ambience’ everyone is keen to avoid.

This smart loo contains not only a heated seat, a smartphone-activated oscillating shower spray and warm air dryer, but a sensor that activates an automatic deodoriser when you sit down. 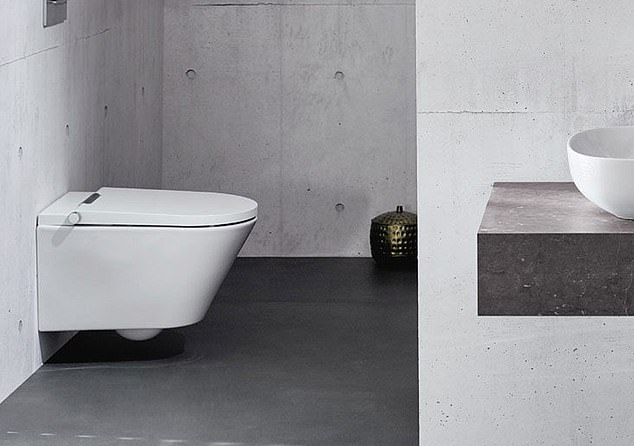 This smart loo contains not only a heated seat, a smartphone-activated oscillating shower spray and warm air dryer, but a sensor that activates an automatic deodoriser when you sit down

Check this out  China is covering up evidence of its mass Muslim detention camps, sources claim

The Axent One is one of several new offerings that mask odour in different ways. ‘Some models have a curved spiral designed fan to suck air in a circular motion. Others have a fan that creates an air ‘shield’ across the top of the toilet after the flush is initiated.

‘Some draw in less-than-sweet air and put it through a carbon filter,’ explains Mark Lamb.

However, they all aim to reduce the chemicals produced by bottles of air fresheners and sprays.

But spending a penny doesn’t always cost you a fortune

Toilet Coating, the brainchild of Tak-Sing Wong, an engineering professor at Pennsylvania State University, was unveiled this week.

He and his team were approached as part of Bill and Melinda Gates’ Reinvent The Toilet Challenge to support new technologies. A spray containing molecules that grow on contact with the toilet bowl enamel, it creates a ‘hair’ like structure thousands of times thinner than human follicles but capable of stopping dirt sticking when combined with the spray’s silicone lubricant.

The spray can reduce the amount of water required to clean the loo by 90 per cent, making it environmentally friendly, too.

This battery-operated water-resistant light is fitted to the side of your loo. It turns on when you get within 6½ft and can change colours eight times on a two-minute cycle.

Fed up with cleaning your loo? This battery-operated brush spins at 280 rotations per minute to keep your bowl pristine without elbow grease.

A SHELF FOR YOUR PHONE

A toilet roll holder with a shelf specifically designed for your iPhone? For those really urgent calls.