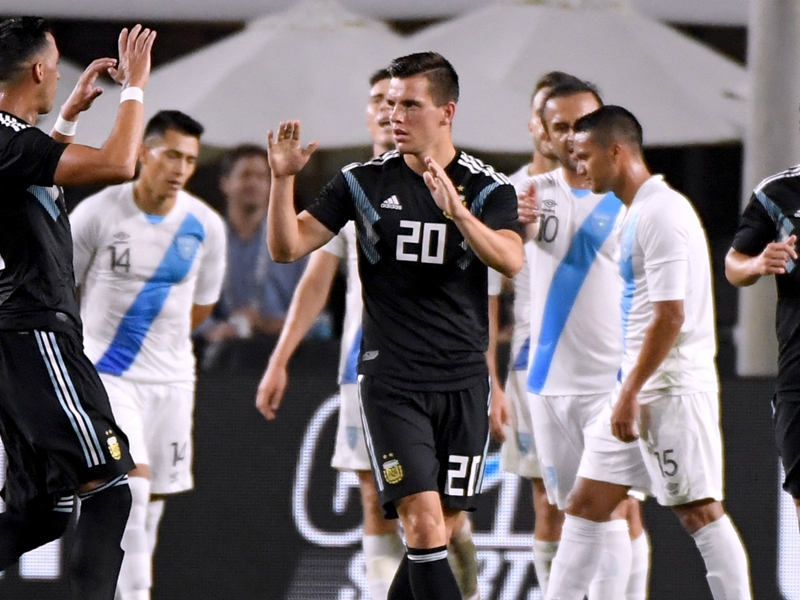 Giovanni Simeone and fellow debutant Gonzalo Martinez scored on their bows in the absence of Argentina superstar Lionel Messi in LA.

Giovanni Simeone marked his debut with a goal as a Lionel Messi-less Argentina outclassed Guatemala 3-0 in an international friendly.

Messi was not included as the five-time Ballon d’Or winner and Barcelona superstar reportedly considers his future following Argentina’s tumultuous World Cup campaign, which ended in the last 16.

Jorge Sampaoli lost his job as a result but interim boss Lionel Scaloni fielded a new-look line-up and reaped the benefits, albeit against minnows Guatemala in Los Angeles on Friday.

Mauro Icardi and Paolo Dybala were on the bench for Argentina’s first match since their loss to France at the World Cup, with Simeone, Martinez, Exequiel Palacios and goalkeeper Geronimo Rulli making their bows.

Argentina and Guatemala were separated by 135 positions in the FIFA rankings and the gulf in class was evident as the South American giants dominated.

Ramiro Funes Mori spurned a great chance to open the scoring in the 15th minute when his powerful header sailed wide of the post, while Cristian Pavon and Polacios also came close for Argentina.

Argentina eventually made the breakthrough approaching the half-hour mark thanks to Martinez, who stepped up and converted a penalty after Lo Celso’s shot struck the hand of Elias Vasquez.

It was one-way traffic as Lo Celso – on loan at Real Betis from French champions Paris Saint-Germain – made it 2-0 with a powerful and low effort from outside of the area.

Simeone got in on the act a minute before half-time after Guatemala were dispossessed and the 23-year-old stepped away from his opponent before firing a shot across goalkeeper Paulo Motta.

There were multiple substitutions in the second half and it unsurprisingly impacted the rhythm and flow of the match, with Argentina failing to add to the scoreline.

What it means: Tougher challenges await but cause for optimism

Ranked 146th in the world, Argentina were always overwhelming favourites to see off the CONCACAF nation. It could and should have been more for Argentina but more importantly, Scaloni’s men looked like a unit, which has not always been the case.

Check this out  Inter triumph a warning to title rivals, says Candreva

Pat on the back: Scaloni brings Argentina together

The Argentina national team has been a difficult place to be in recent months but former international Scaloni restored some calm on Friday. Despite plenty of new faces, Argentina gelled and played with a purpose.

It is hard to be too critical of this new-look side but if there was anything to mention, it was Argentina’s winning margin, which should have been greater given their dominance.

Argentina will face a much sterner test when they play South American rivals Colombia in New Jersey on Tuesday, while Guatemala are scheduled to meet Ecuador in Illinois.