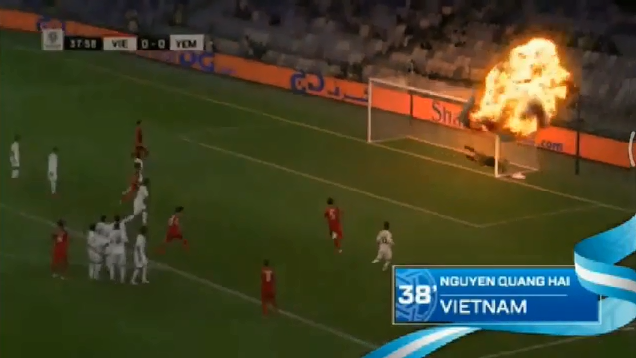 The Asian Football Confederation has deleted an insensitive social media post showing an explosion in the Yemen net from the Asian Cup match against Vietnam.

A video showing a free kick goal scored by Vietnamese winger Nguyen Quang Hai in their 2-0 victory over Yemen on Wednesday was posted on the AFC’s Asian Cup Facebook page with the ball changed into an exploding missile.

After several social media users posted their criticism of the AFC’s choice of video, the confederation pulled it off the Facebook page and reposted it with a star instead of a exploding missile.

The result saw Yemen knocked out of the Asian Cup without getting a single point or scoring goal – while they conceded 10 in their own net.

Yemen has been in the grips of a civil war since 2015 where it’s believed more than 60,000 people have been killed because of the conflict or the ongoing famine it has caused.