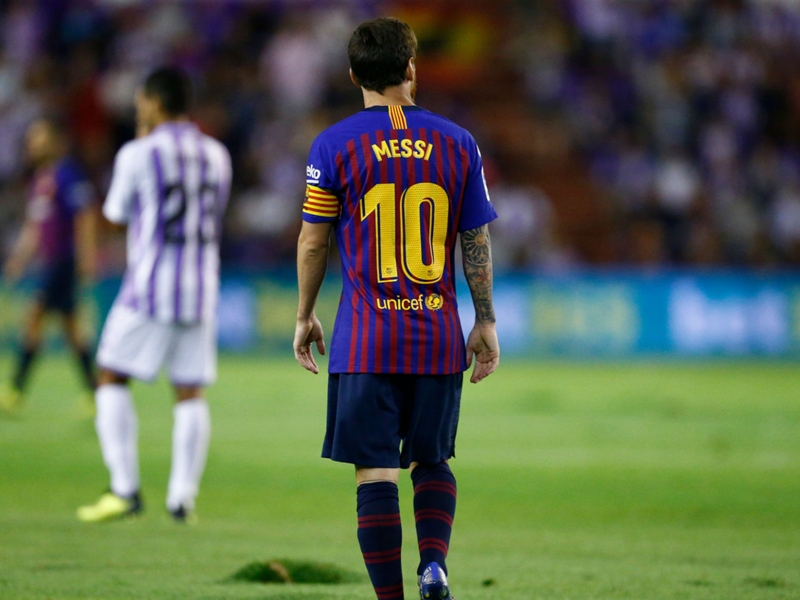 The surface at Real Valladolid’s stadium was well below the standard expected for league matches, according to the competition’s president

Barcelona’s coach and players were furious with the condition of the pitch at Real Valladolid’s Estadio Jose Zorrilla on Saturday, as La Liga president Javier Tebas promised disciplinary action.

Ousmane Dembele’s goal in the 57th minute earned all three points in a 1-0 win for the reigning champions, but concerns about the state of a recently re-laid surface threatened to overshadow the contest.

And after a week in which prominent players threatened strike action in opposition to plans to stage a La Liga match in the United States, defender Gerard Pique was pointed in his criticism.

“Before we sell our product abroad, we’d do well to look here first,” he said.

“They want to take our players to the US, but the state of the grass today was a disgrace.

“The players risked getting injured. It was very regrettable and I hope action is taken on the matter.”

Tebas tweeted late on Saturday, saying: “The state of [Estadio] Jose Zorrilla’s turf did not meet the minimum conditions required for a COMPETITION such as @LaLiga, evidently [we are] proceeding to open the corresponding disciplinary file…”

Barca coach Ernesto Valverde had earlier said: “There was a very clear issue with the pitch.

Check this out  Boa Morte: "Brexit doesn't put me off the UK, my kids are British"

“I haven’t seen the grass lift like it did for a long time. It’s something that has to make us think, given we want to take the league elsewhere.

“I don’t think it made for a good spectacle. It’s not only about winning but also the fans enjoying themselves. Luckily there were no injuries.”

Pique’s Barca and Spain team-mate Sergio Busquets was also vociferous in his criticism of the conditions.

“With the pitch being the way it was, it was very difficult to play on it,” he said.

“It’s regrettable that the best league in the world has to be played on a pitch like that. There were areas of it that looked like a beach.

“It’s also incredible that the league didn’t send anyone to review it, just four days after it was re-laid.”