The fuselage of one of Boeing’s new 777X aircraft completely ruptured in pressure tests in September, a previously unreported major setback that could delay the arrival of the long-haul jet another six months, according to informed sources.

Already deeply mired in the crisis surrounding its 737 MAX, the premier US aircraft manufacturer now may have to put back the release of its new line of long-haul jets until mid-2021 due to the unexpected weakness in the 777X airframe.

Newly-released images show the fuselage skin ripped wide open and caused the passenger door to fall out, damaging behind the wing, during the tests that deliberately take stress to extremes beyond normal operating conditions to ensure the strength of the construction materials.

Several sources, who insisted on anonymity, told AFP that a wing was damaged when Boeing put the aircraft body through pressure tests at their Everett, Washington hub and the fuselage gave way at 1.48 times the limit load. 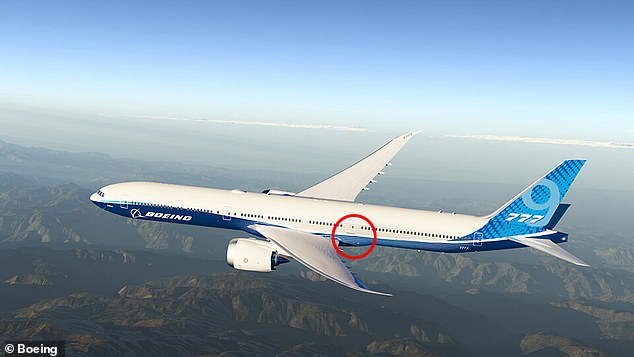 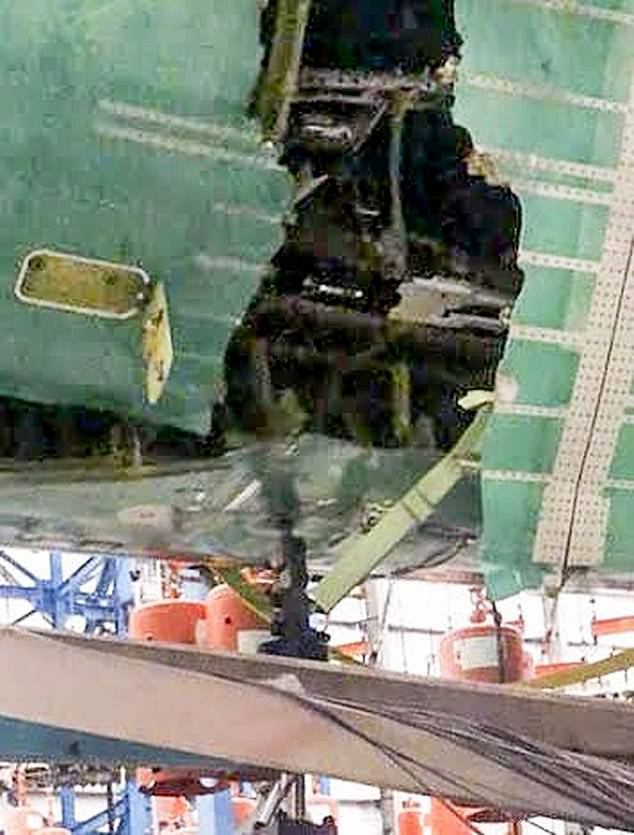 It came after the fuselage skin ripped wide open just behind the wing (pictured). ‘There was a depressurization of the aft fuselage; the structure that supports the door blew off,’ source said 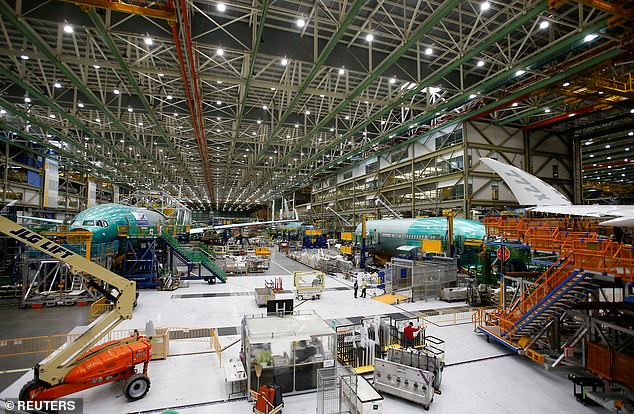 The reason the fuselage failed in the test has yet to be determined. But aerospace industry sources point to Boeing’s use of robots for assembling the fuselage at its Everett, Washington plant

‘There was a depressurization of the aft fuselage; the structure that supports the door blew off,’ said a second person. ‘It was not just the door; it’s very serious.’

Check this out  Police hunt for man over murders of ex-partner and her...

It was previously reported that the outward-hinging cargo doors blew out but new information says it was the plug-type passenger doors that only open inward.

The doors are larger than the hole they close, the Seattle Times reported Wednesday, and the structure around it was so damaged that the pressure cause it to fall to the floor.

The Times said it was so loud a worker in the next bay heard ‘a loud boom, and the ground shook’ as they tested what’s the be the most efficient twin engine jet in the world.

A source told the Times that the localized area of the keel was the problem: ‘The doors were not a precipitating factor.’

While the approval process benefits from the 777X being viewed by the FAA as a ‘derivative’ of the 777, meaning some systems are already certified, there have also been problems with the new aircraft’s wing design and its electronics, according to industry sources.

During the test that puts 3.75G of pressure on an aircraft that would probably only experience a maximum of 1.3G in flight, the wings bent upward about 28 feet which is far beyond the maximum flight deflection of 9 feet, the Seattle Times reported.

The US Federal Aviation Administration, whose officials oversaw the test, has opened an investigation to determine why the fuselage failed, a regulatory source said.

The reason the fuselage failed in the test has yet to be determined. But aerospace industry sources point to Boeing’s use of robots for assembling the fuselage at its Everett, Washington plant. 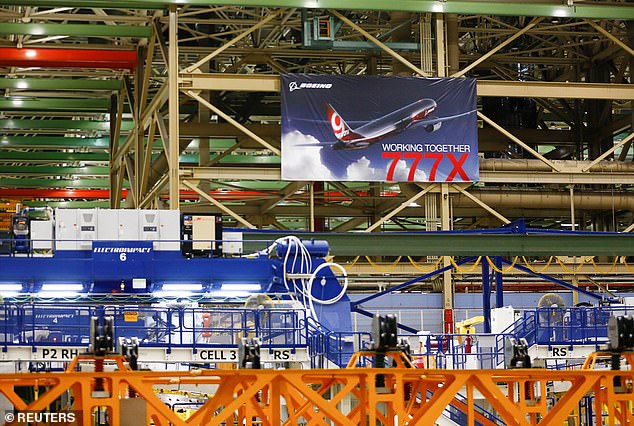 A Boeing source said the localized area of the keel was the main problem not the door. An FAA source said it’s unlikely Boeing will have to do another test as the disaster occurred with only 1% of the stress test left

In mid-November, Boeing announced that it will put humans back in charge of the job.

‘The door is unlikely to fail unless something else failed around it,’ a third anonymous source told AFP. ‘They need to review the design of the aircraft and make some changes.’

‘Boeing does know what they need to do,’ a person aware of Boeing’s plans said, adding that a fix involves reinforcing that section of the aircraft body.

The body modifications could set back the calendar for delivery of the first 777X by six months, the sources said.

‘The good news is they found it and can address it,’ an FAA engineer told The Times. ‘They found a problem they can fix. They can beef up the structure based on analysis.’

FAA spokesman Lynn Lunsford said they are communication about how to meet the requirements, adding: ‘The FAA requires manufacturers to meet design and certification standards. How they choose to do that is up to them.’

But it was not clear how the incident will impact the certification of the 777X, which is already months behind schedule for introduction into service.

Last month Boeing said the pressure test result will not impact the schedule for flight tests for the 777X, required for the aircraft’s certification. 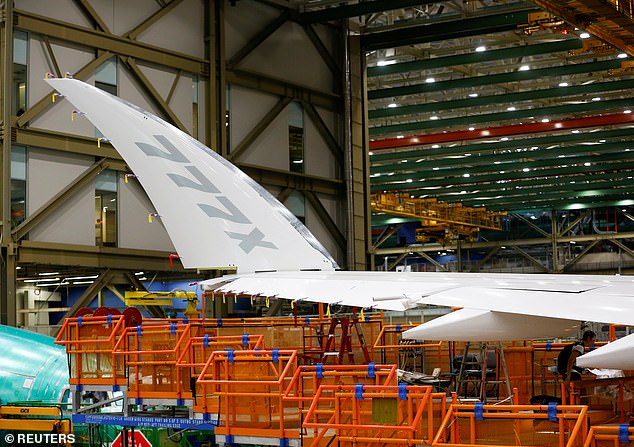 During the test that puts 3.75G of pressure on an aircraft that would probably only experience a maximum of 1.3G in flight, the wings bent upward about 28 feet which is far beyond the maximum flight deflection of 9 feet

Check this out  Cancer sufferer, 29, reveals she was made to feel like a 'hypochondriac' for three years by a GP

The disastrous pressure test results represent a significant new blow for Boeing, which had already delayed 777X deliveries due to problems with its new General Electric GE9X engine.

First deliveries had been planned for 2020, but in October Boeing changed the date to the start of 2021. That could now slip to mid-2021, the sources said.

‘What we’ve seen to date reinforces our prior assessment that this will not have a significant impact on the design or on the preparations for first flight,’ the company said on October 23.

The 777X was supposed to bolster Boeing’s dominance over Airbus in the long-haul aircraft business, weakened by the US-China trade war which has dried up Chinese orders for 787 Dreamliners.

However, Emirates, tired of delays, decided last week to cancel orders for 30 777X to replace current Boeing 787s. That could cost Boeing some $3.5 billion in sales, based on catalog prices for the aircraft.

Then on Tuesday the FAA said it plans to step up its oversight of the aircraft responsible for two deadly crashes, even when the model is returned to service.

It will oversee all aspects of certifying the MAX, including when individual planes come off the production line.

Typically, the regulator would have only been involved in certifying the overall type of plane, while the manufacturer is left with the day-to-day clearances of aircraft.