By Jason Groves and Larisa Brown for the Daily Mail

Boris Johnson will not hold one-to-one talks with Donald Trump in a bid to prevent his visit knocking the Tory election campaign off course.

Mr Trump arrived in the UK tonight ahead of a two-day summit of Nato leaders, starting tomorrow.

The prospect of the outspoken US President’s visit has been a nightmare for Tory strategists, who fear that one misplaced comment or Tweet could damage Mr Johnson’s electoral fortunes.

Mr Johnson last week appealed to Mr Trump to avoid commenting on the UK election during his visit, saying: ‘When you have close friends and allies like the US and the UK, the best thing is for neither side to get involved in each other’s election campaign.’ 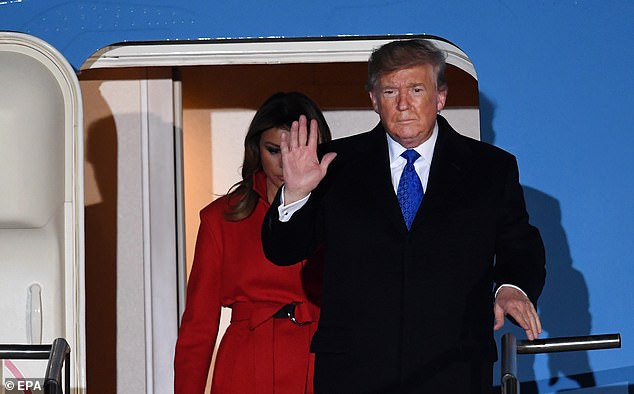 Donald J. Trump and his wife Melania disembark from Air Force One upon arrival for a NATO Summit, at Stansted Airport this evening

This week’s meeting, which marks Nato’s 70th anniversary, comes as allies are at odds over Syria. Mr Trump has also demanded members increase their military spending.

Mr Macron has been critical of Turkey’s decision to send troops into northern Syria following Mr Trump’s withdrawal of US forces from the area.

Downing Street yesterday refused to confirm if the two leaders would hold talks. But a senior Tory source last night said the Prime Minister would not have one-to-one talks with Mr Trump.

The lack of a dedicated meeting is thought to be unprecedented for a visiting US President.

But ministers want to avoid giving Labour the opportunity to recycle its disputed claims that the NHS would be ‘on the table’ in a post-Brexit trade deal with the US. 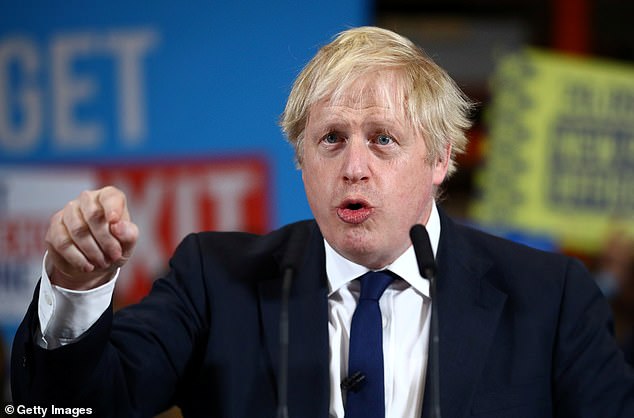 Mr Corbyn last night wrote separately to both men urging them to suspend trade talks until it is taken ‘off the table’.

The Campaign for Nuclear Disarmament, of which Mr Corbyn is a vice-president, will hold a demonstration against Mr Trump’s visit outside the palace with a number of NHS workers.

But Tory concerns go beyond the NHS row. There are fears Mr Trump could weigh in on last week’s terror attack or Brexit. He is expected to hold a press conference tomorrow when he will likely be quizzed on British politics.

Mr Johnson will formally welcome Mr Trump to the summit and will be pictured with him at the Nato event.

Last week, Mr Corbyn said the documents – first shared online in October – showed the Tories were plotting to offer up the NHS for sale.

But researchers said the way they were shared mirrored a campaign which used fabricated or altered documents to spread false narratives.