A devastated family have paid tribute to their 10-year-old ‘superhero’ son who died while playing in his bedroom.

The tragic incident has left the Lyons family, of Stapleford, Nottinghamshire, heartbroken as they struggle to come to terms with what happened on Monday, August 12.

Issac Lyons was so excited about a family trip to Alton Towers that, unable to sleep, he got out of bed to dress up as a Roman, before slipping and dying instantly, his family said. 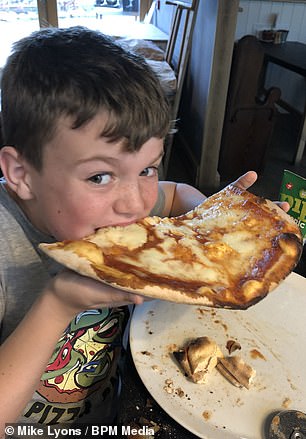 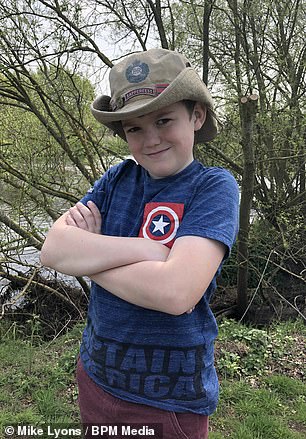 Issac Lyons, 10, was so excited about a family trip to Alton Towers that, unable to sleep the night before, he got out of bed to dress up as a Roman, before slipping and dying instantly, his family said

He has been described as ‘a kind, funny, and passionate’ youngster, with ‘an extraordinary imagination’.

The St John’s C of E Primary School student was obsessed with movies, especially Marvel films, and had written his own superhero stories.

He was also ‘deeply caring of others’, wanting to donate his own toys to charities he saw advertised on the television.

His mother Claire, 43, and father Mike, 45, said he has left a huge hole in their hearts and that his personality radiates around the house through the things he created, such as drawings.

Mrs Lyons said: ‘He had the most extraordinary imagination. He would write stories and create superheroes. He absolutely loved movies.

‘The first thing our daughter Grace said is ‘he won’t be able to see the new Spiderman movie’.

‘If he was interested in something it would be his whole world and he was deeply caring of others.

‘If an advert for Unicef came on he would be in floods of tears and wanted us to give them money or he would go find a toy he could donate.’

Mr Lyons, who served in the Royal Engineers for 18 years, added: ‘If we wasted any food he would get upset because there was people in the world that didn’t have any. He was very thoughtful and kind.

‘His future plan was to buy the house next door to ours so he could look after his grandparents and not have to move away from us.’ 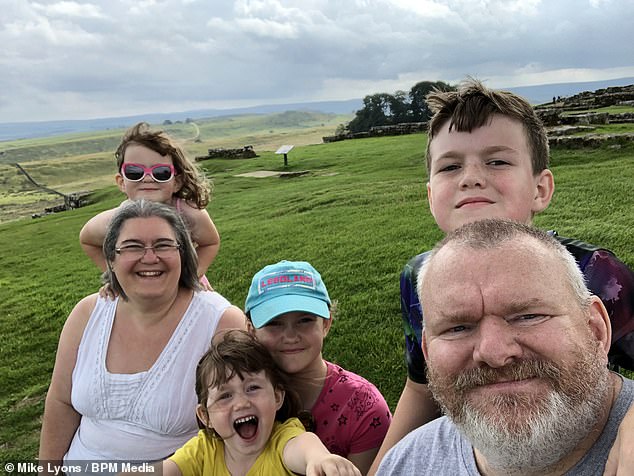 His mother Claire, 43, and father Mike, 45, said he has left a huge hole in their hearts and that his personality radiates around the house through the things he created, such as drawings. Above: Isaac (top right) with his parents and siblings

He was a ‘rainbow baby’ a phrase coined for a healthy baby born after a previous miscarriage.

The family had just got home from a holiday in Cumbria when the tragedy happened.

They had visited Hadrian’s Wall, where Issac had become fascinated with Romans history.

On Monday, August 12, they had planned to visit Alton Towers and the children had been excited about the roller coasters they were going to ride.

The couple put the children to bed at around 7.30pm – the next morning they found their son dead in his bedroom.

Mrs Lyons said: ‘What we think happened is he could not sleep because he was so excited. He had got up, taken off his pajamas, and dressed up as a Roman.

‘It was an accident, he slipped while playing. He died instantly. How does your child die in his own bedroom and we did not know?

‘I don’t think I will ever come to terms with this. I thought I would hear a shout.

‘It was tragic and sudden.’ 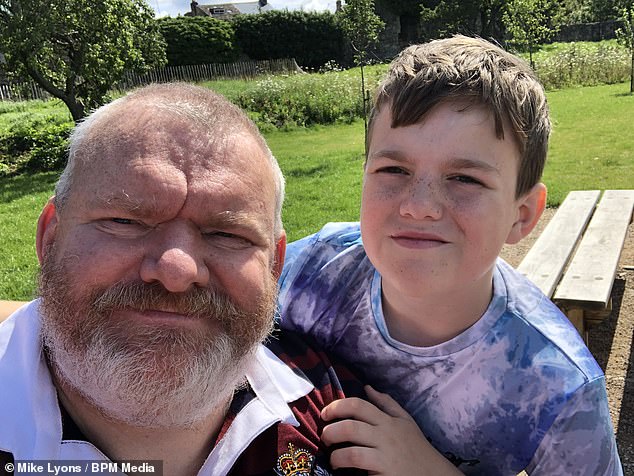 Mr Lyons, pictured above with Isaac, said the pain of his son’s death would be eased in time by the knowledge that the little boy had died while playing

She added: ‘Issac is everywhere. He is on drawings, on every piece of paper, it is a constant machine gun in your head.

Mr Lyons added: ‘He was playing, having fun, and then it stopped. In time that will help but now it does not. It will be a comfort that he did not suffer.

‘He was our superhero. He was everything to us. It was an awful loss and a waste of a wonderful young man.’

The family said they cannot believe the amount of support they have received from the local community.

‘She had three cakes,’ Mrs Lyons said. ‘We feel very cared for.

‘We have been overwhelmed by the kindness by people who know us and people we have never met.

‘I have been moved by the little things that people have said about Issac.

His funeral will take place on September 21.

An inquest into his death has not yet been opened but a file is being prepared for the coroner.

A Justgiving page has also been set up to support the family, raising £5,000.

It will be used for a memorial plot to commemorate the life of their ‘beautiful boy’ and to help the family as they struggle to come to terms with what has happened.