By Chris Hastings Art Correspondent For The Mail On Sunday

A drab civic building in Holland where the Maastricht Treaty was signed to create the European Union is just one of the latest ‘European Heritage’ spots – locations considered to be on a par with historic castles and even the Acropolis in Athens.

Sites, properties and objects which will – according to the EU’s guidelines – ‘strengthen’ European citizens’ sense of belonging to the union and promote greater ‘integration’ are awarded European Heritage status. 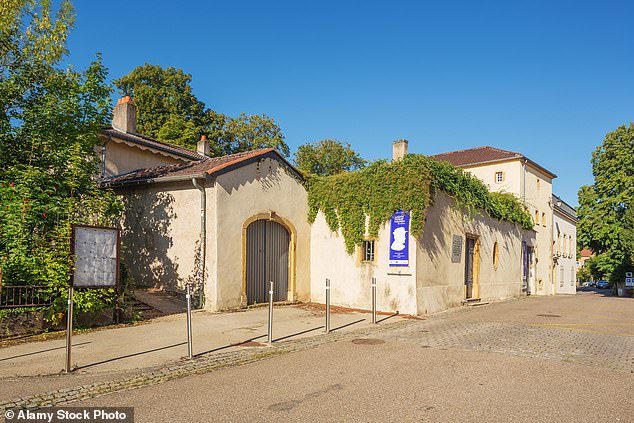 marvel at shrine to Europe ‘father’: For the princely sum of €5, you can visit the home of former French premier Robert Schuman and see the very spot where he conceived his inspiring vision of the European Coal and Steel Community. Said to be ‘pervaded with the personality of The Father of Europe’, the house in Scy-Chazelles even offers the excitement of an interactive museum dedicated to Schuman’s life

Check this out  JT farewell a chance for Titans to impress

The scheme has so far cost €2.1million – almost £1.9 million – ultimately funded by European Union member countries, including the United Kingdom.

Critics have branded it a costly vanity project to promote EU values. To date, 38 sites and artefacts in 18 member states have been awarded the label.

One is the nondescript home of France’s former prime minister, Robert Schuman, in the tiny village of Scy-Chazelles. Schuman helped to establish the EU’s forerunner, the European Coal and Steel Community, in 1951. 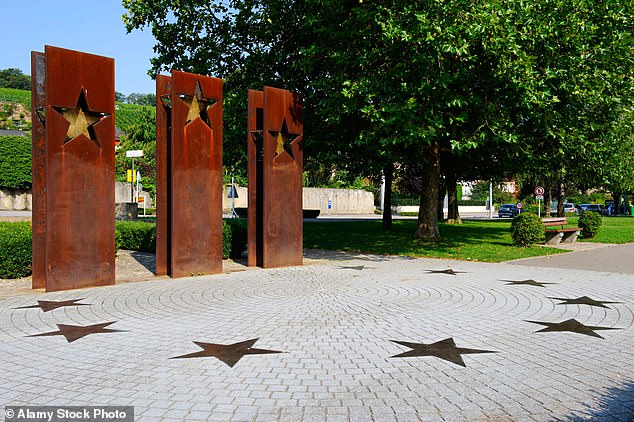 Snatch a selfie at Schengen Spires: A Luxembourg village with a population of just 600 inhabitants, Schengen certainly makes the most out of being the place where European leaders agreed upon freedom of movement. Schengen boasts not only the European Centre museum and EU-themed guided tours but also this brutal commemorative sculpture – a fantastic addition to any Instagram page

The birthplace of Italian statesman Alcide De Gasperi – regarded as the other founding father of the union – has also been granted the prestigious title. The heritage label has, however, failed to boost visitor numbers to either site.

Other locations on the list might be judged more worthy of historic status, such as the Imperial Palace in Vienna, Germany’s medieval Hambach Castle, and the heart of ancient Athens.

But few will understand why they have been matched with the Dutch town of Maastricht, where the euro was born, or the Luxembourg village of Schengen – complete with a rusty sculpture – which gave its name to the EU treaties on freedom of movement. 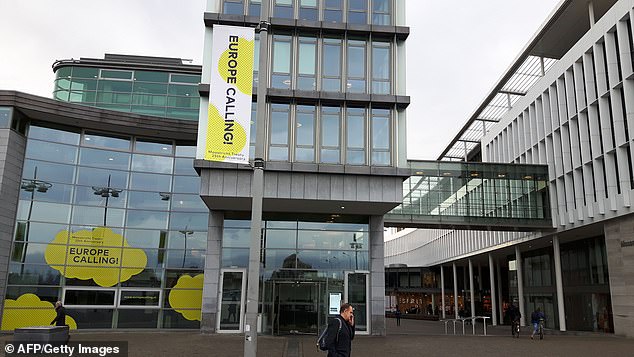 Get moved by majesty of Maastricht: No, it’s not a call centre. This austere civic building in Maastricht is where the treaty was signed in 1992 to create the European Union, in what the publicity proclaims as the moment Europe could successfully ‘define itself in the post-war world’. Visitors are invited to admire ‘two very beautiful rooms’ where national leaders ratified the document

Brexit Party MEP Ann Widdecombe said: ‘It is blatant self-promotion on the part of the EU. Nobody in Britain asked to name an historical site would alight on any of these. It is this sort of thing that convinces people that as soon as we are out the better.’

Tory MP Andrew Bridgen, a prominent Eurosceptic, added: ‘This is another example of the European Union wasting taxpayers’ money. If the EU was so good for its citizens then it wouldn’t feel the need to promote itself in this way. The fact is it isn’t.’

Check this out  Tiger embarks on the 'longest walk ever' in India, travelling 807 miles in search of prey or a mate

The European Commission, which administers the scheme, confirmed the UK had chosen not to take part in the programme.

Gen up on… er, Alcide De Gasperi: Die-hard Remainers can complete their EU tour in the tiny Italian mountain village of Pieve Tesino, birthplace of the country’s former leader Alcide De Gasperi – fondly remembered by locals as a founder of the European community. The director of the dedicated museum (tickets cost €3) proudly describes the site as particularly popular with ‘the elderly and retirees’

A spokesman said all applications were properly scrutinised and no one had raised any objection to the chosen sites.

He added: ‘The primary object of the action is to contribute to strengthening European citizens’ sense of belonging to EU… as well as an appreciation of national and regional diversity, and to strengthen intercultural dialogue.’

EU officials, who are currently appraising 19 new applications, hope to have awarded 100 European Heritage labels by 2030.