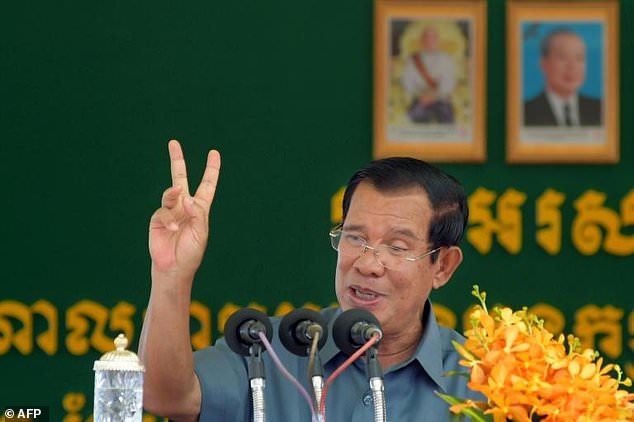 Cambodia’s Prime Minister Hun Sen has said more pardons are likely, but rejected suggestions he was bending to international pressure

Fourteen Cambodia opposition supporters jailed for insurrection were released Tuesday, the largest pardon since Premier Hun Sen extended his grip on power in an election that turned the kingdom into a one-party state.

The main opposition Cambodia National Rescue Party (CNRP) was dissolved months before the July election, giving Hun Sen’s ruling Cambodia People’s Party a clean sweep of seats in parliament, and many CNRP members and government critics were rounded up in a crackdown on dissent.

The 14 released Tuesday from Prey Sar prison in Phnom Penh were pardoned by the Cambodian king for convictions that carried between seven and 20 years behind bars.

Their pardons came after they all apologised to Hun Sen in letters.

They were arrested in 2015 and charged with insurrection after clashes that left dozens of security officers and protesters wounded.

“We could work together. We may argue when it comes to politics, but we shouldn’t kill each other,” Meach Sovannara, a former press officer who had been sentenced to 20 years, said in a Facebook Live broadcast after he was released.

Check this out  Stephanie Pratt announces she's returning to The Hills... but fans might not recognize her new face

Analysts have said Hun Sen could use pardons and the kingdom’s pliant courts to help deflect criticism, as he has in the past, after July’s vote was widely decried as a sham.

The US widened travel bans on the country after the vote but Cambodia’s main concern is its tariff-free access to European garment markets, where sales fuel the country’s largest industry.

Land rights activists and a former lawmaker have also been freed in recent days.

But the pardons have yet to include the CNRP’s co-founder Kem Sokha, who was arrested before the party’s dissolution last November and thrown in jail on treason charges.