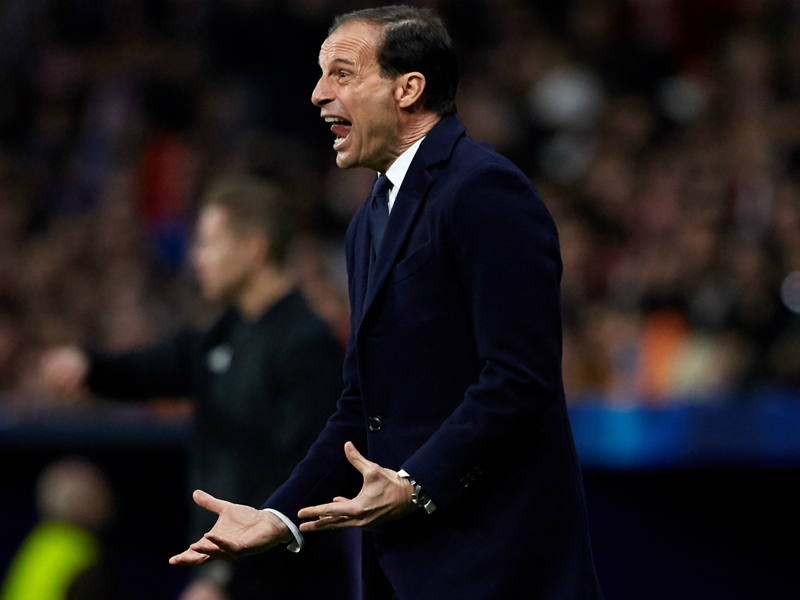 Juventus are capable of producing “something extraordinary” this season in the wake of their Champions League last-16 first-leg defeat to Atletico Madrid, head coach Massimiliano Allegri says.

The runaway Serie A leaders were beaten 2-0 at the Wanda Metropolitano on Wednesday, with Jose Gimenez and Diego Godin putting Atleti in a commanding position to reach the quarter-finals.

Juve only won twice in their last five games in all competitions, a run that has included a 3-0 Coppa Italia exit at the hands of Atalanta as well as their Champions League loss.

Allegri, though, thinks his side can steel themselves for a comeback against Atletico if they win their next three league matches against Bologna, Napoli and Udinese.

“We have 20 days to prepare for this great challenge [against Atleti],” he told a news conference on Saturday.

“It will surely be a great evening. I don’t know if we will get through or not, we’ll see at on March 12, but we must do everything to ensure we’re in the best condition during these next three Serie A games.

“[Sunday] is another important match because we need to get to the game in Naples with our lead unchanged. That’ll be a great game to play, and then we’ll have Udinese and then Atletico. We’re lucky to be going through these 20 days. If you won every game, which is impossible, then life would be flat and dull.

Check this out  Uganda Cranes are better than Harambee Stars - Matano

“So, we’ve had a good shock. It wasn’t easy before and it won’t be easy on March 12, because we’re playing against a team who have won a lot in the last nine years. So, March 12, which is THE challenge, we have to give it our all to try to turn it around.

“The only certainty I have is that we’ll be ready on March 12. I think we’ve got a good chance of going through. We must turn what happened in Madrid into an opportunity to do something extraordinary.”

Allegri also appeared to deny any suggestion that Juve’s recent setbacks have made him question his future at the club.

“I’ve enjoyed myself so far at Juventus, as we won eight out of nine trophies in Italy. I’ve had fun. The moment I no longer have fun is the moment I stop,” he said.

Check this out  Eintracht Frankfurt negotiating deal for free-agent Boateng

“Life is like that, you need ups and downs for it to be interesting. It’s not as if the Scudetto is just handed to us.”

Allegri plans to rest some of his key players against Bologna, with Miralem Pjanic likely to miss out with illness and Cristiano Ronaldo perhaps to be left out.

“Pjanic is half-dead right now and was being practically given the last rites, so I currently have two-and-a-half midfielders!” said Allegri.

“I need to assess whether to rest Cristiano Ronaldo. The only thing I know for sure now is that Mattia Perin will start. Giorgio Chiellini needs to be assessed, too. Joao Cancelo will play.”