The head of China’s government-run Buddhist association quit his post on Wednesday amid an investigation into allegations that he coerced several nuns into having sex with him.

Xuecheng, a Communist Party member and abbot of the Beijing Longquan Monastery, is one of the most prominent figures to face accusations in China’s growing #MeToo movement.

In a 95-page report that circulated online late last month, two monks accused Xuecheng of sending explicit text messages to at least six women, threatening or cajoling them to have sex with him. 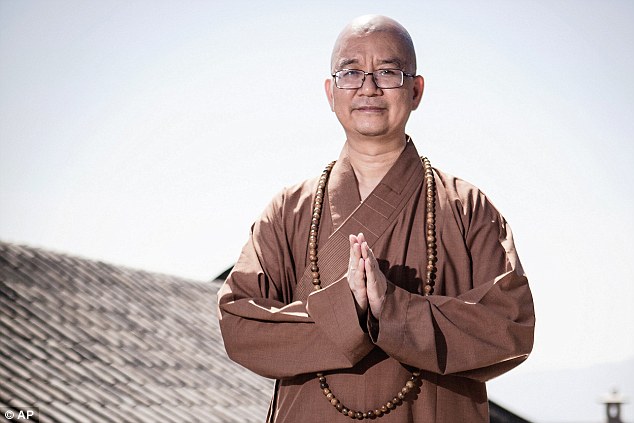 Last month two monks accused abbot Xuecheng of sending explicit text messages to at least six women, threatening or cajoling them to have sex with him

China’s top religious authority launched an investigation shortly after the allegations were made public.

Check this out  Wellness journal by Drs Chris and Xand van Tulleken could improve diet, mood, sleep and strength

Xuecheng stepped down at a meeting of the Buddhist Association of China on Wednesday and passed his duties to a deputy.

‘The council accepted Xuecheng’s resignation as president of the Buddhist Association of China,’ said a statement posted Wednesday on the association’s website.

It was tucked into a long report detailing a council meeting which neither elaborated on the abbot’s reasons for quitting nor referred to the recent probe.

The same statement was also posted by the State Administration for Religious Affairs, the government body overseeing religious groups.

A prominent personality in Chinese Buddhist life with a social media following of millions, Xuecheng’s Twitter-like Weibo account has been silent since August 1, when he posted a statement rejecting allegations of sexual misconduct.

His monastery, Longquan, located in the outskirts of north-west Beijing, is popular with educated Chinese, including many who give up high-paying jobs to devote their lives to religious study. 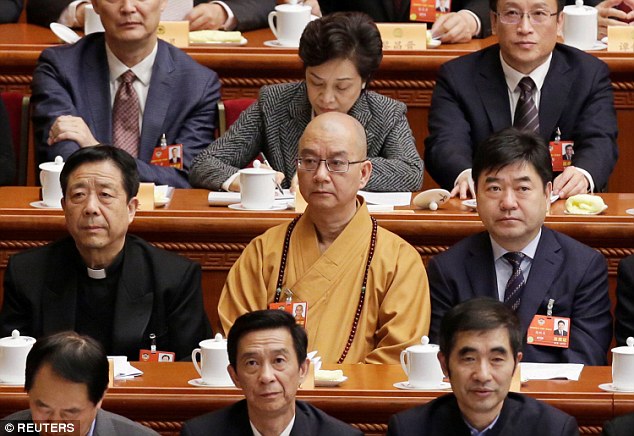 Abbot Xuecheng is head of the Buddhist Association of China and a member of China’s top political advisory body. He is seen attending an opening session of the Chinese People’s Political Consultative Conference (CPPCC) at the Great Hall of the People in China in March

In their report, the two monks, who are no longer members of the monastery, said four women gave in to Xuecheng’s demands.

One of the authors said on social media that he was compelled to speak out after the victims were ignored by authorities who said they could not investigate the matter.

The report and posts about it have been taken down or censored on social media.

There is no legal definition of sexual harassment in China and no national regulations on how to handle sexual assault cases in schools and workplaces.

The #MeToo movement ignited in China earlier this year with more women starting to open up about sexual assaults, especially on university campuses.

Unlike in the West, where #MeToo has forced resignations and sparked widespread public debate, authorities in China have sought to control the discussion, sometimes allowing and at other times censoring social media commentary.

China has roughly 250 million Buddhists. That number is likely growing fast at a moment when some young Chinese are turning increasingly spiritual – and embracing Taoism, Christianity and Islam as well.