She comes from a close, happy, middle-class American family, says her prayers before every meal, was a bit disappointed to get a B in a science test this week and has a huge poster of her idol Serena Williams on her bedroom wall at home in Florida.

She is also the youngest player ever to qualify for Wimbledon, despite barely having played on grass before, and, this week, after her spectacular 6-4, 6-4 victory over Venus Williams, John McEnroe said he’d be staggered if she isn’t World No 1 by the time she’s 20.

According to her parents, Corey and Candi, their daughter was always different.

When she was three, they took her to watch their niece training on an athletics track in their native Atlanta. The minute Coco saw the runners, she hopped out of her pushchair and sprinted after them. 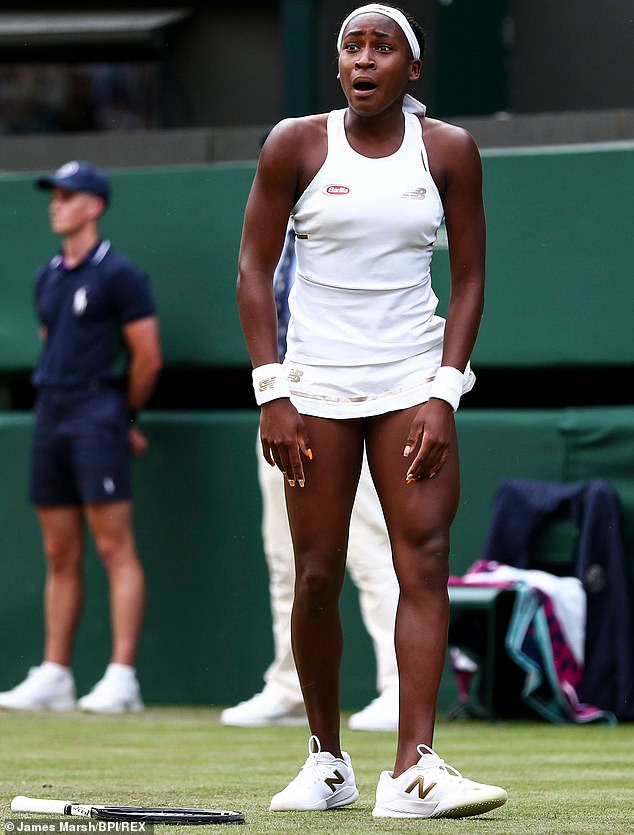 Cori ‘Coco’ Gauff, 15, is the youngest player ever to qualify for Wimbledon, despite barely having played on grass before, and, after her spectacular 6-4, 6-4 victory over Venus Williams, John McEnroe said he’d be staggered if she isn’t World No 1 by the time she’s 20 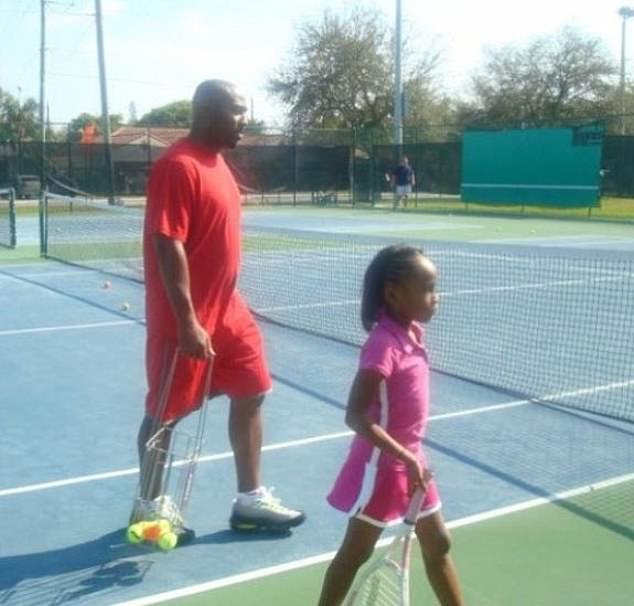 According to her parents, Corey (pictured with Coco) and Candi, their daughter was always different

‘In the end, she must have done at least three laps of a 400 metre track. At three years old. I knew then, you could see, there was something there. Who does that?’

The same girl who, just three years later, decided she would become the GOAT (Greatest Of All Time).

‘She was six years old and I think I was watching the Australian Open,’ explains Corey. ‘Serena [Williams] won and they were saying she’s maybe one of the greatest of all time. She said: “I want to be the GOAT.”

‘I never changed her mind. Parents talk you out of dreams sometimes.’

Not these parents. Perhaps because sport has always dominated their lives. Both were athletes in their college years — Corey, a professional sports coach, was a basketball player at Georgia State. Meanwhile, Candi was a gymnast, high school champion heptathlete and, later, a track star at Florida State.

From the moment their daughter could run, Coco loved football, gymnastics, basketball, athletics and dance.

Tennis — a fun, scaled-down version with big racquets, foam balls and a smaller court — came relatively late, when she was five.

(By contrast, Maria Sharpova, who won Wimbledon at 17, was hitting balls with a sawn-off tennis racquet for hours a day in rain, bitter cold and snow in Russia from the age of four.) 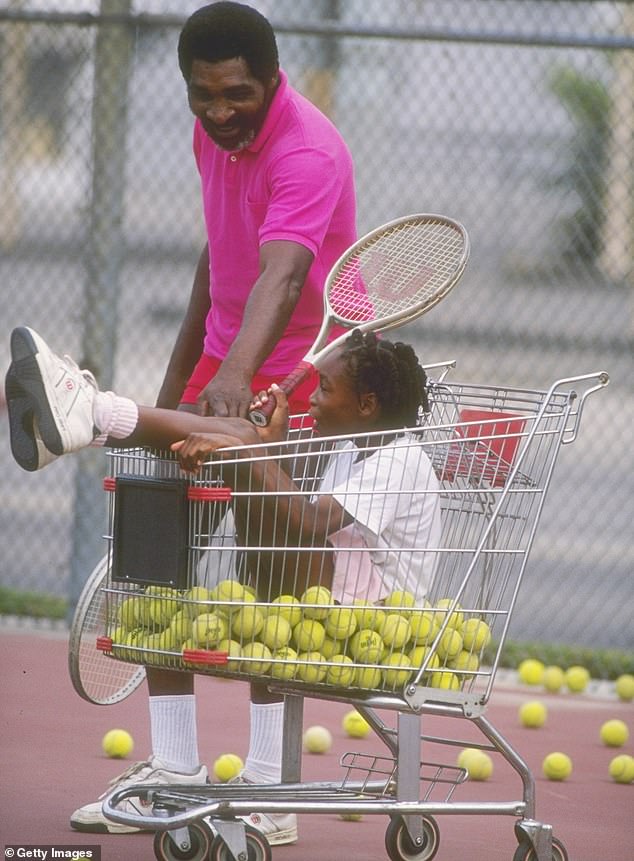 August 1990: Richard Williams pushes his daughter Venus around in a shopping cart during practice

Coco was a natural, with an astonishing work ethic. She immediately stood out.

‘One thing we noticed was she had a unique ability to actually concentrate for 15 to 20 minutes,’ says Corey.

The U.S. teen stars she WON’T want to copy

Set up a childrens’s charity and in 2006 she found peace after being ordained ‘Sister Andrea’ into the Order of Domincan Nuns, in Florida. 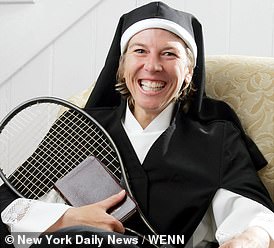 From 1981 a series of chronic injuries and a car accident forced her to take time out for long periods.

Unsuccessful comeback attempts in 1993 and 1994 prompted her retirement that year.

After retirement she became a commentator and today lives in Rolling Hills, California, with husband Scott Holt and their three sons. 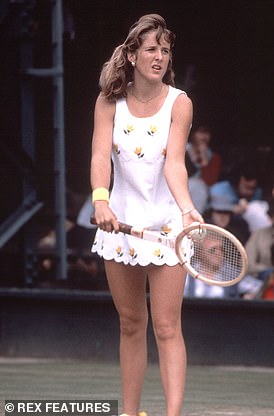 Jennifer Capriati, 43, considered one of the greatest tennis players of all time.

In a 2007 interview she said: ‘I can’t even stand my own skin’ and in 2010 she was admitted to hospital following a drugs overdose, which her family insisted was an accident involving prescription medication, rather than a suicide attempt. Today lives quietly in Florida. 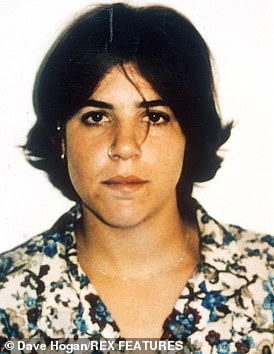 In 2010, Jennifer Capriati was admitted to hospital following a drugs overdose,

But they continued to encourage other sports. ‘I didn’t value the idea of playing tennis all day,’ he adds. ‘I thought she’d get fatigued. I didn’t want to overdo it — I wanted her to play other sports.’

Eventually, though, when she was eight, they felt they had to take a chance on Coco’s talent and uproot the whole family to Delray Beach, Florida, a junior tennis haven and professional-tennis incubator, where the Williams sisters had trained with their father.

It was a huge risk. Having a sporting prodigy as a child is a terrifying responsibility for any parent. So often, the road ahead is littered with pitfalls, injuries and crushing disappointments. But they have done their best to protect her.

In June 2016, Corey left his job as head of sales at pharmaceutical company Remedy to support Coco, and he still coaches her now — though she also trains at the academy of Serena Williams’s coach, Patrick Mouratoglou.

‘To be a dad and a coach is an incredibly hard balance,’ says Corey. ‘It’s one of the most challenging things I’ve ever done, and I’m still learning. I try to be only positive.’

As well as honing his daughter’s technique, style, stamina and drive, he tries to nurture her spiritual side. ‘First and foremost, we are very spiritual people, so you have to be spiritually in tune with whatever you believe: that’s going to be the guiding principle behind your development, how much you believe and how much you pray on what you’re trying to accomplish,’ he said.

According to Coco, they often pray together before a match: ‘We don’t really pray for victory, we pray for myself and my opponent to stay safe.’

Of course, Coco is not a normal teenager and never will be. But, to ensure some sort of life/tennis balance, she is home-schooled, partly by her mum and through a ‘virtual’ online school, and her training schedule is designed to allow for plenty of ‘mucking-about time’ at home with her brothers and family meals.

It seems to be working. Over the past few years, Coco has smashed record after record.

In 2012, she won the ‘Little Mo’ 8-under Nationals. Two years later, aged ten, she became the youngest champion in history to win the USTA Clay Court National 12-under title.

Aged 13, she became the youngest U.S. Open girls’ singles finalist since the event began in 1975. Last year, she also won the French Open Juniors at 14.

With success has come sponsorship deals thought to be worth $1million with Head, New Balance (after winning a bidding war with Nike) and Barilla, plus an unlikely friendship with Roger Federer, who gave her a pep talk when she lost the first round of the Australian Open junior last year.

Check this out  Mother of British schoolgirl, 14, tipped to win $1m America's Got Talent first prize tell of pride

‘The next tournament was the French Open and I ended up winning, so I guess it helped,’ she says. (She is one of only 70 people Federer follows on Instagram.)

And, of course, now Wimbledon and the despatch of one of her great idols, Venus Williams — the competition’s oldest player and winner of seven Grand Slams — with her 120 mph serves, glorious ground strokes and delicate lobs.

After the epic win, Coco sank on one knee in prayer, politely thanked a shocked Venus for being her hero, for inspiring her, for showing her everything was possible.

‘I wouldn’t be here without you!’ she said, and burst into tears — the first time she’d cried since watching Iron Man die in the recent Avengers Endgame film. ‘I wasn’t surprised that I won,’ she later explained. ‘I was just overwhelmed.’

Her phone, meanwhile, went into meltdown.

‘My grandma called me. My brother called me and said he’s going to brag to all his friends. He texted me: “Happy 40K followers” because I gained some [on social media] after the match.

‘All my friends are texting me. I’m going to be up all night trying to respond to everybody!’

Next she will play the former semi-finalist Magdalena Rybarikova in the second round and she has high expectations for the tournament. ‘My goal is to win it . . . I’m still not 100 per cent confident, but you have to say things. People limit themselves too much. I like to shoot high.’

Indeed, alongside the poster on Coco’s wall of her heroine Serena (whom she has met three times), there is one other: a picture of herself. ‘It’s a cover from Delray Beach Magazine,’ says Candi. ‘They had her on the cover when she was 12.’

Of course, Coco is not the first precocious teen to lob, volley and smash her way into the history books. Martina Hingis, Jennifer Capriati, Andrea Jaeger, Monica Seles, Maria Sharapova — the list goes on, and, as we all know, things have not always ended well.

Just like them, Coco is blessed with an extraordinary talent and a ferocious drive and determination. But I suspect her real fortune lies in her family, who keep her grounded, loved and supported.

Let’s just hope they — along with everyone else in the tennis world — continue to protect and nurture not just Coco the tennis star, but Coco the teenage girl, too. 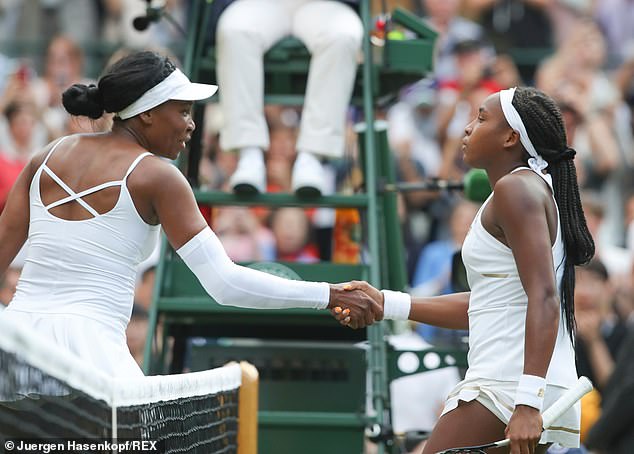 ‘She was six years old and I think I was watching the Australian Open,’ explains Corey. ‘Serena [Williams] won and they were saying she’s maybe one of the greatest of all time. [Coco] said: “I want to be the GOAT.”