A couple’s wedding photo has been slammed online because it shows the bride and groom locked in an embrace at the chilling ‘hanging wall’ from The Handmaid’s Tale while flanked by robed figures.

Newlyweds Kendra Munro and Torsten Mueller’s shoot with Van Daele and Russell Photography in their native town, Cambridge in Ontario, has gone viral.

As Cambridge is where many scenes from The Handmaid’s Tale are filmed, the couple decided to reference the dystopian TV drama by posing beside the hanging wall – where the bodies of executed men and women are displayed – and the photographers Photoshopped in figures in distinctive red robes as a finishing touch. 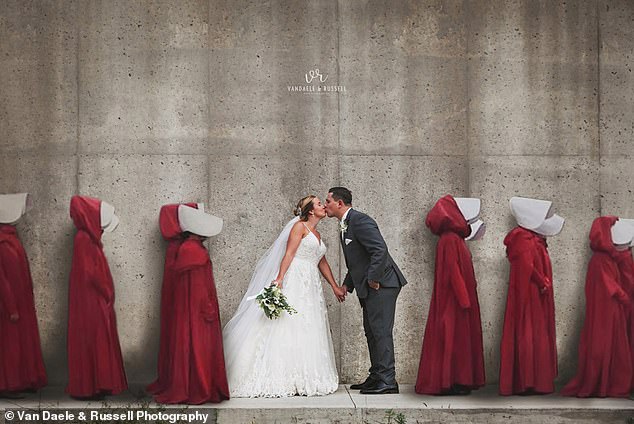 Reaction: The photographers said the newlyweds are ‘overwhelmed and distraught’ over the outcry as a result of their The Handmaid’s Tail-themed wedding photo 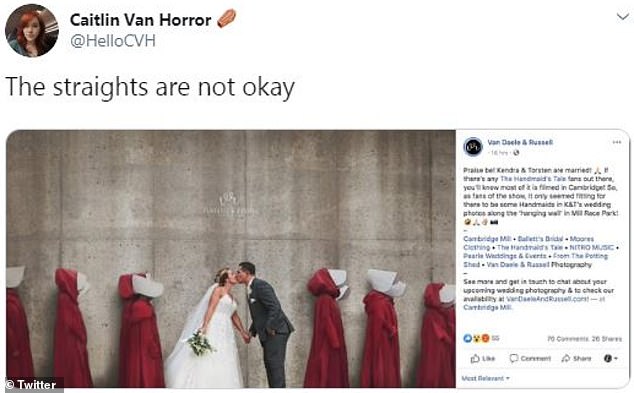 Viral: When the photo was shared to Twitter, it was condemned by hundreds of people for ‘missing the point’ of the show 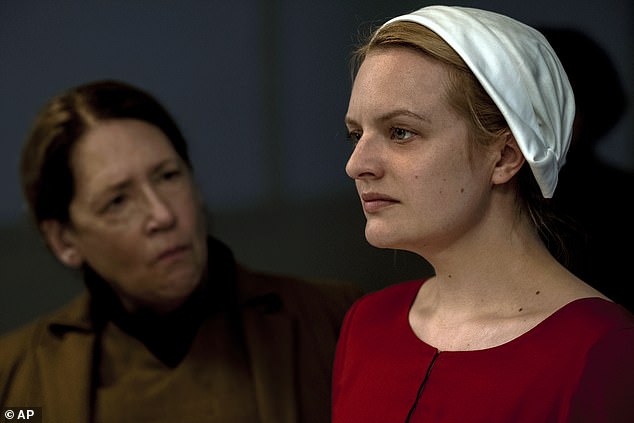 A New York-based writer shared a screen grab of the shoot on Twitter, where it proceeded to go viral and get picked apart by users on the platform.

‘Sounds like some fans who missed [the entire f**king point],’ read one response.

‘Oh god how can you misunderstand something to this degree,’ said another.

Hundreds of people chimed in with statements of disbelief, shock and anger.

While sharing it on Facebook, one user wrote, ‘Absolutely damn not. Human subjugation is not a ‘theme’ for a wedding.’

‘Wow, this is deeply disturbing. ‘Praise be’? Seriously? I love the show, but this photo is truly puke-worthy,’ said another Facebook commentor.

Absolutely damn not. Human subjugation is not a ‘theme’ for a wedding

Photographers Shawn Van Daele and Clint Russell told DailyMail.com that they have shot at the location many times.

‘As Clint and myself are actually a gay married couple, the image and entire show touches on the oppression faced by the gay community, women and many other minority groups. It’s deeply personal, and a shame people are attacking without first learning.’

‘If The Handmaid’s Tale posted it themselves, it would be an entirely different reaction from everyone,’ Shawn added.

‘The couple as well as ourselves are huge fans of the TV show and the book. Anyone who would put out an image like this without understanding what it implies has bigger problems than upsetting people on social media.

‘I knew when creating the image that it would possibly upset people, but that’s sort of the point…to wake people up.

‘The groom wanted photos on the ‘hanging wall’ which is where we were taking their wedding photos; I joked about adding in some handmaids (since it seemed the natural thing to do since we were there. I’m certain any ‘creative’ or photographer would have the exact same thoughts. 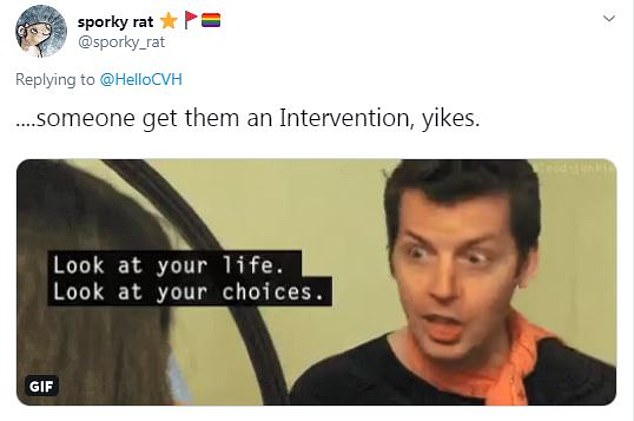 Confusion: Twitter users were downright confused as to how the married couple thought the shoot at the wall was appropriate

‘We didn’t expect the photo to go viral, but we are so happy it has because hopefully it will wake people up to how they too contribute to the oppression and hatred that they’re rightfully worked up over,’ he said.

Shawn said that the couple did not have a themed wedding, this was one photo in a series of thousands of regular shots from their big day.

‘It happened quickly in passing as a nod to the show and the venue, since it is filmed where they were married. It was intended mostly as a keepsake for them. We know we are all good, compassionate people who don’t feel the need to defend ourselves from the conclusions everyone is jumping to. We absolutely understand the gravity of the show’s message, which is why we love the show so much – as terrifyingly real as it is becoming more and more every day (specifically from what we see in Canada happening in the US).’

‘Everyone loves a good witch hunt…apparently today we are their witch,’ he concluded.

Shawn added that the couple are extremely upset at the reaction and that the bride has been left in floods of tears.

‘K and T are rightfully overwhelmed and distraught right now, despite previously loving the photo, since it’s from one of their favorite shows. Having the world try and ruin their wedding day and paint them out to be horrible people (there are people of every race, color and sexual orientation in their wedding party) is a little disheartening.’

Misunderstood: Comments questioned how the couple could have not taken the show’s often harrowing story lines into account

One person wrote on Twitter, ‘A white woman cosplaying oppression on her wedding day..this is too much.’

‘Did they……..did they not watch the show,’ questioned another.

The Handmaid’s Tale, based on Margaret Atwood’s 1985 novel of the same name, stars Elisabeth Moss, Yvonne Strzechowski and Joseph Fiennes as members of the fictional totalitarian society of Gilead, where imprisoned women are raped by married men in acts of ‘fertility rituals’ when they are unable to conceive children with their own wives.

The wall is particularly symbolic and offensive, as women are often hung there after they have been killed for disobeying the laws of Gilead by committing infidelity, being unchaste or attempting to escape.

Another social media user said, ‘I’ve never in my life seen someone so incredibly dense to have missed such a huge point… And to make the premier photo at ‘the wall’ no less… Just absolutely stunned right now.’

In response to the outrage as the photo was shared 1,300 times on Facebook, the photographers told commentors that they themselves are ‘gender traitors’ (a term used in the book for people who are gay).

They added that the images are intended to provoke anger and ‘get people out on the streets’ marching ‘in the real world’ instead of ‘binging on the show’.

Photoshopped: Tweeters wondered if the figures in red were real people, but the photographers confirmed elsewhere that they were Photoshopped in

Shawn posted, ‘To all who are upset by this image: We actually totally agree! Mission: accomplished! Everyone is talking about this issue now, rather than binging on a television series and then not doing anything about what they’re so worked up over until the next season comes out in the spring.

‘What’s sad is that the oppression and hatred, the division, fear and breakdown of humanity and compassion is being perpetuated in every one of these comments.

‘Take a step back and consider you may not actually know the facts, either – that this image was created and put out by a pair of ‘Gender Traitors’ who are no strangers to many of the subplots of oppression, violence, and inequality that run through Margaret’s brilliant work.

‘What’s sad is that everyone is reacting exactly as expected – just like in Gilead – and missing the opportunity to think for themselves, to educate themselves and become engaged activists instead of simply keyboard warriors.

‘We’d love to see you out in the streets participating in women’s marches, supporting equal rights for everyone regardless of their sexual orientation, and so many other important causes, instead of sitting here scrolling through Instagram, knee-jerking your way through comments.

Hometown: One woman from Cambridge said she had witnessed others echoing this trend by taking The Handmaid’s Tale-inspired photos at other locations in the area

‘So you’re correct – it’s gross, disgusting, and a horrible reality that is rampantly becoming more ‘real’ in the world day by day – and comment by comment.

‘There’s no more ‘us’ – only division and hatred, and no more curiosity to learn, to help, to actively become engaged in correcting humanity’s breakdown instead of instantly attacking. Congrats for adding to that today!

‘Why exactly are you offended? Have you asked yourself? And what are you actively doing about it in the real world? We’re thrilled that this is starting a conversation! 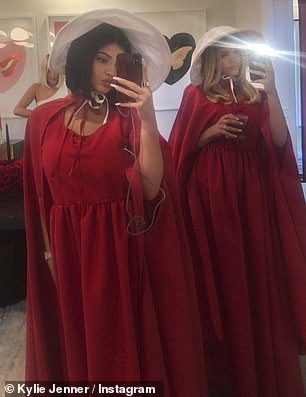 Condemned: Kylie and Sofia Richie pictured at the party which was condemned by online commentors for ‘celebrating female enslavement’

‘Thank you for being moved by an issue that deserves much, much more attention. And don’t forget – if this had been a happy couple surrounded by superheroes like Batman and Superman, you wouldn’t have even stopped scrolling to comment.

‘June – along with every fighting Handmaid or human in the midst of struggle and oppression – is the ultimate superhero.’

The wedding shoot comes several months after reality starlet Kylie Jenner was dragged on Twitter for throwing a The Handmaid’s Tale-themed birthday party for her friend Anastasia Karanikolaou.

‘You know The Handmaid’s Tale is my favorite show ever… so for Stassi’s birthday … welcome to Gilead,’ Kylie captioned a video showcasing the party decor back in June.

It was quickly deemed ‘bad taste’ by online commentors.

‘I honestly believe Kylie Jenner did NOT understand The Handmaids Tale if she’s throwing a themed party about it,’ said a user.

‘Kylie Jenner is having a party themed after the Handmaid’s Tale….so…who’s gonna tell her that the party is literally celebrating female enslavement for their biological reproduction?? WHO IS GOING TO TELL HER,’ said another.

Days later, actor Bradley Whitford, who plays Joseph Lawrence on the Hulu series, agreed that it ‘seemed a little tacky’ when asked about it on a chat show.

The lingerie website Yandy was also forced to recall a ‘sexy’ Handmaid Halloween costume last year due to outrage over the garment.