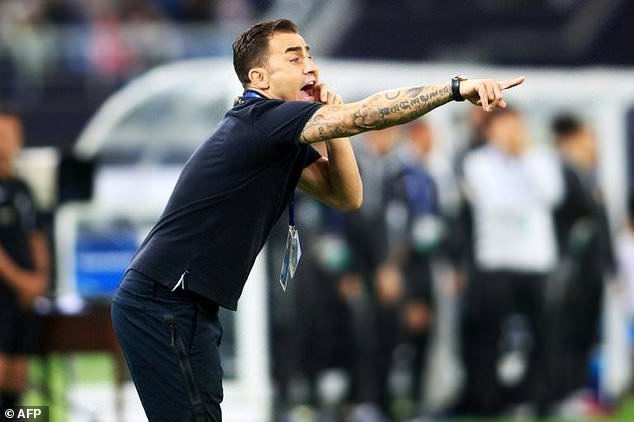 Fabio Cannavaro’s Guangzhou Evergrande face a critical five days that could go a long way towards deciding who wins the Chinese Super League’s most closely contested title race in years.

The stakes could hardly be higher for the Italian World Cup winner, as failure to steer Evergrande to an eighth successive CSL crown would put his job under severe scrutiny after only a year in charge.

With a third of the season left, Beijing Guoan lead the CSL, two points clear of Shanghai SIPG and three ahead of Evergrande — and with a game in hand over both.

Cannavaro’s side host the capital club on Friday knowing they could go top with victory, then travel to SIPG on Tuesday.

The title chase is too close to call but Evergrande have impetus after dragging themselves back into contention thanks largely to the July loan signings of Brazilian midfielders Paulinho, from Barcelona, and Anderson Talisca, from Benfica.

Evergrande needed a 91st-minute winner to defeat mid-table Shanghai Shenhua 2-1 in their last match and Cannavaro is pleading for home fans — so used to success, after dominating the CSL for the best part of a decade — to stay patient.

“The supporters hope to win every game 4-0 or 5-0,” said the former world player of the year, after Evergrande’s last-gasp victory.

“But fortunately we are still in the title race and have not been left behind,” Cannavaro added, praising the unity and will of his team.

Cannavaro, Italy’s captain and defensive stalwart in their 2006 World Cup victory, will hope that his domestic players do not suffer a hangover from the international break.

Three of his men started China’s drab 0-0 draw with Bahrain on Monday, a hugely disappointing result which sparked another bout of soul-searching about the under-achieving national side.

That followed a similarly demoralising 1-0 defeat to Qatar, but Cannavaro said in the build-up that playing for China under his fellow Italian coach Marcello Lippi would be beneficial for his players — “to hear a different voice other than mine”.

Evergrande go into the clash with Guoan in rampaging form, winning eight of their last nine CSL matches and averaging nearly four goals per game.

Only Guoan have scored more goals this season but Roger Schmidt’s side are unconvincing at the back, suggesting that a goal-fest could be in the offing for an anticipated crowd of about 50,000.

It is then off to Shanghai for Cannavaro’s men and the visit to SIPG, home of the expensive Brazilian duo Hulk and Oscar.

SIPG coach Vitor Pereira took over from his fellow Portuguese national Andre Villas-Boas this season, vowing to do what the former Tottenham Hotspur and Chelsea manager failed to achieve — win a trophy.

The CSL is Pereira’s last chance after SIPG exited the Chinese FA Cup and the Asian Champions League.

Like Cannavaro, Pereira has little room for further error.