A bewildered baby elephant struggles in a wire crate as she begins her journey from the wilds of Africa to lifelong captivity in a zoo on the other side of the world.

The five-year-old animal, just removed forcibly from her mother, is being kicked in the head by one of her booted captors and slapped with a stick as she is tied down by two taut ropes.

She is groggy from the tranquillisers pumped into her to make her docile. Her fight for freedom is hopeless.

This distressing picture, taken just over a year ago in Hwange National Park, in Zimbabwe, has become the symbol of a controversial debate over Africa’s animals. 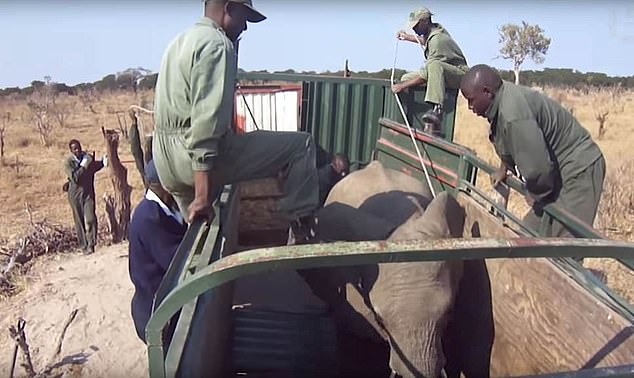 Not your average salesmen: Workers kick at one baby elephant forcing her to comply and move into a transport truck

The highly sensitive issue is whether the continent should be free to look after and even sell its own wildlife in the way it wishes, or be forced to bow to Western conservationists, rich celebrities and royals who say elephants must remain in the lands where they are born and be protected.

Next week, the sale of wild elephants such as the five-year-old, and the even more contentious trade in their tusks, will top the agenda in Switzerland at the Convention on International Trade in Endangered Species (CITES).

This is the organisation that sets worldwide rules on the sale of wild animals and their products. And impoverished Zimbabwe, which UN officials said last week was ‘marching towards starvation’, will be anxious to hear what CITES says.

In the past few years, Zimbabwe has made £2.2 million from the sale of 97 elephants — including the baby female pinned down in the crate — to zoos, parks and other tourist attractions in China and Dubai in the United Arab Emirates.

And more deals are in the pipeline because Zimbabwe has announced it will sell the creatures ‘to anyone’.

With a price tag of up to £34,000 per elephant, the trade has provided welcome income for a country where a third of the 15 million population survive on food aid, drought has hit hard and inflation is the second highest in the world, after Marxist-run Venezuela. 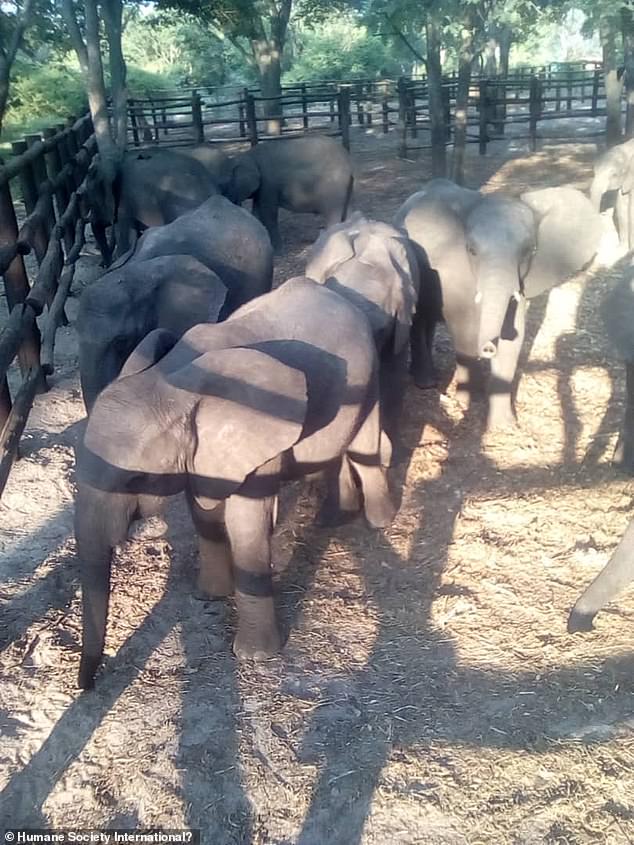 Through the sales of elephants at £34,000 each, Zimbabwe has managed to secure £2.2million

No wonder Fulton Mangwanya, the director of Zimbabwe’s Parks and Wildlife Management Authority, said of the elephant sales: ‘We are fighting tooth and nail so that we are allowed to trade in our wildlife. The main contentious issue is the elephants, which we feel we are not allowed to fully benefit from.’

Tinashe Farawo, a spokesman for the same authority, added: ‘We are struggling with a ballooning number of elephants. We have 84,000, with only a capacity for 50,000. So we sell elephants to take care of the rest.’

He declared that elephant numbers were out of control: 200 people had died in attacks by the creatures in the past five years and they had destroyed 17 million acres of crops. ‘We are selling because we need to manage the numbers,’ he said. ‘We need to rescue people from the elephants.’

Zimbabwe’s views are echoed by officials in neighbouring Botswana, which has 130,000 elephants, the world’s largest population and a third of Africa’s total. It has just lifted a ban on hunting to manage the escalating population and safeguard people’s lives.

In an angry salvo, Botswana’s President Mokgweetsi Masisi said: ‘We are just being rational, as any Brit would be if there were thousands of elephants marauding over the UK. This criticism is a racist onslaught.

‘They (Western conservationists) speak as if there are no human beings here, as if it’s just a big zoo and they are the keepers of that zoo. We have to protect people and property. We are a sovereign state and we don’t have to be arm-twisted by Western countries that talk as if elephants are the only important thing. We cannot continue to be spectators while others make decisions about our elephants.’ 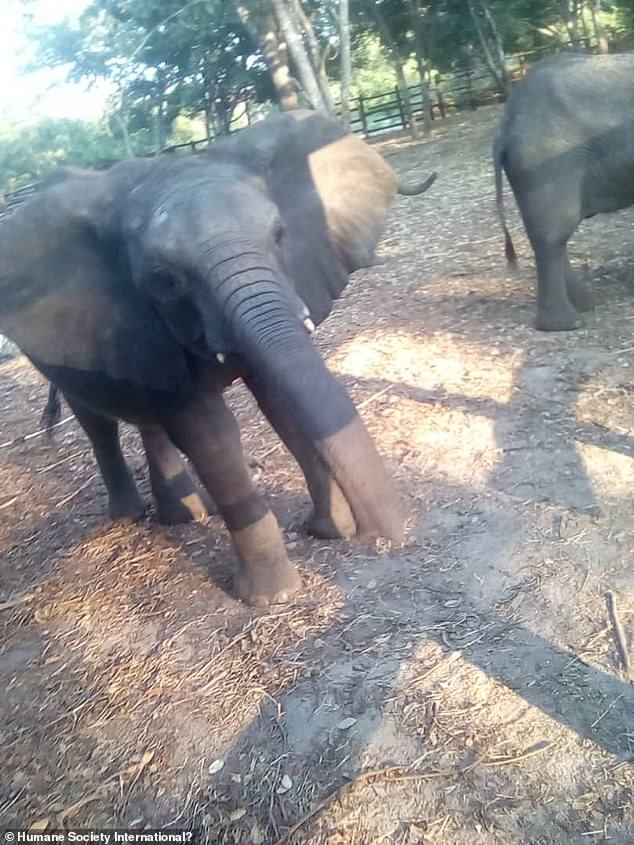 Namibia’s President, Hage Geingob, has also condemned Western dabbling. Looking back into our very distant past, he said recently of Western conservation lobbyists: ‘If they are from Europe or the United States, I want to ask them how they destroyed all their elephants but come to lecture us.’

This growing antagonism in Africa towards Western influence — some say downright interference — in its wildlife affairs will come to a head at the CITES summit when Zimbabwe, Botswana and Namibia, which have 60 per cent of Africa’s elephants between them, raise their voices.

They will argue that they should be allowed to sell huge government stockpiles of elephant ivory, resulting from the natural death of animals, that has been collected over years.

Zimbabwe estimates this could raise nearly £300 million to spend over the next 20 years on management of the country’s ten national wildlife parks and help people plagued by elephants. The country will also argue against any new CITES restrictions on its wild elephant sales.

Ivory sales by African nations is a vexed subject. Forty years ago, there were a million elephants in Africa, but the numbers have now fallen to little more than 400,000. In the 1980s, poachers slaughtered half the continent’s population, selling their ivory to a ready market in Asia, particularly China.

(With nearly 1.4 billion people, China has for centuries been the world’s biggest consumer of ivory — every Chinese citizen traditionally had an ivory seal to print their name, every home had ivory chopsticks, and countless gift shops sold ivory figurines and jewellery.)

At the height of this crisis, in 1989, CITES agreed a worldwide moratorium on international ivory sales, ending the legal tusk trade.

Although China last year bowed to international pressure and banned all its domestic trade in what the Africans call ‘white gold’, old habits die hard there. Hong Kong promised to follow suit, but Thailand, Laos and Vietnam continue to operate internal ivory markets with a roaring demand.

The tragedy is that Africa still loses up to 15,000 elephants to ivory poaching every year. One is killed there every 25 minutes. As a result, herds of the intelligent creatures have gathered in what are regarded as safer countries that clamp down hard on poachers — Botswana, for instance. And it is this that has provoked a frightening conflict with humans.

Conservationists argue that if CITES bows to Zimbabwe’s demand to sell its valuable ivory stocks, it will have a ‘catastrophic effect on elephants throughout Africa’, opening the floodgates by allowing poached tusks to enter the market more easily, as it is hard to tell legal ivory from illegal.

Interpol, the international police watchdog, says the money made by criminals from poached ivory and wildlife comes close to the fortunes made from trafficking in drugs, arms and humans.

Prince William is one of those who has warned of the plight of African elephants. He is the royal patron of UK-based charity Tusk Trust, which campaigns to safeguard wildlife in Africa and crack down on the ivory trade. Although his office declined to comment to the Mail this week on Zimbabwe’s demand to sell off ivory stocks or increase its wild elephant sales, the Prince warned this year that the creatures may well be ‘gone from the wild’ by the time his four-year-old daughter Charlotte reaches 25. 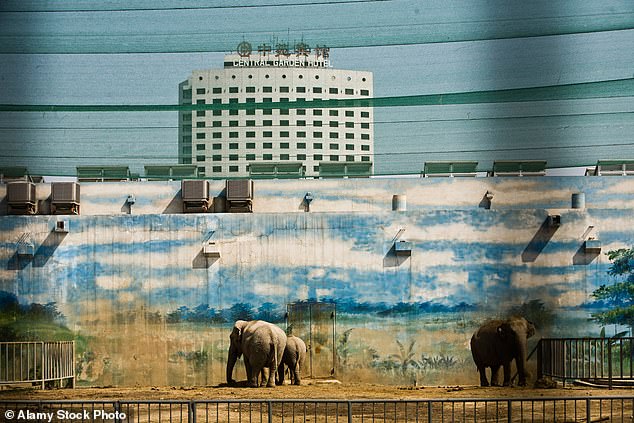 Baby elephants inside a lacklustre pen at Beijing zoo in the chinese capital city, behind the painted backdrop the Central Garden Hotel looms over the three elephants

Yet there are two sides to this sorry story. In parts of Africa where elephant numbers are growing, the animal is hated and locals would love to see the back of it.

They can’t see any benefit in these huge creatures, up to 13ft high at the shoulder and weighing many tons. The elephants at random kill ordinary villagers, farmers and their cattle and donkeys, stomp over crops and trample grain stores, houses, trees and water distribution systems.

Botswana is a case in point.

In June, Ray Chumbo found an elephant tramping about his farm in Tutume, eastern Botswana, near the border with Zimbabwe. The 78-year-old fired several shots from a pellet gun to scare it away, but the wounded elephant charged and mauled him to death.

‘When he made the last shot, the elephant came,’ said Julius Chiabeswahu, a friend who was with Ray that night. ‘Elephants are not good, they ruin people’s fields and pastures. This one had destroyed the irrigation system we had just put in. It might come back and how will I defend myself?’

On the other side of the country in the Okavango Delta, Botswana’s wildlife tourist heartland, another family is in mourning.

Earlier this year, Balisi Sebudubudu, 38, was sent to fetch a cow for slaughter for a meal after his younger brother’s funeral. But he was mauled by an elephant and died. After this double tragedy, the most senior family member, uncle David Sebudubudu, said: ‘If I had money, I would buy four, five or eight rifles and demolish the elephant. You can’t compare the life of a human to that of an elephant.’

Children, too, have been attacked by elephants. A ten-year-old boy, Ontebaganye Ngoma, narrowly survived an attack recently in the village of Gumare.

One afternoon, he and his grandmother, Shimwe, were looking for firewood. An elephant suddenly appeared, scooped up the boy and squeezed him with its trunk. He was only saved by Shimwe screaming and waving her shawl at the animal, which lumbered off. Ontebaganye’s leg was broken and he was bruised. He was taken to hospital, where doctors told the Mail he wasn’t the only child in the area to have been injured by an elephant. Shimwe says today: ‘Unless something is done, I don’t think we will ever be safe.’

The spate of attacks on African villages overwhelmed by elephant numbers has provoked President Masisi to warn that Western conservationists understand little about his country or its wildlife.

He retorted: ‘These people think elephants are pets. It startles and bamboozles me when they sit in the comfort of where they come from and lecture us about the management of a species they do not have.’

Yet few could fail to feel horror at the sight of young Zimbabwean elephants in crates being sedated, kicked and whipped before being transported to faraway places where they have been seen performing cruel tricks at circus events and loud music shows.

Of course, this may not be the fate of the five-year-old. But she will already have endured horrors, if reports leaked by Hwange National Park officials on similar captures are to be believed.

The process is almost always the same. A suitable herd with youngsters aged between five and seven is identified. Then officials in a helicopter pick off these pre-adolescent elephants with a sedative fired from a rifle.

After the little elephants collapse, the pilot dive-bombs the rest of the herd to deter them from coming to the rescue.

When the herd scatters, a ground team approaches the sedated elephants on foot, bundles them up and drags them on to trailers, on which they are taken to a holding pen to be prepared for their overseas flight.

The process is cruel and, to our eyes, repugnant. But the question is whether elephants take priority over people in a continent where humans are starving. And whether the West, from comfy armchairs, should tell Africa what to do.