President Trump says he is in talks with members of congress to impose ‘powerful sanctions’ on Turkey as Turkish President Erdogan continues his attacks on Kurdish militia just one week after Trump pulled U.S. troops from the area.

‘Dealing with @LindseyGrahamSC and many members of Congress, including Democrats, about imposing powerful Sanctions on Turkey,’ Trump said in a tweet Sunday morning. ‘Treasury is ready to go, additional legislation may be sought. There is great consensus on this. Turkey has asked that it not be done. Stay tuned!’

This comes as nearly 800 women affiliated with ISIS and their children fled from a camp where they were being held in northern Syria after a shelling by Turkish forces, the region’s Kurdish-led administration said Sunday.

Trump said Saturday that in response to the Turkish invasion, the U.S. will send $50million in emergency financial aid to Syria. 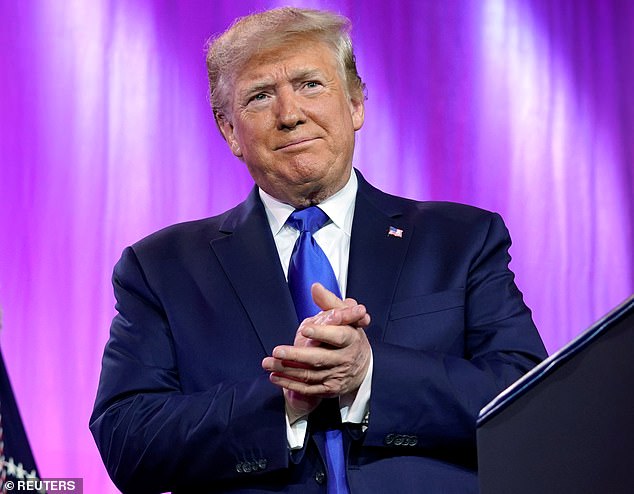 President Trump announced Saturday night that he will send $50million in financial aid to Syria one week after pulling U.S. troops from the area 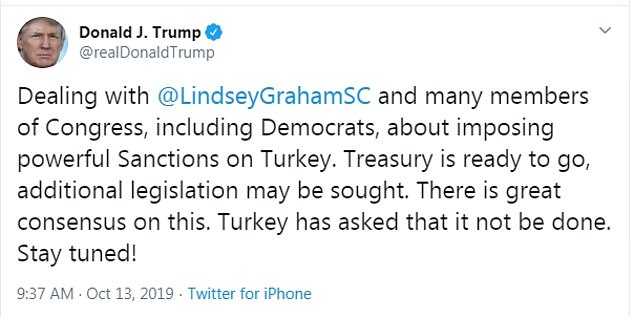 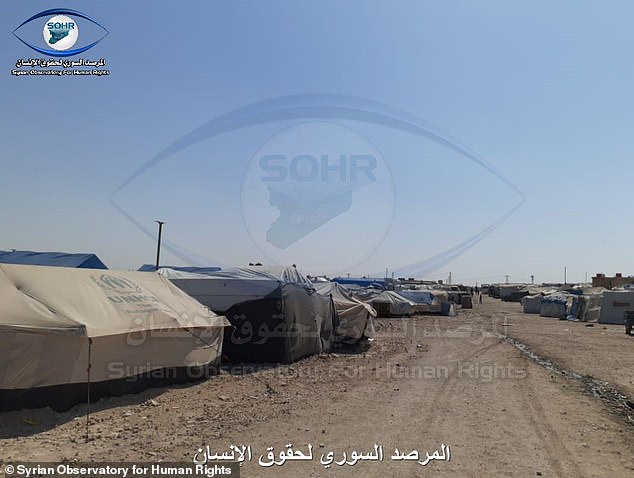 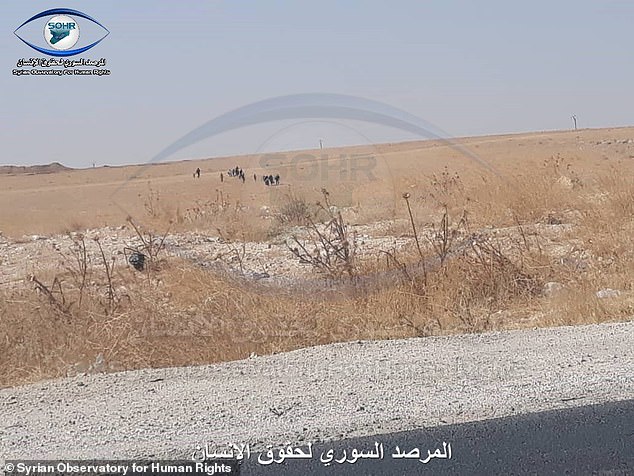 The money will be sent to assist human rights groups and other organizations to ‘protect persecuted ethnic and religious minorities and advance human rights,’ according to a statement released Saturday night by the Office of the Press Secretary.

Trump spoke of the $50million in aid while at the Values Voters Summit’s Faith, family and Freedom gala dinner Saturday night.

‘Other presidents would not be doing that, they’d be spending a lot more money but on things that wouldn’t make you happy,’ he said. ‘The U.S. condemns the persecution of Christians and we pledge our support to Christians all over.’

The statement by the Office of the Press Secretary says the aid money ‘will also go toward increased accountability, removal of explosive remnants of war, community security for stabilization assistance, documenting human rights abuses and international humanitarian law violations, and support for survivors of gender-based violence and torture.

‘We hope regional and international partners will continue their contributions as well. ‘Ensuring the freedom and safety of ethnic and religious minorities remains a top priority for this Administration.’

On Sunday, President Trump defended his decision to pull U.S. troops from Northern Syria, leaving the America’s Kurdish allies to a Turkish invasion, calling it ‘very smart’ for the U.S. to ‘not be involved in the intense fighting along the Turkish Border, for a change.’

‘Those that mistakenly got us into the Middle East Wars are still pushing to fight.They have no idea what a bad decision they have made. Why are they not asking for a Declaration of War?’ he added.

‘Do you remember two years ago when Iraq was going to fight the Kurds in a different part of Syria. Many people wanted us to fight with the Kurds against Iraq, who we just fought for. I said no, and the Kurds left the fight, twice. Now the same thing is happening with Turkey….’ he wrote.

‘The Kurds and Turkey have been fighting for many years. Turkey considers the PKK the worst terrorists of all. Others may want to come in and fight for one side or the other. Let them! We are monitoring the situation closely. Endless Wars!’ 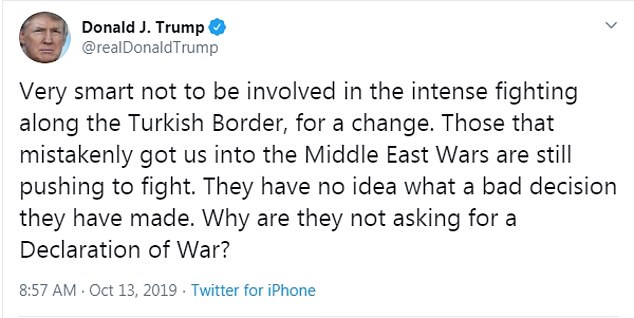 On Sunday Trump continued to defend his decision to pull U.S. troops from Syria, writing: ‘Very smart not to be involved in the intense fighting along the Turkish Border, for a change’ 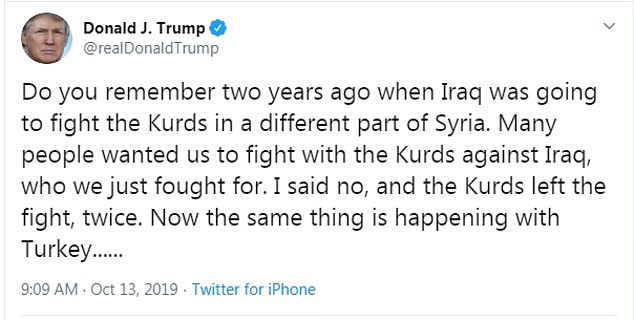 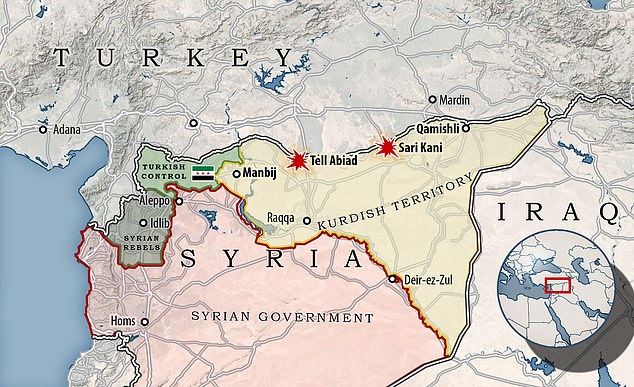 The Kurdish-led administration said in a statement Sunday that 785 ISIS-affiliated foreigners had fled a camp at Ain Issa.

In an apparent reference to Turkish-backed rebels, the Kurdish-led administration said ‘mercenaries’ attacked the camp where ‘Daesh elements’ – a reference to Islamic State – in turn attacked camp guards and opened the gates.

Images shared by the British-based Syrian Observatory for Human Rights appear to show people running away from the camp.

Turkey’s cross-border attack in northern Syria against Kurdish forces widened to target the town of Suluk which was hit by Ankara’s Syrian rebel allies. There were conflicting accounts on the outcome of the fighting.

Turkey is now facing threats of possible sanctions from the U.S. unless it calls off the incursion.

Two of its NATO allies, Germany and France, have said they are halting weapons exports to Turkey. The Arab League has denounced the operation. 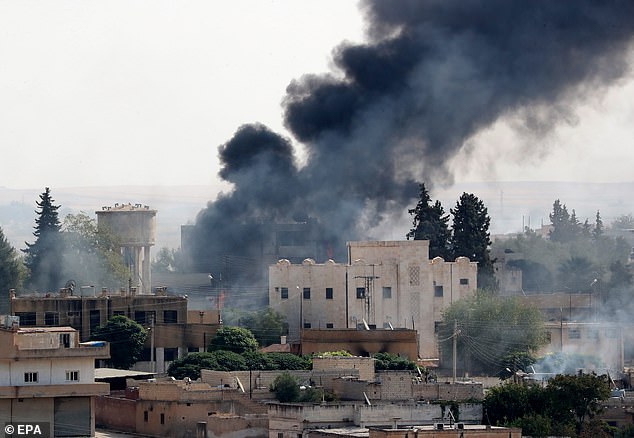 On Sunday, Turkey targeted two border towns with shelling, continuing with the fight against Kurdish militia 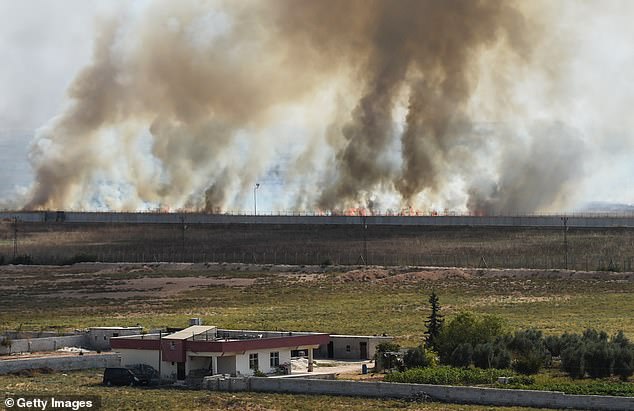 More than 130,000 people have been displaced from rural areas around the northeast Syrian border towns of Tel Abyad (pictured today) and Ras al Ain as a result of fighting between Turkish-led forces and Kurdish militia

France also said today it was ‘worried’ to hear of the report that hundreds of relatives of foreign jihadists had escaped.

‘Of course we are worried about what could happen and that is why we want Turkey… to end as quickly as possible the intervention it has begun,’ government spokeswoman Sibeth Ndiaye told France 3 television.

On Saturday, Former Secretary of Defense James Mattis warned that ISIS will ‘absolutely come back’ with the removal of U.S. troops from Syria.

‘ISIS is not defeated. We have got to keep the pressure on ISIS so they don’t recover,’ Mattis told Chuck Todd on Meet The Press when asked if President Trump made the right decision by pulling troops from Northern Syria last week.

‘It’s in a situation of disarray right now,’ Mattis, who resigned as Secretary of Defense in January, said of the situation between Turkey and Syria. ‘Obviously the Kurds are adapting to the Turkish attacks. We’ll have to see if they can maintain the fight against ISIS. It’s going to have an impact. The question is how much.

‘We may want a war over; we may even declare it over. You can pull your troops out as President Obama learned the hard way out of Iraq, but the ”enemy gets the vote”, we say in the military. And in this case, if we don’t keep the pressure on, then ISIS will resurge. It’s absolutely a given that they will come back.’