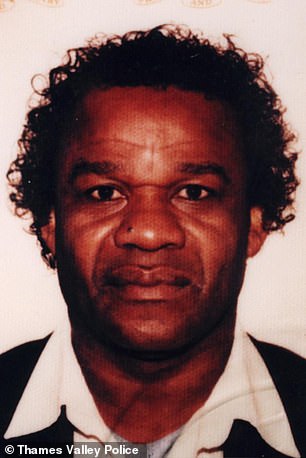 Everett Watson (police mugshot), 52, allegedly carried out a ‘frenzied’ attack on his then-girlfriend in Three Mile Cross, Berkshire in 1993 when he used an iron bar to ‘pulverise’ her head

A body pulled from the River Thames 24 years ago has turned out to be that of a man hunted by police for trying to kill his girlfriend.

Everett Watson, 52, allegedly carried out a ‘frenzied’ attack on his then-girlfriend in Three Mile Cross, Berkshire in 1993 when he used an iron bar to ‘pulverise’ her head.

He then locked her in a caravan where she was found terrified by police, while he went on the run wanted by detectives for attempted murder.

A body was found two years later in 1995 in the Thames near Sonning Lock in Berkshire, around five miles away.

But after two years underwater, the corpse was unrecognisable and it was buried in an unidentified grave.

Police always believed Watson had made a getaway in his girlfriend’s car, but when it was found nearby in 2003 the case re-opened.

In 2018 the body was exhumed for DNA testing and yesterday a coroner ruled it was that of Watson.

Reading Coroner’s Court yesterday heard how Watson, originally from Barbados, had been jailed for eight years in 1988 for attacking church-goers with an axe as they left a service in Reading.

He carried out the assault, which saw one man’s head embedded with an axe, after being dumped by his ex-wife.

He spent just four years in prison before allegedly striking again, this time on his girlfriend after she decided to end things with him as well.

The coroner was told he battered her before shutting her away in a padlocked caravan.

When she was found by police, he fled, and the victim, who has never been named, was put under protection.

In January 1995, a body was pulled from the River Thames at Sonning Lock near Reading.

Police were unable to identify it but ruled it was that of a white man, so never suspected any link with Watson.

Meanwhile, the hunt for him continued and and a fresh appeal was made by Thames Valley Police in 2003 after his ex’s car was found in the River Thames under Reading Bridge, six miles upstream from where the unidentified body had been found almost a decade before.

It was finally exhumed last year when DNA samples taken from the teeth, legs and feet and compared to samples provided by Watson’s estranged wife, his two daughters, and his sister 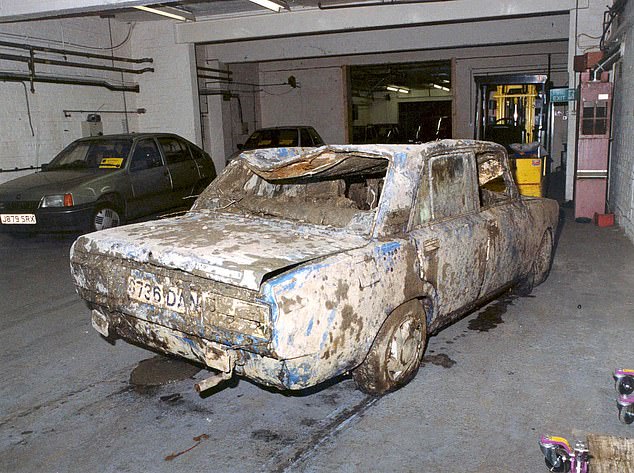 In 2018 a body was exhumed for DNA testing and yesterday a coroner ruled it was that of Watson. Pictured is the car police believed he fled in, but the case re-opened when they found it in 2013

Glendene Boyce, who confirmed the body was his did so with a probability of one-billion-to-one.

Detective Constable Jacqui Redgard was put on the ‘cold case’ in 2018 and pieced the jigsaw together.

She told the coroner the body pulled from the river in 1995 was thought to be a white male but it was a ‘complete red herring’.

Talking to Watson’s family, she found none of them had heard from him since the night of the iron bar attack in 1993 and he had not accessed his bank accounts or registered for a passport anywhere in the UK.

Police had been carrying out inquiries in Barbados, where Watson was originally from, since he had gone missing and his family confirmed he had still not been sighted there.

She said: ‘The body had been in the river for so long the skin had bleached.

‘He also had a sizeable gap in his teeth. Having spoken to his estranged wife, she told me Mr Watson had this gap. There were no dental records to be found, but I had this information.

Check this out  Instagram and Facebook DOWN: Thousands of users unable to refresh their feeds or upload photos

‘It just seemed a little bit too much of a coincidence and the vehicle being so close, only six miles away.’

She said: ‘In this rather unique case, I can now confirm that Everett Watson has died.

‘On March 2 1995, the coroner for East Berkshire recorded an open verdict in this inquest.

‘At that point, the coroner recorded the cause of death as drowning and was not able to give a name to identify the deceased at that time.

‘In order to carry out this investigation, I needed to make an application to the High Court to quash the previous inquest findings. I did this with the permission of the family.

‘The date of death will remain January 2, 1995, we all know it is extremely likely he died well before that.

‘The conclusion remains an open conclusion. I am sure this has been a very long and painful journey for his family.

‘I hope they will take some comfort in knowing he has been formally laid to rest and his name has been restored to him.’