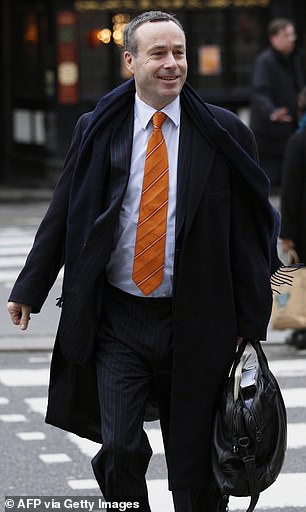 The editor of one of the world’s best known financial titles has announced he will be stepping down from the helm.

Lionel Barber will leave his role as editor of the Financial Times in the New Year, after spending 14 years at the business.

The 64-year-old was appointed editor of the international paper in 2005 and had previously worked at The Scotsman and The Sunday Times.

Check this out  Is Delhi's Diwali firework ban an attack on Hinduism?

He announced his resignation on Twitter this morning, informing his 76,300 followers of the news.

In a tweet he said: ‘After 14 years, I am stepping down as editor in the New Year. It has been a rare privilege and a great pleasure to hold the best job in journalism.’

In a statement sent to colleagues he said it had been a ‘rare privilege and pleasure’ to work at the company.

When it comes to his replacement, deputy editor Roula Khalaf will take up the position, becoming the first female editor of the paper.

She had previously been the assistant editor and foreign editor at the group and is originally from Lebanon.

Barber’s 34-year-career in the news industry will come to an end in January, and he was hailed for ‘transforming’ the paper during his stint.

He started his career in 1985 as a business reporter at the Financial Times. He worked at other newspapers before returning to the group as Washington correspondent, Brussels bureau chief, news editor and US managing editor.

Following the announcement, many took to Twitter to wish Barber luck on his new ventures, with many praising him for the work he had done at the group.

Jo Johnson said: ‘One of the greats! Congrats on an amazing editorship – honour to have had a chance to work with @lionelbarber for 13 fabulous years @FT’.

This is while another user said: ‘You’ve been a source of great inspiration, thanks, and all the best now!’ 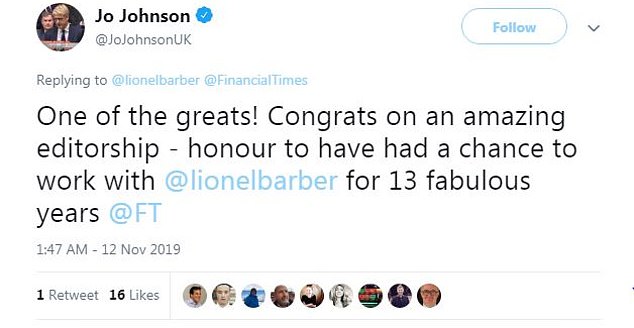 Tweets came flooding in wishing Barber looks on his future work. With some also saying he would be missed

Some encouraged his to enjoy his break, and one user tweeted: ‘Well done Lionel. Enjoy the rest. Though I trust you are not completely putting your feet up.’

Another tweeted: ‘You’ll be missed. Thanks for everything and enjoy more Spurs matches – if you can!’

Aside from the Twitter tributes, the group’s Japanese owner Nikkei also took the opportunity to praise Barber.

Chairman of the group Tsuneo Kita said Barber was a ‘true internationalist’.

He added that he was a ‘strategic thinker’ and that it was ‘sad to see him leave the group’, but hinted that they had both agreed it was time for a new chapter.

In 2015 the group came under new ownership after Nikkei purchased it for £844 million.

It was previously under the ownership of Pearson, of which it had belonged to since 1957.

Back in May the Financial Times started to look for Barber’s replacement, which was decided by executives at Nikkei.