More than 100 people were evacuated from a Flybe flight at Exeter Airport today after an emergency technical problem with the air-conditioning before take-off.

Passengers had boarded the Flybe Embraer plane to the Spanish resort of Alicante and the pilot was preparing to leave when the air in the cabin became hazy.

Two airport fire engines rushed to the plane along with Devon and Somerset Fire and Rescue crews as 100 passengers and five crew members were evacuated. 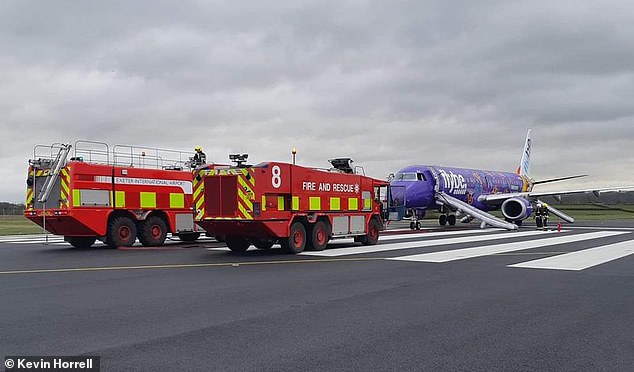 All those onboard BE4321 were returned to the terminal by airport coaches at about 8am. The runway was closed for one hour during the incident but later reopened.

Danny Keating, from Looe, Cornwall, was among the passengers on the plane and going on his stag do to Benidorm when the call came over the Tannoy to evacuate.

He told Heart Cornwall: ‘We’re all on the plane about to take off and the engine makes a loud banging noise and the cabin fills up with smoke.

‘The pilots are shouting over the Tannoy ‘evacuate, evacuate’, which is always good to hear. With that, all the doors get ripped off and the slides open up.

‘People were going down the slides, people flying everywhere. Then me and my brother got either side of the slide and started to help people off down the bottom. 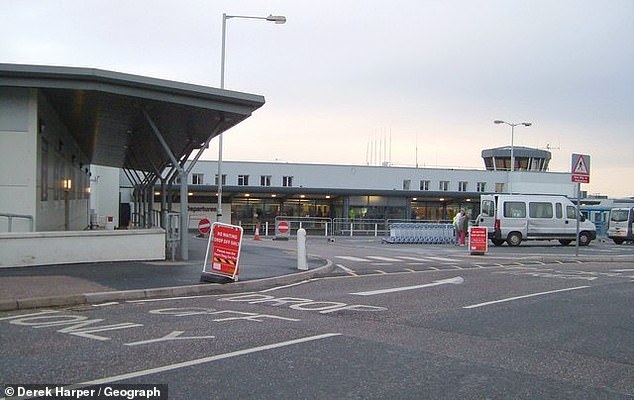 Check this out  Dementia costs crisis deepens after it emerges 770,000 people have been refused state support

‘Something that you can tick off the bucket list, but usually it happens right at the end of your bucket list. It was interesting going down the slides.

‘That’s probably the only positive you can take – well, and that it didn’t happen 30 seconds later when we were in the air. That would have been a little bit worse.’

Kevin Horrell, from Caerphilly, South Wales, posted a picture on Facebook today of two fire engines next to a Flybe plane and wrote: ‘Well, this just escalated quickly.

‘Was looking at my in-flight drinks, could smell fumes, then just had a warning from the pilot ‘evacuate, evacuate’ and I’m sliding down some slide with Robert Wallis.’

Check this out  What they said about Michelle Guthrie

An Exeter Airport spokesman said no other flights were delayed, with a Flybe flight to Manchester experiencing unrelated technical difficulties.

A Flybe spokesman said: ‘Flybe can confirm that the above flight scheduled to operate from Exeter to Alicante experienced haze in the cabin just prior to take off.

‘We are taking the situation very seriously and our immediate concern is for the welfare of all those involved.

‘We are now in the process of making sure all passengers are taken care of and further updates will follow as soon as we have more details.’

Devon and Cornwall Police said its officers were not responding to the incident.