By Katherine Rushton Media And Technology Editor For The Daily Mail 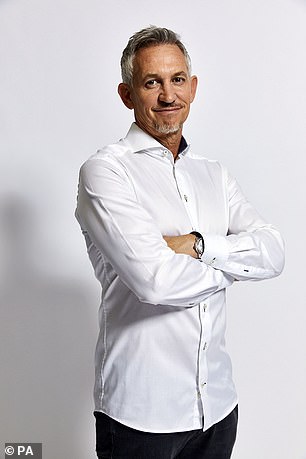 Gary Lineker boasted yesterday that his BBC bosses will do nothing to stop his political web rants.

The Match of the Day host – the broadcaster’s highest-paid star, on £1.75million – directed his 7.3million Twitter followers to the Mail’s revelation that the BBC has rewritten its rules on staff neutrality.

The corporation has always insisted that presenters who do not front current affairs programmes are sometimes allowed to go public with their views on topics such as the arts.

It has now created a loophole for sports pundits, to let them discuss more controversial subjects too.

Sharing the Mail’s article, Mr Lineker glossed over this distinction, tweeting: ‘Bad news, folks!… I think you’ll find the guidelines always allowed for comments/views on social media, apart than [sic] those that work in news…’

The changes follow a series of scandals over Lineker’s political outbursts on social media, where he often rails against Brexit and the ‘damage’ it might cause.

His behaviour got so out of hand that last year, BBC cricket correspondent, Jonathan Agnew told the football pundit: ‘Gary. You are the face of BBC Sport. Please observe BBC editorial guidelines and keep your political views, whatever they are and whatever the subject, to yourself. I’d be sacked if I followed your example. Thanks.’

Check this out  US, Canada set for talks to revise NAFTA

But he has continued to wade into political rows as recently as this week. On Tuesday he retweeted a post branding Tory MP Jacob Rees-Mogg ‘a stupendous dimwit’.

Under the revised BBC editorial guidelines, published last week, the broadcaster still bans news and current affairs presenters from making their political views known on social media, or taking a stance on a ‘controversial subject’.

The rules also state that BBC presenters across the board ‘have the potential to compromise the BBC’s impartiality and to damage its reputation’ by making their personal views public.

But they now stipulate that the ‘risk is lower’ where the presenter is talking about something unrelated to their field, and give as an example ‘a sports or science presenter expressing views on politics or the arts’.

MPs have accused the BBC of sacrificing its principle of impartiality for the football pundit.

Tory Bill Cash said: ‘[This loophole] has been deliberately put into the guidelines for the purposes of trying to justify statements that Gary Lineker makes.

‘His views are so well-known that nobody could possibly imagine that this isn’t especially tailored to deal with his particular problem with Brexit.’

He added that the exemption for sports stars breaks the terms of the BBC’s Royal Charter, which commits the BBC to provide ‘impartial news and information’.

Tory MP Andrew Bridgen said: ‘Is it time to give Gary Lineker the red card?

‘The BBC surrendered any pretence of impartiality – especially regarding Brexit – a long time ago.’