Great British Bake Off star Ruby Tandoh has tied the knot with her long-term girlfriend in a low-key ceremony.

The food writer, 26, married guitarist Leah Pritchard at a ceremony in Sheffield before a reception at Abbeydale Picture House, a former cinema, on Friday.

Leah, who plays in a band called Alimony Hustle and is training to be a counsellor,  wore an electric blue suit over a colourful printed shirt and tan brogues. 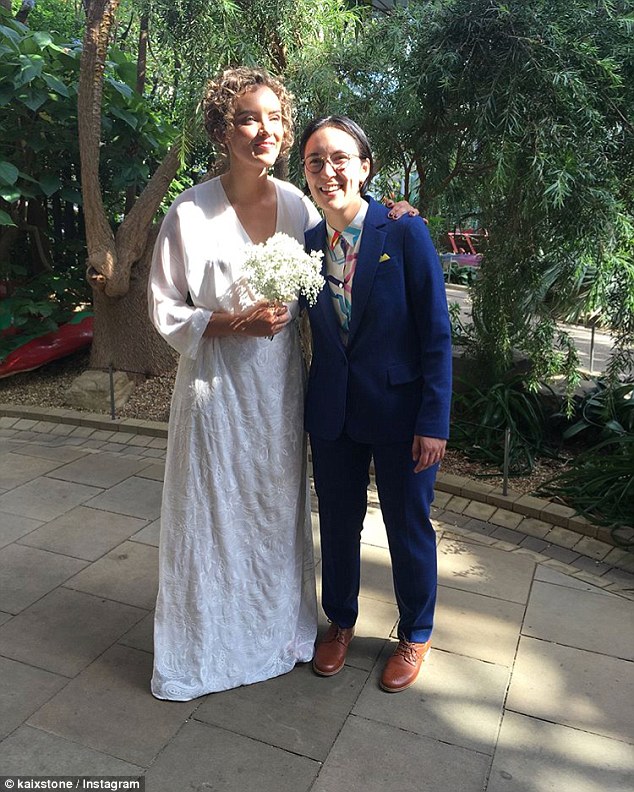 First dance: Ruby and Leah beam at each other as they dance at their reception at Abbeydale Picturehouse cinema. Ruby came out on Twitter in 2015, joking that she was finally able to move on from rumours about her and GBBO host Paul Hollywood 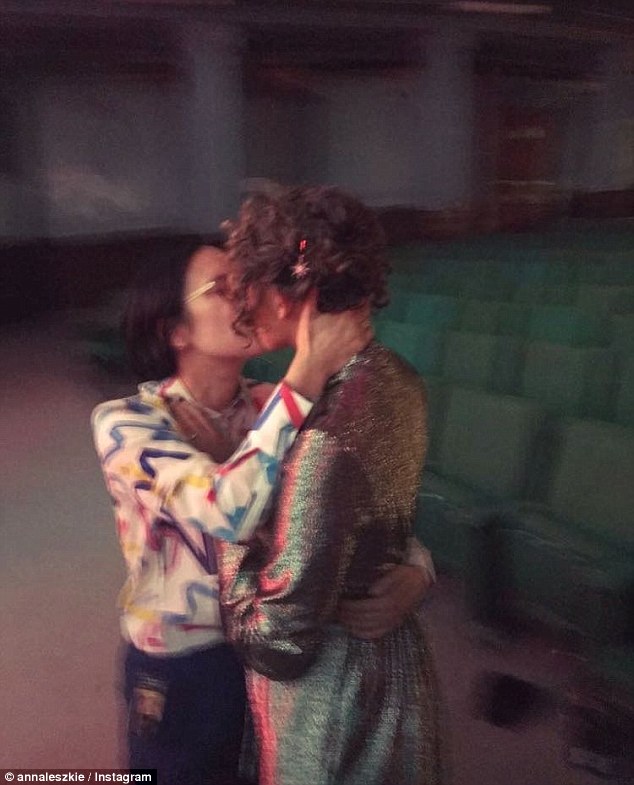 Sealed with a kiss: For her wedding reception, Ruby Tandoh changed into a silver mini dress festooned with sequins and tucked into a ‘naked’ cake covered with multi-coloured icing 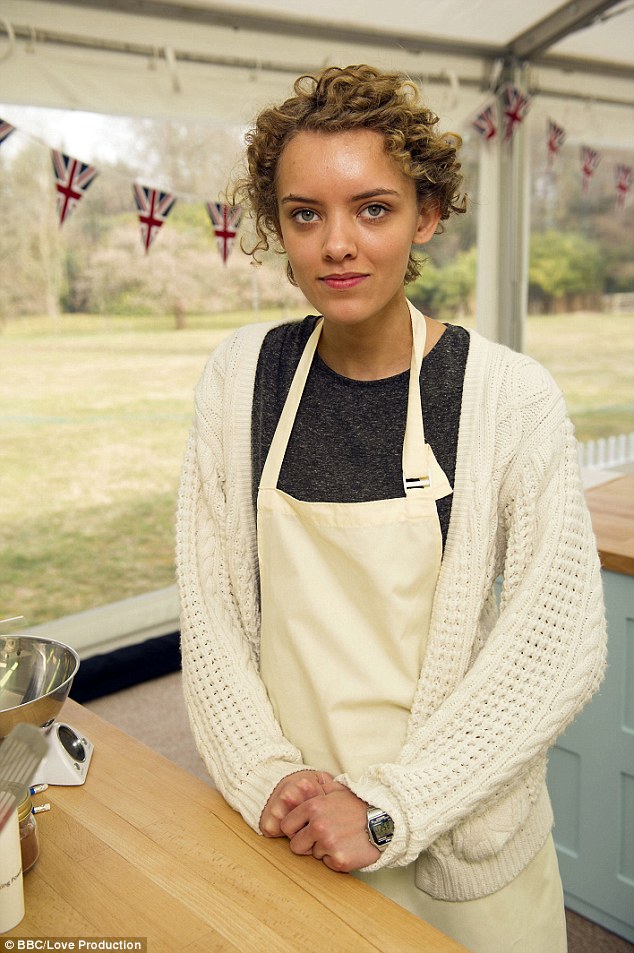 Reality TV star: Ruby on the Great British Bake Off in 2013. She was plagued by rumours about her and host Paul Hollywood and was accused of flirting with him to make it to the finals

For the reception, Ruby changed into a silver mini dress festooned with sequins and tucked into a three-tiered sponge covered with multi-coloured icing – although it is not clear whether the star baker made it herself.

She was derided for her pastel-coloured wedding cake during the series four finale which she lost to Frances Quinn, before dismissing weddings as ‘just an exercise in narcissism’.

The couple are not believed to have invited any of Ruby’s fellow GBBO contestants. 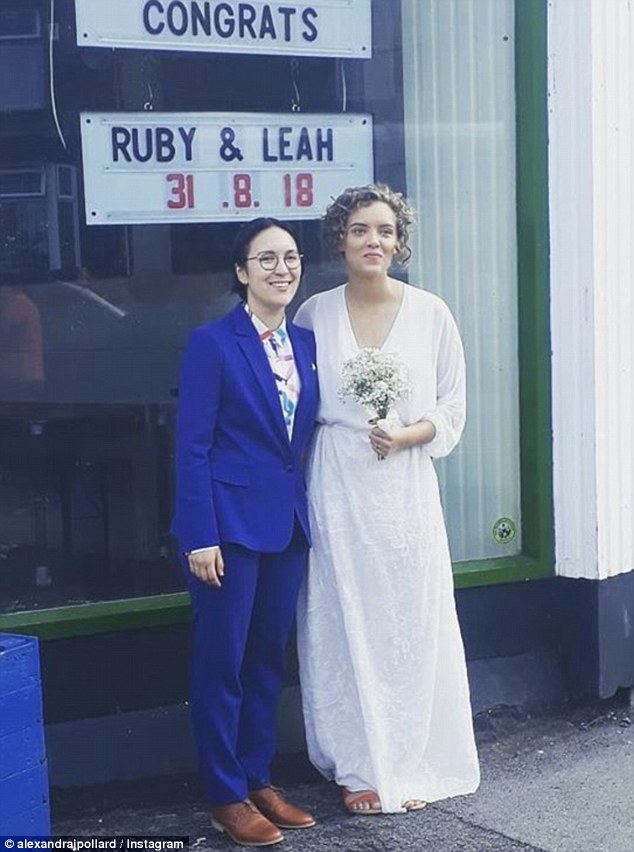 Wedding chic: Ruby and new wife Leah, who plays in a band called Alimony Hustle and is training to be a counsellor. Leah wore an electric blue suit over a colourful printed shirt 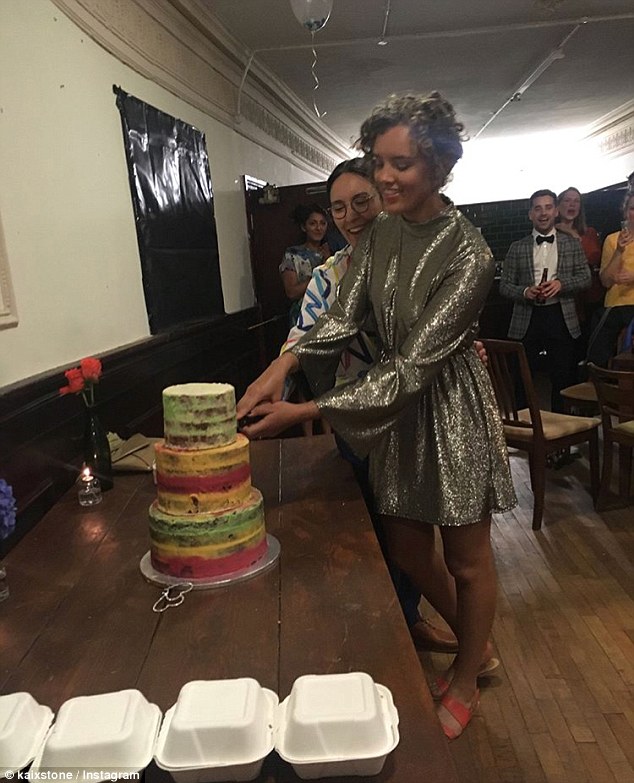 Here’s one she baked earlier! The couple cut into their cake at a reception with friends and family at Abbeydale Picture House. Ruby moved to South Yorkshire two years ago from London 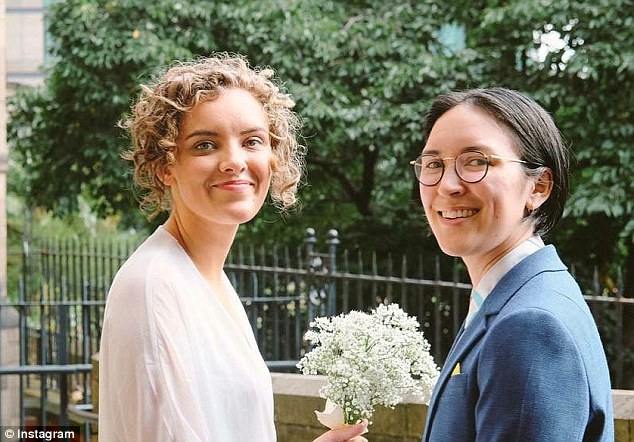 Look of love: Ruby, holding a simple bouquet of white baby’s breath, smiled as she posed for a photo with her new wife. The couple were joined in their happy day by friends and family 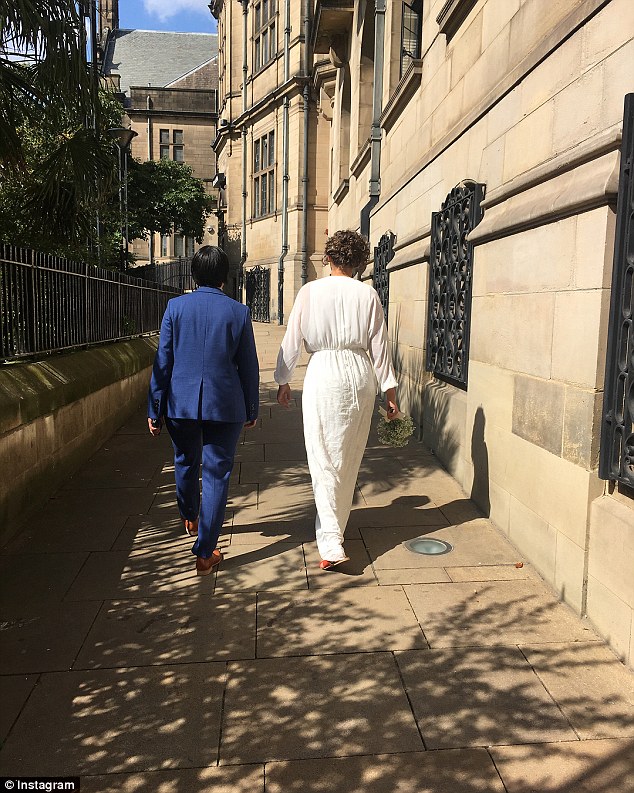 Romantic stroll: The couple were snapped walking side-by-side in the sunshine by one guest

Ruby famously came out on Twitter in 2015, joking that she was finally able to move on from rumours about her and GBBO host Paul Hollywood, after she was accused of flirting with him to make it to the finals.

Her announcement came a few months after she began dating Leah, who met on Tinder and works for a mental health charity.

Speaking on Dolly Alderton’s Love Stories podcast earlier this year, the Southend-on-Sea native said: ‘I’m bisexual, I like men and I like women, and so looking back now I wish I hadn’t said the Paul Hollywood thing […] even though I wouldn’t touch him with a barge pole, it wasn’t because I was queer.’ 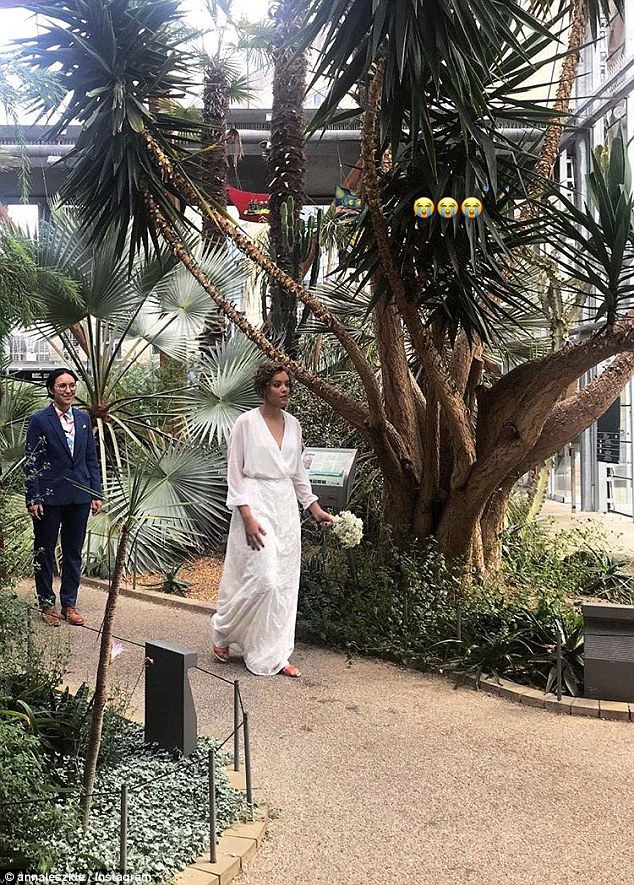 Here come the brides! Ruby, dressed in a draped white lace dress and open-toed sandals, was followed by her wife Leah as they rejoined friends and family

And revealing how she discovered she was attracted to women, she told The Times: ‘I’d had boyfriends and done that and I knew that there was another side to myself that I wanted to understand and explore.

‘So I went on a couple of dates and then I met Leah very quickly and I was lucky.’

Ruby, whose latest book Eat Up! was published earlier this year, has previously revealed that she and Leah have discussed adopting children in the future.

The couple got engaged in January 2017, announcing the news on social media. 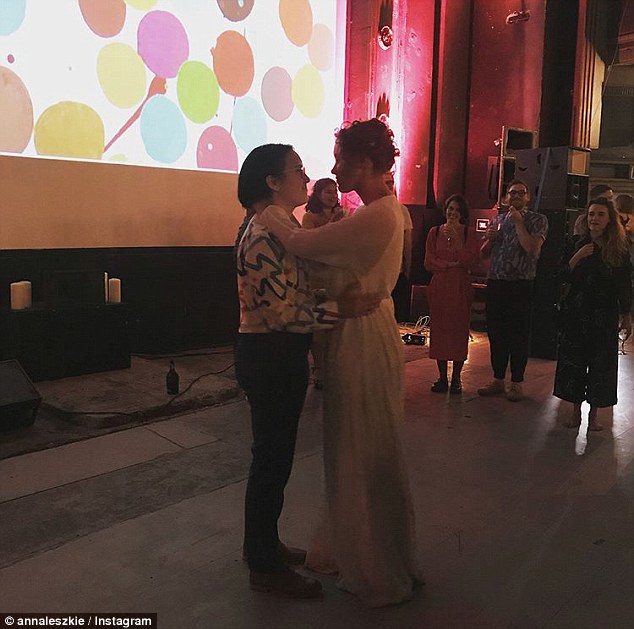 Big day: Ruby and Leah looked utterly in love as they shared a first dance at Abbeydale Picturehouse cinema. They were surrounded by friends and family who took photos 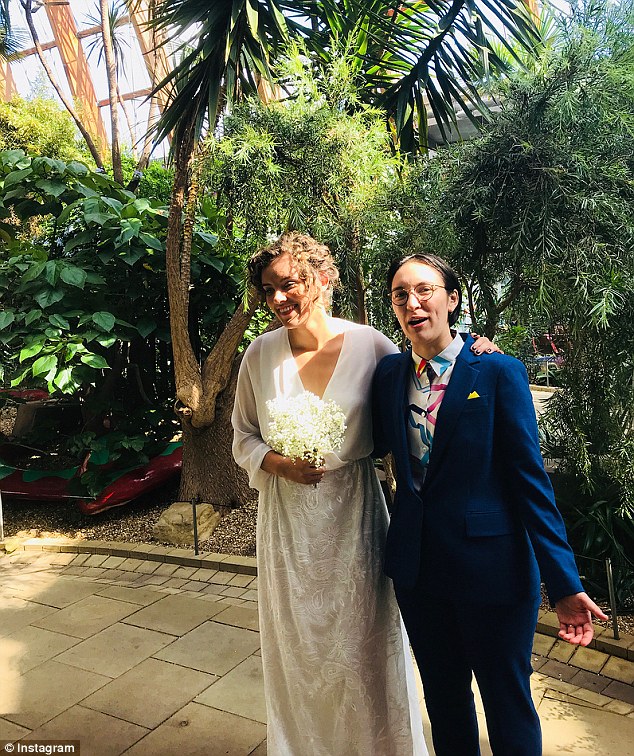 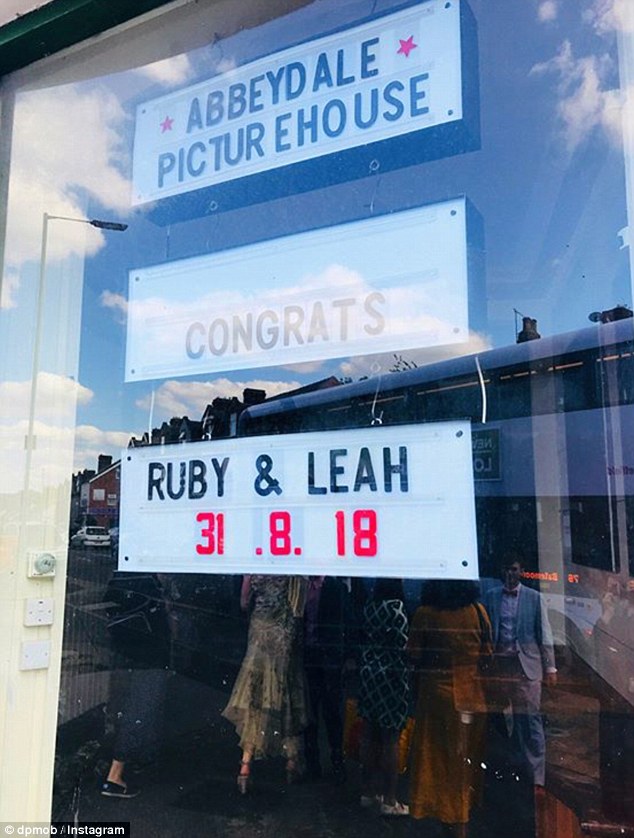 A board outside the wedding venue in Sheffield congratulating food writer Leah and her new wife, Leah. The pair are believed to have met in early 2015, prompting Ruby to come out