By Sophie Tanno For Mailonline and Afp

A lieutenant colonel from Germany’s elite military unit has been suspended from service on suspicion of far-right extremism.

Germany’s defence minister has subsequently vowed to take ‘decisive action’ against any cases of radicalism in the army.

‘We have drawn the first consequences in this case and we will continue to act with the same severity and impose the same consequences in every case,’ Annegret Kramp-Karrenbauer said during a visit to Kosovo on Sunday.

Bild am Sonntag newspaper said the army has been covertly investigating the special forces officer and two other soldiers and was prompted to take action against the man after its probe leaked. 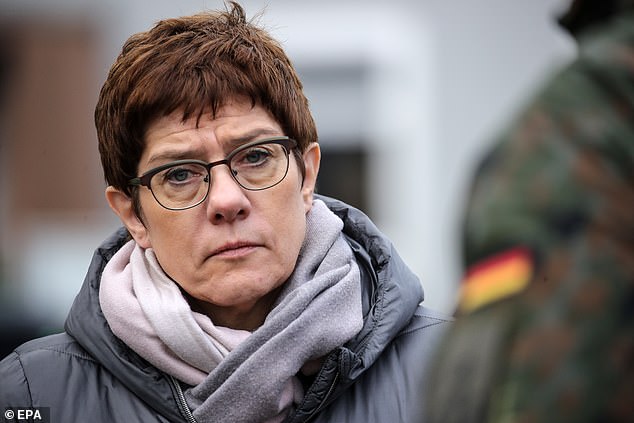 German Minister of Defense Annegret Kramp-Karrenbauer (pictured visiting the 26th Regiment of the Bundeswehr last week) has vowed to take ‘decisive action’ against any cases of radicalism in the army, after it emerged that the Bundeswehr is to suspend a member of its elite KSK force on suspicion of far-right extremism

The lieutenant colonel, known as Daniel K., is accused of making right-wing extremist posts on social media and has received a service and uniform ban. He is reportedly being investigated by the military’s counterintelligence service MAD.

Of the other two suspects, one has been stripped of the right to wear a German army uniform while the other has been classed as a suspicious case.

Check this out  Actor John Kapelos: I was paid just £16,000 to be in the Breakfast Club but it launched my career

Both had allegedly made the banned Hitler salute during a private party hosted by the suspect who is to be suspended next week, according to the newspaper.

The elite KSK is charged with sensitive and risky missions including hostage rescue operations or anti-terror action abroad.

But suspicions that some members are far-right leaning have always plagued the force.

KSK soldiers carry out anti-terror operations, particularly in the Middle East and the Balkans.

The head of the military’s counter-intelligence service Christof Gramm had said that there are around 20 suspicious cases at the KSK.

Across the army, however, the number of such cases is as high as 500. 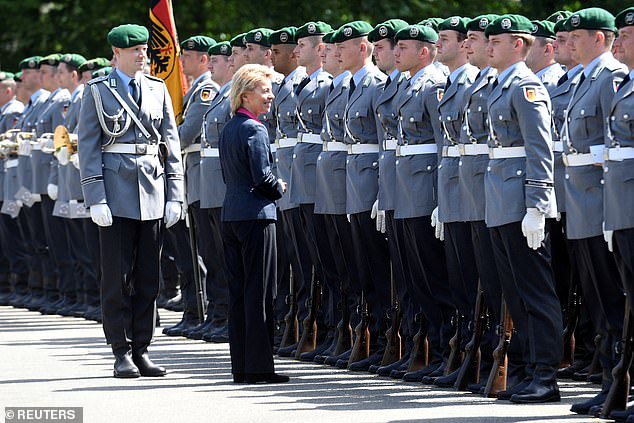 Last year, then defence minister Ursula von der Leyen ordered the military to cleanse itself of all links to the Wehrmacht, after learning that steel helmets and memorabilia of the Nazi-era army were openly displayed at one of its barracks (Pictured: Von der Leyen with the Bundeswehr tank battalion 414 in Lohheide on May 17, 2018)

Check this out  'There's no way that guy took his life': Epstein accusers don't believe billionaire hanged himself

The armed forces has over the years repeatedly come under fire over embarrassing associations with Germany’s militaristic past.

Last year, then defence minister Ursula von der Leyen ordered the military to cleanse itself of all links to the Wehrmacht, after learning that steel helmets and memorabilia of the Nazi-era army were openly displayed at one of its barracks.

She also ordered barracks still named after World War II figures, like field marshal Erwin Rommel, to be stripped of their names.