While popular premier Bodo Ramelow’s far-left Die Linke party easily retained the top spot with about 30 per cent, the Alternative for Germany scored at least 23 percent – more than doubling its result in the previous election in 2014.

This put the anti-immigration party in second spot, narrowly ahead of Merkel’s party, who won about 22 percent, and far ahead of her coalition partners, the once powerful Social Democrats (SPD), who scored only eight percent. 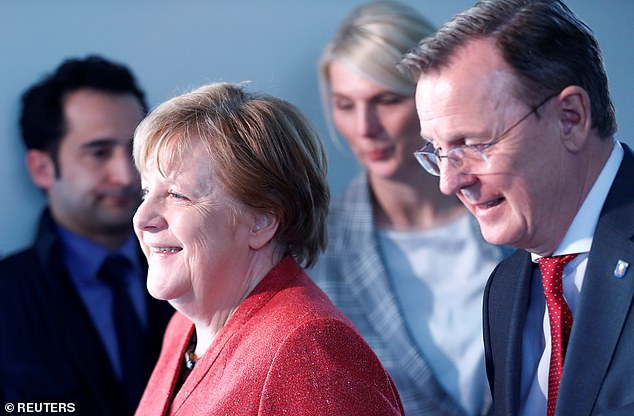 The AfD’s strong result came despite widespread criticism after an October 9 attack in the eastern city of Halle, where a suspected neo-Nazi gunman tried and failed to storm a synagogue then shot dead two people outside.

After the bloody attack, the commissioner for combating anti-Semitism, Felix Klein, like many other critics, argued that the AfD had trafficked in incendiary anti-Jewish sentiment.

The Thuringia campaign has been marked by anger, threats and recriminations, with CDU candidate Mike Mohring labelling the AfD’s local leader, the nationalist hardliner Bjoern Hoecke, a ‘Nazi’.

A triumphant Hoecke told supporters on Sunday that the state – 30 years after the fall of the Berlin Wall – had voted for a second revolution, a ‘Transition 2.0’, and delivered ‘a clear ‘no’ to the ossified party landscape’. 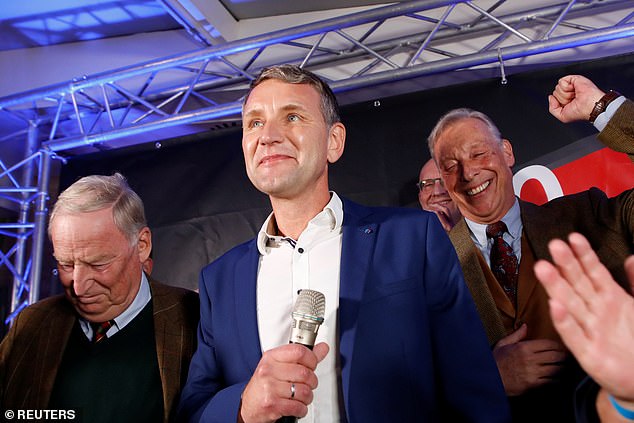 Bjoern Hoecke, Alternative for Germany (AfD) party leader and top candidate for the Thuringia delivers a speech after announcement of first exit polls in Erfurt, Germany

The rise of the AfD has made it harder for the other parties to form a governing coalition, boosting the likely role of smaller players with single-digit results such as the much reduced SPD and the Greens.

In Thuringia, the only state ruled by Die Linke, the post-election situation is complicated further by the CDU’s refusal to cooperate with the hard-left party, despite the relatively moderate stance of Ramelow, a folksy former trade union official.

In the eastern states of Saxony and Brandenburg last month, the AfD also scored above 20 percent to become the second-largest force.

However, in both cases the mainstream parties kept a pact not to enter into government with the far-right party, a pledge they have also made in Thuringia.

The election in the state of just over two million people was closely watched as another snapshot of the mood in the AfD heartland, especially given the role of Hoecke, a former history teacher considered extreme even within his party. 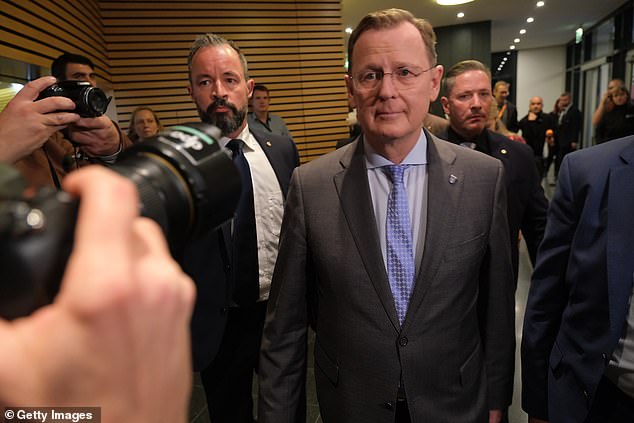 While popular premier Bodo Ramelow’s far-left Die Linke party easily retained the top spot with about 30 per cent, the Alternative for Germany scored at least 23 percent

Hoecke, 47, has labelled Berlin’s Holocaust memorial a ‘monument of shame’ and called for a ‘180-degree shift’ in Germany’s culture of remembrance of the crimes against humanity committed by the Nazi regime.

Signalling political ambitions at the national level, Hoecke has openly challenged the AfD’s senior leadership and was accused of a ‘personality cult’ after marching into a hall escorted by flag-waving supporters.

The CDU’s Mohring recently declared that ‘to me, Hoecke is a Nazi’.

With tensions running high on the campaign trail, police have been investigating death threats against Mohring and Greens co-leader Robert Habeck, and an arson attack on an AfD campaign truck.

The AfD started out as a eurosceptic fringe party before reinventing itself as an anti-Islam, anti-refugee movement to capitalise on anger over a massive influx of asylum seekers in 2015.

Its populist message has resonated most strongly with voters in Germany’s former communist east where resentment lingers over lower wages and fewer job opportunities.

Ramelow on the eve of the vote said that ‘the AfD claims to be the party that cares. But in reality, it is a party that knows nothing but outrage’.