A baby boy who was born prematurely on Boxing Day with heart problems has died – days after his parents launched an urgent appeal for an organ donation.

His parents Sarah and Chris Cookson, from South Shields, South Tyneside, launched an appeal to find a new heart for him after being told a transplant was his only hope. 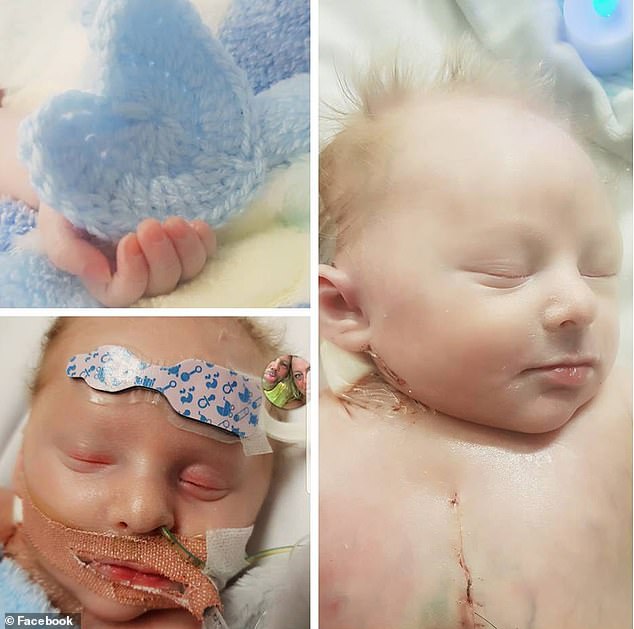 Sarah Cookson posted on Facebook this evening: ‘RIP Carter John Cookson. Today he could not fight anymore.’ She included this collage of her baby son 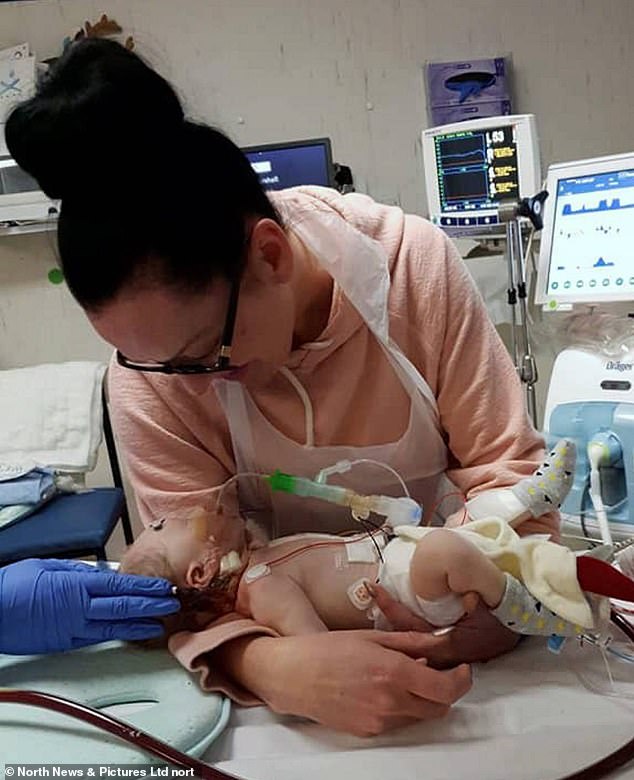 In a Facebook post on Wednesday, Mrs Cookson urged people to help find a suitable organ donor for her child (pictured with Carter in hospital)

But on Saturday night, Sarah Cookson posted on Facebook: ‘RIP Carter John Cookson. Today he could not fight anymore.

‘At 5.44pm our brave baby boy John Cookson gained his angel wings and flew into his big brother’s arms.

‘We are heart broken….our two boys are in heaven without their Mammy and Daddy we feel so empty and our hearts will never recover.

‘No more pain baby boy, No more tubes..be free with your big brother and Granda…until we can all be together again. You have taken our hearts with you….. we will never recover.’

On Friday night, the couple had said they were trying to focus on spending time with Carter, who they feared only had days to live, at the Freeman Hospital, Newcastle.

Their Facebook post read: ‘Our hearts are breaking… as once again no phone call… and another day closer to losing our baby.’ 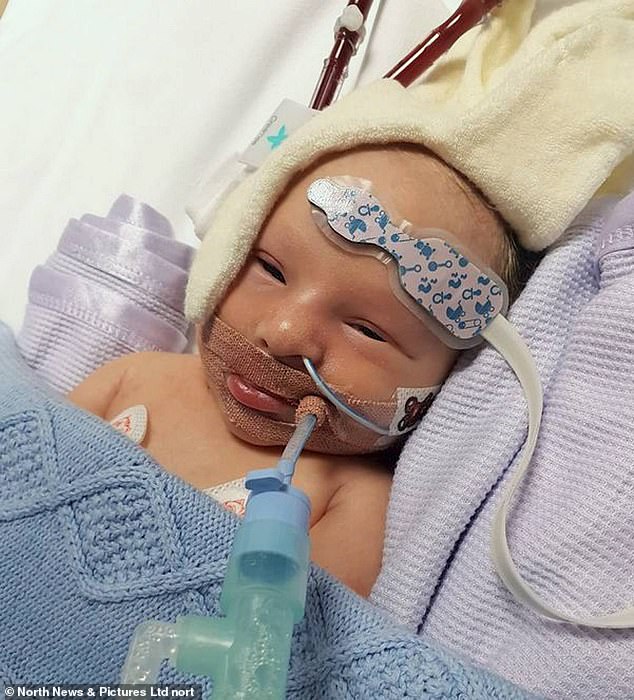 Doctors at Newcastle’s Freeman Hospital broke the news to Sarah, 44, and Chris Cookson, 40, that their son Carter had just days to live 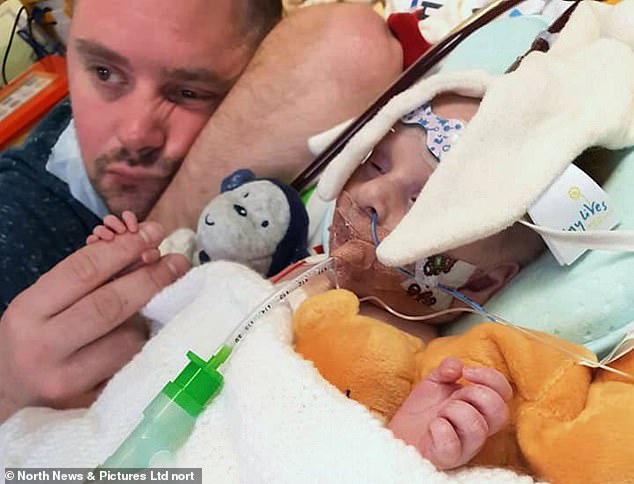 His mother wrote on Facebook: ‘Carter’s Mammy and Daddy have met with doctors today, they have been advised that due to issues with the Ecmo machine they now predict that they only have 3 days to find a heart’ (Carter pictured with his father in hospital)

Thousands of people posted their condolences on the social media site beneath a final photograph of Carter.

Carter underwent surgery a week after his birth, but the operation to drain one side of his heart and install a pacemaker was unsuccessful.

The couple have already been through the heartbreak of losing their first son Charlie, who died aged two in 2013, which led them to set up a charity.

Their plea for an organ donor for Carter was shared widely on social media.

He underwent major heart surgery due to severe heart problems days after his birth.

But then his family was told his only chance for survival was for him to undergo a heart transplant, leaving them in a race against time. 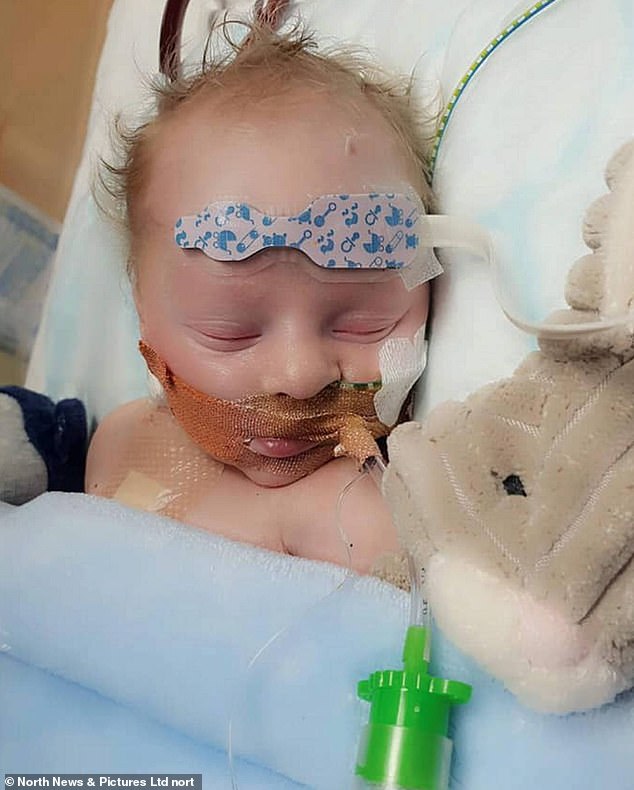 He was put on an Ecmo machine, which replaced the function of his heart and lungs, but there have now been complications with it 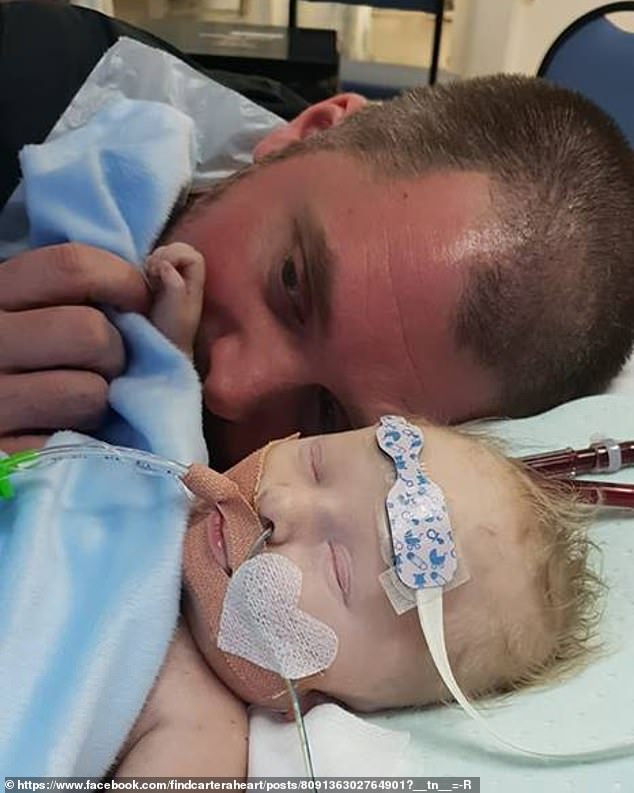 Just 24 hours ago Carter’s father, Chris, was pictured next to his son in hospital. The baby sadly died this evening after doctors were unable to find a transplant in time

Carter’s parents, of South Shields, launched the campaign #findaheartforCarter in an urgent plea to help their baby boy.

Posting on the Find a Heart for Carter Facebook Page earlier this week, the family said: ‘We really do need your love, support and prayers more than anything now!’

Ms Cookson, who runs the Sarah Howe Cookson School of Dance, previously said on Facebook: ‘It has taken us a few days to get our head round the news from the consultants, we still can’t.

‘Our boy has not responded to the surgery and the only way he will survive is if he gets a new heart or by some miracle his heart begins to pump blood around his body.

‘He is on the transplant list but we need as much awareness out there as possible.’

Doctors operated on Carter before attaching him to an ‘Ecmo’ machine to pump the blood around his body.

But the Ecmo machine, which replaced the function of his heart and lungs, has had complications.

The Ecmo machine ‘only lasts a maximum of six to eight weeks that’s if there are no complications,’ according to Ms Cookson. 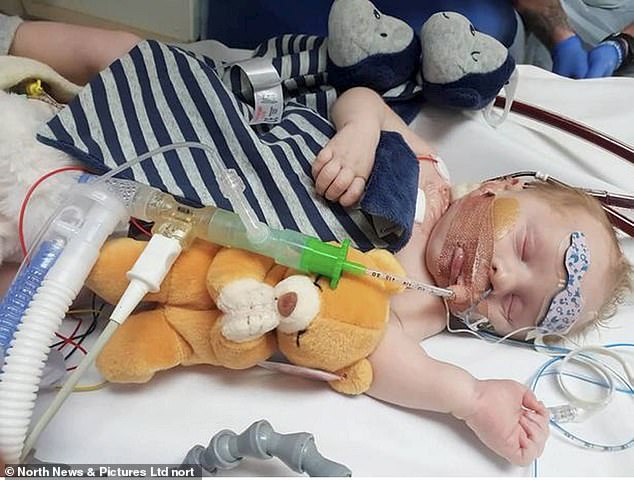 Carter was born on Boxing Day, 2018 with severe heart problems and at just a few days old he underwent major heart surgery (pictured in hospital) 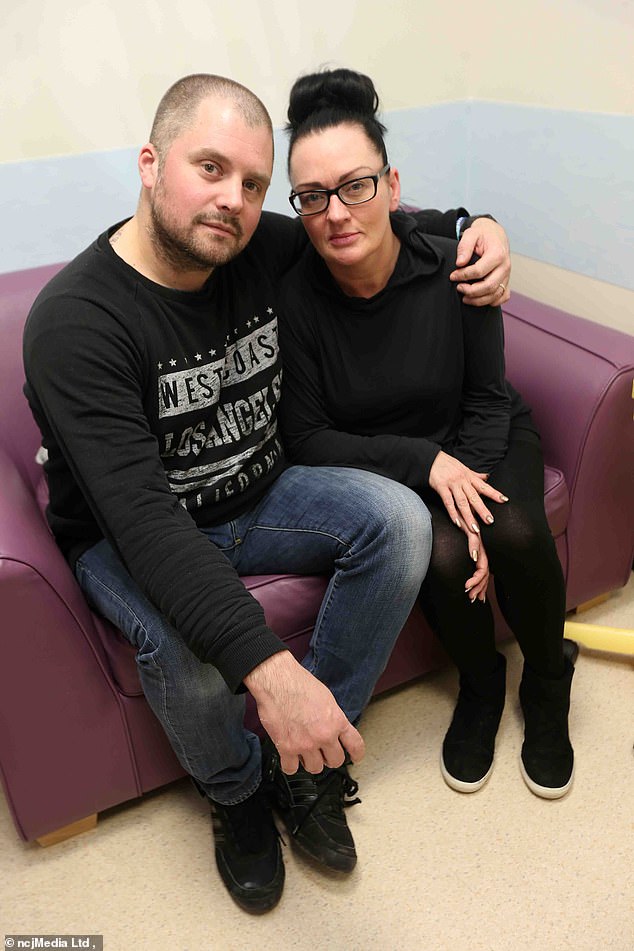 Carter’s parents (pictured together), of South Shields, then launched the campaign £findaheartforCarter in an urgent plea to help their baby boy

Every time the wires are changed on the machine Carter is left at risk of infection and clotting.

Doctors took the difficult decision of deciding that they have until Saturday before they take Carter off the machine.

The appeal said: ‘Carter’s Mammy and Daddy have met with doctors today, they have been advised that due to issues with the Ecmo machine they now predict that they only have 3 days to find a heart.

Mrs Cookson wrote on Facebook on Wednesday: ‘We desperately hope that out baby’s courage and strength leads to our prayers being answered.

HOW COMMON ARE HEART TRANSPLANTS?

As many as 200 heart transplants are carried out on adults in the UK each year, according to official statistics.

But an estimated 1,300 men, women and children die every year waiting for a new organ, according to the British Heart Foundation.

Patients are added onto a waiting list if they are deemed for suitable for such an operation to replace their faulty heart.

Once placed in such a queue, it could take days, months or even years before a healthy donor organ is found.

One fifth of such patients never get the organ they so desperately need, while half manage to get one within three years.

‘Everyday is getting harder and harder… we feel sick when we walk into the hospital..it’s the fear..of what will be, is the machine still working?.. is his breathing ok?… are his organs surviving? then…..IS TODAY THE DAY?

‘But we take a deep breath and get through it for Carter. If he is fighting we are fighting.’

The couple lost their first son, Charlie, in October 2013, when he was just two-years-old.

In his memory, they set up the Charlie Cookson Foundation, which provides financial support to parents of seriously ill children.

Mrs Cookson added: ‘Our local MP Emma Lewell-Buck advised us that the following has been passed in Parliament.

‘NHS Blood and Transplant will support specialist nurses in the difficult conversations they have with bereaved families whose deceased child is eligible for organ donation, by informing them that there are eight children on the waiting list for a heart, and at least one of those families has already lost a child.

‘After reading this… it filled me with warmth..as hearing this at such a devastating time turns my heart from despair to love..and to what a son and daughter can give…a gift of life. If we do not get our miracle we will take comfort knowing our brave boy lives on in others.

‘We need this story to get to the right people… please please share as much as you can on all social media we are all heart broken at this latest news but won’t give up hope.’ 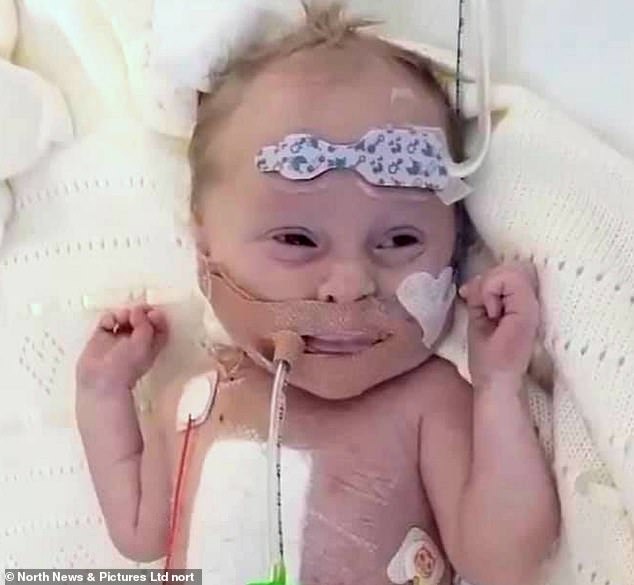 Days after he was born, Carter’s family was told his only chance for survival was for him to undergo a heart transplant