PHILADELPHIA (AP) – H.F. “Gerry” Lenfest, who made a $1 billion fortune in the cable industry and gave almost all of it away, supporting schools, museums, journalism and the arts in Philadelphia and beyond, died Sunday, a family spokesman said.

Gerry Lenfest was 88. He was taken Sunday from his Rittenhouse Square home to Penn Presbyterian Medical Center, where he was pronounced dead of complications from chronic illness, said Fred Stein. Stein will handle a memorial service planned in Philadelphia in September.

“There is likely not an organization or charity in Philadelphia that didn’t benefit from the Lenfest family’s generosity in some way,” said Pennsylvania Gov. Tom Wolf. “Gerry was a great human being and an even better citizen.” 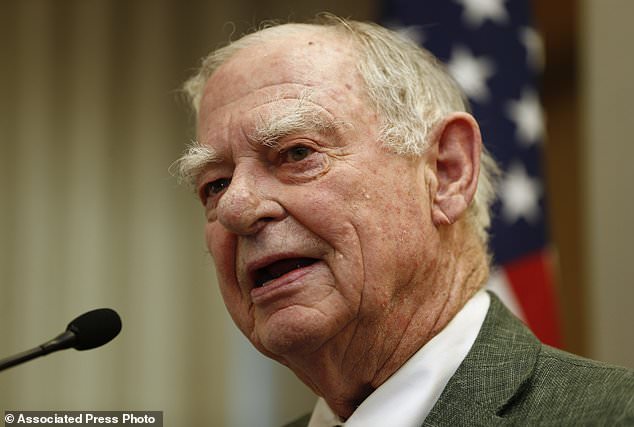 FILE – In this Jan. 12, 2016, file photo, H.F. “Gerry” Lenfest, owner and Chairman of Philadelphia Media Network (PMN), makes an announcement during a news conference at the National Constitution Center in Philadelphia, Pa. Lenfest, a former cable TV mogul and Philadelphia newspaper owner who gave away most of his $1.2 billion fortune to charity has died. Lenfest was 88. Family friend Fred Stein said he died Sunday, Aug. 5 2018, of complications from chronic illness. (AP Photo/Rich Schultz, File)

Lenfest and his wife, Marguerite, made about $1.2 billion when they sold Suburban Cable to Comcast Corp. in 2000. The Lenfests immediately set out to give away the fortune. By 2014, as he stepped in to help Philadelphia’s ailing newspapers, Gerry Lenfest estimated he had given away $1.1 billion.

“Money is a responsibility when you have that kind of wealth. I’ve tried to do right by it. Perhaps the greatest opportunity came with the ownership of these newspapers,” Lenfest said in 2016 when he donated the newspapers to a newly created nonprofit. “What would this city be without the Inquirer and Daily News?”

The Lenfests also gave to the Philadelphia Museum of Art, Barnes Foundation, Kimmel Center for the Performing Arts and Lenfest’s alma maters: Mercersburg Academy, Washington and Lee University and Columbia University. Wilson College, Marguerite’s alma mater, also received funds. Lenfest also gave $50 million to champion the new Museum of the American Revolution, which opened in April 2017 and, he felt, provided the “missing link” to tie together the city’s historic sites.

Their three children didn’t need the money – they were given stakes in Lenfest’s cable company when it wasn’t worth much – and Gerry Lenfest said he feared a permanent foundation would do more to perpetuate itself than help others.

“During your lifetime, you can direct how your wealth is spent for the most good. But after your death, it is problematic. You don’t have the control,” Lenfest told The Philadelphia Inquirer in 2004.

Within four years, the Lenfests had given away $325 million and dropped off Forbes magazine’s list of the 400 richest Americans. Nearly half that money – $150 million – went to a foundation named for them that must spend its last penny within 20 years of the last spouse’s death.

At age 84, Lenfest unexpectedly became the sole owner of The Philadelphia Inquirer, Philadelphia Daily News and the website Philly.com. His business partner, Lewis Katz, had died in a plane crash in June 2014 just days after they paid $88 million to buy the company from rival co-owner George Norcross.

Though the Lenfests lived a luxurious life with yachts, expensive cars and multiple homes, friends described them as down-to-earth. They spent much of their time at their house in Huntingdon Valley, which they bought for $35,000 in 1966. With no help, the Lenfests cooked for guests.

Harold FitzGerald “Gerry” Lenfest and his twin sister, Marie, were born in 1930 in Jacksonville, Florida, but soon moved to Scarsdale, New York, where their father worked in the shipping industry.

When Lenfest was 13, the family moved to a farm near Lambertville, New Jersey, where Lenfest had no shortage of chores. He went to Flemington High School and graduated from Mercersburg Academy in south-central Pennsylvania.

He graduated from Washington and Lee with a degree in economics in 1953, served with the Navy in Norfolk, Virginia, and got his law degree from Columbia.

He worked for a New York law firm before landing a job in 1965 with Walter Annenberg’s Triangle Publications, which owned TV Guide, Seventeen magazine, several TV and radio stations, and cable franchises.

In 1973, Annenberg decided to sell the cable assets. Lenfest, with the help of two investors, ended up buying the system in Lebanon, Pennsylvania.

“I was editorial director and publisher of Seventeen magazine and I had an office on Park Avenue. I had a good salary,” Lenfest recalled in 2000. “I left all that to work out of my basement for 12 years, not nationally known, not a good salary. I used to sleep on the sofa in Lebanon, because I couldn’t afford a hotel room.”

That one system in Lebanon eventually became Suburban Cable, the 11th-largest cable company in the country.

Lenfest expanded slowly at first. He grew the system in Lebanon, set up cable franchises in towns around Philadelphia and by 1981 the company had about 40,000 subscribers. The company acquired systems in and around San Francisco and pushed hard to expand in the Philadelphia area.

By the time Lenfest sold Suburban to Comcast in 2000, it had 1.2 million subscribers.

After his Navy service, Lenfest spent 24 years in the Reserves. He was honorably discharged with the rank of captain.