The Transylvanian suspect accused of the frenzied ‘Midsomer murder’ of a grandmother in the bed of a luxury waterside house in Britain at Christmas will be extradited to the UK.

Artist Valerie Graves, 55, was house-sitting a £1.6million property in the idyllic Sussex village of Bosham when she was bludgeoned to death with a claw hammer in a ground-floor bedroom.

Cristian Sabou, 28, was arrested on a European arrest warrant on Wednesday morning at his home in the Transylvanian town of Dej, in the north-western part of Romania.

A Sussex Police statement said this afternoon: ‘He did not contest the application to extradite him and arrangements will now be made to bring him to the UK. He will then appear before a magistrates court before being sent for crown court trial’.

Earlier today Sabou was dragged into court for legal talks about his extradition to the UK with four officers from the Surrey and Sussex major crime team in Romania to assist with the arrest and legal operation.

The killing, over the Christmas holidays in 2013, was nicknamed a ‘Midsomer murder’ after the television show of the same name, which has been filmed nearby. 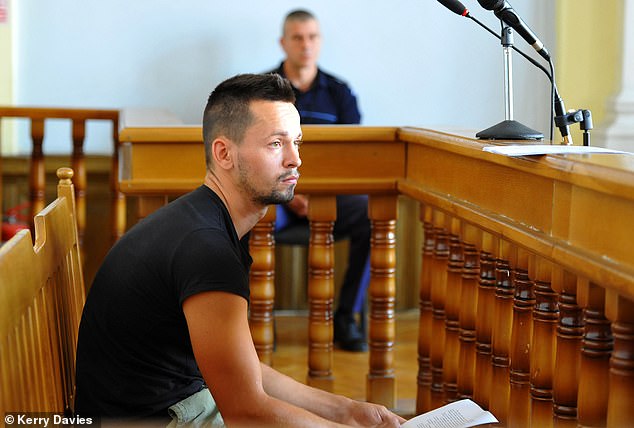 Cristian Sabou, 28, was arrested on a European arrest warrant on Wednesday morning at his home in Dej, in the north-western part of Romania and is in court today over a British murder 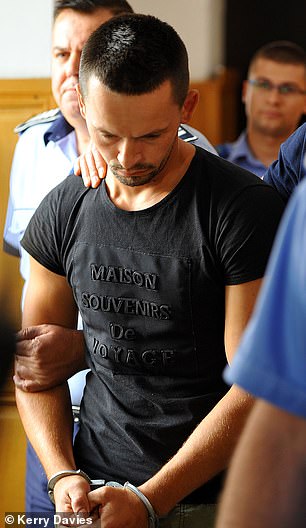 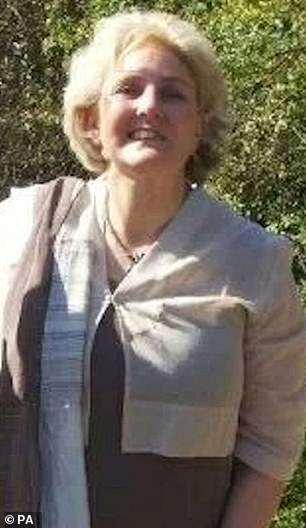 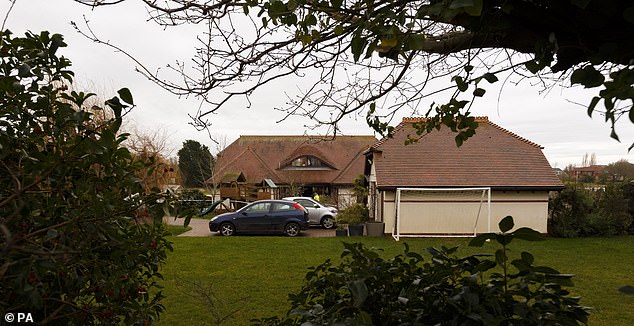 Valerie Graves was found dead while house-sitting in this luxury property in Bosham, West Sussex in 2013 (pictured)

The murder has long remained a mystery, despite Sussex Police launching its biggest manhunt to find the killer, knocking on more than 700 doors and DNA testing 2,750 locals. With nothing stolen, and the attack taking place in a bedroom while relatives slept upstairs, police suspected a sexual motive.

Intelligence suggested a prowling stranger had been secretly watching her, and may have struck after she undressed for bed. A 22-year-old man arrested at the time was soon freed. Neighbours feared the killer was living among them.

The murder weapon had been found near the scene, a £20,000 reward was offered, and 5,000 people were interviewed, yet the hunt seemed fruitless.

But yesterday Sabou was detained on suspicion of murder.

The 55-year-old artist was murdered with a claw hammer in a ground floor bedroom at a £1.6million house in Bosham, West Sussex – a village featured in ITV drama Midsomer Murders.

She had been house-sitting with her sister Janet, 60, Janet’s architect boyfriend Nigel Acres, 59, and their elderly mother Eileen, 87, while the property’s owners holidayed abroad over Christmas.

Grandmother Ms Graves had gone to bed at around 10pm on December 30, and 12 hours later her sister Janet found her dead in her room, at the rear of the house.

Sussex Police Detective Chief Inspector Jon Fanner said: ‘This is a major development in the case. It follows detailed inquiries in Romania by officers from the Surrey and Sussex Major Crime Team, in which we were assisted by valuable liaison with local law enforcement officers of the General Police Inspectorate, Criminal Investigations Directorate, Bucharest, the Criminal Investigation Service in Cluj, and the Special Operations Brigade in Cluj, also the local prosecutor. 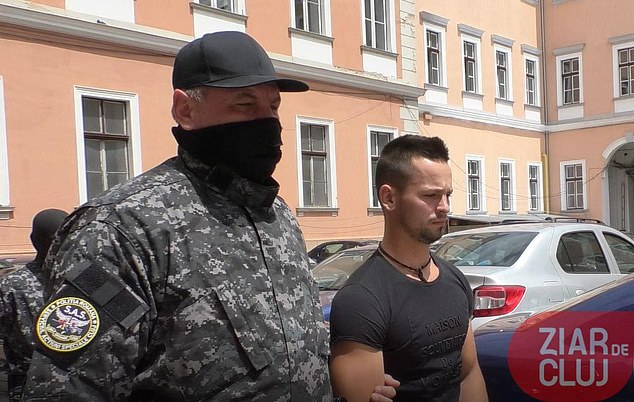 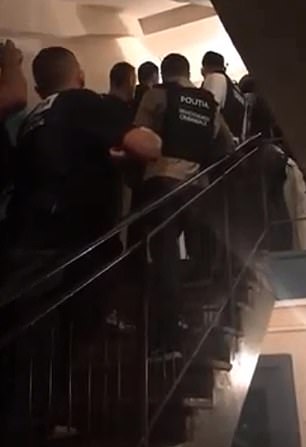 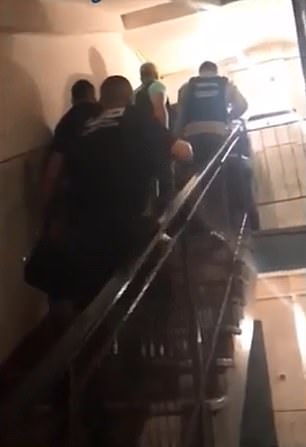 Sabou will now appear in court in Romania at a date to be fixed to face an extradition hearing. Pictured left and right are police storming a building in Dej, Romania 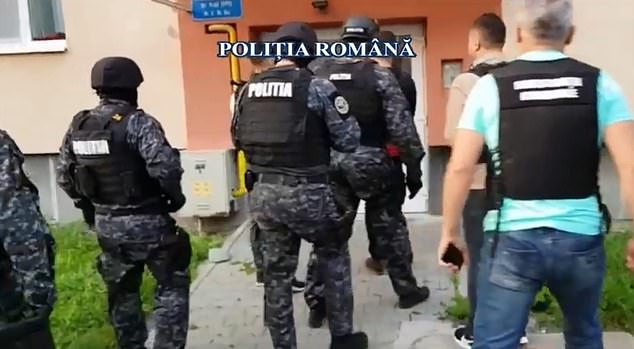 Romanian police arrested Cristian Sabou on a European Arrest Warrant this morning at his address in the northern town of Dej, pictured 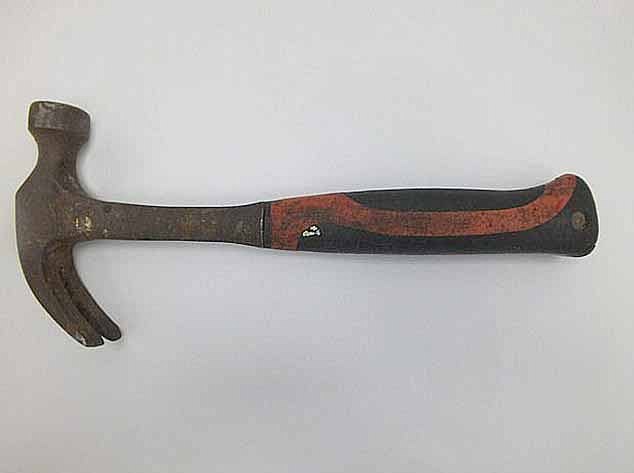 This is the claw hammer police believe was used to bludgeon the 55-year-old artist to death on December 30, 2013

‘We have worked closely with the Crown Prosecution Service throughout and they have authorised the prosecution. We have also had valuable support from the National Crime Agency’s overseas network. 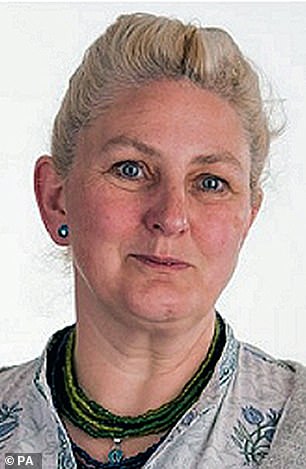 Valerie Graves, pictured, who was bludgeoned to death in Sussex in 2013

‘Valerie’s family have been kept informed of developments but they are not making any public statement at this time.

‘We now hope to ensure, subject to the decision of the Romanian courts and judicial authorities, Sabou’s return to this country for an appearance before magistrates with a view to his being sent for Crown Court trial.

‘This is a major development in our task of achieving justice for Valerie and her family, but now the case is before the courts, proceedings are active, and we are not in a position to disclose any further information at this time.’

Check this out  King's absolute rule towers over eSwatini election

Ms Graves’ family described her as an ‘excellent mother’ and ‘great grandmother’ while her daughter Jemima Harrison, 41, said she was ‘very nice, kind and loving’.

A family statement released after her death added: ‘Val was a much loved daughter, sister, mum and nan, who will be sorely missed by the whole family.

‘Val was a free spirit who enjoyed her life and was a talented artist, about to embark on a new path involving ceramics.

‘She was an eternal student who was always hungry for a new challenge. She had recently moved back to Sussex from Scotland to be closer to her family and we were lucky enough to spend a family Christmas together.

‘This has been a complete shock to the family and we appeal to anyone who has any information, no matter how trivial, to contact Sussex Police.’

The family have also spoken about how difficult they find the Christmas period ever since her death.

At the time of her death she had recently moved back to Sussex from Scotland to help care for her elderly mother in Bracklesham Bay. 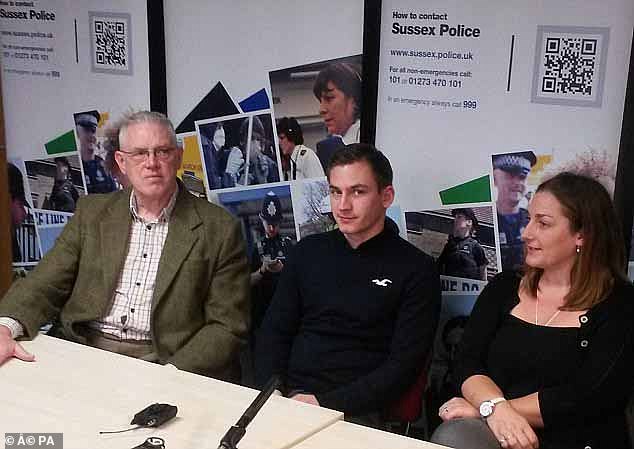 Nigel Acres, left, partner of Valerie Graves’ sister Jan, Ms Graves’ son Tim Wood, centre, and her daughter Jemima Harrison, right, all appeared at a public appeal in 2014 to ask for information on her killer 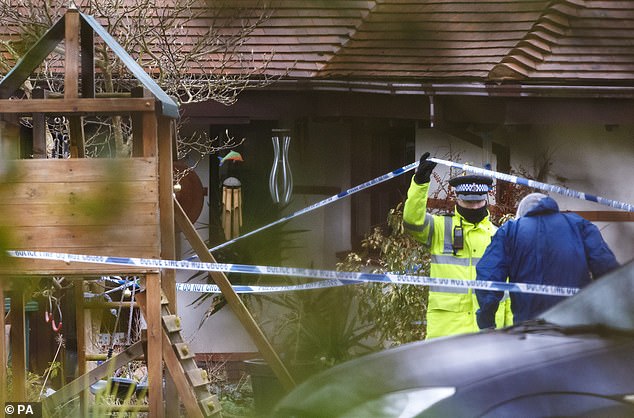 Ms Graves was house-sitting at a property in Bosham, West Sussex, with her sister when she was brutally attacked with a claw hammer. Pictured is police at the scene in 2013 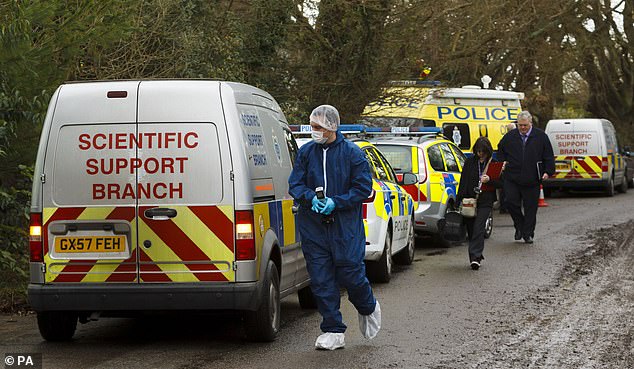 The death prompted a huge investigation but no killer was identified in the aftermath, with a £20,000 reward offered and a Crimewatch appeal put out 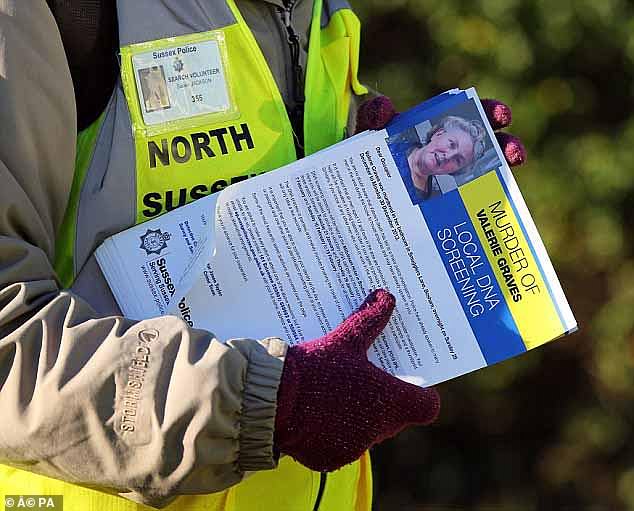 A post-mortem examination revealed Ms Graves had suffered significant head and facial injuries at the house in Smugglers Lane.

Despite extensive investigations, including interviews with more than 9,500 people by police, her killer could not be found.

A 22-year-old man was arrested on suspicion of her murder at the time but was later released without charge.

Mr Wood, 71, had a successful career as a sound engineer, touring Europe with artists including Donovan, and Steve Harley and Cockney Rebel.

A £20,000 reward for information was then offered, BBC Crimewatch also put out an appeal and one of the largest DNA screenings in British history was launched.

Officers handed out leaflets and put up posters asking ‘all men aged over 17 who live, work or visit Bosham to help police find Valerie’s killer by providing a simple DNA mouth swab and thumbprint’ to ‘enable police to eliminate as many men as possible from the inquiry’.

Speaking at the time, her son Tim Wood, 39, said: ‘It’s hard to carry on knowing that someone is out there able to do it to someone else and knowing that they haven’t been caught for what they have done.’

Describing the night of Ms Graves’ death previously, her sister’s partner Nigel Acres said: ‘I had been out to London that day and I got back in the evening.

‘Jan had spent the day with her mother and her sister. It was another holiday so it was very calm. It was just a very pleasant evening.

‘They had been watching television and then everyone drifted off to bed in the usual way. Nothing out of the ordinary, absolutely nothing.

‘I came down in the morning for breakfast. Jan had already been down there in the kitchen and we noticed the bedroom door where Valerie had been sleeping was open.

‘We didn’t raise any alarm at that stage because Jan’s mother had been ill prior to Christmas and we thought she may have spent the night in her mother’s bedroom, just to look after her.

‘I went off to the farm shop to get some provisions for breakfast. It wasn’t until I came back and there was a paramedic that I personally was alerted to (Ms Graves’ death).’

It was revealed after her death that the £1.6million property may have previously been a venue for swingers’ parties.

Police investigated an online advert on a sex-themed website that said the venue could be used for a ‘discreet relationship’ or ‘casual sex’.

There is no suggestion that any of the occupants of the house at the time of the murder were aware of its past.