Hong Kong protesters have fired flaming arrows in clashes with police and occupied the city centre for a third day running today in the latest escalation after months of violence.

Protesters armed with bows and arrows launched their fiery projectiles on the Chinese University of Hong Kong campus this morning and set fire to a metro train nearby.

Police fired tear gas and rubber bullets in clashes which continued overnight and have prompted dozens of students to flee to mainland China.

In Hong Kong’s financial centre, protesters stepped up their ‘blossom everywhere’ campaign of road blocks and vandalism by shutting down roads and rail links for the third day running.

Yesterday police said Hong Kong was on the ‘brink of total breakdown’ after a violent week in which a protester has been shot, a pregnant woman pepper-sprayed in the face and another man set on fire by activists. 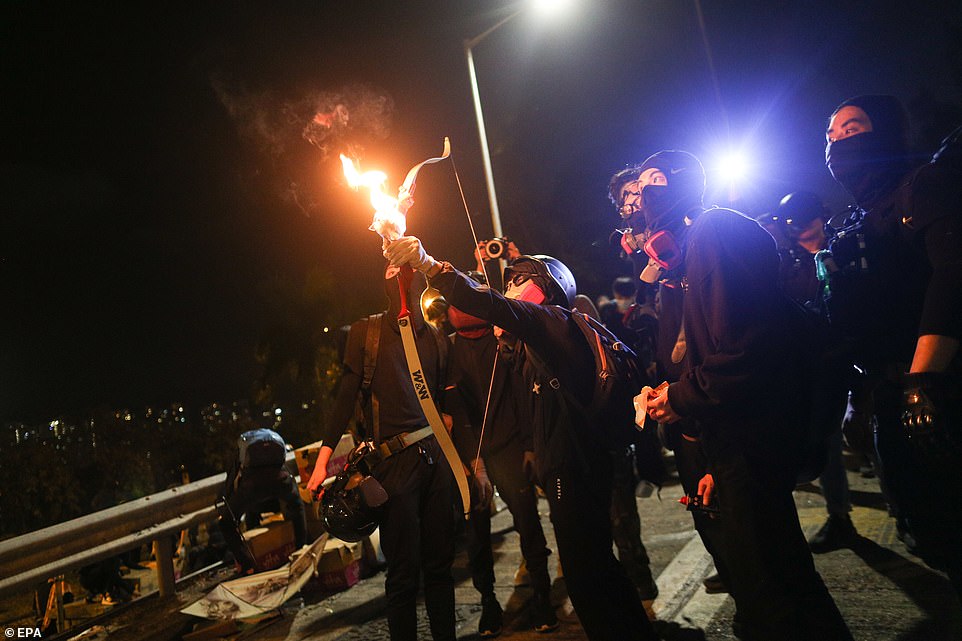 Flaming arrow: A masked protester prepares to fire their bow and arrow on the campus of the Chinese University of Hong Kong in the early hours of this morning, as clashes took place across numerous universities 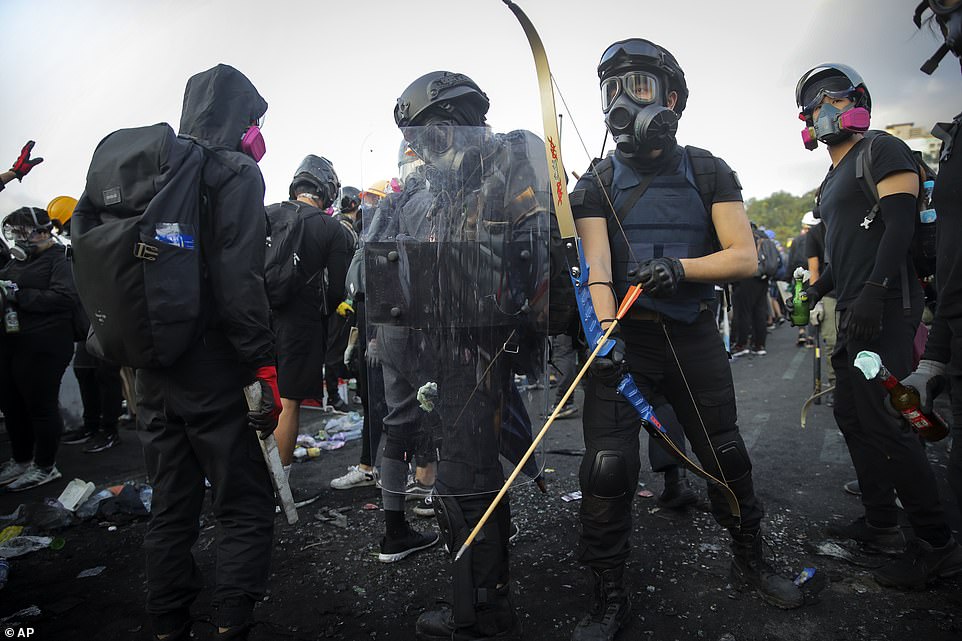 Armed: Students with home-made equipment including a bow and arrow and a riot shield, many of them wearing gas masks, take their position outside the Chinese University in Hong Kong this morning 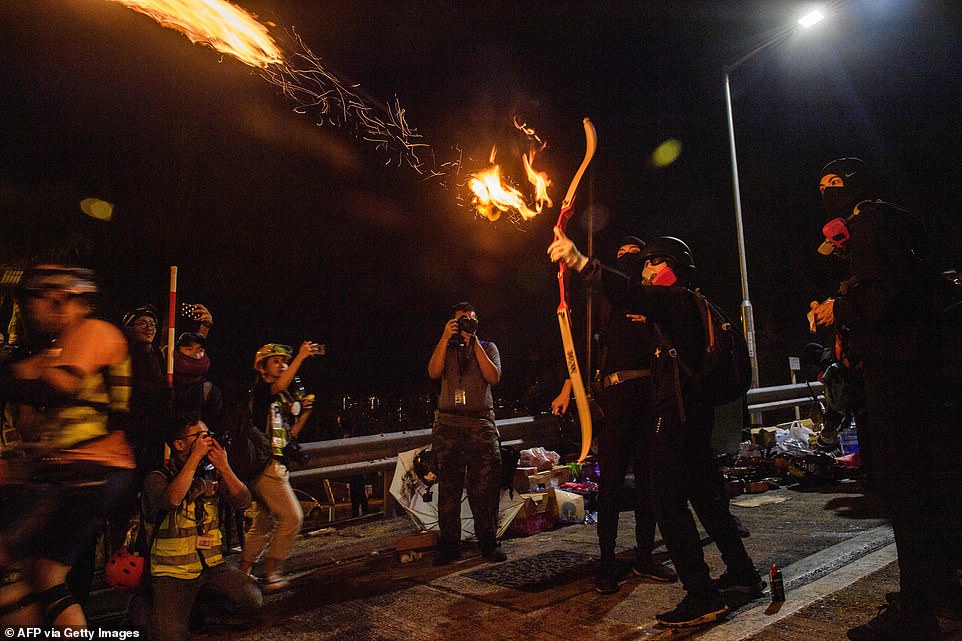 Unleashed: A protester releases a flaming arrow with his bow to light a barricade in the early hours of this morning as demonstrators battled with police on campuses through the night 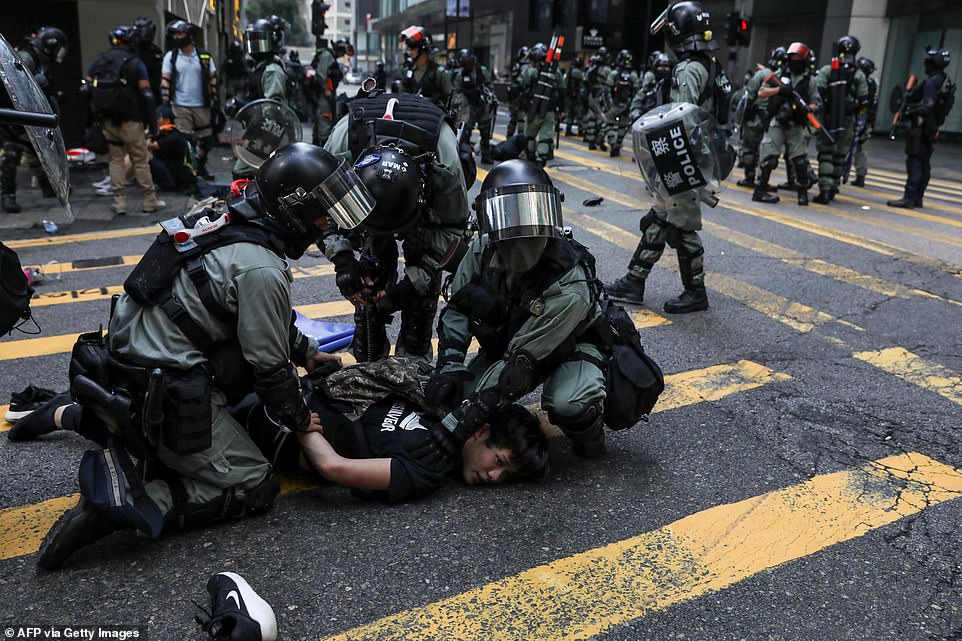 Detained: A man is pinned to the ground by riot police wearing helmets in the centre of Hong Kong today as demonstrators blocked roads and occupied the city centre for a third day running

Commuters across the city woke to the increasingly familiar scenario today of roads choked with bricks, bicycles, couches and other materials that had been laid out by the protesters overnight.

Scores of riot police tried to disperse the crowds, grappling some people to the ground and beating others with batons near the city’s stock exchange.

Various lines on the subway – used by more than half of the city’s 7.5 million people daily – were also suspended due to vandalism, forcing many workers to stay at home.

Classes were suspended at universities, and parents of school students were advised they could keep their children home.

The working-hours violence is a new phase in the protests, which had largely been confined to evenings and weekends until now. 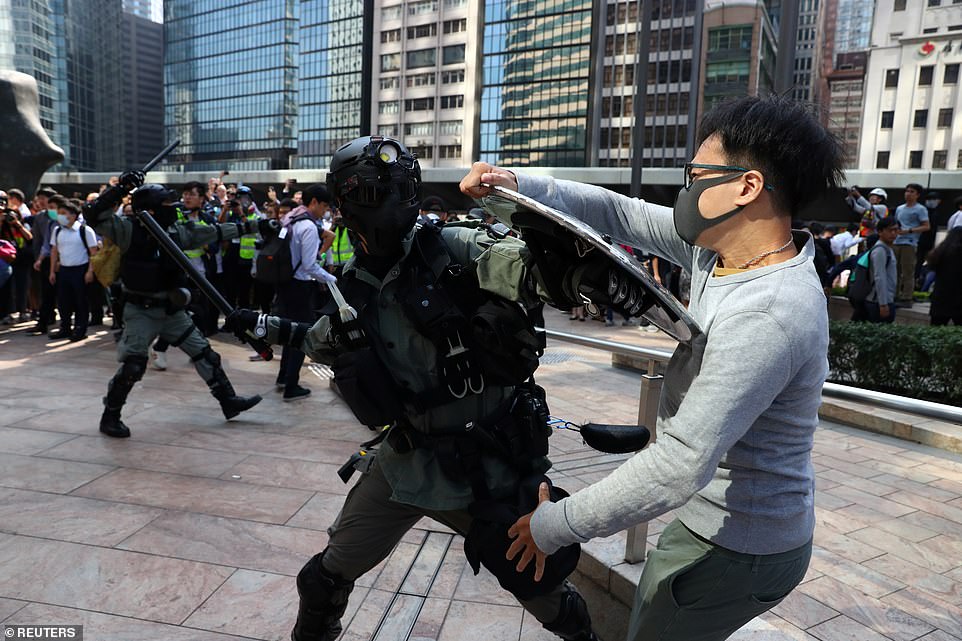 One on one: A masked riot police officer wields a baton at a protester using a makeshift shield to defend himself 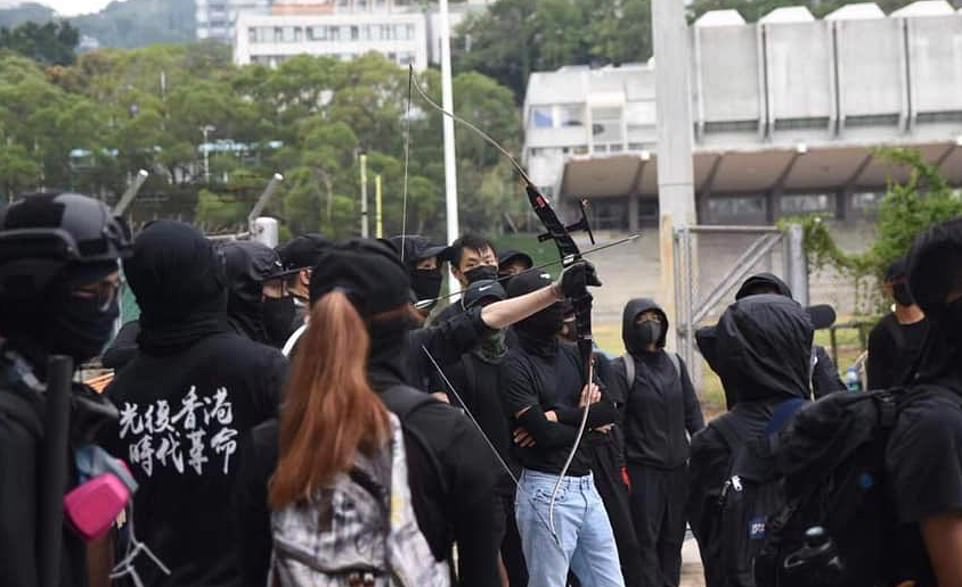 Launched: A protester aims a bow and arrow on the campus of City University, while other demonstrators wearing masks look on as the pro-democracy movement assembles on university campuses 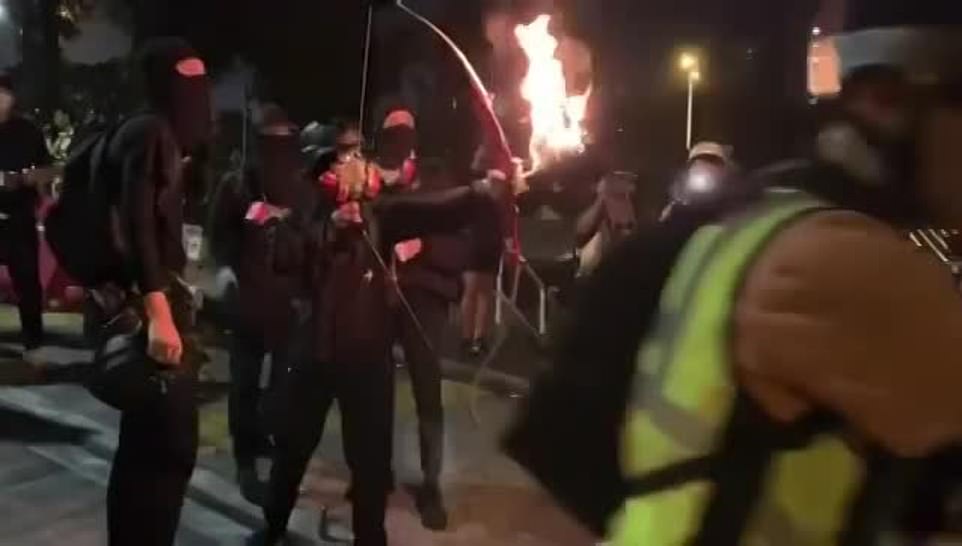 Burning: Another demonstrator prepares to unleash his flaming weapon as pro-democracy protesters dressed in black – and photographers in high-vis jackets – gather on a university campus last night 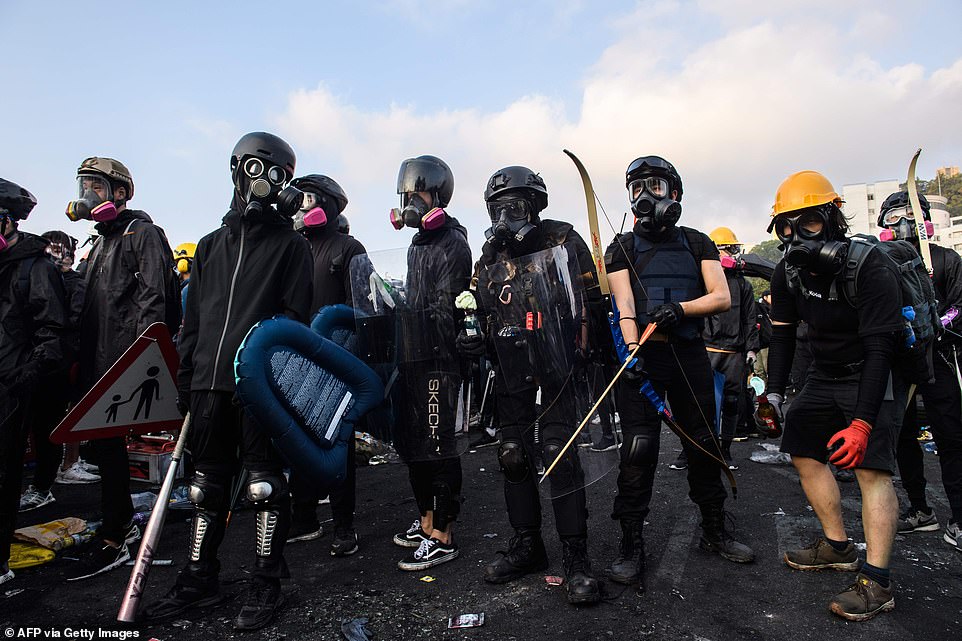 Prepared: Protesters with helmets, gas masks and various weapons including a baseball bat stand guard on a bridge over the Tolo Highway after they heard police were approaching at the Chinese University of Hong Kong

Police battled protesters at several university campuses, where gasoline bombs and fires lit the nighttime scene, and the situation remained tense in the morning.

The most intense clashes last night occurred at the Chinese University of Hong Kong, where pitched battles were fought with the police firing tear gas, water cannon and rubber bullets.

As well as firing bows and arrows, the protesters were throwing petrol bombs and bricks, paralysing the campus and the area around it.

Some students from mainland China have begun fleeing Hong Kong on buses and boats, according to police and universities.

The Hong Kong University of Science and Technology arranged a special bus service to shuttle students to a station where they can travel to the mainland. 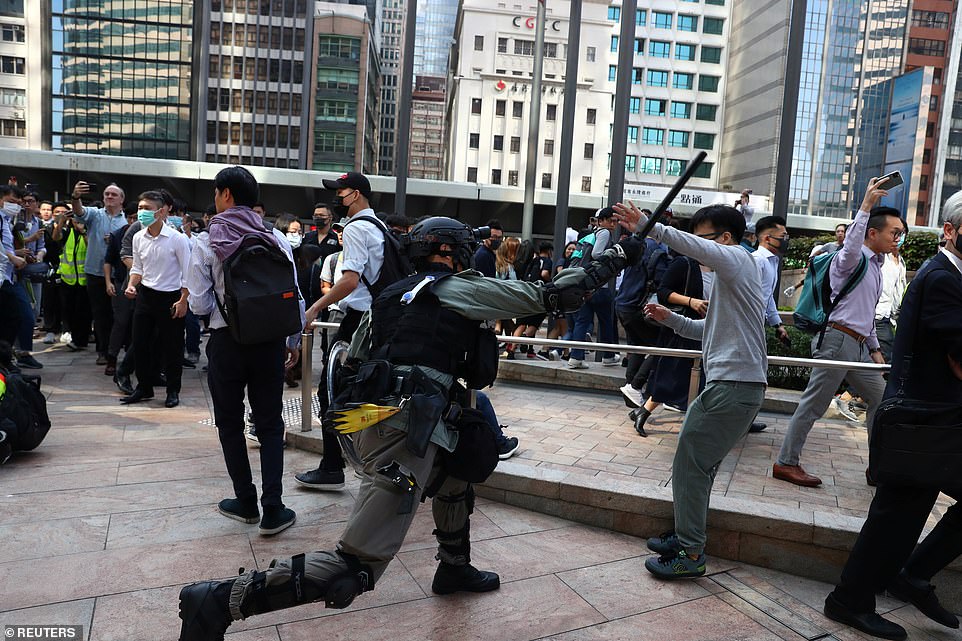 Clashes: A riot police officer with a baton scuffles with a protester in the Central business district of Hong Kong today 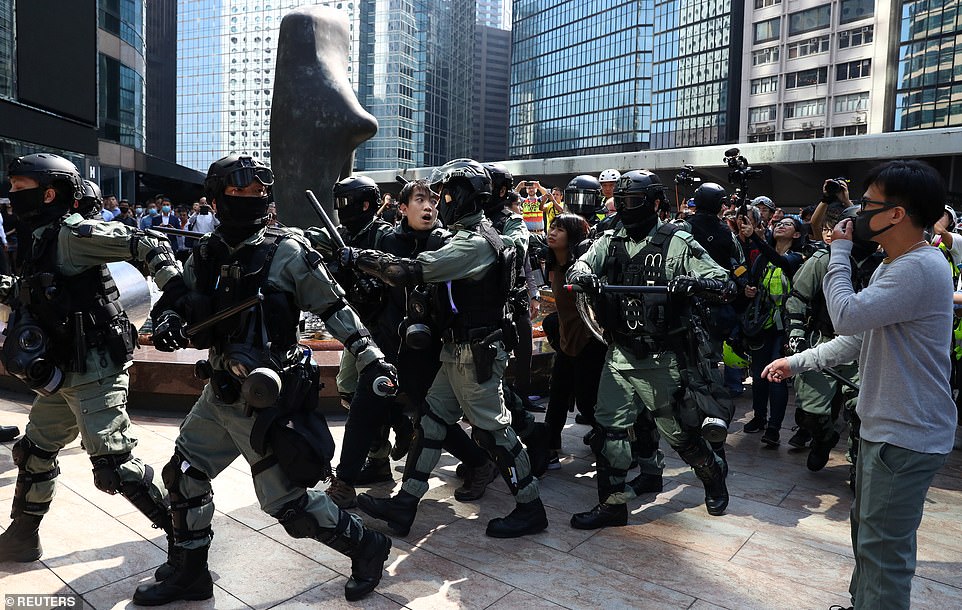 On guard: A squad of riot police officers wearing helmets and wielding batons detain a man as they try to keep order today 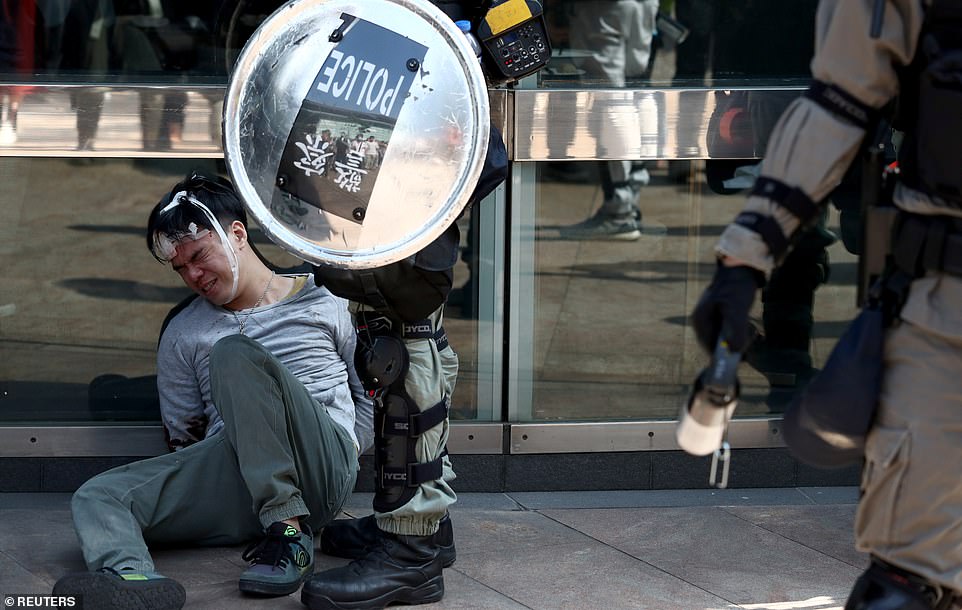 Injured: An anti-government protester with a bandaged face is held down by a riot police officer with a shield today

On Tuesday police said the protesters had committed ‘insane’ acts, throwing trash, bicycles and other debris on to metro tracks and overhead power lines.

‘Our society has been pushed to the brink of a total breakdown,’ Senior Superintendent Kong Wing-cheung told a briefing yesterday.

Police had yesterday fired volley after volley of tear gas in Central, where protesters blocked the streets and where most shops had pulled their shutters down today.

At Hong Kong’s City University, a group of protesters were seen firing a catapult from a footbridge. Another protester called Emily was wearing a black mask and swimming goggles on the front line on Tuesday.

Hong Kong leader Carrie Lam, speaking to media after a weekly meeting with advisers, called the blocking of the morning commute ‘a very selfish act.’

An already tense atmosphere worsened this week when one protester was shot and another man set on fire on Monday, leaving both men critically wounded on one of Hong Kong’s worst days of violence.

Yesterday footage appeared to show a woman being pepper-sprayed and wrestled to the ground by a group of armed police in Kowloon. 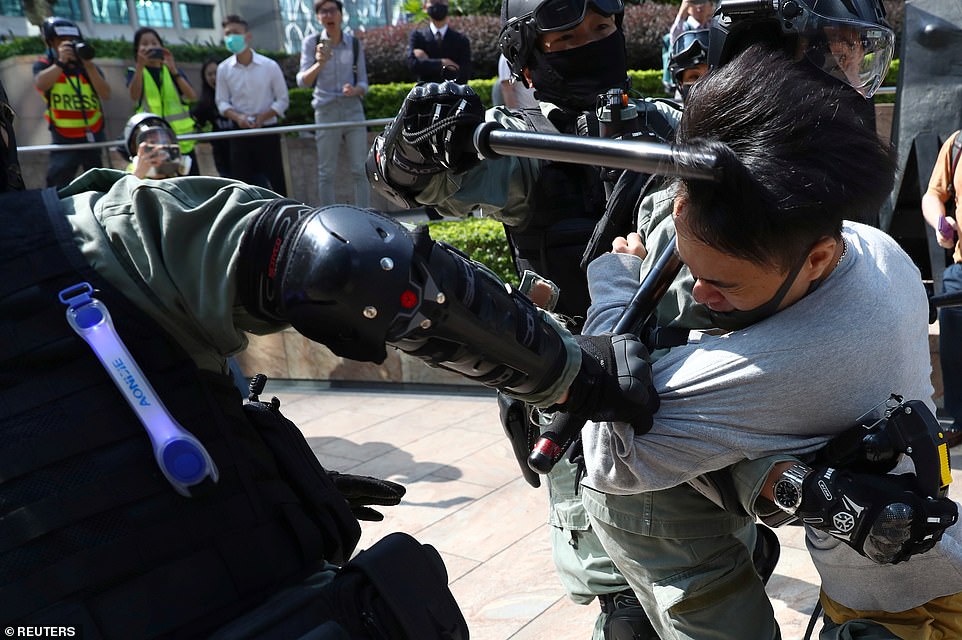 Violence: An anti-government protester is struck in the head as he is being detained by riot police officers 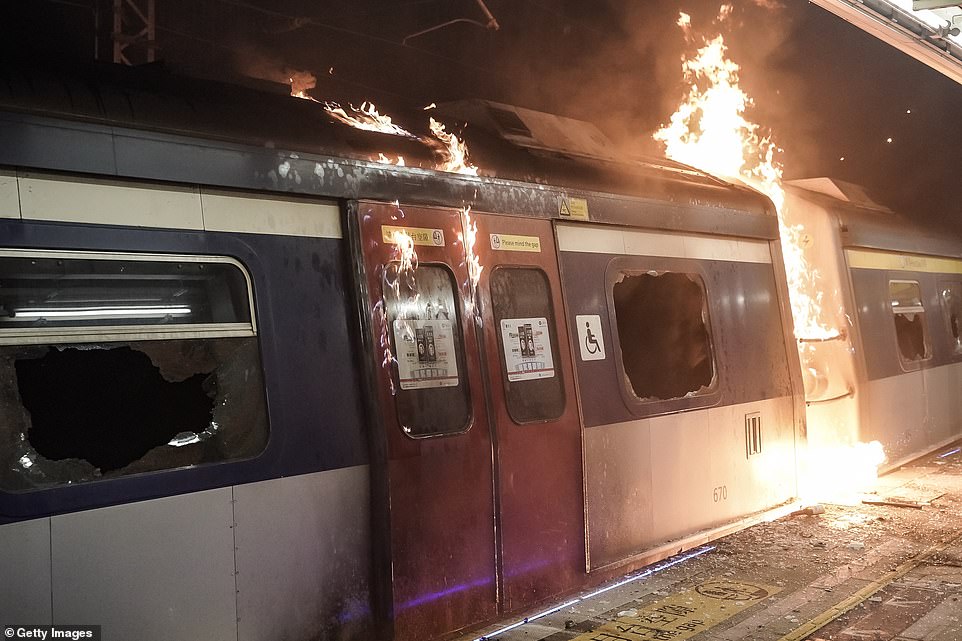 Engulfed: A Hong Kong metro train near the Chinese University of Hong Kong burns after it was set on fire by protesters 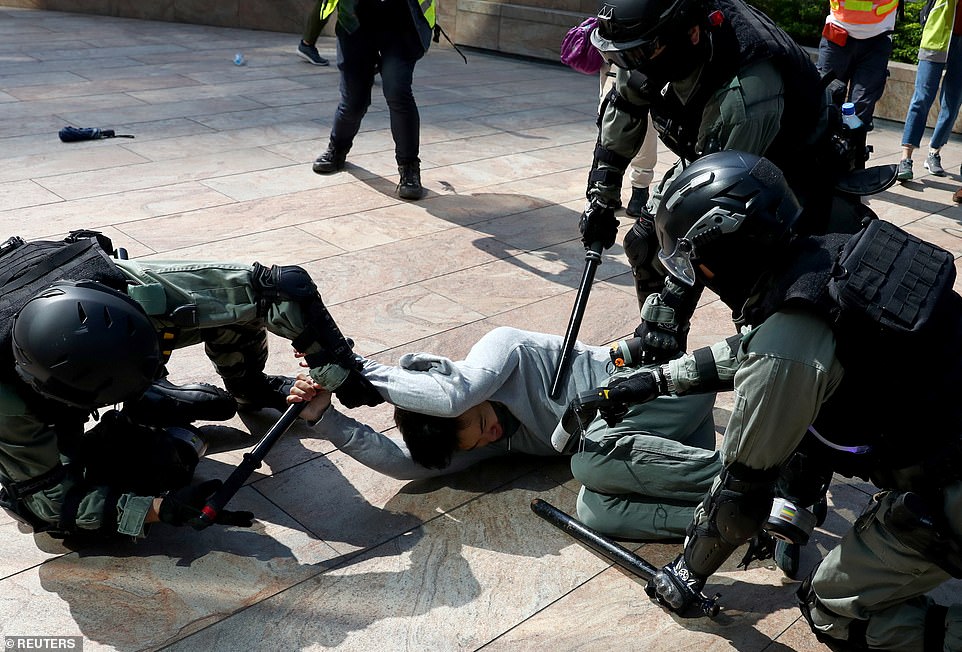 Stopped: Riot police officers detain a protester during an anti-government demonstration in the Central district of Hong Kong 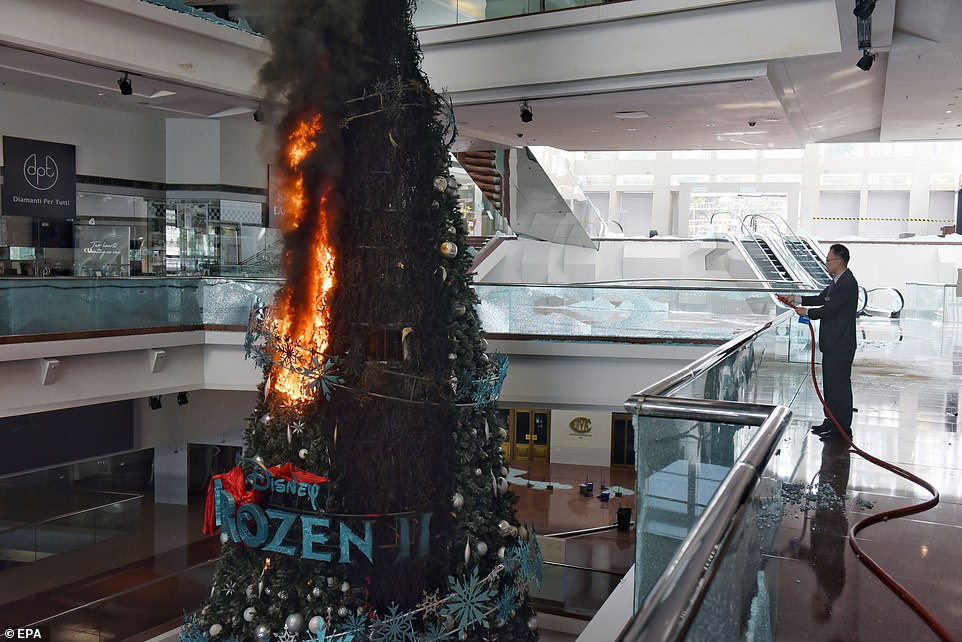 Aflame: A man with a hose tries to extinguish a burning Christmas tree in the Festival Walk shopping mall today

The protests were sparked by a since-abandoned bill that would have allowed extradition to mainland China.

However, they have mushroomed into a wider rebellion against Beijing and a demand for more democracy, including direct elections for Hong Kong leaders.

The bill sparked fears of Beijing’s influence in Hong Kong despite the freedoms guaranteed to the city when it returned to Chinese rule in 1997.

China guaranteed 50 years of freedoms, but 22 of them have passed already and young people in Hong Kong today will see that deadline expire in their lifetimes.

Police tactics during the demonstrations, in which more than 3,300 people have been arrested, have fuelled further anger and calls for an investigation into alleged brutality.

Protesters also want Hong Kong leader Carrie Lam to resign, but she remains in post and has refused to make any major concessions to the demonstrators. 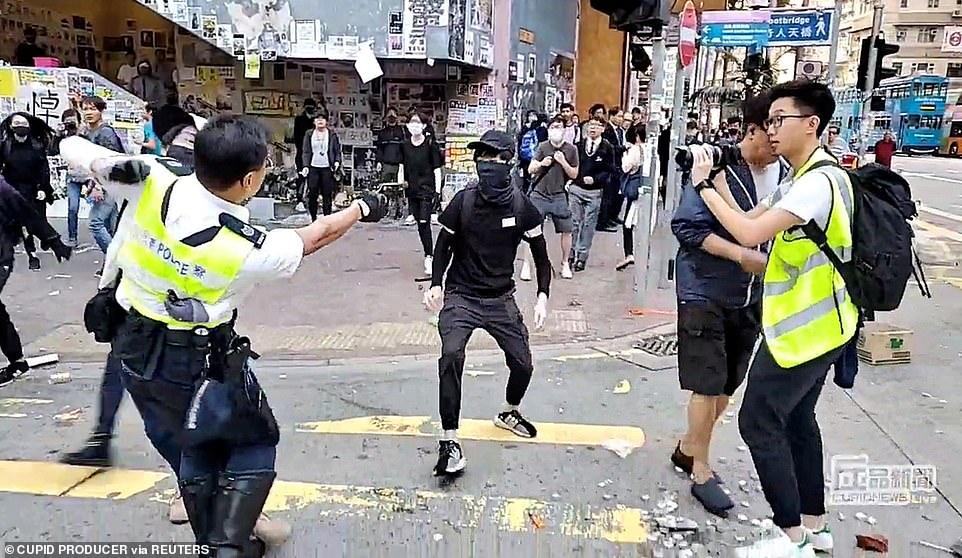 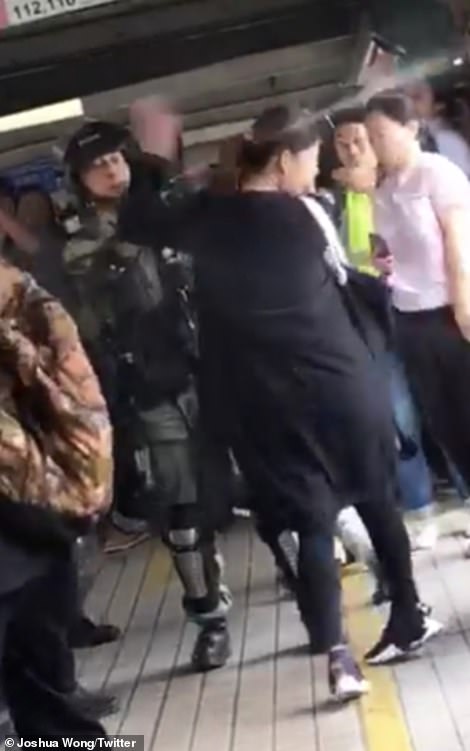 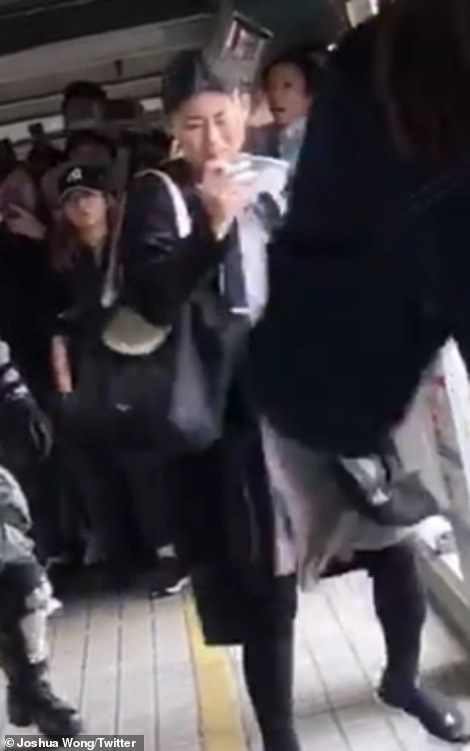