Daniel Craig looked bloody, battered and bruised on Tuesday afternoon as he made his latest appearance in southern Italy.

But fans needn’t worry, the British actor was only dressed in character as he filmed his latest dramatic scenes as James Bond on the set of forthcoming film No Time To Die.

The actor has been hard at work since arriving in picturesque Matera over the weekend, where he is putting the finishing touches to his fifth and final outing as the legendary secret agent. 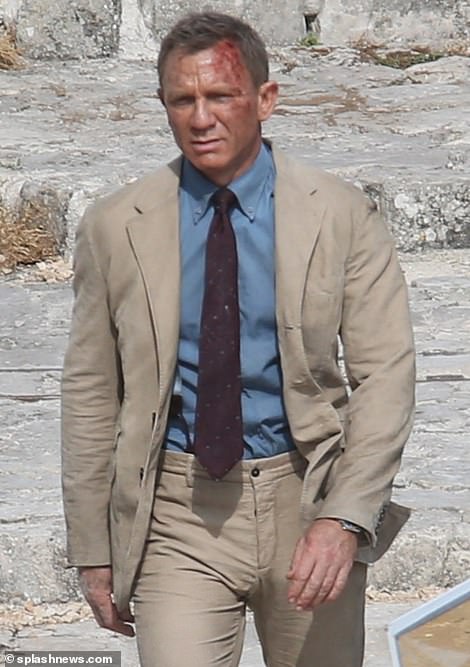 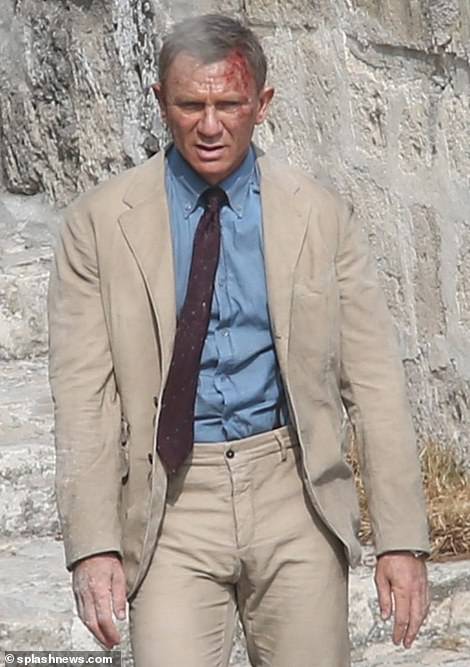 Hello Mr. Bond, we’ve been expecting you: Daniel Craig looked bloody, battered and bruised on Tuesday afternoon as he made his latest appearance as James Bond in southern Italy

Cameras rolled as Craig, 51, wearily descended a set of winding stone steps, the bloody gash on his forehead suggesting he was searching for safety after another potential brush with death.

Despite sporting a smart tan suit over a blue dress shirt and maroon tie, the actor looked tellingly dishevelled and notably dusty following his latest clash.

Craig was later accompanied by a stunt double, who wore an identical suit after joining him on the steps as his exterior scene was completed. 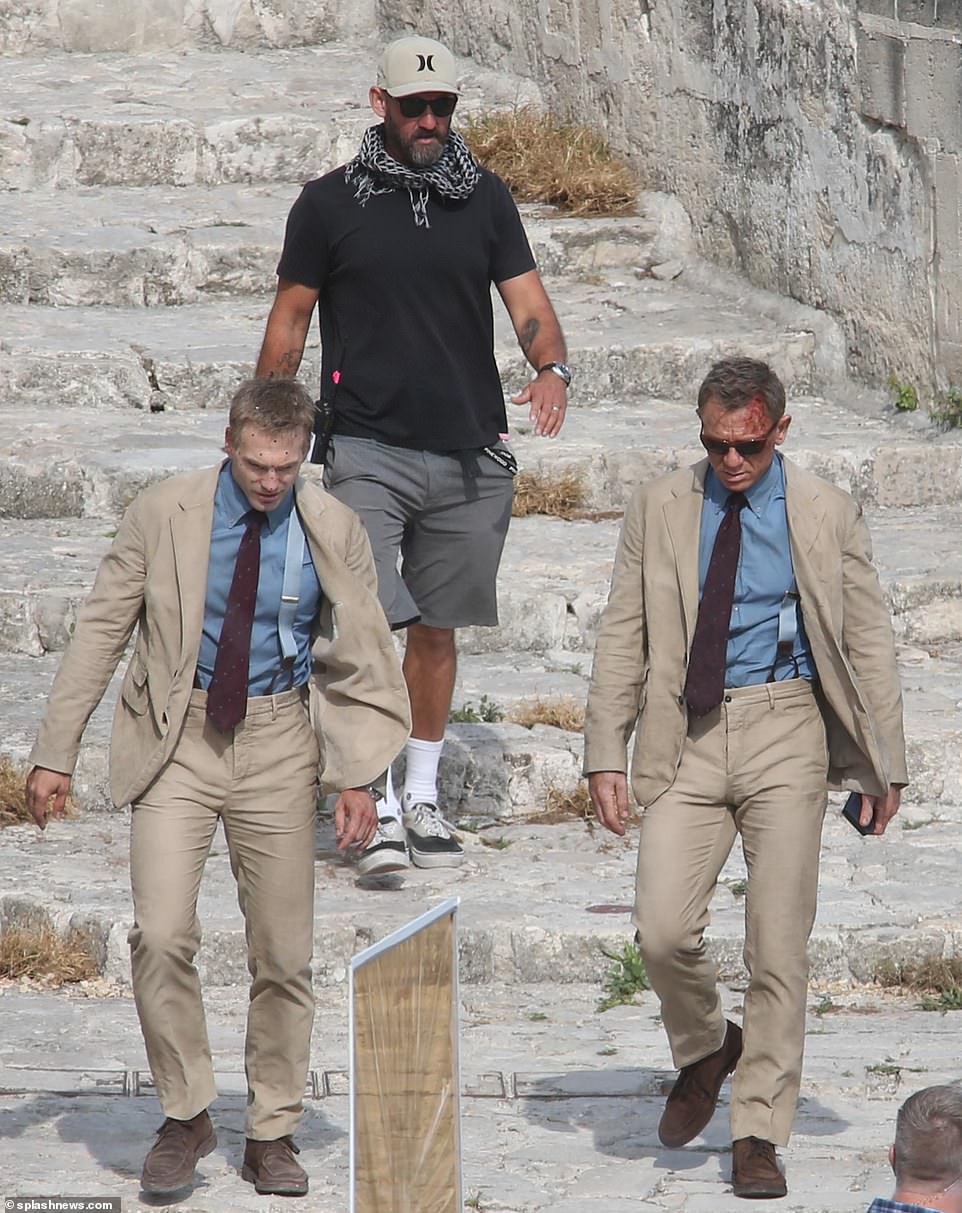 In good company: The actor was joined by a stunt double, who wore an identical suit after joining Craig on the steps as his exterior scene was completed on the set of No Time To Die in picturesque Matera 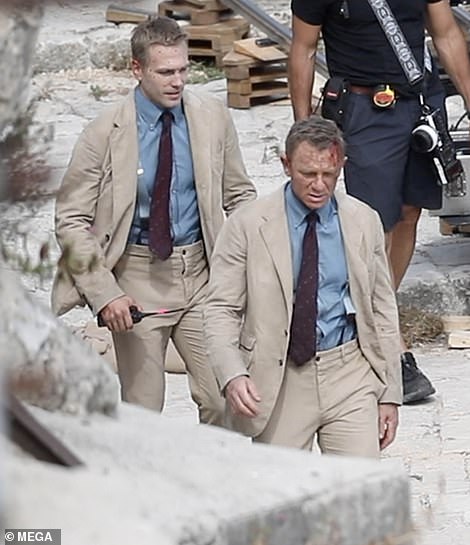 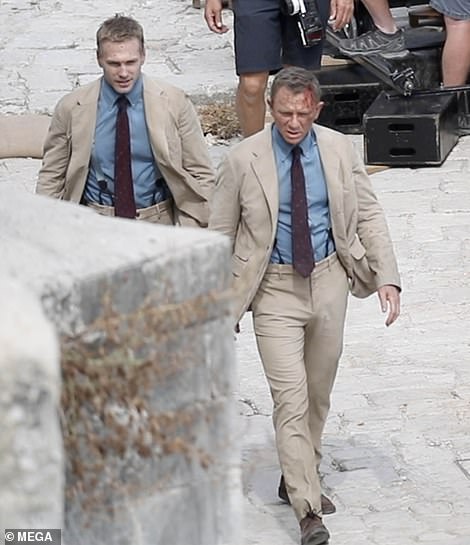 Let’s go: The double, who sported motion capture sensors across his face, trailed Craig down the winding steps 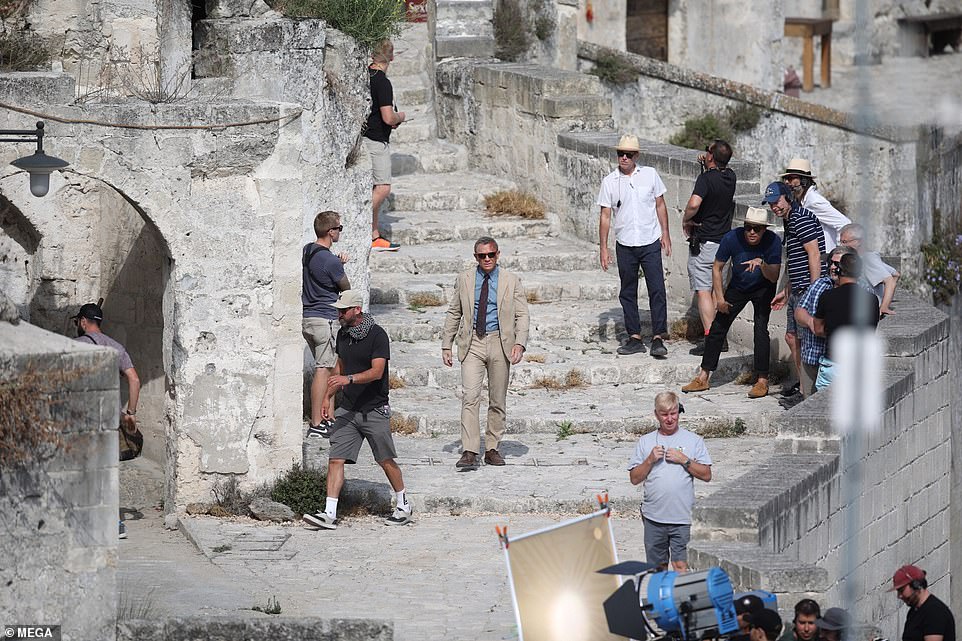 Don’t mind me: The production team looked on as Craig made his latest appearance as Bond on Tuesday

Stunt doubles and drivers have been a regular presence in Matera over recent weeks, with a second unit filming chase scenes around the town’s winding, narrow streets.

And Bond’s latest sported motion capture sensors across his face, a feature commonly used to keep track of movement in high-tempo scenes so CGI rendered images can look as life-like as possible.

The pair were tracked by director Cary Joji Fukunaga, who sported a wide-brimmed hat while watching Craig’s descent with members of his production team. 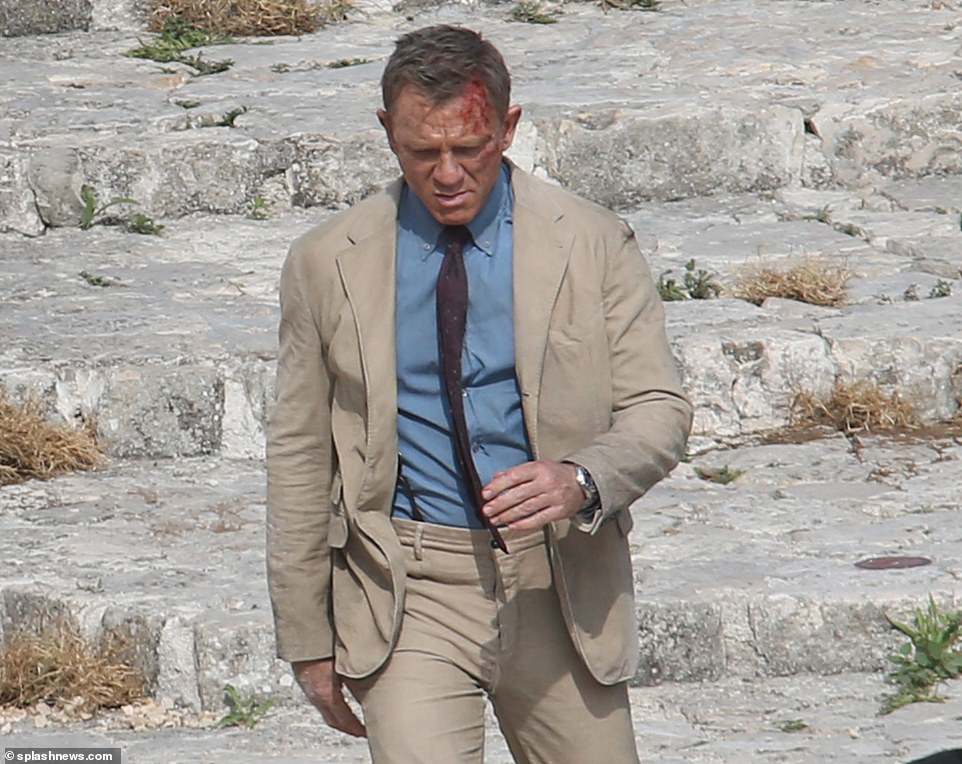 Weary: Craig looked exhausted after filming his latest physically draining scene on the set of his fifth and final outing as James Bond 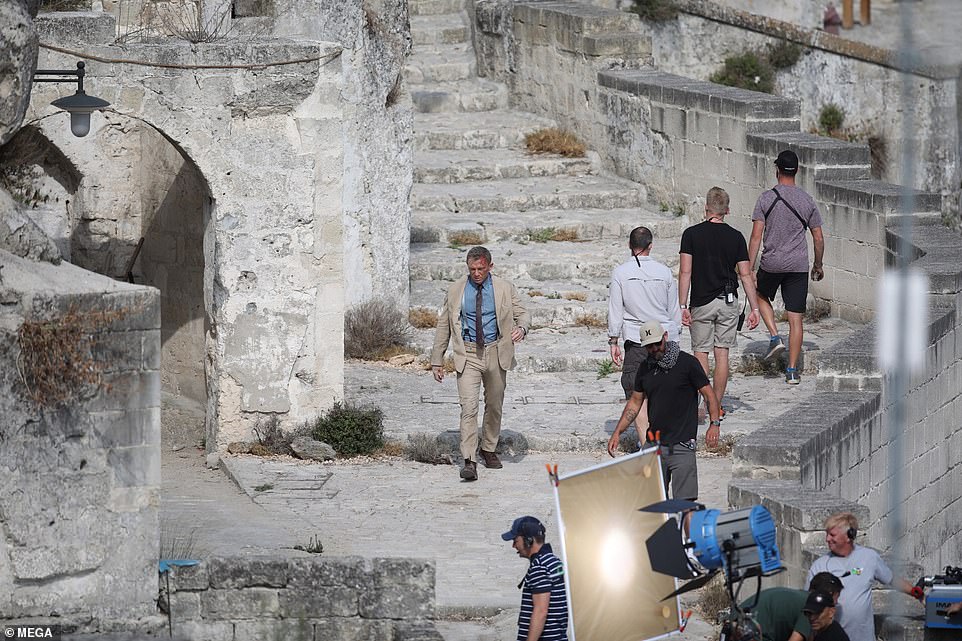 Busy: Matera is the latest stunning backdrop to be used in No Time To Die, with the production already taking in locations across Norway, Jamaica, England and Scotland 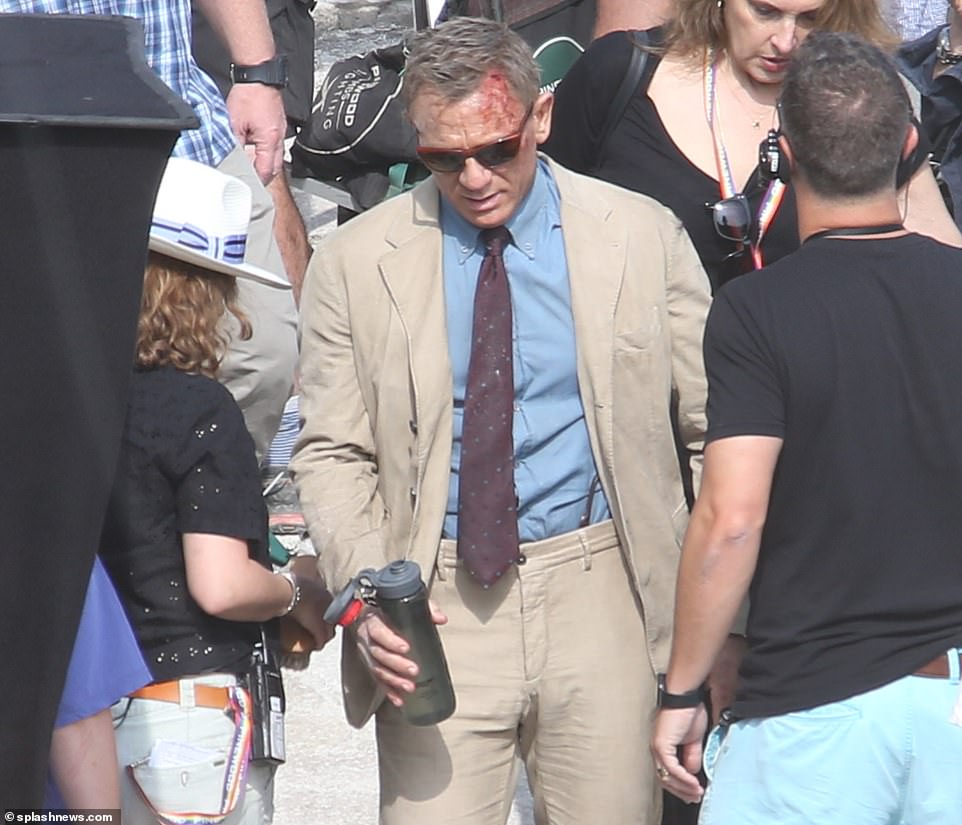 That’s better: With temperatures still high in southern Italy, Craig stayed hydrated as his latest scene came to an end

Bond’s iconic car, a vintage DB5 Aston Martin, has also been a prominent feature since the production landed in Italy, with the vehicle either being pursued, or finding itself in hot pursuit of other vehicles throughout many of the new film’s latest scenes.

However it was not present on Tuesday as Craig got to work with his stunt-double, Fukunaga and a small, mobile camera unit.

No Time To Die is co-written by Fleabag and Killing Eve creator Phoebe Waller-Bridge, who was brought on board to sprinkle her magic on the script for the 25th movie in the film franchise based on Ian Fleming’s hit novels. 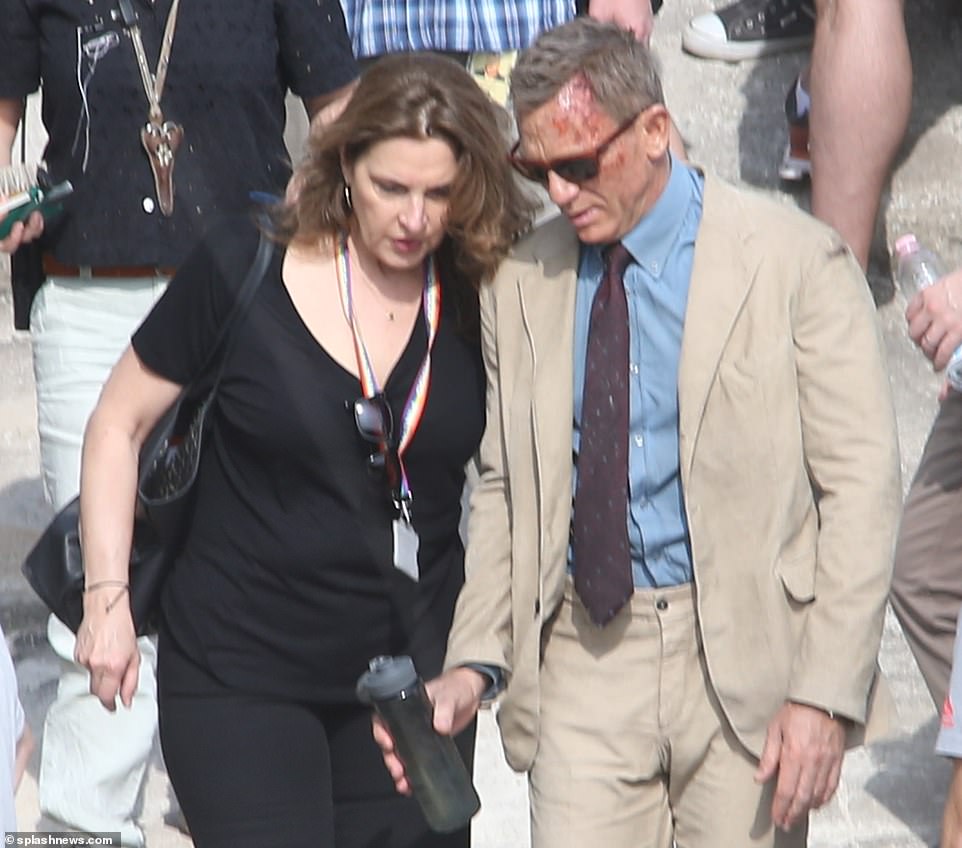 Plenty to talk about: Craig was joined by a female assistant as he relaxed between takes on Tuesday 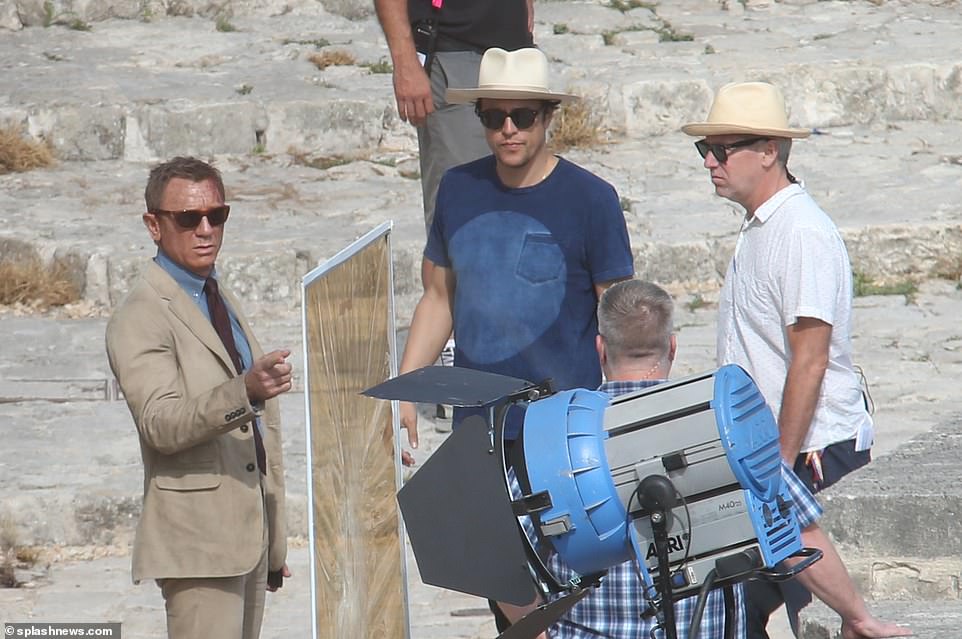 What’s this? The British actor discussed the day’s developments with director Cary Joji Fukunaga and various members of the production team

The film had previously been been given the working title Shatterhand, however the title has since been changed to match Bond’s more iconic film titles.

Production finally kicked off in April of this year, though it had already been delayed by several months following the departure of original director Danny Boyle. 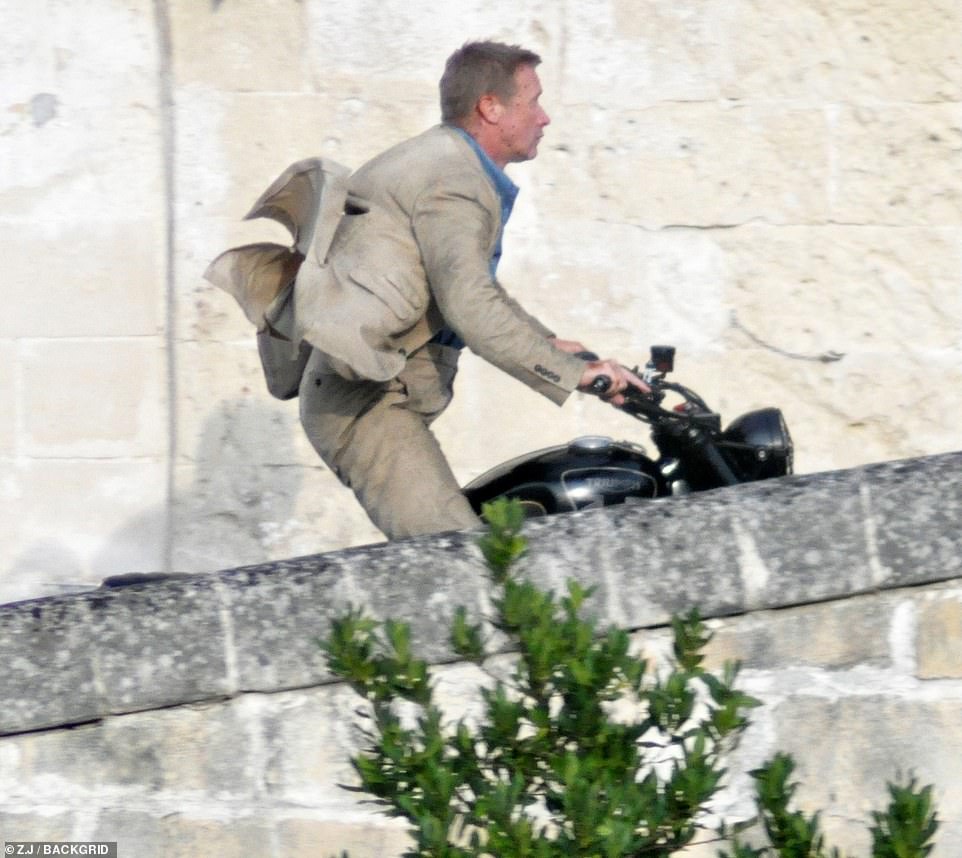 Watch out: Craig’s stunt double was seen racing a motorbike across a narrow balcony 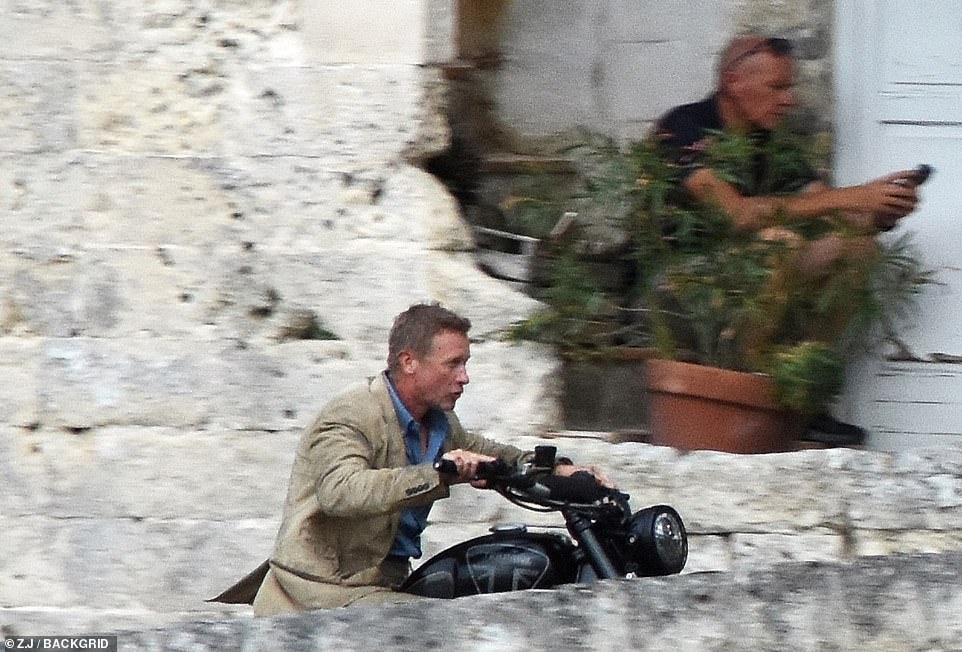 Realistic: The double was an absolute match for Craig as he whizzed past at high-speed on Tuesday 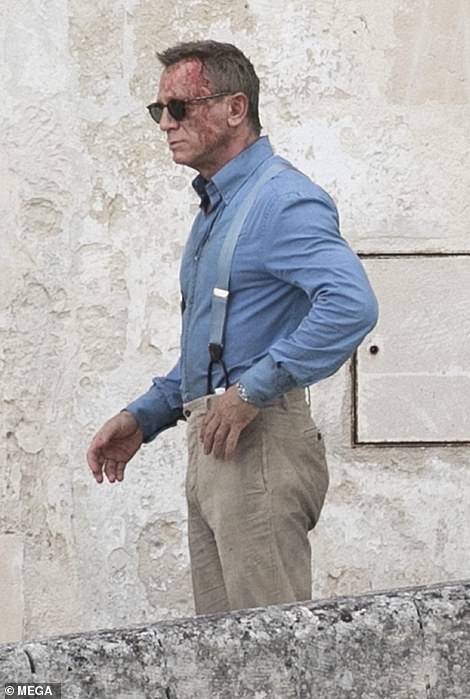 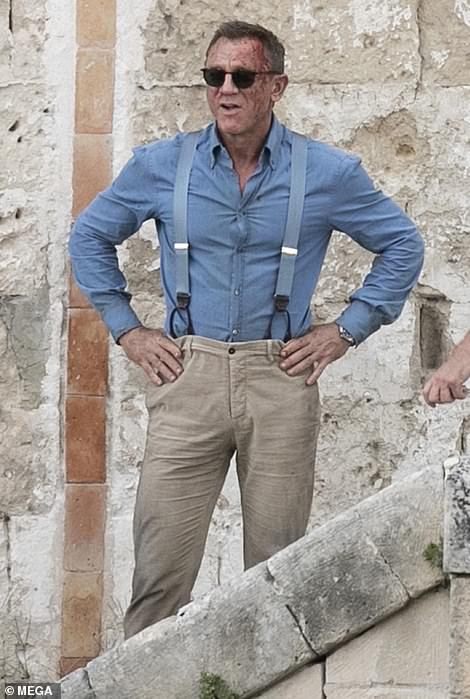 Put through his paces: Earlier that day Craig emerged covered in fake blood as he took a break from shooting his final film as the iconic secret agent in Matera 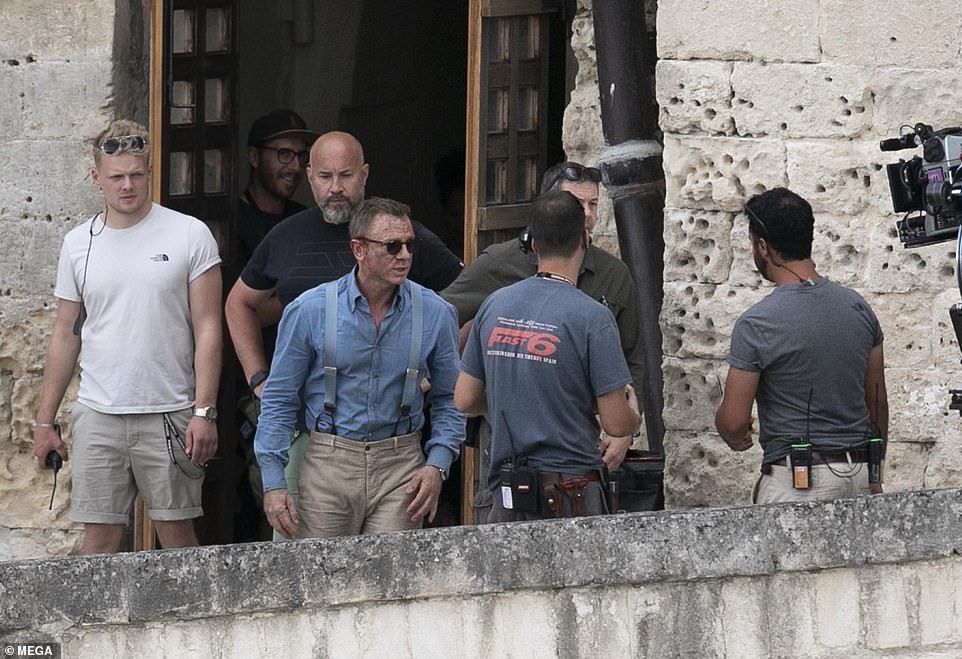 Time for a breather: Daniel was seen leaving a building pocked with bullet holes during a break between scenes

But it has suffered a turbulent production process in recent months after Craig suffered a nasty ankle while filming a separate chase sequence in Jamaica, the spiritual home of Bond creator Ian Fleming.

The actor underwent an operation followed by two weeks of rehabilitation in May, causing major delays to the long awaited production.

The official Twitter account for Bond 25 released a statement concerning his injuries at the time, writing: ‘Daniel Craig will be undergoing minor ankle surgery resulting from an injury sustained during filming in Jamaica.

‘Production will continue whilst Craig is rehabilitating for two weeks post-surgery. The film remains on track for the same release date in April 2020’.

The British star was said to have flown to New York City for treatment, but was thought to be ‘furious’ that he injured himself after months of gruelling preparation for the role.

There it is: Bond’s iconic Aston Martin DB-5 has featured prominently in many of the  scenes shot around Matera over recent weeks, but it was not present on Tuesday

Meanwhile over at the UK’s Pinewood Studios three explosions went off on set after a stunt went wrong during filming last month.

Health and Safety officials arrived on the set of the beleaguered movie after an explosion ripped a hole in a sound stage and injured a member of the crew.

The official Twitter account for the 007 franchise confirmed the blasts, with a post saying: ‘During the filming of a controlled explosion on the set of Bond 25 today at Pinewood Studios, damage was caused to the exterior of the 007 Stage.

‘There were no injuries on set, however one crew member outside the stage has sustained a minor injury.’ 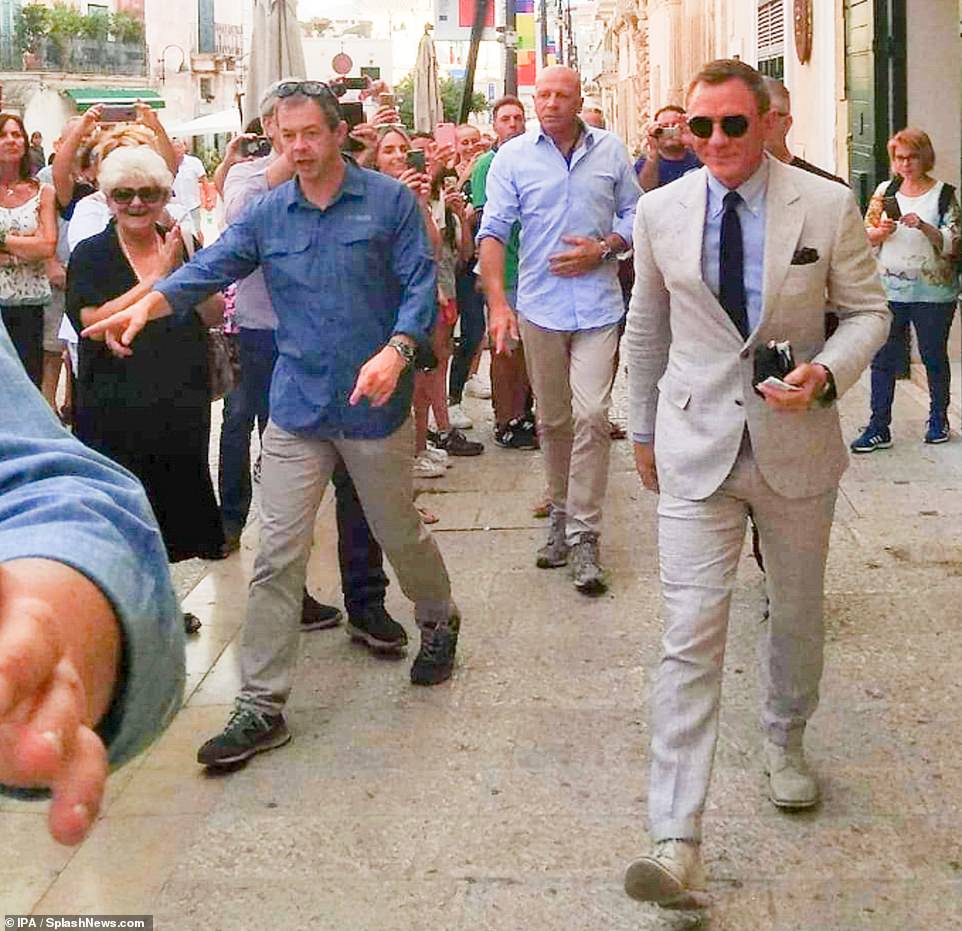 Here he comes: Craig was surrounded as he made his first appearance on set in southern Italy on Monday

Filming for the movie began in April, four years after previous Bond film, the much maligned Spectre, was released.

Yet it has been claimed the screenplay for the film is being endlessly re-written by a committee consisting of director Fukunaga, Waller-Bridge and leading man Craig.

‘She’s writing a re-write of a re-write,’ a source told the Daily Mail’s Baz Bamigboye of Waller-Bridge’s recent involvement in the project.

‘They have an outline of plot, but dialogue is all last-minute. It’s not the way to make a movie. I would imagine they’ll sort it out in the cutting room. That’s where most movies get made anyway. But you’d think the Bond lot would be more together.’ 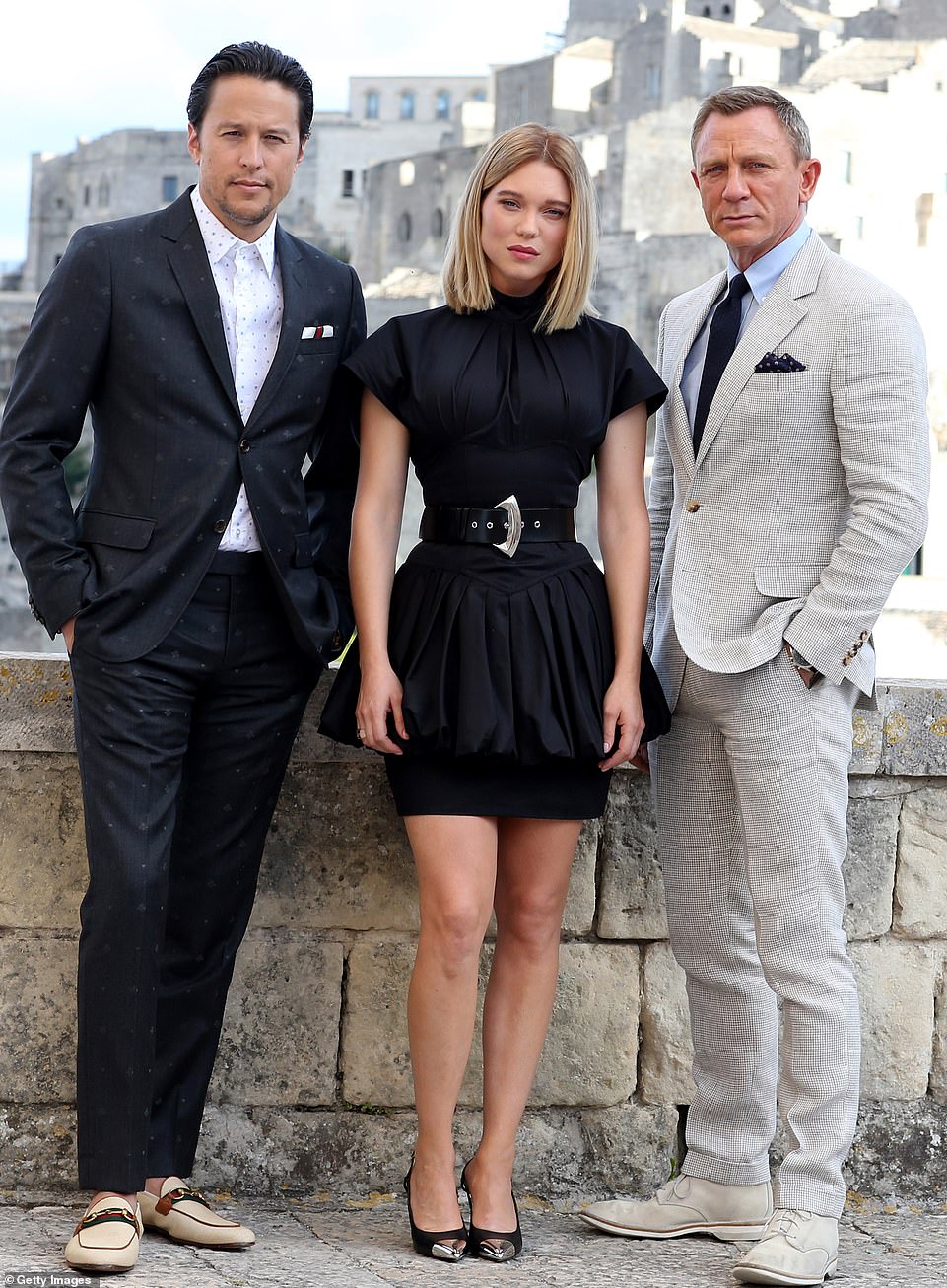 They’re back: (L-R) Cary Fukunaga , Léa Seydoux and actor Daniel Craig reunited for a photocall in Italy before filming commenced

Bond is well-travelled in Italy, having had scenes over the years in Venice, Rome, Siena, by Lakes Como and Garda, in the mountains of Cortina D’Ampezzo and on the Sardinian coast, but this is the first time the secret agent has headed to the far south.

Some 400 jobs are expected to be created through production.

His distinctive Aston Martin has also featured in Goldfinger, Thunderball and GoldenEye and has been a staple feature in the Bond series since 1964.

The film has also featured shoots in Norway, Jamaica and the UK.