But the Kyle and Jackie O Show producer is looking better than ever following the controversy, debuting his impressive weight loss on Instagram last week.

Over the past few months, the radio prankster has shed over 12kg with the help of personal trainer Richard Kerrigan and Married At First Sight star Ryan Gallagher. 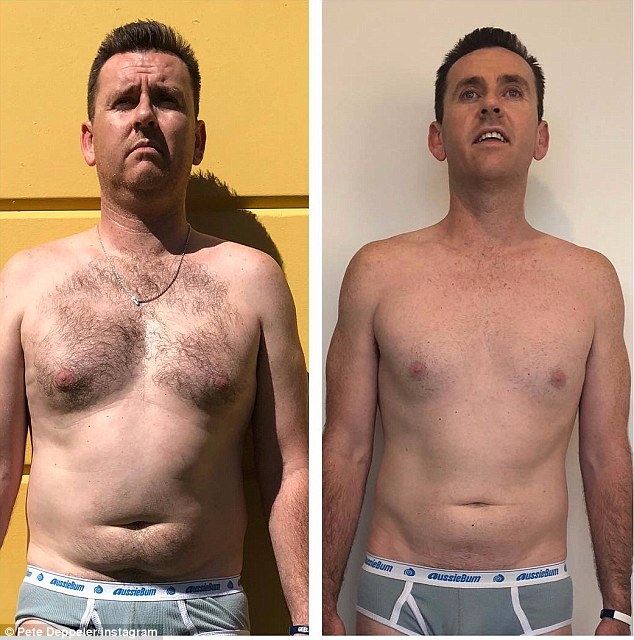 Jackie O isn’t the only one slimming down! KIIS FM’s ‘Intern’ Pete Deppeler has debuted his body transformation after losing 12kg. Left: Before his weight loss, right: last week

Pete, who has lost an impressive 12.4kg and shed 12.7 per cent of his body fat, recently shared his body transformation with his Instagram followers.

In terms of his measurements, Pete has cut 10.5cm from his chest, 13cm from his waist and a further 7cm from his hips.

Lately, he has been training hard for the 14 kilometre fun run City2Surf, which takes place in Sydney on Sunday, alongside MAFS star Ryan and colleagues at KIIS FM.

Looking good! Pete, who has lost an impressive 12.4kg and shed 12.7 per cent of his body fat, recently shared his body transformation with his Instagram followers. Pictured left: Pete at the 2016 Logie Awards in Melbourne, and right: Pete training on July 20, 2018

Pete has also enlisted the help of personal trainer and nutrition coach Richard Kerrigan to help him achieve his fitness goals.

Richard took to Instagram last week to reveal the secrets to Pete’s transformation, adding that he has adopted several lifestyle changes – including quitting smoking.

‘The cigarettes have gone and he hits a five-kilometre Park Run every weekend. I’m slightly nervous as to what’s next after City2Surf as this guy has a new mindset to do anything!’ 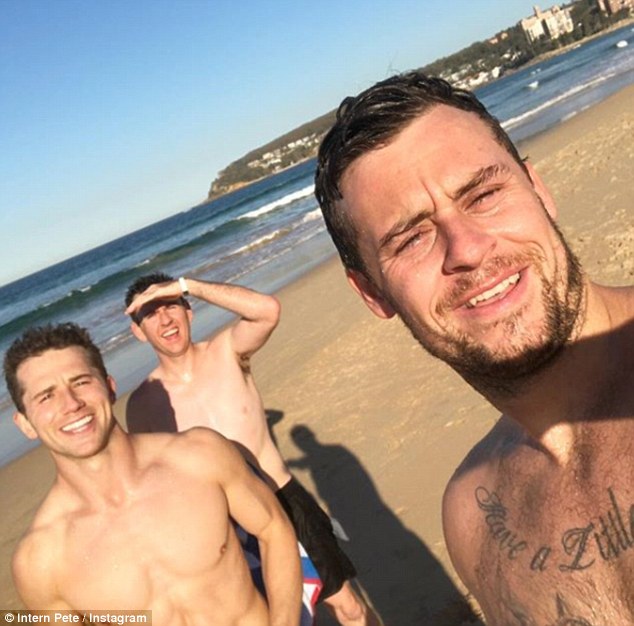 Famous friends! Lately, Pete has been training hard for City2Surf, which takes place in Sydney on Sunday, alongside MAFS star Ryan Gallagher (right) and colleagues at KIIS FM

Meanwhile, Pete told Daily Mail Australia on Tuesday: ‘Losing the weight has changed my life. Not just physically but mentally too!

‘My breakfast used to be a coke and leftover takeaway from the night before, but now I have a healthy breakfast smoothie or some eggs with soy and linseed bread. I love Richard’s recipes. Not only are they healthy but they taste great too!’

When Pete started the The Beach Life’s 12-week Fuel and Fitness plan, he did zero exercise and smoked up to 25 cigarettes daily.

He would never cook for himself and at only 35, he was rapidly ruining his health and throwing money away.

‘Now I feel better than I have ever felt in my life and I save money!’ Pete said. ‘I run daily, I cook my own healthy meals and I even plan to run a marathon one day. I’m a completely different person!’ 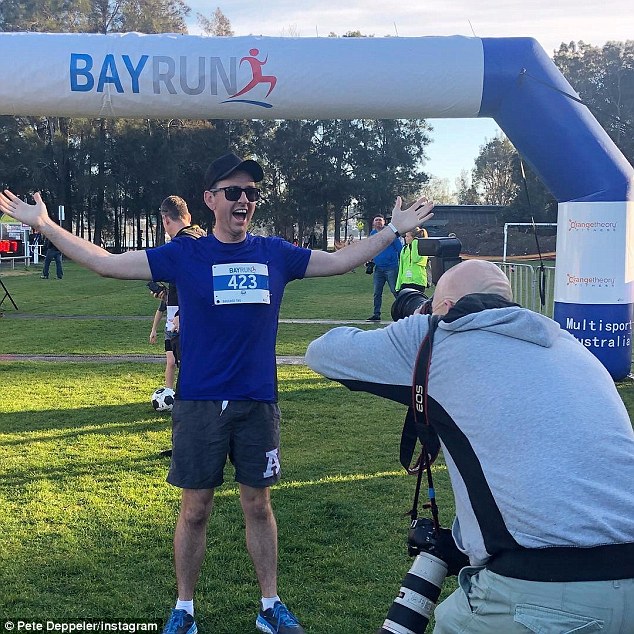 Check this out  Doctor convicted over child´s death should not be...

Run, Petey, run! Pete has also enlisted the help of personal trainer and nutrition coach Richard Kerrigan to help him achieve his fitness goals. Pictured: Pete completing the Bay Run over the weekend

Fitness wise, Richard got Pete into the regular habit of running each day.

‘Before I started the program I couldn’t run more than one kilometre,’ Pete said. ‘Then I started running five kilometres, but it would take me around 45 minutes. Now I can run it in 22 minutes!’

‘They keep joking that I might be turning into him and the more weight I lose, the less funny I become!’ Pete joked.

Pete, who is now a svelte 72kg, added that he has not only lost weight but gained muscle in all the right places. 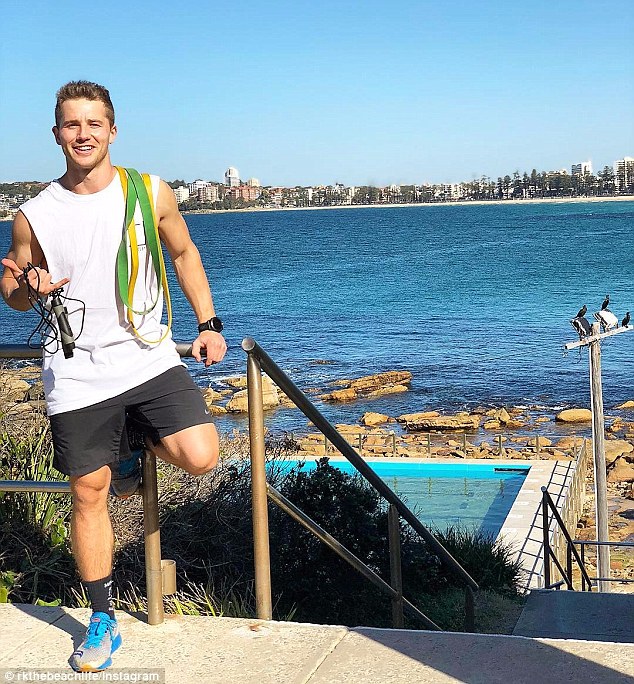 Pete’s dramatic weight loss comes after he interjected with a bizarre observation about Married At First Sight during Steve Smith’s apologetic post ball-tampering scandal press conference in Sydney on March 29.

‘Steve, I am going to take a different tack on this one – Intern Pete from The Kyle and Jackie O Show here,’ Pete began.

‘I want to let you know the perspective from non-sports committing Australians, to see you upset tonight is very sad.

‘Because what has actually been worse is what Dean and Davina did on Married At First Sight.’

As Steve appeared somewhat affronted by the strange comment, Intern Pete was abruptly cut off by event organisers. 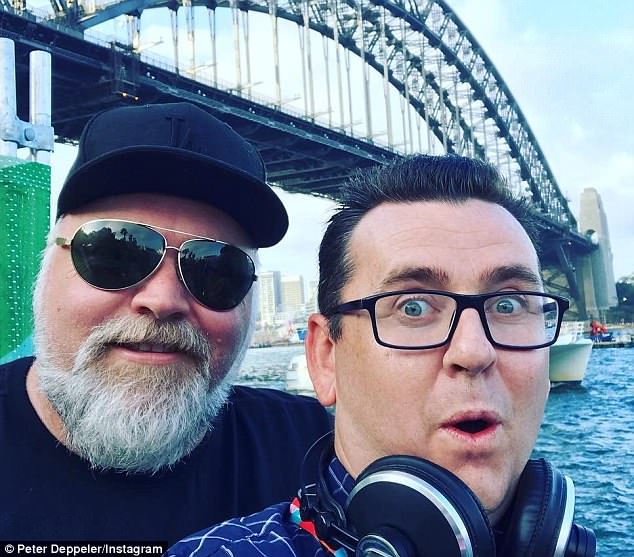 Afterwards, he received death threats from cricket fans and was publicly criticised on Twitter by journalists Rebecca Maddern and Michael Rowland, among others.

Pete has always maintained he ‘genuinely felt for Steve’ was ‘[trying] to inject some warmth to what was a difficult situation’ for the disgraced sportsman.

Steve and vice-captain David Warner were slapped with 12 month bans from the sport for their role in cheating during the third Test against South Africa.

An investigation by Cricket Australia found that Steve knew of David’s plan to get player Cameron Bancroft, who landed a nine-month ban, to tamper with a ball using sandpaper during a game in Cape Town on March 24. 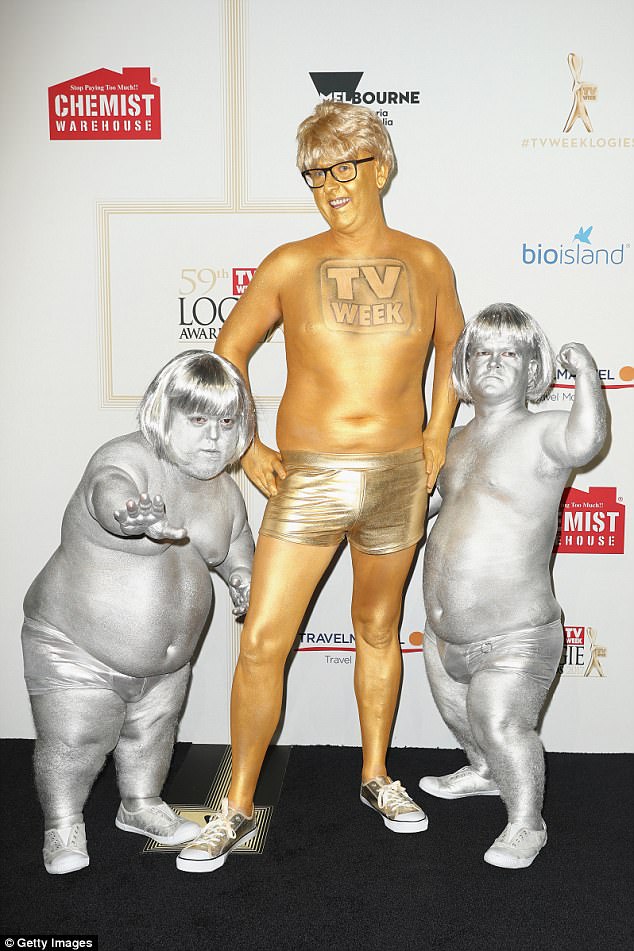 Back in the day: Pete is pictured at the 59th Annual Logie Awards at Crown Palladium on April 23, 2017 in Melbourne