The return of the Boeing 737 MAX may be delayed even longer.

The jetliner blamed in two deadly crashes that killed 346 people was discovered to have had a glitch in flight computer software that was rewritten after the tragedies, sources have told ABC News.

Two separate flight control computers were discovered not communicating on startup as expected during an audit meeting with regulators last weekend, the news outlet reports. 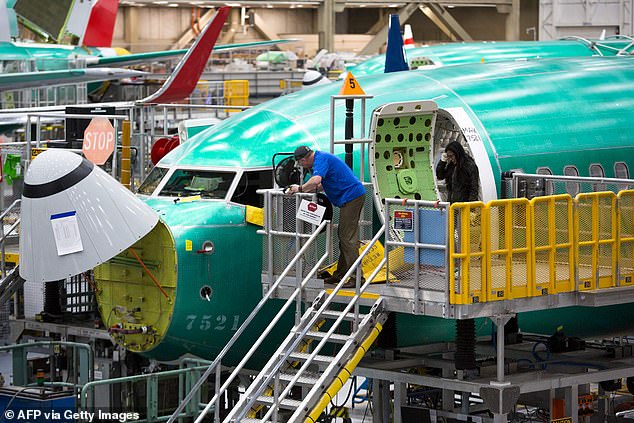 Sources say the Boeing 737 MAX jetliner, blamed in two deadly crashes that killed 346 people, was discovered to have had a glitch in flight computer software that was rewritten after the tragedies. Pictured: Employees at work on a MAX at the Boeing’s Renton, Washington, factory 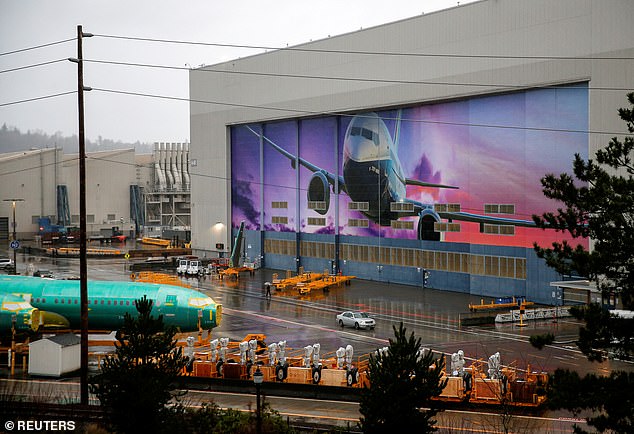 Flight control computers on the MAX were not communicating on startup as expected during an audit meeting with regulators last weekend, leaving it uncertain when the plane will fly. Boeing 737 Max fuselages are seen at the company’s Renton, Washington, plant last week 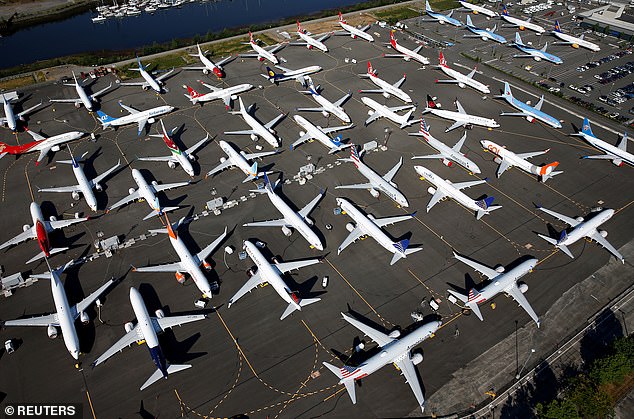 Dozens of grounded Boeing 737 MAX aircraft are seen parked in an aerial photo at Boeing Field in Seattle, Washington

When the sources revealed the setback to ABC News, Boeing said it was unable to say whether a fix would take days or weeks.

Check this out  Man City rue the chance to sign Harry Maguire... as Aymeric Laporte injury continues to haunt them

A spokesman for the air manufacturer did not immediately respond when DailyMail.com reached out Friday.

American, United and Southwest airlines had to cancel flights for the holidays, including over Christmas and into the new year, because the FAA has not yet given safety approval to the MAX.

All three air carriers now say they do not plan to have MAX flights back on the schedule until June.

The first disaster happened in October 2018 in Indonesia, when a MAX flying as Lion Air flight JT 610 fell into the Java Sea 15 minutes after taking off from Jakarta.

All 189 aboard the plane died, including 180 Indonesians, one Italian and one Indian.

The second crash occurred in March when Ethiopian Airlines Flight ET 302, which also was a MAX jet, took off from Bole International Airport in the Ethiopian capital and crashed. 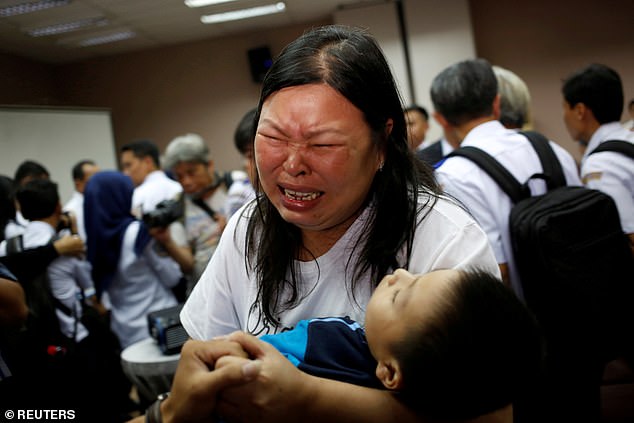 A woman, whose husband was on Lion Air flight JT610, cries as she holds their son after a news conference about the recovery process at a hotel in Jakarta, Indonesia, November 5 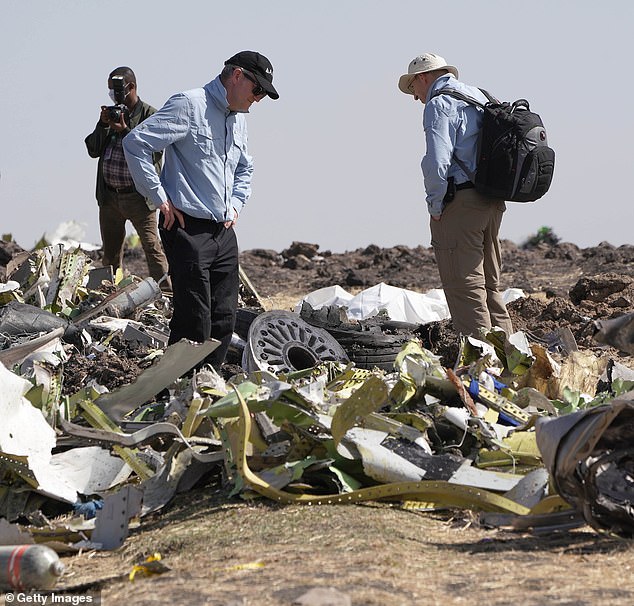 Investigators with the US National Transportation and Safety Board (NTSB) look over debris at the crash site of Ethiopian Airlines Flight ET 302 on March 12, 2019 in Bishoftu, Ethiopia

It was revealed earlier this month that Boeing also is reviewing a wiring issue that could potentially spark a short circuit on the MAX causing the aircraft to crash.

An internal audit in December ordered up by the US Federal Aviation Administration after the two fatal crashes found that two wiring bundles, if placed too closely together, could short circuit leading to tail control problems on the jetliner, and possibly lead to a crash if pilots don’t know how to respond correctly.

Boeing was looking at whether the short circuit would actually happen in flight, and if so, would need to separate the wiring on about 800 MAX jets that already have been built.

The latest news about the software issues puts the MAX’s return into even further uncertainty. 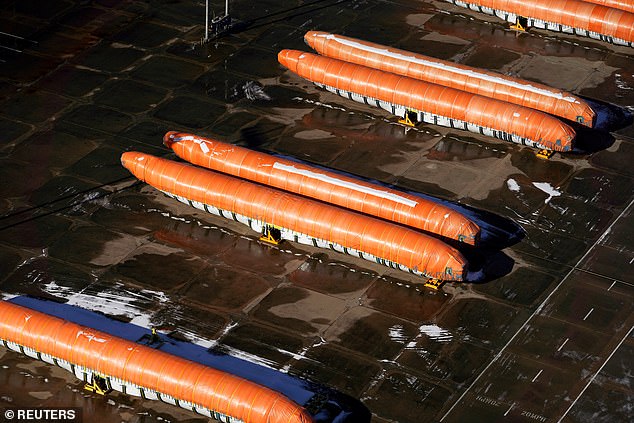 The latest news about the software issues puts the MAX’s return into even further uncertainty. Pictured: Airplane fuselages bound for Boeing’s 737 Max production facility sit in storage at their top supplier in Wichita, Kansas, in December 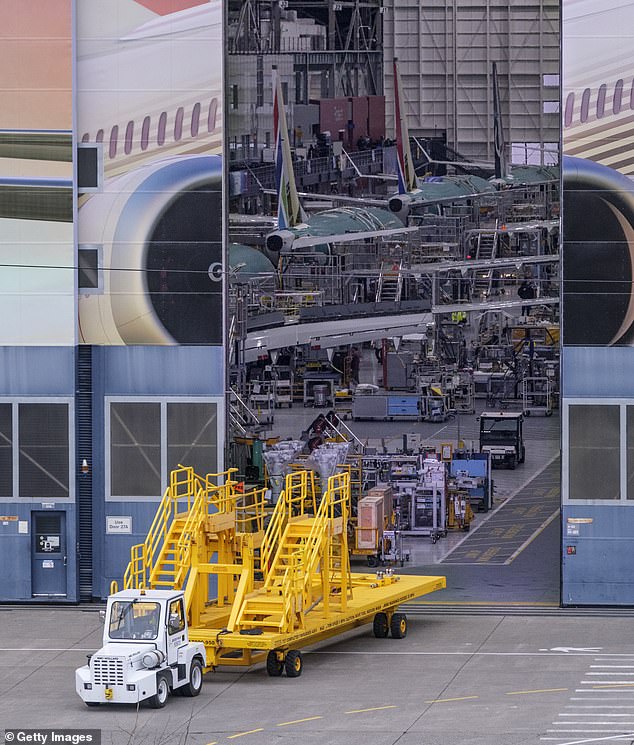 A 737 MAX production line inside the Boeing factory is pictured on December 16, 2019 in Renton, Washington, last December

The FAA will ultimately have the final say on when the MAX an fly again. The federal agency did not comment directly on the latest issue to arise on the problem-plagued plane, Bloomberg reports.

‘We are making necessary updates and working with the FAA on submission of this change, and keeping our customers and suppliers informed,’ Boeing said in a statement to ABC News.

‘Our highest priority is ensuring the 737 MAX is safe and meets all regulatory requirements before it returns to service.’

The MAX’s troubles are costing the aircraft manufacturer billions in losses.

Southwest said last month it reached a confidential compensation agreement with Boeing for a portion of a projected $830million hit to 2019 operating income arising from the grounding of its 737 MAX aircraft and said it would share with its employees proceeds of about $125million from Boeing.

The grounding is already having significant economic impacts. Boeing is halting production of the MAX this month and its biggest supplier, Spirit AeroSystems Holdings, said last week it plans to lay off more than 20 per cent of its workforce in Wichita, Kansas.