A number of Mac Miller fans took to Twitter Monday to express their frustration over the exclusion of the rapper from the 70th Primetime Emmy Awards Monday.

The show, which was held at the Microsoft Theater in Los Angeles, had a memorial segment which included tributes to the entertainers, writers and producers who had died in the year since last Emmys.

Tina Fey introduced the segment, which was set to a rendition of Franklin performing Amazing Grace: ‘Tonight, we celebrate the lives of some people who have been our very good friends … to work in TV is a privilege. We challenge your assumptions. We gently deliver bad news. We feel a responsibility to always tell you the truth.

Scroll below for video 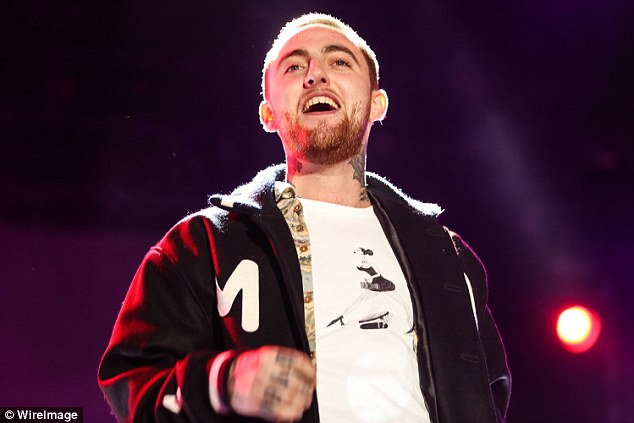 Gone but not forgotten: A number of Mac Miller fans took to Twitter Monday to express their frustration over the exclusion of the rapper from the 70th Primetime Emmy Awards Monday. The rapper was snapped in LA in 2014

Check this out  Doctor Who season 11: Everything we know about the new BBC series

‘It’s understandable to feel that when someone from our favorite show has passed away, we feel like we have lost a friend because we have.’

The segment also included a number of entertainment industry icons not primarily associated with their work on TV, such as singer Aretha Franklin, Playboy publisher Hugh Hefner and The Comedy Store owner Mitzi Shore. A tribute to late U.S. Senator John McCain was also included in the segment.

But Miller, who died earlier this month at the age of 26, was not featured in the emotional segment in the broadcast, leading many to take to social media to vent over the perceived snub.

Taking offense: Many fans vented via Twitter about the exclusion of Miller from the segment

‘#Emmys Mac Miller wasn’t worth mentioning? Wow. Hollywood is trash,’ one user wrote, while another said Emmys organizers ‘should be absolutely ashamed’ at the exclusion.

One user said she couldn’t ‘believe that Mac Miller was not included in the emmys memorium for people lost this year when many singers/songwriters were included.’ 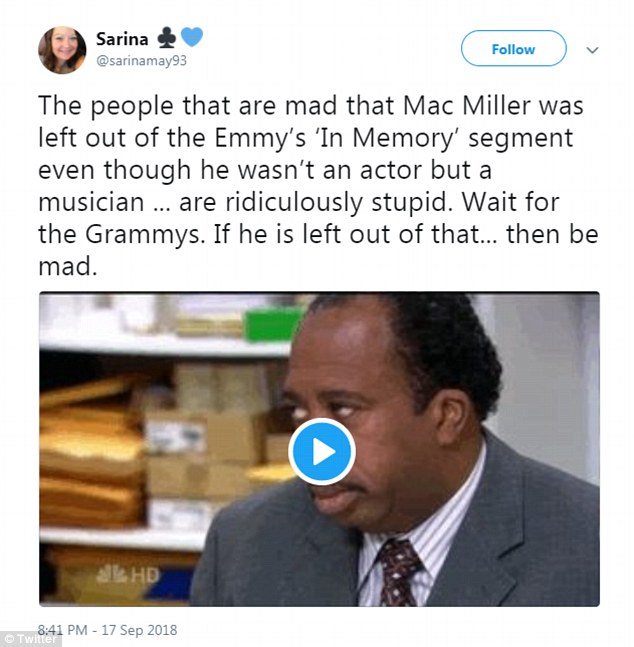 Issue: Some broached the notion that the Emmys wasn’t necessarily the proper venue for Miller to be remembered

Not everyone felt the Emmys was the proper venue for a memorial segment for the late Pittsburgh native, pointing out that he was best known for his musical career, aside from his 2013-2014 MTV reality show Mac Miller and the Most Dope Family.

‘The people that are mad that Mac Miller was left out of the Emmy’s “In Memory” segment even though he wasn’t an actor but a musician … are ridiculously stupid,’ one user wrote. ‘Wait for the Grammys. If he is left out of that… then be mad.’

Another wrote: ‘Mac Miller was a musician, not a TV person. He will be part of In Memorium on the next Grammys.’