A French submarine that went missing in the western Mediterranean in 1968 has been located during a search mission, officials said Monday, ending a 51-year wait for families of the deceased who continue to seek answers to the naval disaster.

The diesel and electric-powered Minerve submarine was lost off France’s southern coast with 52 sailors on board on January 17, 1968.

‘It’s a success, a relief and a technical feat,’ Defence Minister Florence Parly wrote on Twitter, after the wreck was discovered 45 kilometres (30 miles) off the southern French port of Toulon.

‘I am thinking of the families who have waited for this moment for so long,’ she said. 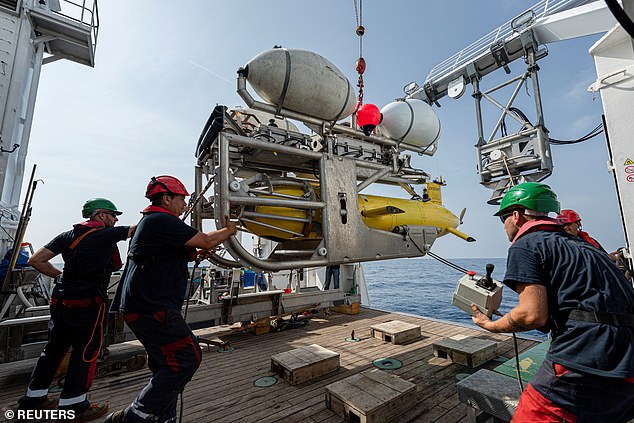 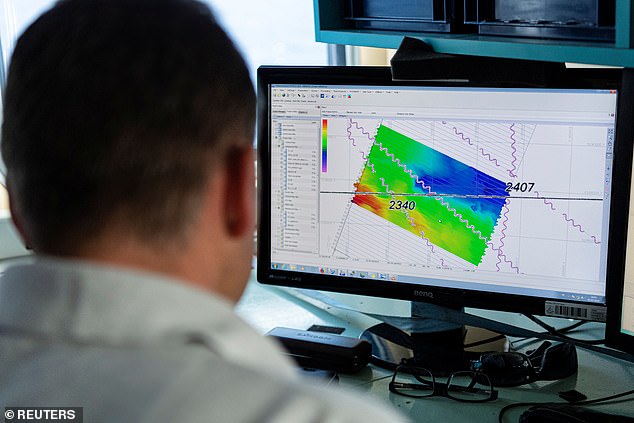 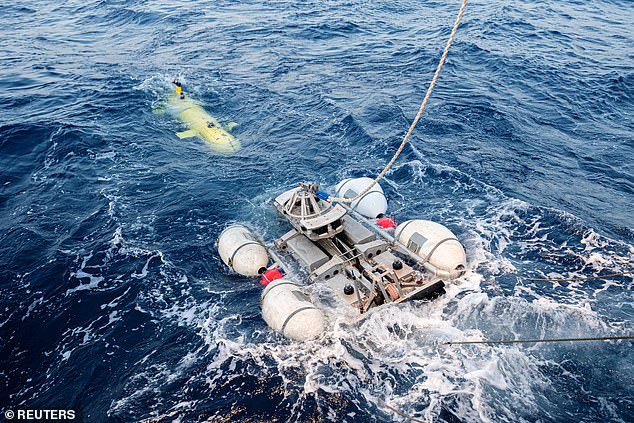 Minerve was found on Sunday by a boat belonging to private US company Ocean Infinity, which found the sub at a depth of 2,370 metres

At the start of the year, Parly announced a new search mission involving naval vessels and marine experts following fresh demands from families for an effort to find the final location of their loved ones.

‘It’s a relief, hugely emotional,’ the son of the Minerve’s captain, Herve Fauve, said after years of calling for the search mission. ‘These 52 sailors had been abandoned in some ways.’

Tides and currents in the western Mediterranean were modelled by the French team, as well as seismic data from the time that indicated the likely implosion of the vessel as it dropped to the seabed.

The discovery was ultimately made on Sunday by a boat belonging to private US company Ocean Infinity, which found the Minerve at a depth of 2,370 metres (7,800 feet), a senior French naval officer said.

The search vessel – the Seabed Constructor, which is equipped with underwater drones with powerful cameras – arrived on the scene last Tuesday, the officer said on condition of anonymity.

The Seabed Constructor was also successful in locating Argentina’s lost San Juan submarine in November 2018 which had disappeared in the Atlantic Ocean a year earlier.

The cause of the loss of the Minerve has never been confirmed, but the news that it has been discovered brought joy and relief to families. 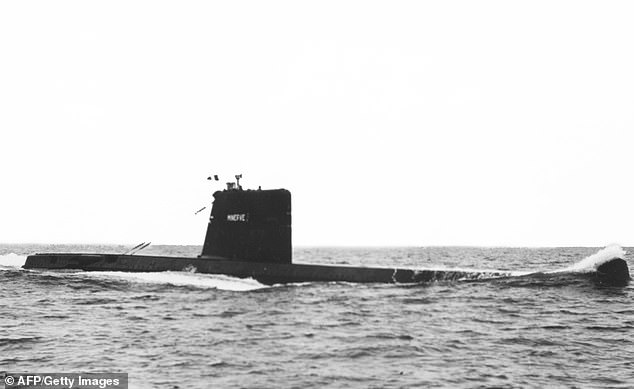 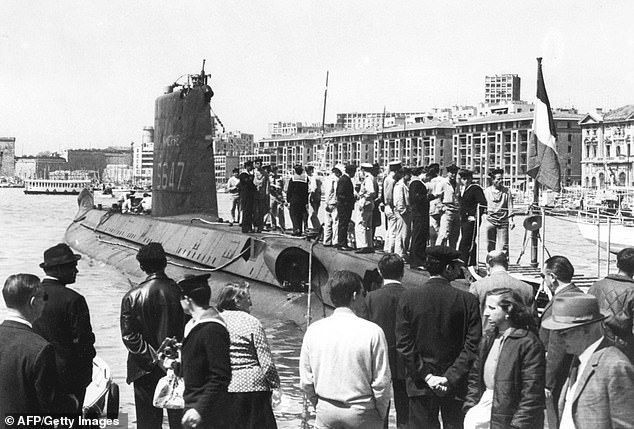 Minerve docked in the old port of Marseille, southern France with several of its crew members standing on deck 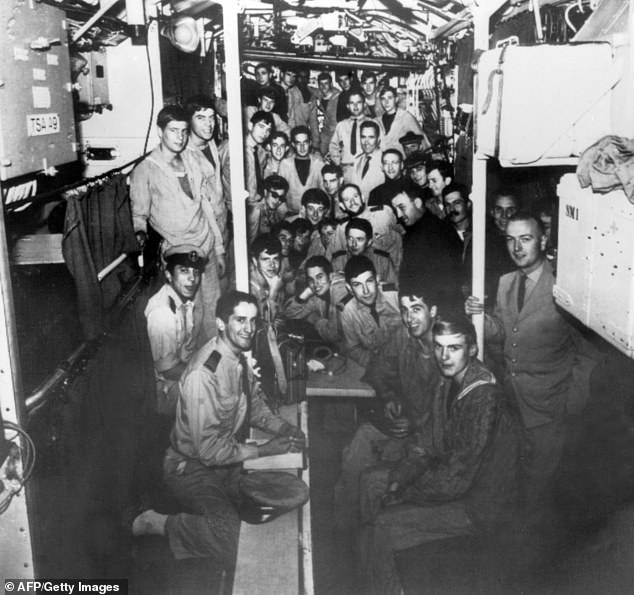 The crew of the Minerve pictured in 1965. A total of 52 sailors were on board when the sub disappeared

Check this out  Driver, 39, was 'showing off' in speeding car then killed 12-year-old girl

‘I can’t find the words to describe my emotion,’ the wife of one of the lost sailors, Therese Scheirmann-Descamps, said on Monday from her home in Toulon where she lives surrounded by black-and-white pictures of her husband Jules.

‘It’s extraordinarily soothing, for my children too. It’s such a surprise, such a joy,’ she added.

Fauve, who maintains a detailed website on the disaster, said there was unlikely to be any trace of the bodies.

Earlier this year, Jacques Dannay, who was just two when his father disappeared on board, said he was hoping the search mission would give him closure.

‘I know it’s stupid, but for me my father isn’t really dead for as long as we haven’t found the wreck,’ he said as the new search mission began. ‘If someone told me he was alive, I’d probably believe them.’

The Minerve was on a training mission in bad weather early on January 17 when it went down while returning to its base in Toulon, France’s main Mediterranean naval port. 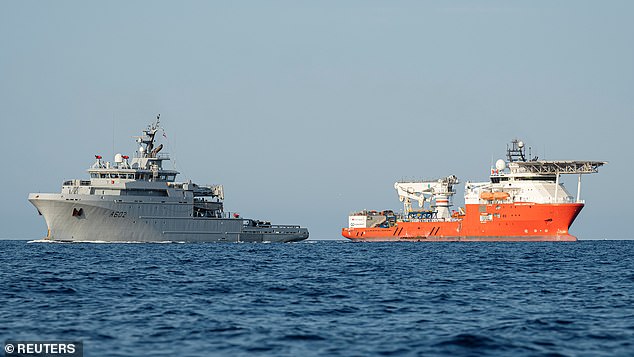 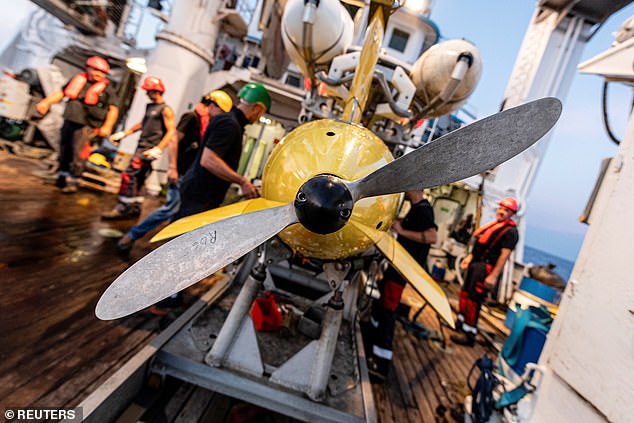 The disaster was believed to have been caused by a problem with the Minerve’s rudder, a collision with another boat, the explosion of a missile or torpedo, or a fault with its oxygen supply systems

Check this out  Electric scooters should be legal but restricted to 12mph, says travel boss

Experts have speculated that the disaster was caused by a problem with the Minerve’s rudder, a collision with another boat, the explosion of a missile or torpedo, or a fault with its oxygen supply systems.

France is a world leader in submarine technology and its modern-day fleet of nuclear-powered vessels are seen as a key part of its defence capabilities and independence.

The year 1968 saw the loss of four submarines around the world.

The USS Scorpion sank in the Atlantic, while the Soviet K-129 submarine armed with three nuclear missiles disappeared in the North Pacific.

The year was also marked by the disappearance of The Dakar, an Israeli vessel carrying out its maiden voyage with 69 men on board. It was only found off the Greek island of Crete in 1999.

Faure suggested the Minerve would not be recovered, but a ceremony would be held at sea above the spot where it lies.

‘To say our final goodbye,’ he said. 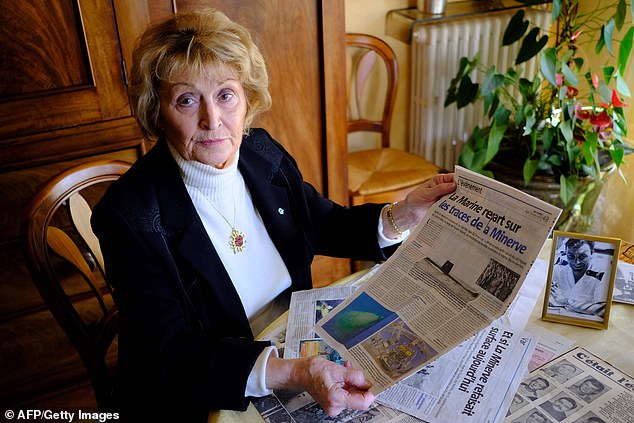