A furious homeowner launched an epic rant against Jeremy Corbyn after Labour Party activists turned up at his front door asking for his vote.

A group of five canvassers were filmed by the angry resident outside his front door, as he accused their leader of being a ‘terrorist supporter.’

The voter – who has not been identified – asked them if they were ’embarrassed’ to be out knocking doors on behalf of Labour ahead of next month’s general election.

He also accused the party of wanting to ‘bankrupt the country’ before the activists dismissed his claims as ‘lies’ then  mocked him by saying they would him down as a ‘maybe’ as they scuttled off.

It is not known exactly where the video was filmed or when the incident happened, but it emerged as support for Labour is collapsing across the country.

A new YouGov poll shows the Tories pulling ahead in almost every region of the UK, including many leave voting Labour heartlands, capping off a disastrous week for Corbyn.

It has followed the resignation of his deputy Tom Watson, a string of election candidates caught in controversy, and criticism over the party’s battle with anti-Semitism.

The footage circulating on WhatsApp today shows the resident opening his front door and pointing a camera at a male Labour activist wearing a red rosette and scarf.

The canvasser says: ‘Oh, hello, I’m calling from the Labour Party. It’s about the general election. Can I ask if you’ve given any thought…?’ 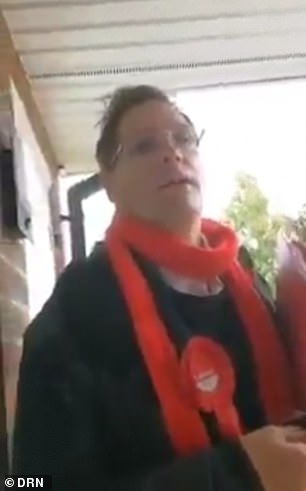 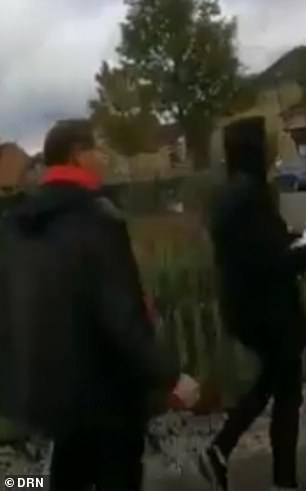 The footage circulating on WhatsApp today shows the resident opening his front door and pointing a camera at a male Labour activist wearing a red rosette and scarf. After he launches into his  rant, the group quickly leave

The resident quickly cuts him off, saying: ‘Right, can I ask you a question? Why would I support somebody who stands and shares a platform with people who are terrorists?’

Are you the homeowner, or do you know who he is?

The activist holds out his hand to stop him and says ‘okay’ before turning to leave.

But the voter rages: ‘No, don’t walk away because you’re now gonna stand there and tell me the answers.’

The activist waves away his concerns and says ‘that’s all lies’ before walking away.

Unsatisfied with his response, the resident follows him as he joins up with a group of fellow activists and he asks them: ‘Are you totally embarrassed? Well, come on. I wanna hear all of you. Don’t walk away. Just let’s hear what you’ve got to say.’

The first activist encourages his colleagues to leave and an elderly canvasser is left to debate the angry resident by himself, arguing: ‘This country needs a lot of investment.’ 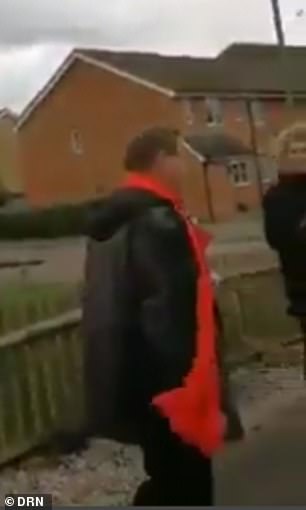 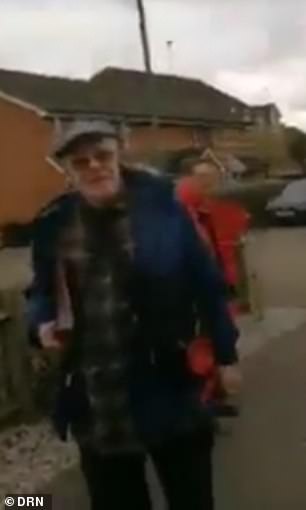 The first activist (left) encourages his colleagues to leave and an elderly canvasser (right) is left to debate the angry resident by himself, arguing: ‘This country needs a lot of investment.’

But he blasts back: ‘No, this country needs something other than Corbyn who’s a terrorist supporter lover and somebody like your chancellor who only wants to destroy this country.’

As the elderly man bends down to pick up some flyers he dropped, he is told: ‘Pick your bloody cards up and get away from here.’

Another activist sneers from afar: ‘I’ll put you down as a maybe, cheers.’

The man shouts back: ‘No I wouldn’t put me down as anything for you lot. You ignorant little swine. Get away.’

Check this out  Travel insurance is a minefield. Here's everything you need to get it right in

He then goes back inside his house as the activists shuffle off.

It is not known where the video was filmed or when the incident happened. 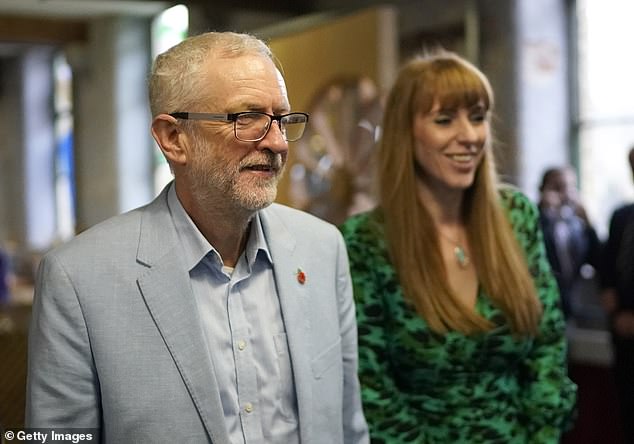 Jeremy Corbyn, pictured campaigning in Leeds today, left, could see heartland areas turning blue in next month’s election if the current polling proves correct. In the East and West Midlands, pictured top left and top right, support for the Labour Party has almost halved over the past two years

Jeremy Corbyn has faced criticism since becoming Labour leader over statements he made in the past seemingly supportive of terrorist groups.

At a meeting of the Stop the War Coalition in Parliament in 2009, Corbyn referred to invited members of Hezbollah and Hamas as ‘friends’.

Both Hezbollah and the military wing of Hamas are considered terrorist organisations by the Government.

A recent YouGov poll showed support for the Labour Party has fallen dramatically across the country, particularly in traditional Labour strongholds such as Wales and northern England.