The Morning Show hosts usually present themselves in a professional manner while interviewing high-profile celebrities, experts and socialites on the Seven program.

The TV hosts struggled to remain composed, laughing, cringing and raising their eyebrows as they attempted to end the act prematurely by interrupting Carole.

Is this moment The Morning Show officially died? Larry Emdur and Kylie Gillies look ed visibly uncomfortable on Tuesday as they struggled to contain laughter during a bizarre performance by world whistling champion Carole Anne Kaufman

Carole, 45, who markets herself as “The Whistling Diva”, appeared via video link from Los Angeles to whistle her rendition of Ed Sheeran’s Thinking Out Loud.

The American star was so engrossed in the whistling, she barely flinched when Larry made multiple announcements over her segment.

‘Fantastic! Oh hang on, here it goes’, Larry said 20 seconds before her one-minute act was concluded, as Kylie grit her teeth awkwardly and laughed.

The stars anticipated a near in sight, and looked uneasy with the camera being on them as they waited for Carole to wrap up. 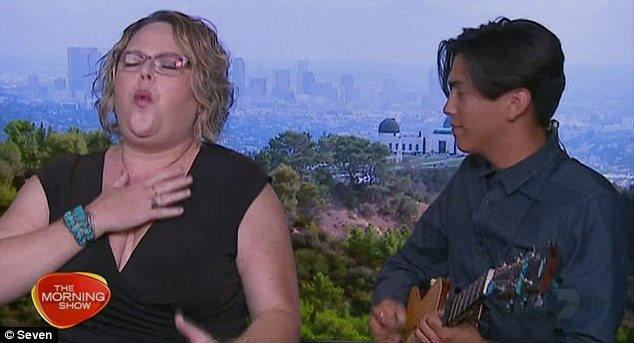 ‘Oh hang on, here it goes’: Larry appeared to make multiple attempts to end the act prematurely, by Carole pushed through with her Ed Sheeran rendition

Check this out  Tourists struggle through 4ft high water as Venice...

Larry later joked: ‘Our poor audio correction with his little needle- just going off the charts there!’

However, another awkward moment happened before her whistling even begun.

When asked about her technique, she proudly told Larry: ‘Thank you for noticing the length of my tongue. Yes, it is definitely an asset.’

‘Thank you for noticing the length of my tongue’: Using her mouth as an instrument, Carole also made another awkward moment when she proudly spoke of her ‘asset’ to hosts

Using her mouth as an instrument, Carole has travelled the world for competitions and conventions, and has even earned the title of International Whistling Entertainer of the Year in 2012.

Check this out  Andy Murray to retire this year

Carole also appeared on The Ellen DeGeneres Show more than eight years ago to showcase her talents.

She told the hosts: ‘What I love about whistling first and foremost is it is the world’s most portable instrument, you can practice everywhere and take your music anywhere you go.’ 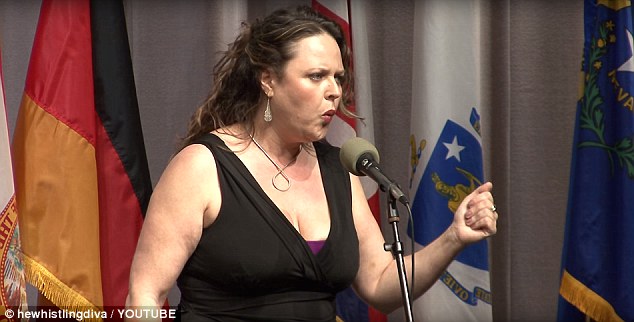 She’s a champion! Carole earned the title of International Whistling Entertainer of the Year in 2012 and has even appeared on The Ellen DeGeneres Show