A new mother has revealed she was terrified when a day after taking her baby home from hospital he stopped breathing and turned blue – but doctors were unable to diagnose him.

Emma Goodson, 37, who lives with her partner Andrew Goodson, 38, took matters into their own hands, diagnosing her son William, two, with a condition that was later confirmed as a very rare disorder that makes the sufferer seem unusually happy.

The panicked mother noticed that William would excessively laugh and had breathing difficulties.

‘His breathing sounded like Darth Vader,’ she explained. ‘He took no interest in his toys, but absolutely loved water and some plastics.’ 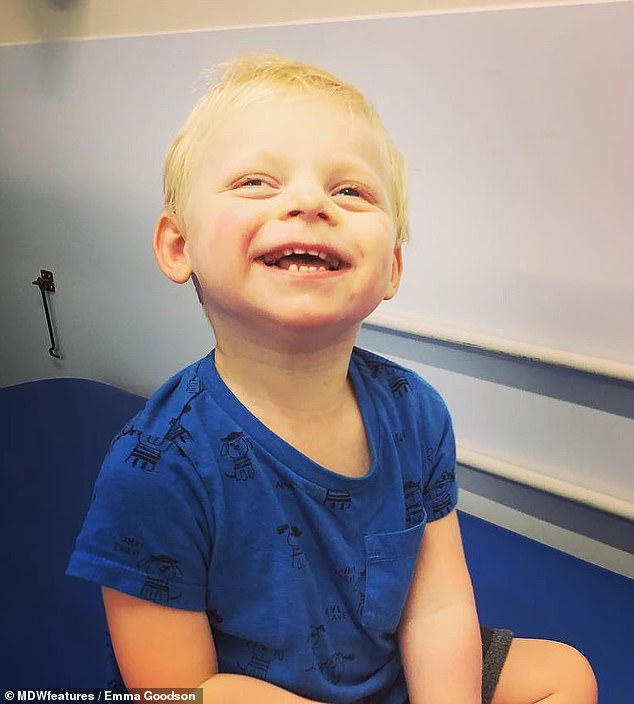 William Goodson, two, from Colchester, was diagnosed with Angelman disease after his mother Emma, 37, read about it online 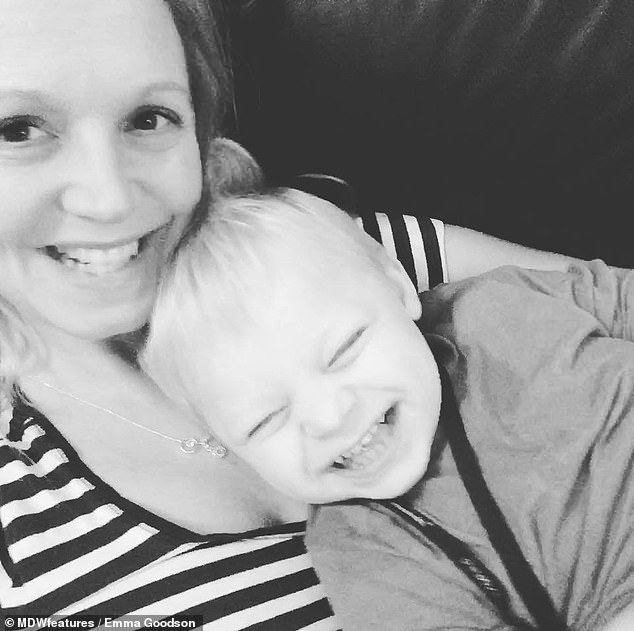 Little William, who would excessively laugh and had breathing difficulties, making him ‘sound like Darth Vader,’ was eventually diagnosed with the disorder. Pictured with his mother, Emma

After the youngster had a near four-hour-long seizure, Emma citied her own research of medical journals and demanded that her son was tested for a complex neurological condition called Angelman syndrome.

She said that doctors told her she was doing her son ‘a disservice’ but she ignored them and her diagnoses was eventually confirmed, allowing her family to treat William accordingly.

Emma and Andrew lost their first child in September 2015 due to a miscarriage so when she found out she was pregnant for the second time at Christmas 2016 she was elated.

Her second pregnancy was not without its difficulties as she was hospitalised in the first trimester with pneumonia, asthma and had several stays on the maternity ward due to bleeding, but she successfully gave birth to their son William on 26 August 2016. 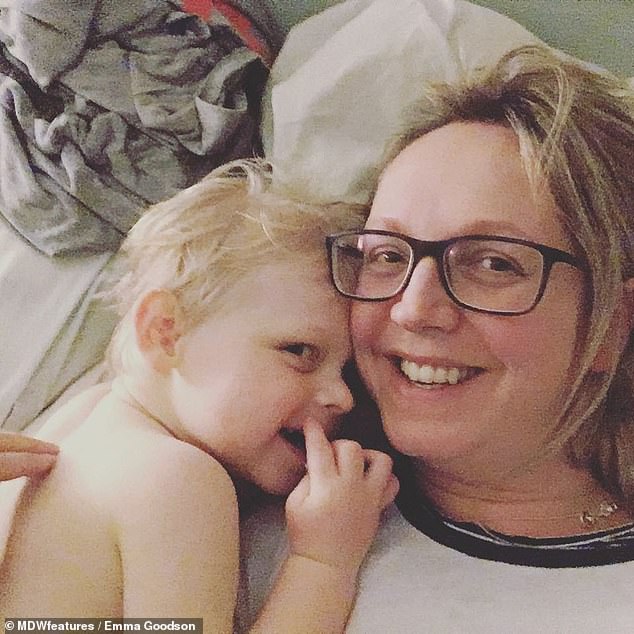 Emma, a nuclear engineer, and her partner Andrew Goodson, 38, from lost their first child in September 2015 due to a miscarriage and had William (pictured) the year after

Within just six hours of being born, William had problems breathing and was struggling to feed due to an unusually short frenulum – the strip that connects the underside of the tongue to the bottom of the mouth.

‘Because I’d lost my first child during pregnancy in September 2015, our second child was very much wanted,’ explained Emma.

‘Six hours after he was born, he presented with noisy breathing and weird breathing patterns which we were told was likely to do with the birth process.

‘Very quickly we noticed he struggled to eat due to having tongue tie which was cut at ten days old. Also, he wasn’t sleeping for 15 hours sometimes and was in pain all the time.’

William was admitted to Colchester General Hospital when he was just two-and-a -half-weeks-old. During his ten days there he was diagnosed with paronychia, which left the child unable to sleep.

‘He came home and a day later he stopped breathing and turned blue,’ she said. ‘That was our first ambulance trip. It was all quite the shock as you can imagine.’

Paronychia is an infection around the nails or in the urine which can also manifest itself as severe oral and rectal thrush or gastro-oesophageal reflux disease (GORD) – a disease that causes acid in the stomach to leak into the gullet.

It also causes laryngomalacia (a floppy larynx) and sleep apnoea.

It also causes laryngomalacia (a floppy larynx) and sleep apnoea

By three-months-old, William started to develop a squint, was still sleeping abnormally, had odd body movements and was unusually happy and laughing.

‘He could go 15 hours with no sleep. When he did sleep, I was petrified he’d stop breathing permanently because of his apnoea.’

On April 23, 2017 at seven-and-a-half-months-old, William went into a convulsive seizure which lasted for three-and-a-half-hours.

Emma could see him restless on the monitor so she brought him downstairs.

‘I had this sixth sense and we called an ambulance right away,’ she explained.

‘Seconds later he went into a seizure that would last for three and half hours.’

‘At the hospital he had an MRI, CT scan, EEG and lumber puncture and he didn’t even cry once.’

Emma was doing some of her own research when William was sent home for the weekend and came across a condition called Angelman syndrome – a complex neurological condition caused by the deletion of chromosome 15. 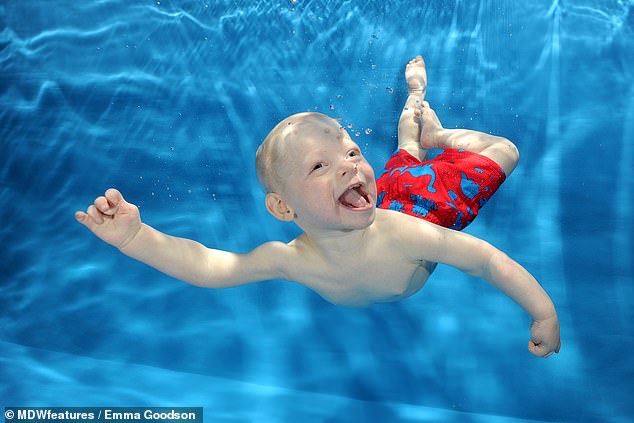 Angelman syndrome is a complex neurological condition caused by the deletion of chromosome 15 – and it causes, among other things, an unusual obsession with water. Pictured, William doing one of his favourite things – swimming 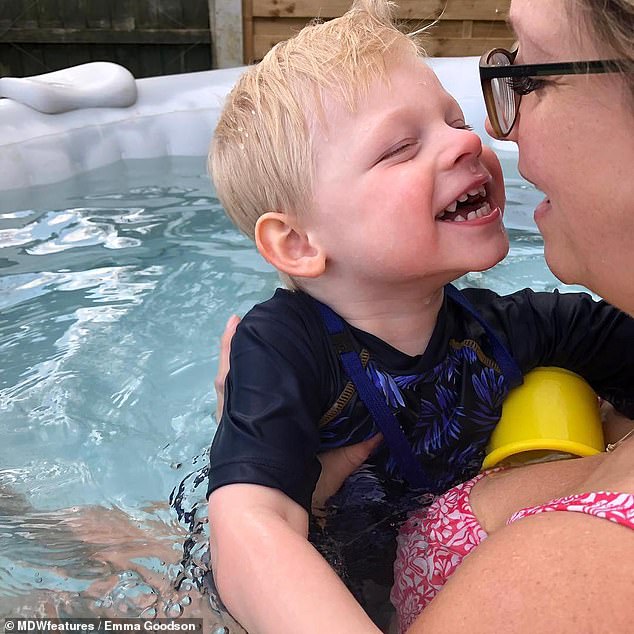 A day after a two-and-a-half-week-old William (pictured) was taken home for the first time he stopped breathing, his skin turned blue and he returned to the hospital

‘My blood ran cold, he ticked every single box right down to loving water and being unusually happy. At that point I knew our lives would change forever.’

What is Angelman syndrome?

Angelman syndrome is a genetic disorder that affects the nervous system and causes severe physical and intellectual disability.

A person with Angelman syndrome will have a near-normal life expectancy, but needs looking after for the rest of their life.

A child with Angelman syndrome will begin to show signs of delayed development at around 6-12 months, such as being unable to sit unsupported or make babbling noises.

Later, they may not speak at all or may only be able to say a few words. However, most children with Angelman syndrome will be able to communicate using gestures, signs or other systems.

The movement of a child with Angelman syndrome will also be affected. They may have difficulty walking because of problems with balance and co-ordination (ataxia). Their arms may tremble or move jerkily, and their legs may be stiffer than normal.

A number of distinctive behaviours are associated with Angelman syndrome. These include:

‘We were worried for a while as he didn’t laugh either, but then eventually the laughter came, and we were relieved.’

Emma took William back to the hospital and asked him to be checked for Angelman’s syndrome.

After being told she was doing her son a ‘disservice,’ he was tested for the condition and they finally got the diagnosis.

William has some challenging behaviour traits, he can’t walk yet, doesn’t sleep and can’t talk – but he still communicates with others.

He follows a ketogenic diet which means he no longer uses carbohydrates as an energy source but uses fat instead – which can cut seizure occurrences dramatically.

The family have gained a lot of support from charity organisations, family and friends.

‘He might never say “I love you” but he grabs our head, kisses us and looks at us with such love. We know that’s his way of saying it.’

‘William is a bubbly and cheeky child who is lovable and gives us the best cuddles and kisses ever. We love watching other people fall in love with him when they work with him. His giggle is infectious and he’s an outrageous flirt.’

‘We put him on a ketogenic diet in February 2019 which is a high fat low carb diet and has the potential to reduce the amount of seizures by as much as half.

‘We have received so much support from the children’s hospice and Angelman UK we can’t thank them enough.’

The family are keen to remind others that William’s diagnosis doesn’t define him.

‘I always tell families who are waiting for diagnosis, or just recently diagnosed, to remember that your child is not defined by their condition, so they are still the same child you loved yesterday,’ said Emma.

‘Ignore the text books, our children do so and we are continually surprised by them every single day. Non-verbal doesn’t mean unable to communicate. A look, a hug, a kiss all means ‘I love you’.

She added: ‘It’s a scary time and whatever you feel is valid, it’s OK to not be OK and it’s normal to grieve for the future you thought you and your family might have had.’ But let them surprise you, you’ll learn so much.’ 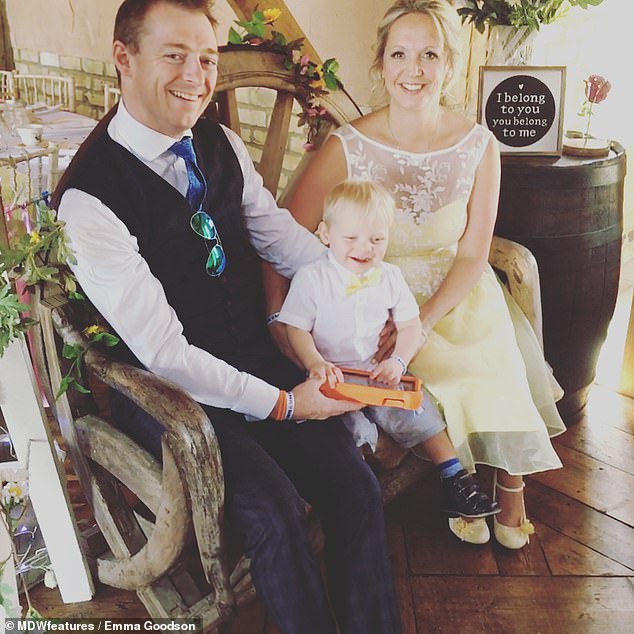 William’s mother requested he was checked for Angelman syndrome – a genetic disorder that affects the nervous system and causes severe physical and intellectual disability. Pictured with Emma and her partner Andrew 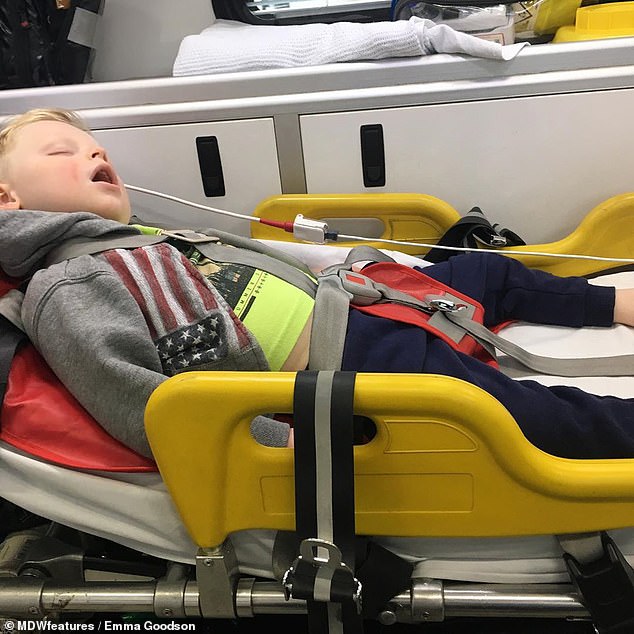