A mother whose teenager died after taking a prescription drug to get high is now working with schools to warn pupils of the dangers of abusing everyday medicines.

He suffered an accidental overdose of painkiller Tramadol, during recreational use of a prescription drug that’s thought to have been obtained over the dark web.

Tramadol is a prescription opioid, often dispensed against moderate to severe pain, usually after surgery or serious injury.

It can also be prescribed to treat long-standing pain, and is widely prescribed across the UK. 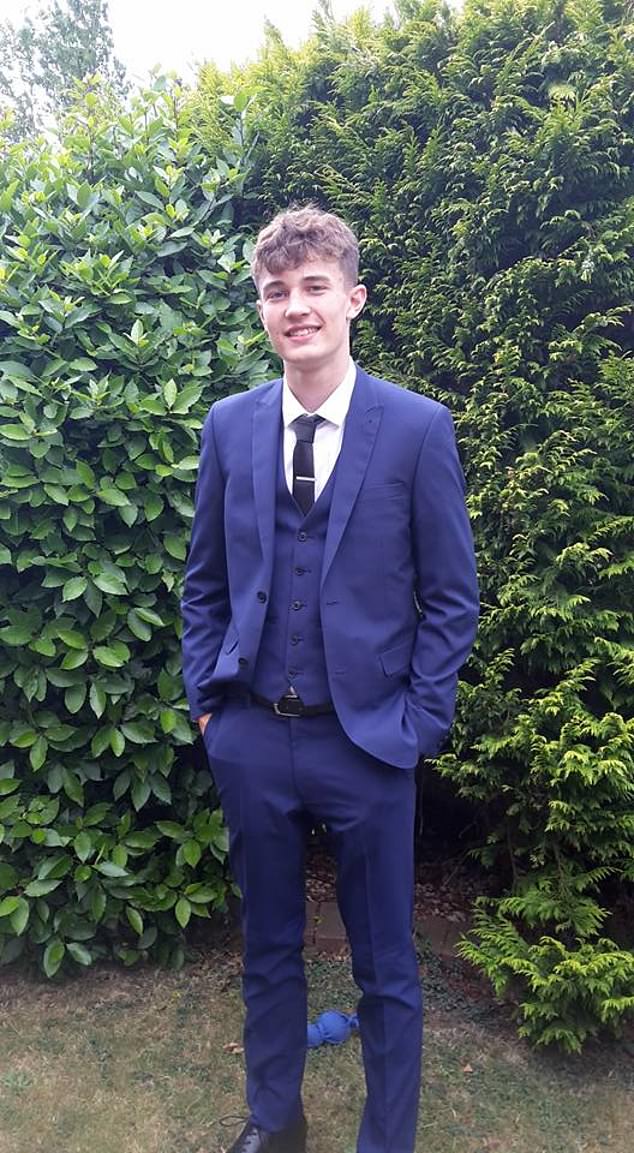 William Horley, 17, of Herne Bay, died of an accidental Tramadol overdose in July 2018. His mother Kim Webster explained how her sadly drew her to raise awareness against the prescription drug 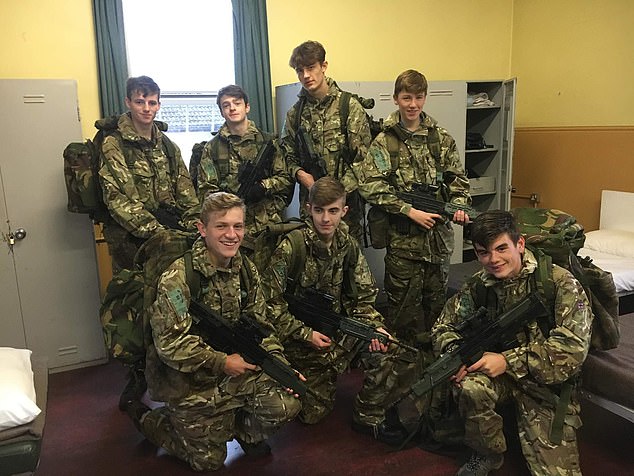 William, a normal teenage who had no known substance problem, had just been accepted into the army (William pictured in army gear, third from the left in the back) 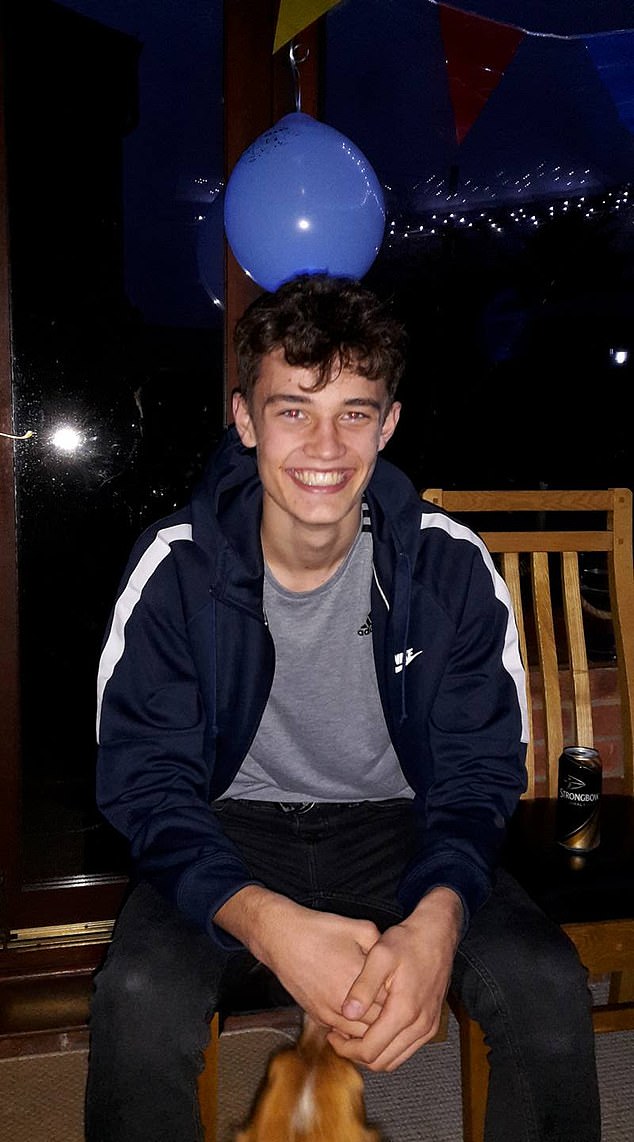 William was a hardworking teen, waiting tables at a restaurant 12 hours a day as his summer job, when he tragically passed away 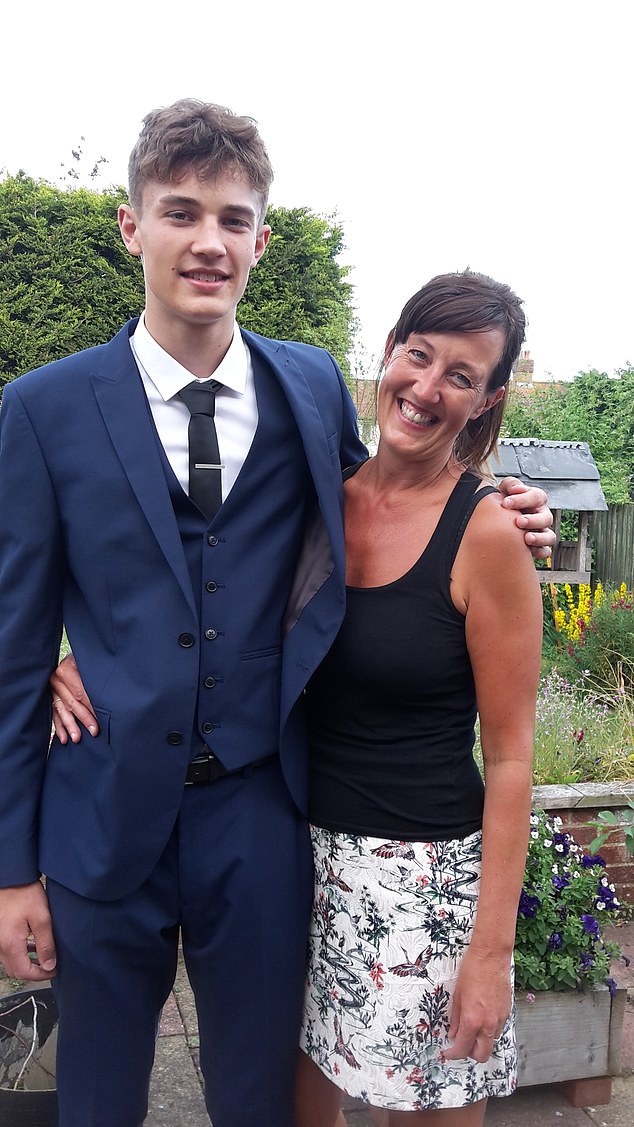 Kim, 48 (pictured right) was a dotting mother who trusted her son. She was heartbroken to hear he died from accidental substance abuse

Kim said: ‘Will was six feet six inches tall, a handsome, sports-mad lad who’d achieved his long term ambition and been accepted into the Royal Artillery. He was due to join the army just three months after he passed away.

‘Meantime, he had a job waiting tables in a restaurant.

‘Will was a sensible boy and we had talked about drugs. He always told me: “Mum, I’m not stupid. I’m going into the army which has a zero tolerance drugs policy.”

‘There was one occasion when I caught him smoking a joint. I gave him a real rollicking, even though I knew, what teenager these days hasn’t done that. But overall, I had no fears about my son getting involved with drugs, because I believed he’d never put his future in jeopardy.’ 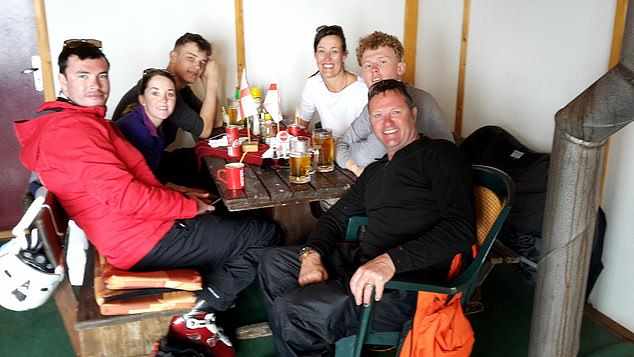 Will (left, at the back) with his family during a ski holiday. Kim said an inquest showed the day he died was the first time Will had taken Tramadol 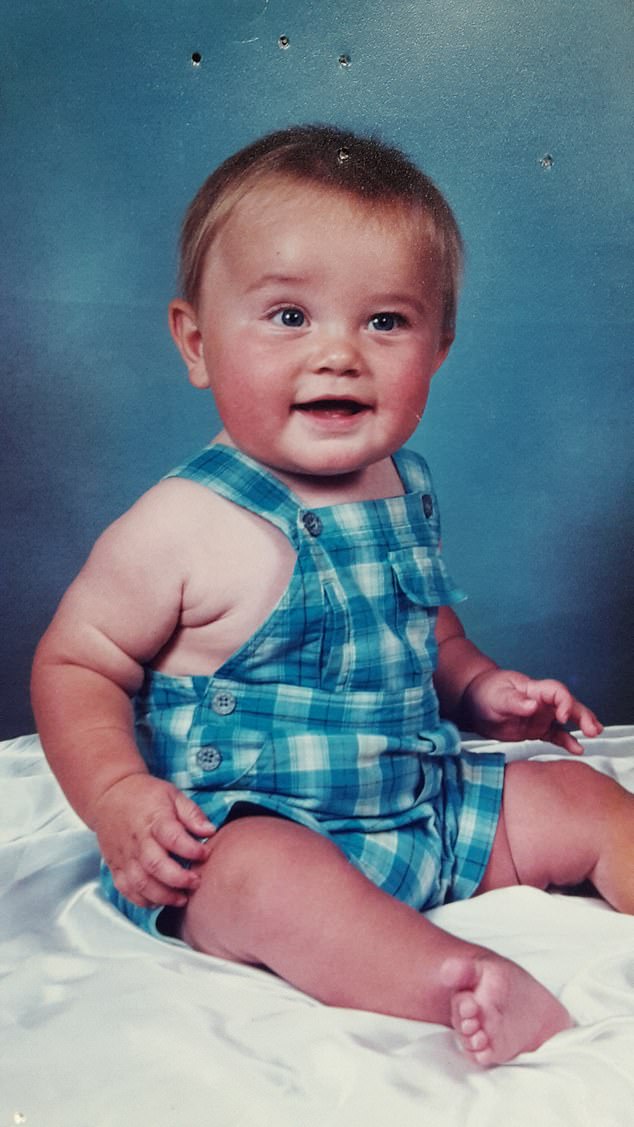 Will as a baby. Kim said her son was not a drug addict, but a teenager who made a bad decision and paid the ultimate price

The day Will died, he worked a 12-hour shift at his place of work, during the Whitstable Oyster Festival. Afterwards, Kim was due to pick him up, but instead he told her he was going to the beach with some mates to drink a few beers.

Tramadol prescription in the UK

Data from the Office of National Statistics revealed that 764 out of 1000 patients were prescribed the drug between 1 April and 30 June 2014, nationwide.

In June 2014, Tramadol became a Controlled Class C substance and placed in Schedule III to the Misuse of Drugs Regulations in a bid to reduce prescriptions.

Kim said: ‘I didn’t think anything of it. My last words to him were: “Have a good time and don’t be too late, the key’s under the mat.” I went to bed as usual.

‘Then at 5am next day, I woke with an uneasy feeling. I went to Will’s bedroom – he wasn’t there. That wasn’t typical for him. So I woke my family to tell them Will wasn’t home. They thought he’d probably crashed at a friend’s house.

‘But I had a nagging feeling something must be wrong.

‘Will wasn’t answering his mobile, so I tried calling his closest mates – it was still early, and none of them picked up.

‘Then I went out looking for him, driving round the streets. 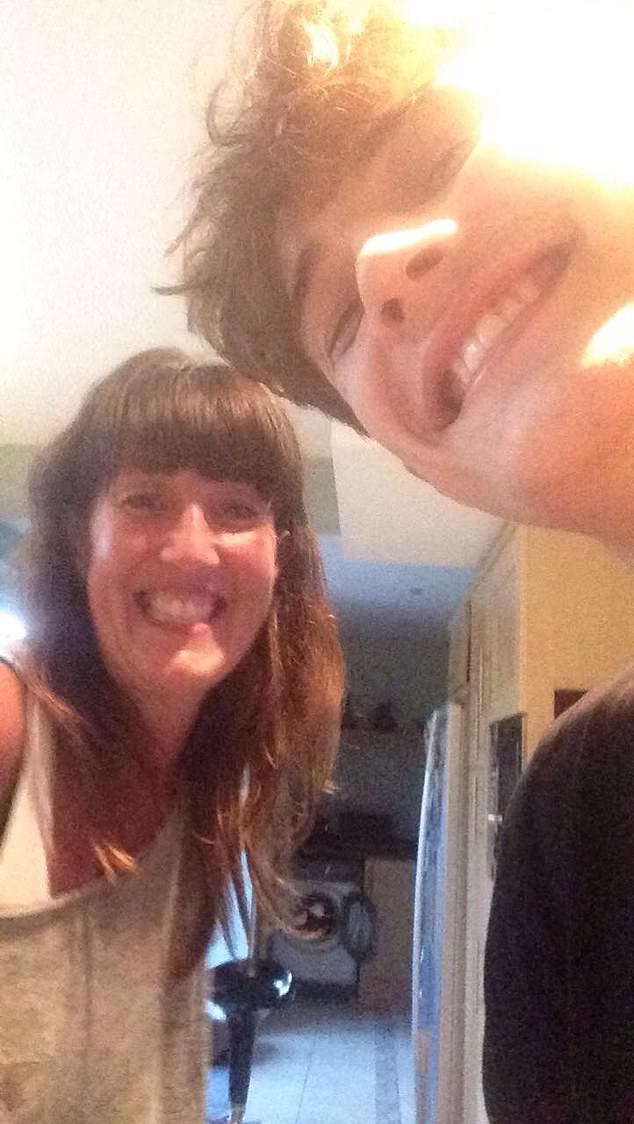 In February 2019, Kim traveled to Will’s school to warn against the dangers of taking prescription drugs for fun 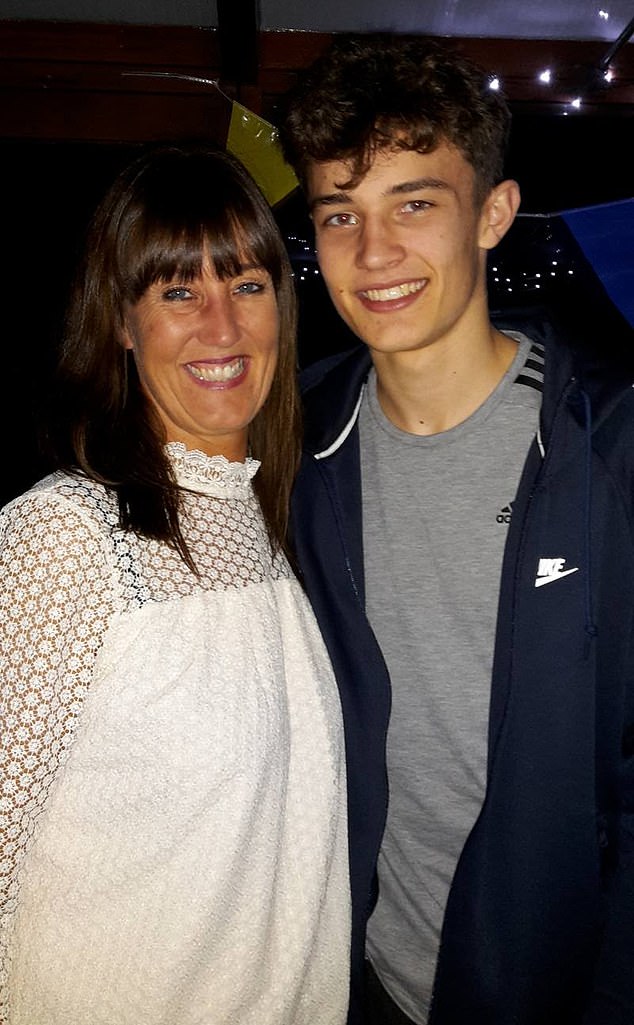 ‘A couple of hours later, I phoned the restaurant where he worked. The manager told me he hadn’t turned up for his shift, but there was a call from a friend who also worked there, reporting them both sick. I asked the manager to ring that friend and tell Will to contact me.

‘Shortly afterwards, the manager called back and said Will was on his way to hospital.

‘Hearing that, I thought perhaps he’d drunk too much. I had no inkling it might be anything to do with drugs.’

* According to UK website Addiction Helper, prescription drugs are the second most commonly abused drugs (after cannabis and volatile substances).

* Teenagers in particular will typically experiment with substances that are easy to get hold of.

* It’s estimated one in six teens have taken prescription medications purely in order to get high.

* Young people may take these drugs under the false assumption they are less dangerous or addictive.

* Many over-the-counter medications can be easily obtained from pharmacies, online and supermarkets. Family medicine cabinets can also be attractive to teenagers, as some will contain stronger prescription pills.

* Statistics show that the vast majority of teenagers who abuse prescription medications, obtain them from home and family members.

* Addiction Helper advises that parents talk to teens about the dangers of prescription medications, and keep such substances in a locked cabinet.

But by the time Kim arrived at the Queen Elizabeth the Queen Mother Hospital, Margate, she was told that Will had already passed away.

The heartbroken mother then had to identify her beloved son’s body.

An autopsy revealed that Will was killed by an overdose of the prescription drug, Tramadol, which one of his acquaintances is thought to have obtained over the internet’s dark web.

Kim says: ‘Will died because he did something that was out of character for him, when he took a prescription drug to get high. It was a naive teenager’s one-off lapse of judgement, but it cost my boy his life.’ 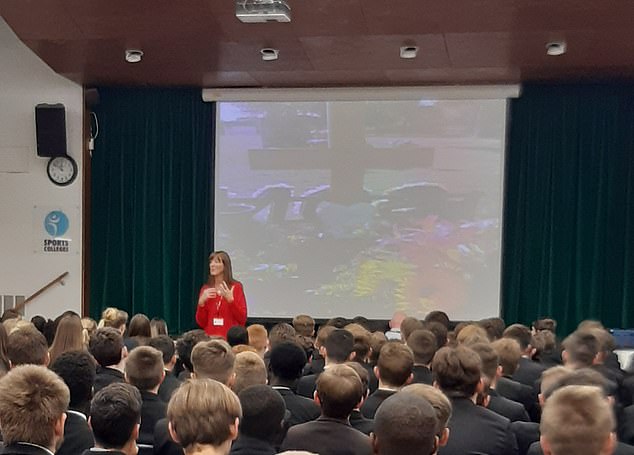 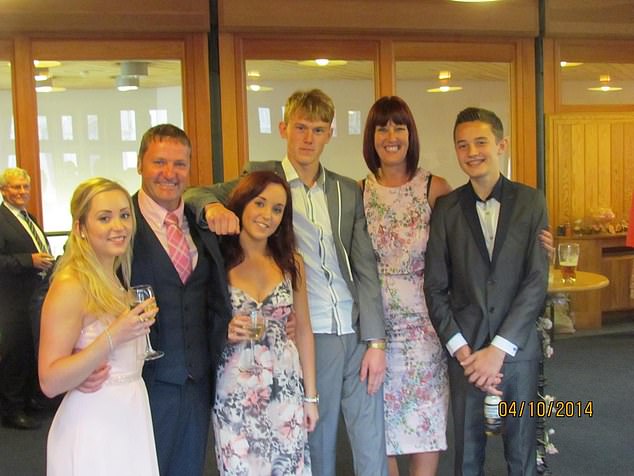 Pictured: Will and Kim’s family pictures in 2014. The family have now started their own charity, the Will Horley Foundation, to fund boxing lessons for children in need. She is married to Rob (left) 53, a builder. She has another son, Jack, aged 22, and twin stepdaughters, Hannah and Zoe 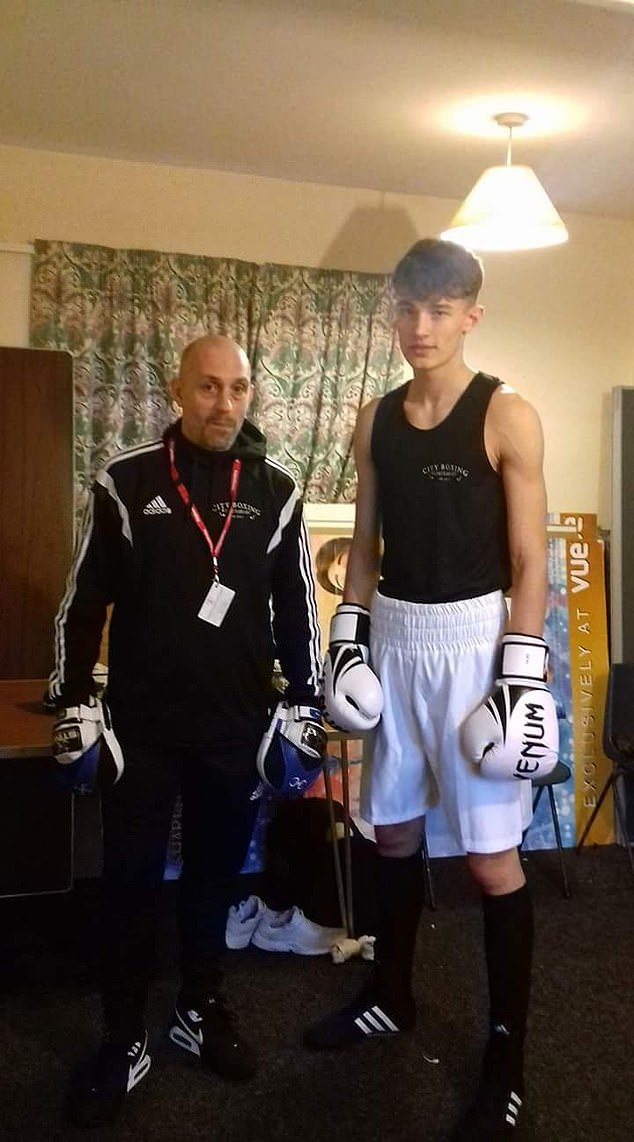 An inquest in January 2019 recorded a verdict of Tramadol overdose with pneumonia.

Will’s friend told the inquest that although he knew Will occasionally smoked weed in the past, this was the first time the teenager had taken Tramadol.

A Kent Police investigation into where the drug came from, is ongoing. One person has been arrested but nobody has yet been charged with any offence.

Kim says: ‘Will wasn’t a drug addict. This was an awful accident, a teenager out having fun his friends, making a momentary bad decision and paying the ultimate price. Such a terrible waste of a promising young life. 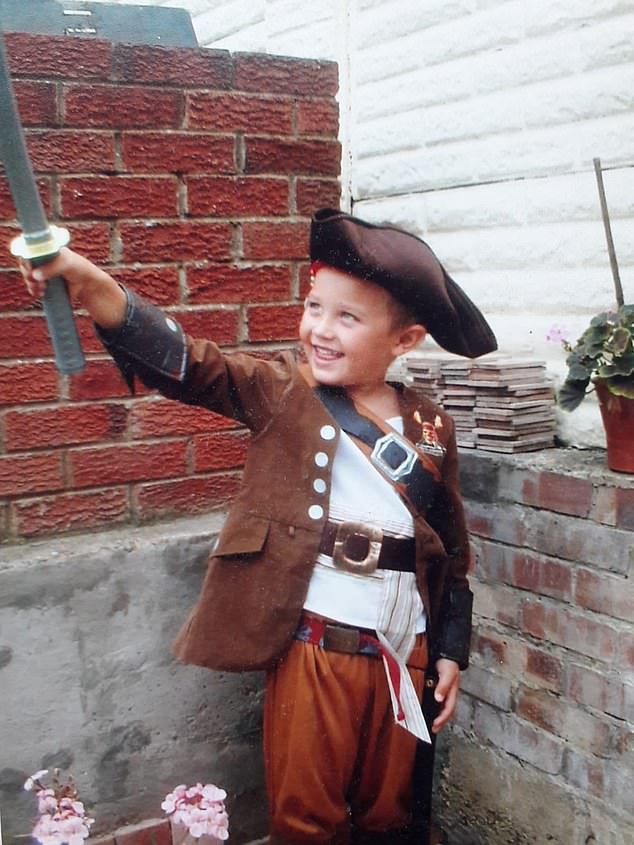 From childhood, Will had been an active and lively child who dreamed of joining the army (pictured at home in a pirate costume) 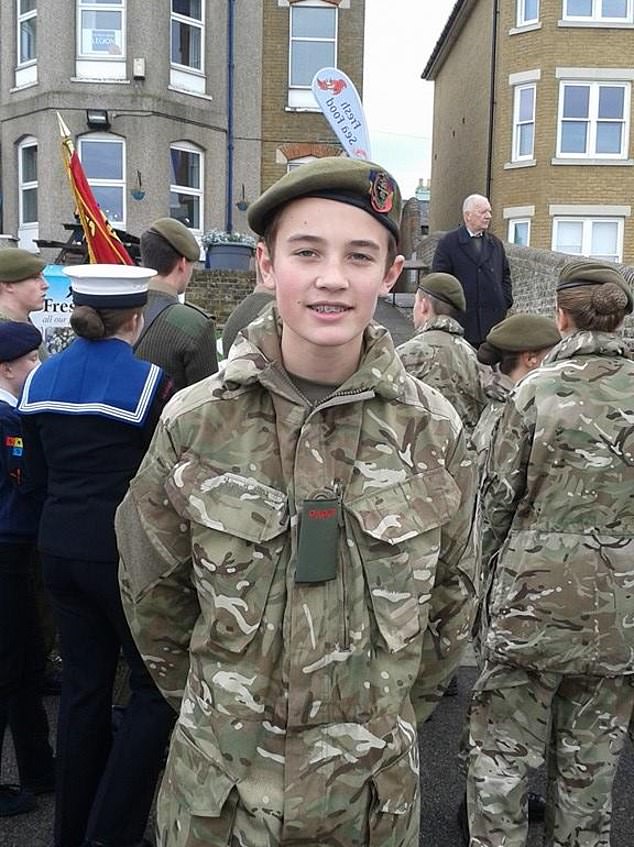 ‘Tramadol is a prescription drug and as a naive young person, my son would have assumed that made it safe. But of course it isn’t. Any drug is dangerous if it’s not prescribed and not taken in the correct dosage.’

In February 2019, Kim asked the head of Will’s old school, if she could speak to older pupils about the dangers of prescription drugs.

* Tramadol is a synthetic opioid, available since 1977, which does not occur in nature.

* The drug is a painkiller with a potency around 10 per cent that of morphine and it is usually prescribed by doctors to treat moderate to severe acute and chronic pain.

* Tramadol is among the prescription drugs that have been abused in sport. Users report that apart from alleviating pain, it induces slight euphoria and enables them to push their bodies harder than usual.

* While it’s considered to be less habit forming than other prescription opioids, users can still develop an addiction to Tramadol.

* Tramadol addiction has now spread to Asia, including China, and much of Africa. In Cameroon, for example, it is even fed to cattle to enable them to keep ploughing in the most extreme heat.

In June 2013, Tramadol became a Controlled Class C substance and placed in Schedule III to the Misuse of Drugs Regulations in a bid to reduce prescriptions.

She said: ‘I felt the need to warn other young people, that this could happen to any one of them. These drugs are so easy for teenagers to obtain. They don’t have to go out and locate a drug dealer.

‘They can find substances to abuse in the family medicine cabinet. Or they can order them over the internet from the privacy of their bedroom, then the postman will bring them right to their front door,’ she explained.

Since then, Kim has given regular talks in schools and colleges on the dangers of prescription drugs. 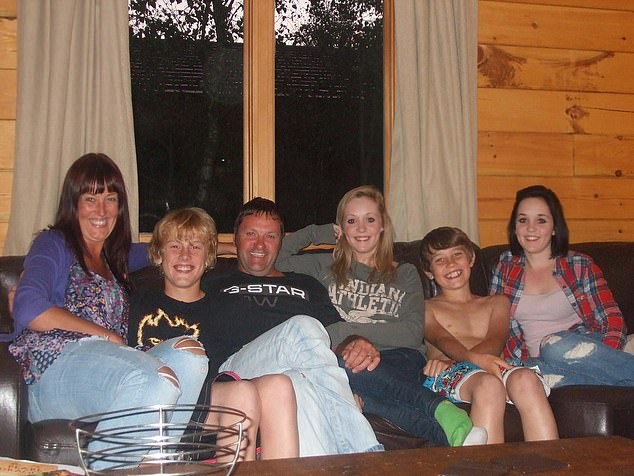 Kim, Jack, Rob, Hannah, Will and Zoe at home when Will was younger. Kim had to share the heartbreaking news of Will’s death with the rest of the close-knit family 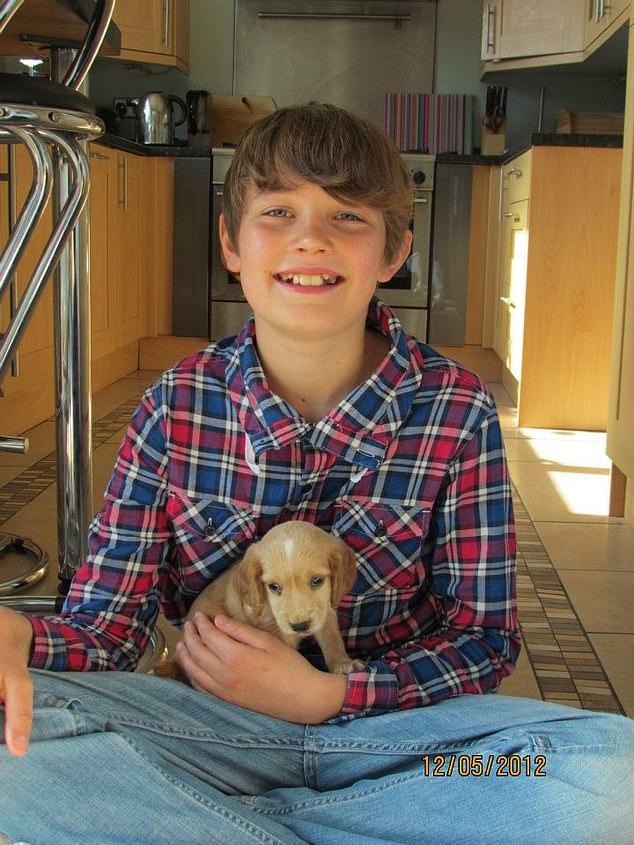 Will aged 12 in 2012 with the family’s puppy. Kim said she knew her son didn’t want his overdose to happen, nor did it want it to happen to other people

She said: ‘Young people think drugs like Tramadol and Xanax are safe because doctors can prescribe them. There are even adverts for prescription drugs popping up on social media, so the temptation’s constant.

‘But drugs on the dark web are often mixed with other chemicals, so nobody can be entirely sure what they’re taking.

‘I urged young people to remember, that if they take these drugs, even if they’re prepared to run that risk for themselves, to think about their family and what would happen to the people they love, if things go wrong.

‘I tell them how, as a mother, I had to identify my son’s body, break the news he was dead to his brother, father and grandparents, and decide whether his body should be buried or cremated.

‘No mum should ever have to do those things for their child.

‘What I have to tell these teenagers is the truth and it’s very powerful.’

She has now begun working with a Kent-based drug rehabilitation unit, the Kenward Trust, to raise awareness of the dangers of prescription drugs, as part of the trust’s Think Differently project.

She says: ‘It isn’t easy for me to go out and tell a roomful of strangers about how I lost my son. I’m still grieving for him – sometimes it feels as if my heart is being squeezed in my chest, to the point that I can’t catch my breath.

‘But I need to get his message out there.

‘Will had his life before him and was about to start living the dreams he’d held since a little boy. He didn’t want this to happen to him and wouldn’t want it to happen to others.’

Kim works as a project manager and is married to Rob, 53, a builder. She has another son, Jack, aged 22, and twin stepdaughters, Hannah and Zoe, aged 24.

The family has also a launched a charity, the Will Horley Foundation, in Will’s name to fund boxing for children in need.