Most marriages hit a few bumps. But 72-year-old Barbara Hamlin has weathered one of the most challenging upheavals.

Five years ago, her husband John had gender reassignment surgery to become Jane, now 71. Here, the couple from Somerset explain how they maintained their relationship…

A denim mini skirt, hotpants, a collection of women’s lacy lingerie and a pair of black patent stilettos. My head was spinning as I rummaged through the bag I’d found at the back of our wardrobe.

My immediate conclusion was that my husband of eight years was having an affair. Heart thumping, imagination running wild, I kept putting the clothes back in the bag, hiding the bag, then pulling it out again and staring at the clothes in disbelief. I was desperate to know the truth — but as we were due to fly to Canada on holiday the next day, I told myself to bide my time.

Once we were there, as we lay in the dark in bed together, I blurted: ‘So what’s this bag of women’s clothes I’ve found then?’ John replied sheepishly: ‘They were for me.’

To my astonishment, the ‘other woman’ was him. I was 49; John was 48. We’d been married for eight years. And yet, I’d never have imagined John could be into cross-dressing. 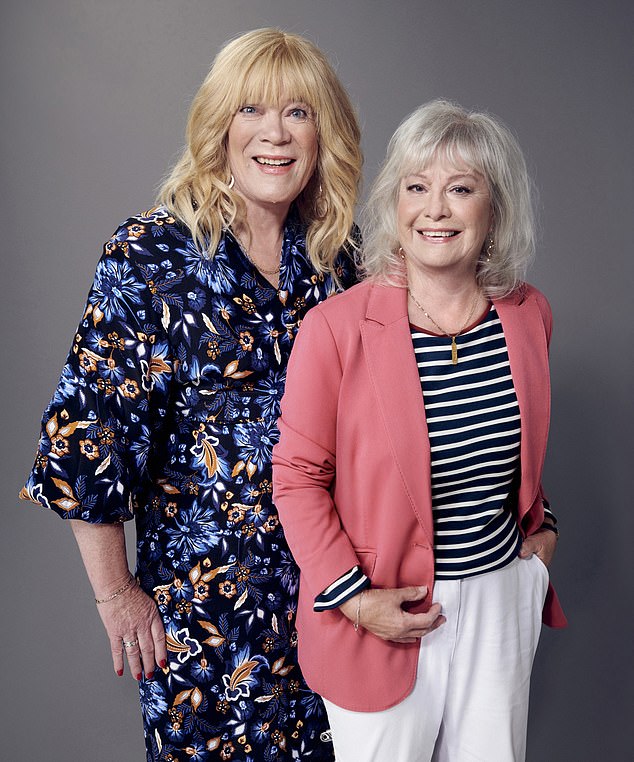 I’d been so afraid he was cheating that my overwhelming feeling was relief — not that I could have imagined then that it would eventually lead him to gender reassignment surgery.

Our married life was blissful before John’s revelation.

Both primary school teachers in Somerset, we had met at work, and got together after he split up with his wife, the mother of his son and daughter. Then 40, I had split from my own first husband two years before.

John and I never wanted a family of our own, because John already had children and I had never had a strong maternal instinct.

Looking back, the only possible clue to John’s future self was the fact that he always had clean, neatly manicured nails. He was happy to go shopping for clothes with me, but that never struck me as unusual.

As well as a physical attraction, we have always had a strong intellectual connection. Our meeting of minds and the fact that he hadn’t been unfaithful were the things I clung to after John’s news. I didn’t feel betrayed, just stunned. 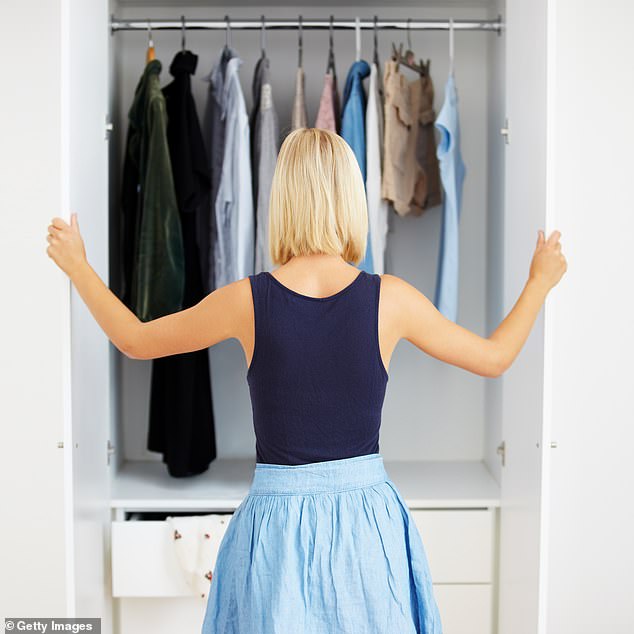 A denim mini skirt, hotpants, a collection of women’s lacy lingerie and a pair of black patent stilettos. My head was spinning as I rummaged through the bag I’d found at the back of our wardrobe (stock photo)

John told me he found it ‘relaxing’ to wear women’s clothing, and that he had first felt the urge at six years old. I tried my best to listen and understand.

I could see why he hadn’t felt able to tell me; if he had mentioned all this before we got together, I don’t think I would have pursued the relationship.

But as we lay in bed talking for hours, my reaction surprised even me. I wasn’t repelled by the idea.

I was more open-minded than I thought. Our love ran far deeper than our gender.

This might sound odd, but in a way it was exciting — secretly shopping for women’s clothing became something we could explore together. At my suggestion, we went shopping in Vancouver, with the shop staff assuming the beautiful gold blouse we bought was for me.

But back in the UK, reality hit. I told John I needed to tell my two closest female friends, which he understood. Luckily, when they saw I was OK with it, so were they.

To my surprise, he was actually quite attractive dressed as a woman. I think it was because he seemed so happy and was still the man I loved, underneath.

It was John I was in love with, however he looked.

We never discussed whether this meant John was attracted to men, too, and I never felt the need to ask. We were faithful to each other.

Over time, we began to look for opportunities where John could express himself as ‘Jane’ — the name he’d chosen for his alter ego. We went to a cross-dressing night in London and stayed in a hotel.

When the taxi driver politely asked, ‘Evening ladies, where would you like to go?’, it was so liberating for John.

Soon it became normal for him to change into his women’s clothes when he got home from work of an evening.

At first there was the mini-skirt phase. Thankfully, that didn’t last too long! It was around this time that I started to call John ‘Jane’.

Gradually, Jane started to wear more sober clothes, similar to my own, so she could pass as a woman.

We would poke our heads out of the front door to check the neighbours weren’t looking before driving to nearby cities to go shopping.

But, eventually, Jane came to feel that dressing as a woman part-time wasn’t enough. In 2011, she told me she wanted to start hormone treatment and make the transition to living as a woman full-time.

I was gripped with anxiety, and started to wake up feeling low. Until that point, I hadn’t lost my husband. Now I had to face the idea that the man I had married was really a woman.

But I knew that ultimately we’d stay together. I loved Jane, and she needed this in order to be truly herself, so there was no point in arguing.

By this time Jane was working as a university lecturer, and her employers were immensely supportive. Jane also received more than 100 emails of support from students.

However, I was dealing with heartbreaking feelings of loss, and started to see a counsellor.

It’s no surprise that, at this point, many such marriages fall apart. There are so many conflicting feelings. I can’t blame any woman who makes a different choice and decides to leave.

She had to live as a woman full-time for two years before having the operation, which involved full vaginoplasty [surgery to create a vagina, often by inverting the penis and removing the testicles].

On the morning of the operation in June 2014, after a four-hour drive to the Nuffield Health Hospital in Brighton, my main feeling was fear. I worried that the surgery could go wrong.

But it went to plan. Although so much had changed, I was instantly less anxious, and began to feel that I could move into a new phase of our life together.

I no longer worry about the looks we get — and Jane is so confident that she seems oblivious. I am so proud of her strength.

We are careful where we go, though, and wouldn’t go into town late at night.

We have had only one bad reaction, when the man behind the counter in our local butcher shop commented: ‘I see we’ve come in fancy dress today.’ Jane was so upset that we never went back.

Jane classes herself as a ‘lesbian trans woman’ — meaning she is still attracted to me, as I am to her. We’re still intimate as a married couple; we still kiss and cuddle.

I’m 72 and retired now, and the companionship is what’s most important, anyway. I’ve never missed lying next to a male physique, and I no longer think of Jane as John.

We still have our old photo albums, which she’s happy to keep, as it’s our history together, but when I look at them it feels like a completely different era.

Our story shows that with time and courage, marriage can survive anything.

After all, Jane and I are just ordinary people whose love transcends everything.

When I first came out, everyone told me: ‘You’re so brave!’ But it’s Barbara who is the courageous one.

I’d wanted to tell her for years, but was too scared to in case she left me. For as long as I can remember, I’ve felt I was born into the wrong gender. As a child, I used to secretly swap clothes with the girl next door out of childish curiosity.

When I told my mum I wanted to dress as a girl, she said: ‘Don’t be so stupid, you can’t.’

Going to an all-boys’ school was tough, as I knew any sign of femininity would be mocked. Inside I was in turmoil, trying to make sense of my feelings, because I knew I wasn’t gay — I didn’t fancy boys.

Check this out  PICTURED: Boy, 4, becomes a racing prodigy Mexico in Mexico as he competes with older kart drivers

I started secretly dressing as a girl aged 12. I’d wrap a towel around me as a skirt, or try on a tight vest top with two tennis balls inside. Then I’d catch sight of myself in the mirror and feel appalled. The moment of pleasure was so fleeting.

When Barbara found my bag of women’s clothes I felt a huge sense of relief. I had been secretly dressing up when she was out for the evening for years. In a way it made me feel comfortable, but it was also horrible knowing I couldn’t share it with Barbara.

Some women in her position feel betrayed by their husband — but somehow Barbara didn’t.

I didn’t feel guilty either, because it’s not my fault I’m transgender. That’s just how I was born. No one really understands why.

Barbara even taught me how to do my make-up. The first time she did it I looked in the mirror and thought: ‘Ah, it’s my mother!’ It felt great, though, as it was a sign of her acceptance.

But over time I felt a growing urge to make the full transition. It was hard switching between my two identities. I even had two different wardrobes — male for the outside world, then female clothing for holidays, special events and evenings at home.

Many transgender people are cut off by their families, so I was anxious about telling my grown-up children. My son and daughter were understandably shocked. I decided to also tell my ex-wife, as I knew they would need someone to talk to.

We had known each other since we were 18, but she told me, ‘That’s the most relaxed I have ever seen you.’

Later, as we sat and had a cup of tea with Barbara, my ex-wife said to her: ‘I couldn’t have coped with this!’ I’m so lucky to have Barbara.

Funnily enough, my grandchildren were the easiest to tell. Children are naturally accepting. They were a bit shy when they first saw me in Jane mode during a pub lunch, but Barbara brought out a card game as a distraction.

Suddenly the elephant in the room wasn’t there any more. I tried to get them to call me ‘Jane’, but of course they’d got used to calling me ‘Grandad’, so now I sign my cards to some of them as ‘Grandad Jane’.

My daughter has since told me that, growing up, she always felt I was searching for something, and now that made sense. For my birthday she gave me a beautiful blue floral scarf — it means the world to me, as it’s a symbol of her accepting who I really am.