The mysterious Tully monster is not likely to have been a vertebrate – despite its hard cartilage ridged back – scientists claim, after discovering unusual elements within its fossilised eyes.

Tullimonstrum, also known as the Tully monster, which lived 300 million years ago, has baffled scientists since fossils were first discovered 60 years ago.

A previous discovery in 2016 found Tully to have a stiffened rod of cartilage that supported its body and gills – suggesting that the creatures were predatory vertebrates, similar to some primitive fish. 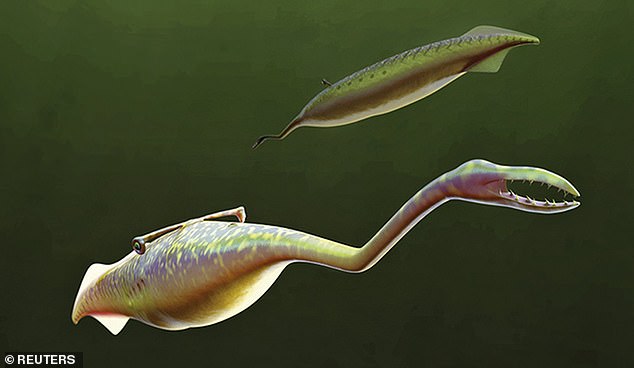 With a strange tube-shaped body, eyes on stalks and a long trunk like mouth, the Tully Monster (artist’s impression pictured) has baffled scientists for decades 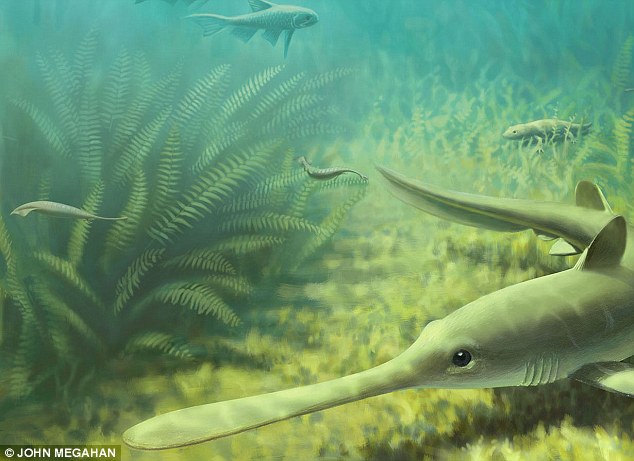 An illustration depicts what Mazon Creek may have looked like 300 million years ago, complete with Tully monsters (the two small swimming creatures), a large shark and a salamander relative. The new study claims that the identity of the monsters is still up in the air

But now researchers at the University College Cork believe this was not the case after studying chemicals present in the eyes of the animal.

WHAT WAS THE TULLY MONSTER?

Tullimonstrum was first discovered in the 1950s by fossil collector named Francis Tully when the first fossils were found in Mazon Creek fossil beds in central Illinois.

The Tully Monster, or Tullimonstrum gregarium, is thought to have been a soft-bodied sea creature that lived in muddy coastal waters in what is now Illinois.

They would have grown to be around one foot long (10cm) with a slender segmented body.

Its eyes sat at each end of a long rigid bar across the top of its head and it had a caudal fin.

Most strangely it had jaws at the end of a long proboscis, suggesting it perhaps ate food hidden deep in the silt of the estuary or within rocky nooks and crannies.

Inside its body it had a stiff rod of cartilage, known as a notochord, which helped to give it structure.

Using a particle accelerator to determine the ratios of elements present in  in modern day vertebrates and invertebrates’ eyes they were able to draw comparison with the ancient Tullimonstrum.

They discovered a ratio of zinc to copper in the melanosomes of the eyes were more similar to that of modern day invertebrates than that of vertebrates.

By bombarding specimens with bursts of radiation the scientists were able to ‘excite’ elements within – in this state each element releases a signature X-ray allowing them to work out which elements make up the eyes.

Dr Chris Rogers Postdoctoral Researcher in Palaeobiology, University College Cork who led the study wrote in The Conversation: ‘The chemistry of Tully’s eyes and the ratio of zinc to copper was more similar to that of invertebrates than vertebrates.

‘This suggests the animal may not have been a vertebrate, contradicting previous efforts to classify it.’

The research team also found that the fossil’s eyes contained a different type of copper than that of the modern day invertebrates they studied – leaving them unable to classify it as either. 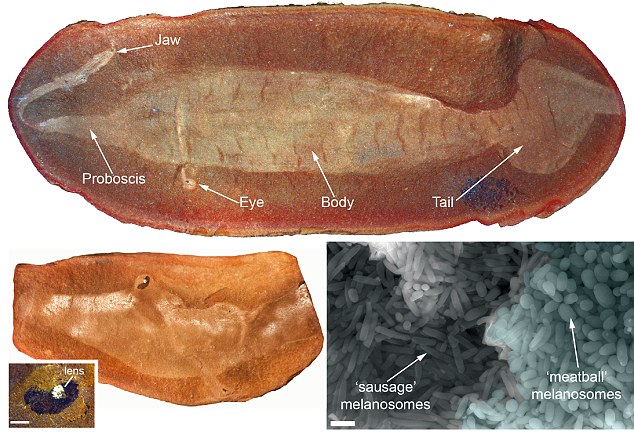 Scientists previously believed the the Tully Monster (fossils shown above) must have been a vertebrate, because of pigments they discovered in its eyes. The melanosome pigments were found in both spherical and elongated forms, or sausages and meatballs  (pictured bottom right), which are only found in vertebrates. This has since been disputed

A vertebrate is an animal with a back bone or cartilage covered spinal cord.

The term stems from the word vertebrae, the bones that make up the spine.

Animals that do not have backbones or cartilage covered spinal cords are called invertebrates.

Dr Rogers added: ‘While our work adds weight to the idea that Tully is not a vertebrate, it doesn’t clearly identify it as an invertebrate either.

‘Where do we go from here? A broader analysis of the chemistry of melanosomes and other pigments in the eyes of a wider range of invertebrates would be a good next step. This may help to further narrow down the group of animals to which Tully belongs.’

A particle accelerator used, called a synchrotron radiation lightsource, is located at Stanford University in California where the research took place.

The research: Synchrotron X-ray absorption spectroscopy of melanosomes in vertebrates and cephalopods: implications for the affinity of Tullimonstrum by Christopher S. Rogers , Timothy I. Astrop , Samuel M. Webb , Shosuke Ito , Kazumasa Wakamatsu and Maria E. McNamara, was published by The Royal Society.

The Tully Monster (artist’s impression) had eyes on either end of a stiff bar that sat across the top of its head while its jaws were at the end of a long proboscis. New research claims that two papers that classified the animal as a vertebrate fish in 2016 were wrong

THE TULLY MONSTER AND ITS BACKBONE

In 2016 experts said the Tully Monster was likely a predatory vertebrate related to lamprays.

Paleontologists at Yale University showed the creature had a stiffened rod of cartilage that supported its body and gills. This means it was a predatory vertebrate, similar to primitive fish. 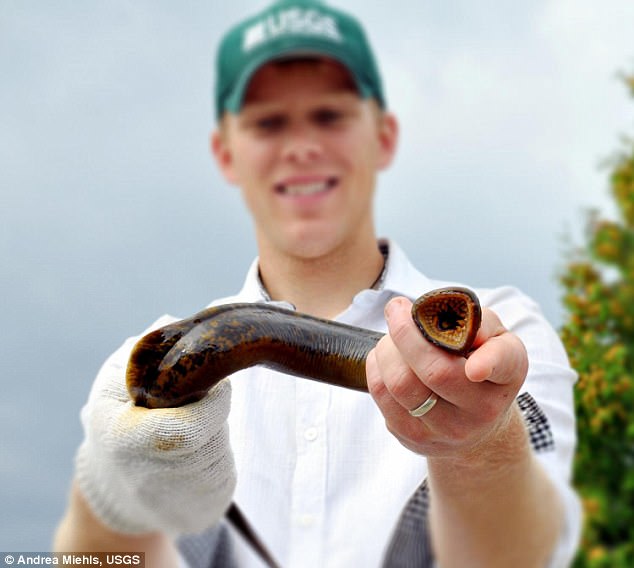 US Geological Survey sea lamprey expert Dr Nick Johnson demonstrating the ridge of tissue, called a rope, along the back of a mature male sea lamprey

Victoria McCoy, a palaeontologist who conducted the research at Yale Univesity, now based at the University Leicester, analysed the morphology and preservation of the animal.

Using powerful analytical techniques, such as synchrotron elemental mapping, which illuminates the physical features by mapping the chemistry of the fossil, she was able to unravel its features.

Her team discovered the animal had a rudimentary spinal cord, known as a notochord, and gills, which had not been previously identified in the fossils.