‘I’ve given enough ground’: Nigel Farage dismisses ‘comical’ Tory pleas for the Brexit Party to stand aside in MORE seats – as he says Boris Johnson should now make way in Labour Leave heartlands

Mr Farage said he had already ‘gifted’ the PM at least ‘two dozen’ constituencies by dramatically withdrawing his would-be MPs in areas held by the Conservatives.

He insisted Boris Johnson should be the one to make the next concession, as there were a number of Leave-leaning Labour strongholds where only the Brexit Party had a chance of winning.

‘I’ve given more ground than anyone you have ever spoken to before,’ he told ITV’s Good Morning Britain.

However, the MEP did stop short of completely ruling out any extension of his ‘election amnesty’.

The dynamics of the election battle were thrown up in the air yesterday when Mr Farage announced that the Brexit Party will not contest 317 seats won by the Tories in 2017.

The decision came after Mr Johnson made a public pledge that the Brexit transition period will not be extended beyond the end of 2020 – and that he would negotiate a Canada-style free trade deal with the EU. 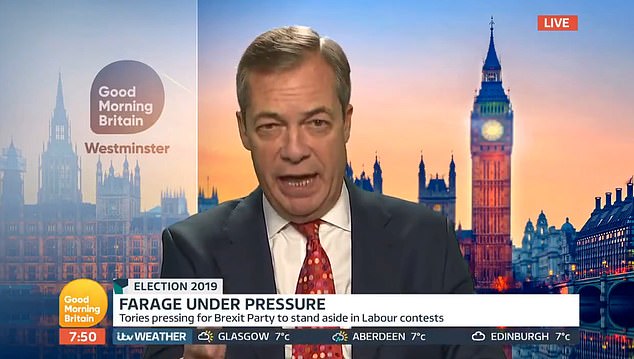 In a round of broadcast interviews this morning, Nigel Farage said the calls on him to make more concessions were ‘almost comical’ 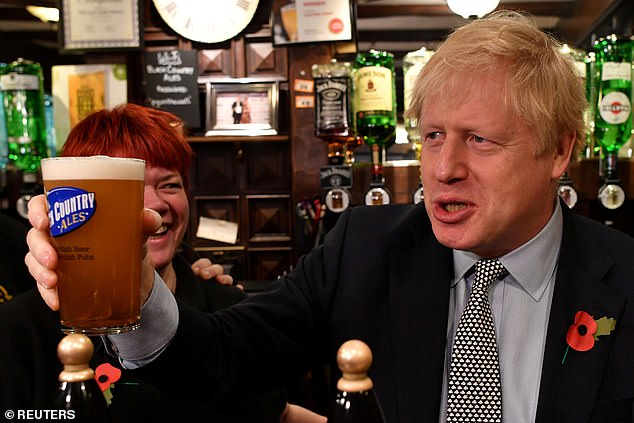 Mr Farage insisted Boris Johnson (pictured on the campaign trail yesterday) should be the one to make the next concession, as there were a number of Leave-leaning Labour strongholds where only the Brexit Party had a chance of winning

The Brexit Party leader has insisted the ‘difficult decision’ to stand candidates down, amid fears it could lead to a hung parliament and a second referendum, had put the country ‘on the best possible course for future success’.

The PM welcomed the shift, saying it amounted to recognition that only the Conservatives could ‘get Brexit done’.

But senior Tories immediately urged Mr Farage to go further – pointing out that Mr Johnson’s chances of a outright majority hinge on winning Labour-held seats such as Peterborough and Bolsover.

In a round of broadcast interviews this morning, Mr Farage said the calls on him to make more concessions were ‘almost comical’.

Writing in The Telegraph, Mr Farage said he saw ‘a chink of light’ when he viewed the video posted on Twitter by Boris Johnson at the weekend.

Mr Johnson said he would not extend the planned transition period beyond the end of 2020 and that he would seek a ‘super-Canada-plus’ style free trade agreement with the EU.

Writing in The Telegraph, Mr Farage said: ‘Now, The Brexit Party will focus its energies on fighting every seat held by Labour, which has betrayed more than five million of its voters, and all the Remainer parties.

‘If we can win some of these seats, our presence in parliament will keep Boris Johnson honest and help to deliver Brexit.

‘I have no great love for the Tories, but I can see that by giving Johnson half a chance we will prevent a second referendum. To me, that is the single most important thing for Britain. No matter how it is achieved.’

But Liberal Democrat Brexit spokesman Tom Brake, responding to the reports that the pro-Brexit European Research Group held talks with the Brexit Party over Mr Farage’s decision to stand down candidates, said: ‘These talks show that Nigel Farage is pulling the strings behind the scenes. He is the puppet master in Boris Johnson’s Brexit horror show. 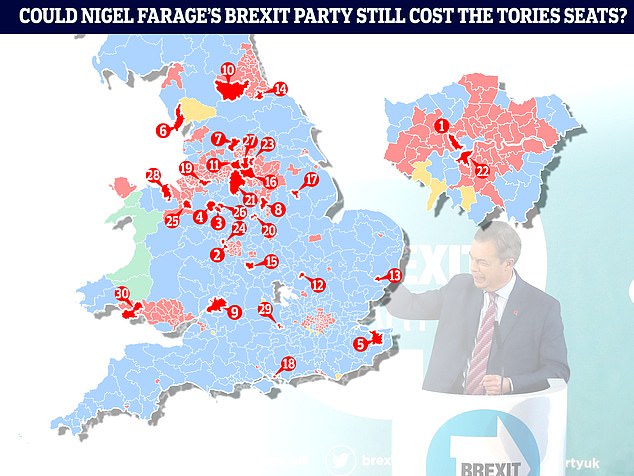 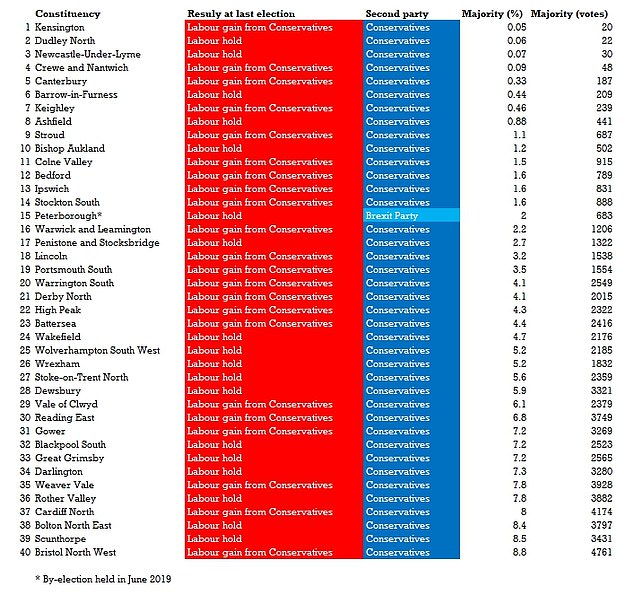 ‘Every vote for the Conservatives is a vote for an extreme Brexit agenda backed by Nigel Farage.’

While campaigning in Hartlepool on Tuesday, Mr Farage claimed he was offered a peerage last Friday.

‘Ridiculous – the thought they can buy me, a high-paid job; but I’m not interested, I don’t want to know,’ he told the Daily Mirror.

‘One week ago Donald Trump told Nigel Farage to make a pact with Boris Johnson. Today, Trump got his wish. This Trump alliance is Thatcherism on steroids,’ he said.

Asked if Mr Farage may pull out more candidates, Benyamin Habib of the Brexit Party told Newsnight: ‘This wasn’t choreographed. I think this was a decision that was come to after great consideration by Nigel.’