Swinging back into fashion, the plant with a risqué image: Pampas grass that was once linked to suburban wife-swapping makes a return to gardens

By Jonathan Bucks For The Mail On Sunday

It was once a popular fixture of British gardens but fell out of favour when it became linked to suburban wife-swapping.

But now pampas grass is back in favour, with florists reporting new demand for the exotic plant.

Sales slumped after rumours spread that homeowners who planted the feathery plumes in their front gardens were indicating an interest in swinging.

It was once a popular fixture of British gardens but fell out of favour when it became linked to suburban wife-swapping. The plant has certainly become popular in floral arrangements

Horticulturalists were quick to dismiss the claims as a silly urban myth, but the connotations still deterred many gardeners.

Now, however, a new generation, who are either unconcerned or unaware of the plant’s history, have taken to pampas.

Even if it hasn’t quite returned to its 1970s ubiquity in gardens, the plant has certainly become popular in floral arrangements, as millennials see it as a ‘green’ alternative to fresh flowers.

Leah Stageman, of wedding prop hire firm Boho & Bloom, reports a surge in the number of couples who want pampas leaves, which can cost up to £11 each.

‘It’s all part of the drive for sustainability. A lot of couples no longer want fresh flowers because of the environmental impact of growing and transporting them. People are instead opting for dried flowers such as pampas leaves that can be reused. Lots of brides are even wearing pampas headdresses on their wedding day.’ 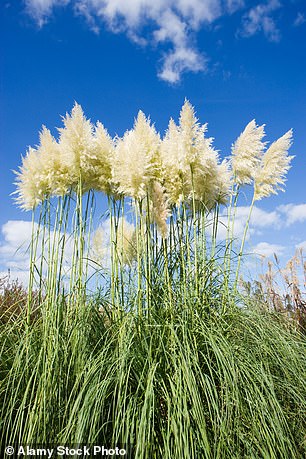 Now pampas grass is back in favour, with florists reporting new demand for the exotic plant

Celebrities such as Stacey Dooley are also using the leaves indoors.

Back in 2011, broadcaster Mariella Frostrup discovered that by leaving pampas plants on the balcony of her West London flat, she was inadvertently signalling that she was interested in sexually liberal hook-ups.

But last night she told The Mail on Sunday that she was seeing the plant everywhere.

Check this out  Pope waves goodbye and heads back to Rome

She said: ‘The idea that they are a sign for swingers is probably a little bit overblown. I live in rural Somerset now and it’s a popular plant there. I don’t think my village is alive with wife-swapping.’

She added that she kept a pampas plant that was in the garden when she brought her home, and it has attracted no unwanted interest.

Geoff de la Cour-Baker, from Palmstead Nurseries in Kent, said pampas was just one of the plants popular in the 1970s that were back in favour. Others include monkey puzzle trees.

Guy Barter, of the Royal Horticultural Society, said he wasn’t surprised at the renewed interest, explaining: ‘As a cut arrangement, it is rather splendid.’