Pennsylvania Attoney General Josh Shaprio has alleged knowledge of the abuse of more than 1,000 people at the hands of Catholic priests in Pennsylvania stretched all the way to the Vatican.

‘We have evidence the Vatican had knowledge of the cover-up, he told NBC’s Today on Tuesday, but clarified: ‘I can’t specifically speak to Pope Francis’.

The allegations come just two weeks after a grand jury of 23 released their report on sexual abuse of children in the Catholic Church after a two-year investigation.

While Shapiro declined to directly name Pope Francis as having anything to do with the cover-up, Archbishop Carlo Maria Vigano – the former papal representative to the US, made a series of explosive allegations towards the pope last week.

In his 11-page ‘testimony’, Vigano, 77, who was a papal nuncio in Washington between 2011 and 2016, said Benedict XVI imposed canonical sanctions against McCarrick in the late 2000s.

McCarrick was forced to leave his seminary and live a life of penance after former Vatican ambassadors in Washington, now dead, reported him for ‘gravely immoral’ behaviour with seminarians and priests.

Vigano claimed Francis asked him about McCarrick when he took office in June 2013, but that the pope ignored his warnings.

He said the pope ‘knew from at least June 23, 2013, that McCarrick was a serial predator’.

‘He knew that he was a corrupt man, he covered for him to the bitter end,’ he wrote.

During a press conference on board an airborne plane Sunday, the leader of the Catholic church would not comment when an American reporter asked him what his thoughts were in response to Vigano’s allegations.

The Vatican’s retired ambassador to the United States claimed despite the allegations, the pope rehabilitated McCarrick, but Francis brushed it off, simply saying the text ‘speaks for itself’.

Vigano’s extensive publication called for the pope’s resignation, just a month after McCarrick handed his in – making him the second person ever to lose his Cardinal status.

The Vatican expressed ‘shame and sorrow’ after the release of the Pennsylvania report, and decried the abuse as ‘criminally and morally reprehensible.’

During his recent visit to Ireland, the pope ‘begged for forgiveness’ for the institutionalized abuse that has plagued Catholic churches across the world.

‘To survivors of abuse of power, conscience and sexual abuse, recognizing what they have told me, I would like to put these crimes before the mercy of the Lord and ask forgiveness for them,’ Francis told a mass attended by more than 100,000 people at Dublin’s Phoenix Park.

‘We apologize for some members of the hierarchy who did not take care of these painful situations and kept silent.’

Since the report was released, more than 730 phone calls have come in to the state’s clergy abuse hotline, CNN reported.

The report identified more than 300 ‘predator priests’, and notes: ‘there may be more indictments in the future’, as investigations continue and more victims come forward.

Inside its 800 pages, horrific predatory behavior directed by clergymen at young girls and boys is laid out in graphic detail.

Their actions include making young boys rinse their mouths with holy water to ‘purify’ them after they were forced to give oral sex to clergymen and the abuse of one boy who was made to pose naked as Jesus while other priests took pornographic pictures.

The priests would mark out which boys had been groomed for abuse by giving them gold crosses to wear as necklaces, the report says.

The document refers to more than 300 priests in six diocese where children were raped, plied with alcohol, or forced to perform for clergymen to produce pornographic material since the mid-1950s.

Cardinal Donald Wuerl, the former longtime bishop of Pittsburgh who now leads the Washington archdiocese, was among the high-ranking clergy who turned a blind eye to the abuse.

The ‘real number’ of abused children might be in the thousands since some secret church records were lost, and victims were afraid to come forward, the grand jury said.

The 886-page report contains hundreds of examples of horrifying abuse. All were disturbing but some were particularly troubling.  They include;

Others, when questioned over their behavior, said ‘anything is possible’.

One, who targeted young boys, denied molesting two little girls by telling the church: ‘They don’t have a penis.’ 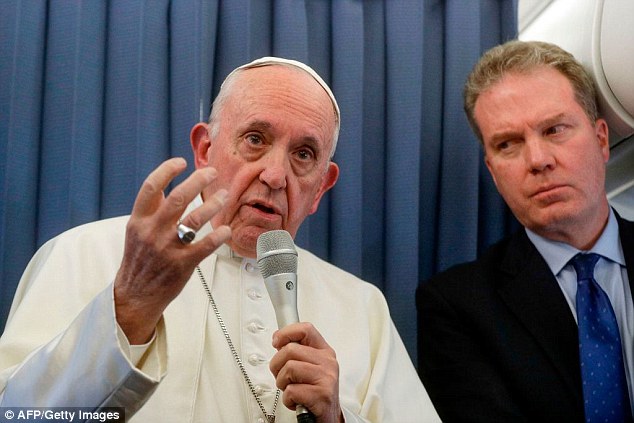 Pennsylvania attorney General Josh Shapiro says the Vatican knew about the systemic cover up of child abuse within the Catholic Church, but ‘couldn’t speak specifically to Pope Francis (pictured)’