People who have experienced homelessness have revealed what it’s really like to survive on the street.

After a person asked what homeless people do during the day on the question and answer site Quora, people who have slept rough in Europe and North America shared their stories.

Many said they hated the perception that homeless people are lazy or addicted to drugs or alcohol, saying they would focus on getting back on their feet by looking for work all day, before spending all night away if they didn’t have a safe place to sleep.

Some were forced to live on the street due to unforeseen changes in their circumstances, such as divorce or losing a job, while others admitted they partly lived on the street by choice. Some observed that a lot of people held jobs, but could not afford a place to live, therefor becoming ‘working homeless.’

However, others noted a sense of entitlement from other homeless people who were using drugs or alcohol as escape from their reality, with one saying they seemed to ‘relish their victimhood.’ 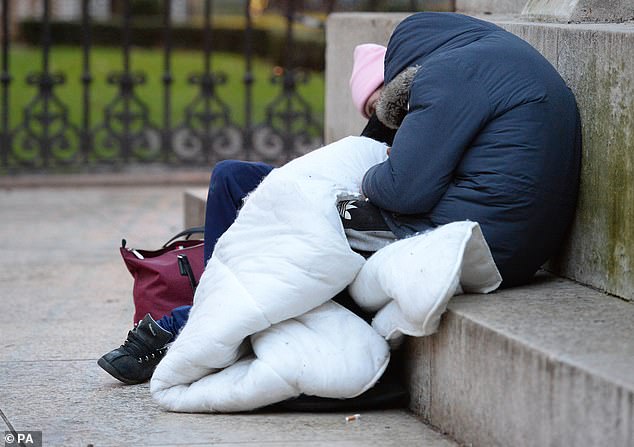 Homeless people sleeping rough in London, photographed on January 16 2020. Rough sleepers revealed what their daily lives on the streets really looked like

One man from Chicago revealed he would spend his days at the library, and would try to spend the night at a local shelter which required to attend religious services in the morning to get breakfast and at night to get a bed.

For food, he would rely on the church or shelter for lunch and Catholic charities for dinner.

A 26-year-old mother from California revealed she’s still currently homeless, even thought she had found a job.

Speaking about her everyday life, the homeless woman revealed she spent her day on Quora, trying to learn about new subjects, and deemed herself lucky that she had a phone to keep her connected to the world.

However, she admitted she was cut from what she called ‘the world of normies’.

She revealed she was homeless ’25 percent by choice, 75 percent because [she had] no other option at this point in [her] life.

She added that before she found a job, most of her day was spent trying to make money and to stay safe. She said she did not get much sleep because she often feared for herself at night.

‘Its dangerous for chicks on the street, even more so if they are alone,’ she said.

‘I don’t have any set routine…basically my day and night (I rarely sleep) consists of trying to “come up”.

‘I will panhandle for spare change at any store or gas station that is appropriate at the moment depending on time of the day, where I am at, etc.

‘I find that sitting on the curb by entrance with my coloring books and my 2 bags work just fine…the area I live in, the homeless regulars are known, and I am one of them.

‘I don’t sit with a sign, and I don’t walk up to people and ask for money because its honestly really hard to do that and it totally kills my pride big time.’

She said that being homeless opened her eyes to ‘how cruel people can be,’ and said she did not look at the general public as she used to.

People who had been homeless described their everyday life, especially their struggle to find shelter, and relying on others’ charity to get food

One man said he was living in his car with his brother after their landlord evicted them because they had fallen on rough times and failed to pay their rent on time for the first time ever. One of them had job and the other was on benefits, but they could not afford to pay rent.

Some said they would be trying to find ways to earn money, including stacking boxes or cleaning up the streets. Many said they’d focus their free time on looking for jobs, working on their CVs or sending applications.

One woman from Pennsylvania bluntly said she would be thinking of taking her own life in moments of deep desperation.

One man who had relied on sneaking at the back of a bakery to get food was desperate when other homeless people started to follow suit and were discovered by the owner, who locked the bread away

‘Without compassion and empathy from someone, I’ll probably be dead soon,’ she said.

A woman who used to be homeless but now work as a pet handler explained she used to be part of a community of fellow homeless people, she said: ‘We would all hang out and talk, drink, enjoy life as much as we could because people around us were dying.’

One man who admitted to sneaking at the back of some local bakeries to snatch some of the unsold bread and pastries recounted his despair when he was discovered by other homeless people who were in turn discovered by the owner, who locked the bread away.

He went on to say that once his access to baked goods was over, he went as long as two weeks without eating

Some people said they were still working while homeless because their meager income did not allow them to rent an apartment. Others had to live in their cars after being evicted

Many observed that due to rent prices or a mixture of circumstances, some people were forced to be homeless while holding down jobs, working 9-5 everyday but not earning enough to put a rough over their heads.

‘Despite the tremendous hassle, I continued to work. Monday thru Friday, I’d get up at 5:30 AM, do my assigned chores at the shelter, hop a 6:20 bus route that dropped me off about a mile away from work, where’d I’d hustle to make it on time. (8:30),’ one explained.

‘Then when work was done, I’d walk that mile back to the bus stop and get dropped off downtown to wait for the 8 pm shuttle back to the shelter; where I did my assigned evening chores and crashed by 9 pm,’ they went on.

One person who was homeless with their wives said working made every tiny detail a hassle, such as showering before work in the morning.

‘When my now wife and I were homeless, she got a job at a Subway downtown. It was not at all easy, and everything was 10x harder for her. Little things like even getting a shower every morning was extremely difficult,’ they said.

One man who went homeless for a year in California said most of the people he met on the streets were on drugs or drank heavily and were ‘entitled,’ adding some seemed to ‘relish their victimhood’

However, some Quora members who had experienced homelessness said they had noted a certain sense of entitlement from other people on the street, mainly the ones using drugs or heavily drinking.

An artist and bouncer named Dandy McCoogan, who went homeless for a year, had a different opinion entirely and said he witnessed very stereotypical behavior from the homeless community, including the regular consumption of drugs, drunkenness, fights and theft.

‘I have to say that 99 percent of the people I came across were not my peers so what they did during the day was beg or steal, drink and do drugs, and lie and fight with each other,’ he wrote.

‘And the sense of entitlement and victimhood was absurd. They loved fooling the so-called squares or whatever with sob stories, getting cash, promising to go straight,’ he added.

‘They are desperate and stupid people and seem to relish their victimhood. It gives them license to be the worst of humanity,’ he went on.