An explosive picture has emerged that proves extreme anti-Israel activist Miko Peled was inside Labour conference with a security pass, despite the party denying this.

A Labour spokesman yesterday claimed the notorious figure ‘does not have a pass and has not been inside conference’, after a picture of him embracing Jeremy Corbyn outside the venue sparked outrage.

But today MailOnline can reveal evidence that the activist – who has described Jews as having ‘a reputation for being sleazy thieves’ – attended conference as a fully accredited delegate.

The picture was taken on Sunday at 12:36pm, inside the ACC Liverpool building in front of the Labour Students stall, we can disclose.

On its website, Labour points out: ‘The ACC forms part of the Conference Zone and anyone wishing to enter must be accredited’. 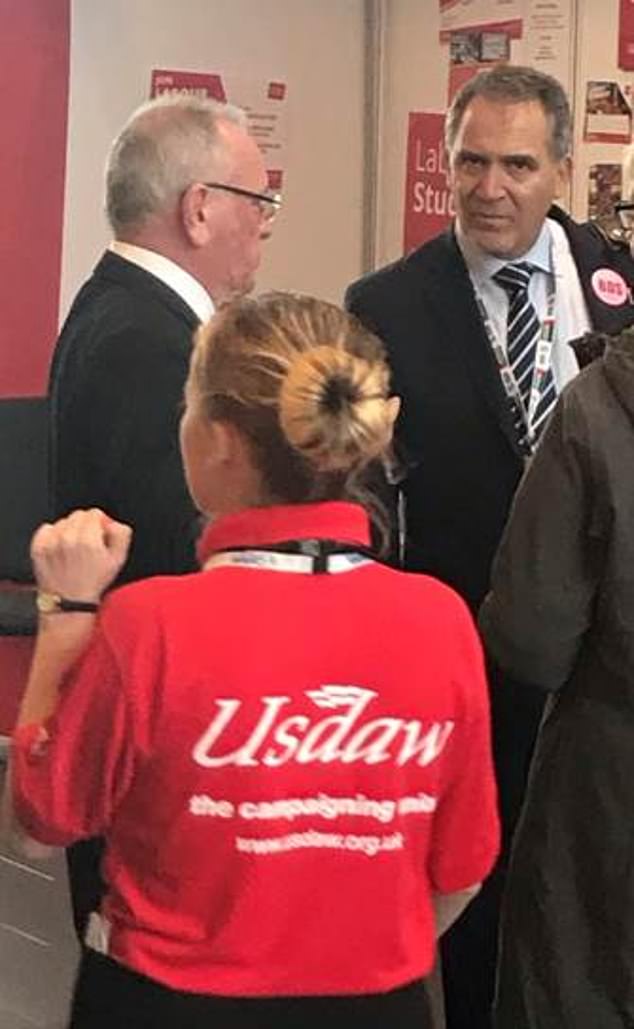 This is the explosive picture that proves that extreme anti-Israel activist Miko Peled was inside Labour conference with a security pass, despite the party denying this 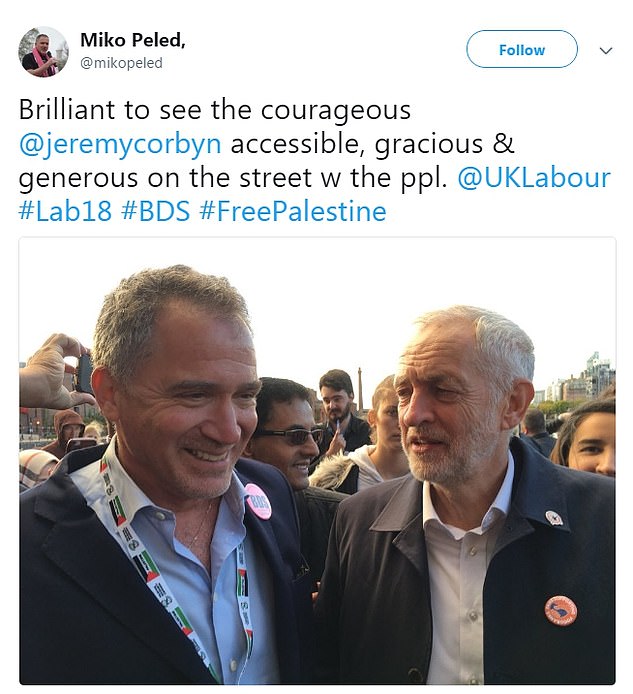 A Labour spokesman yesterday claimed Mr Peled ‘doesn’t have a pass and has not been inside conference’, after a picture of him embracing Jeremy Corbyn outside the venue sparked fury

The standard security pass, which has a picture, full name and barcode, can be seen in the picture, hanging around Mr Peled’s neck.

Shadowed by a minder, the activist, who was slammed by Labour last year for questioning the Holocaust, had just been at a stand run by the Palestine Solidarity Campaign, of which Mr Corbyn is patron.

He was received as ‘a bit of a minor celebrity’ by supporters, witnesses told MailOnline, chatting with pro-Palestine activists as he circulated inside the conference venue.

On a separate occasion, Mr Peled was spotted talking with members of Jewish Voice for Labour, a hardcore group of anti-Israel Corbyn supporters which rejects the internationally recognised definition of anti-Semitism.

This year’s Labour conference is taking place inside two buildings within a secure zone. Mr Peled was sighted mingling with crowds in both locations.

Today, a Labour spokesman told MailOnline: ‘He appears to have registered under his other name. As soon as we became aware, his pass was immediately revoked.’

The spokesman did not disclose exactly when the pass was nullified.

The revelations will embarrass Mr Corbyn just hours before he is due to take the stage to address conference in a keynote speech.

Yesterday, Mr Corbyn provoked shock when he posed for a ‘selfie’ with Mr Peled outside the venue. Mr Peled posted it on social media, praising the Labour leader as ‘courageous, gracious and generous’.

In response, a Labour spokesman suggested that Mr Peled ambushed Mr Corbyn as he was on his way to his car and was not a conference delegate.

The spokesman said: ‘Miko Peled is not attending Labour Party Conference. He does not have a pass and has not been inside conference.

‘This event is not being advertised by the Labour Party and is not taking place on the conference site. Jeremy has been stopped by hundreds of people in Liverpool over the last few days.’ 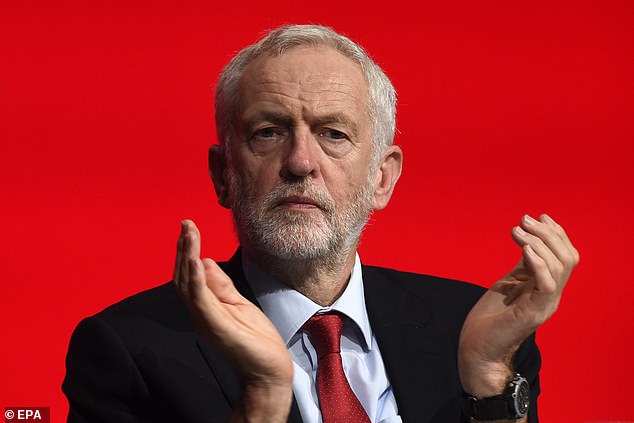 A fringe meeting where Mr Peled was due to speak was then removed from the Labour conference app.

Last year, Mr Peled was slammed by senior Labour figures – including deputy leader Tom Watson – after he compared Israel to the Nazis at the conference in Brighton.

During a fringe event entitled Free Speech on Israel, he demanded that people be encouraged to ask, ‘Holocaust: yes or no’.

He has also compared Zionists to Nazis and complained about a ‘witchhunt against anti-Semites and Holocaust deniers’ in the Labour party.

Gideon Falter, chairman of the Campaign Against anti-Semitism, said: ‘Having issued Miko Peled with a conference pass, the Labour party has taken the public for fools and lied about it.

‘It is impossible to believe that the Labour party means a word about anti-Semitism when people like Mr Peled are accredited to walk its conference floor.’

A Labour source told the Telegraph that Mr Corbyn did not know Mr Peled.

Check this out  Postman hoarded 24,000 items at his home near Tokyo because delivering them was 'too much bother'

However, the paper reported, Elleane Green, an ally of the Labour leader, wrote in April 2013 that Mr Corbyn had attended a 30minute meeting hosted by Mr Peled in the House of Commons.

Karen Pollock, the director of the Holocaust Educational Trust, said the scandal was ‘precisely the sort of thing that gives every signal that it is free rein for anti-Semites in the Labour Party.’

‘Why would a political leader who claims to have been against racism all of his life want a picture with him?’ she said.

Mr Peled, an Israeli-American, said at a fringe event at Labour conference last year that ‘they’ – an apparent reference to Jews or Israelis – did not want Mr Corbyn to enter Number 10.

‘This is about free speech, the freedom to criticise and to discuss every issue, whether it’s the Holocaust: yes or no, Palestine, the liberation, the whole spectrum. There should be no limits on the discussion,’ he said.