Rather than being in the thick of the action Boris Johnson found himself at the edge of the picture – literally – at the G7 summit this evening as stood alone at one edge of the ‘family portrait’ of world leaders.

The Prime Minister stood next to South African President Cyril Ramaphosa, a guest at the summit, at the far left of the frame for the formal photo call at dusk in Biarritz.

Mr Johnson may take some small comfort that EU council President Donald Tusk, with whom he has sparred this weekend over the possibility of Britain leaving the EU without a Brexit deal, looked equally far from the action, at the opposite edge of the row of leaders. 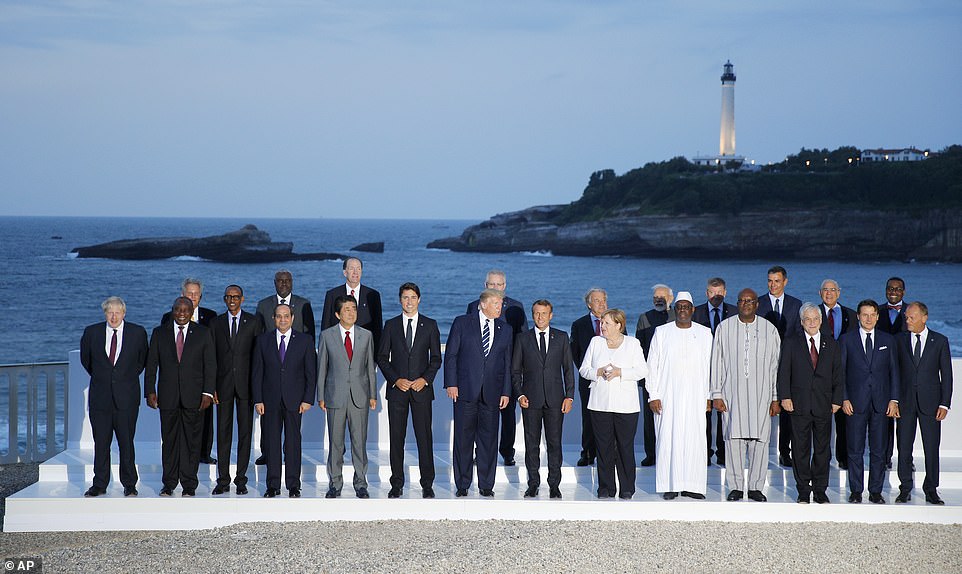 Mr Johnson, left, found himself some distance away from the central position taken buy US President Donald Trump and summit host Emmanuel Macron for this evening’s group portrait 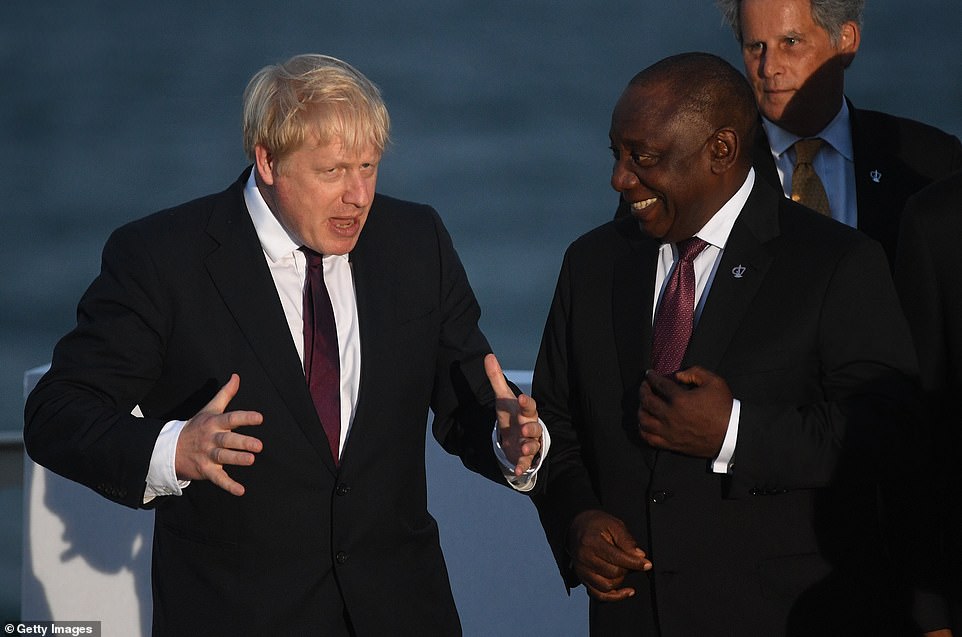 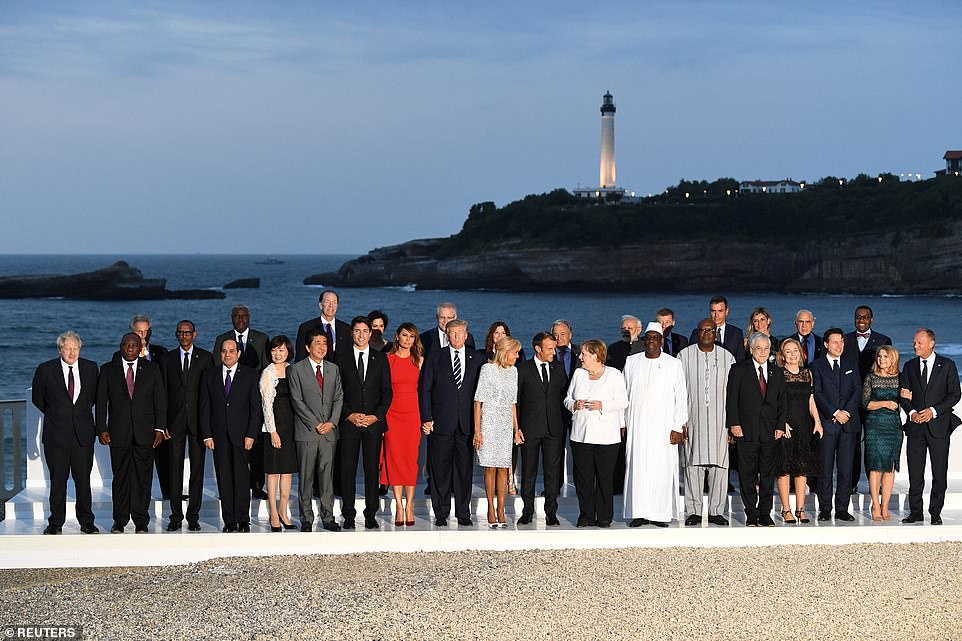 The situation was not improved by the arrival of the world leaders’ spouses, which left Mr Johnson at one edge of a row of 19 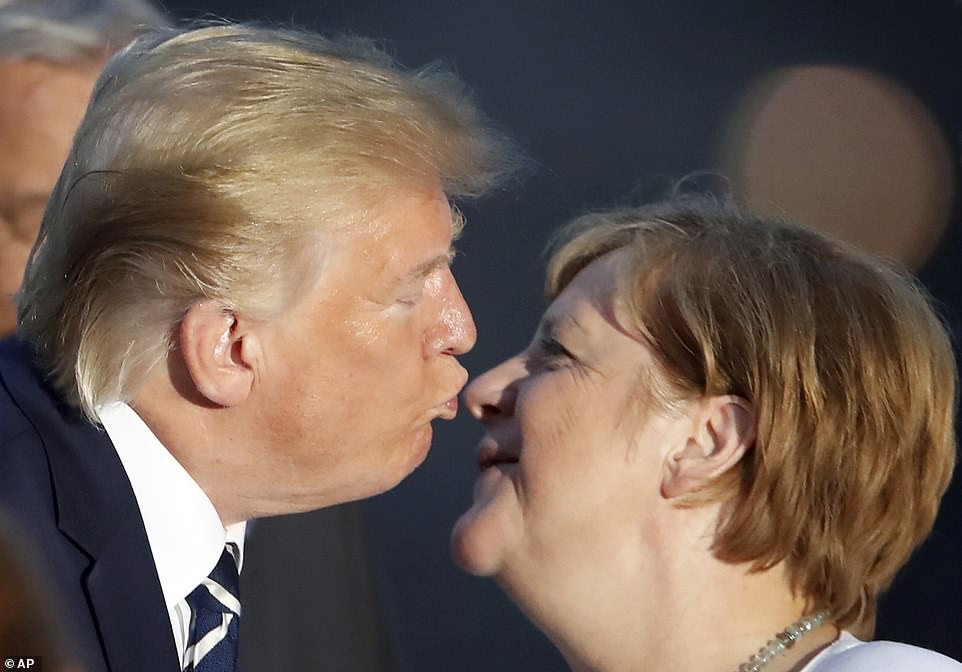 Mr Johnson’s peripheral position was only exacerbated once the leaders’ spouses joined the photo shoot, forcing him to the edge of a row of 19 leaders and their respective wives and husbands, as his partner Carrie Symonds did not make the trip to France.

The group posed for photographs at the end of a day in which Boris Johnson lengthened his predicted odds on the UK achieving a Brexit deal from the EU, saying striking an agreement is now just ‘touch and go’ having recently described it No Deal as a ‘million-to-one’ chance.

He also warned EU Council President Donald Tusk that Britain will not pay all of the £39 billion Brexit divorce bill if the UK does have to leave the bloc without a deal on October 31, as the two men met for showdown talks in Biarritz.

The Prime Minister made clear to the president of the European Council that Brussels may get just £9 billion – or even as little as £7 billion – if the UK leaves the EU without an agreement at the Halloween deadline.

Speaking prior to today’s meetings Mr Johnson told ITV: ‘If we come out without an agreement it is certainly true that the £39 billion is no longer, strictly speaking, owed.’

Meanwhile, the PM told the BBC it was ‘touch and go’ whether the UK would leave with a deal and insisted it ‘all depends on our EU friends and partners’ as he also told Sky News that the chances of an agreement ‘are improving’.

Mr Johnson used the meeting at the G7 with Mr Tusk to try to persuade him to support a plan put forward by Angela Merkel and reluctantly backed by Emmanuel Macron to give the UK 30 days to come forward with alternatives to the Irish backstop.

He also stressed the UK will leave the EU on October 31 whatever the circumstances. 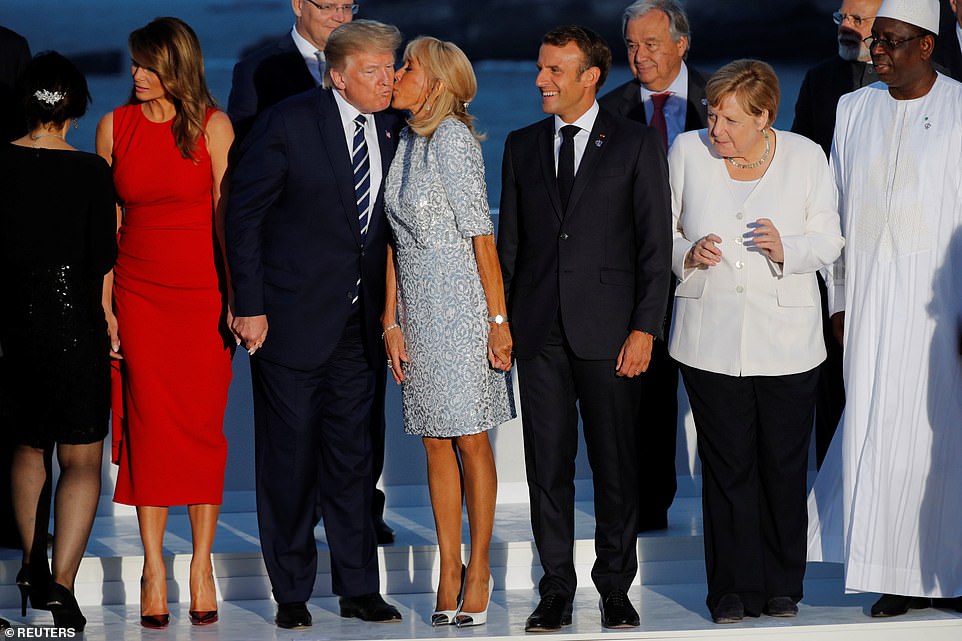 Donald Trump received a Gallic peck on the cheek from Brigitte Macron, the French President’s wife, this evening 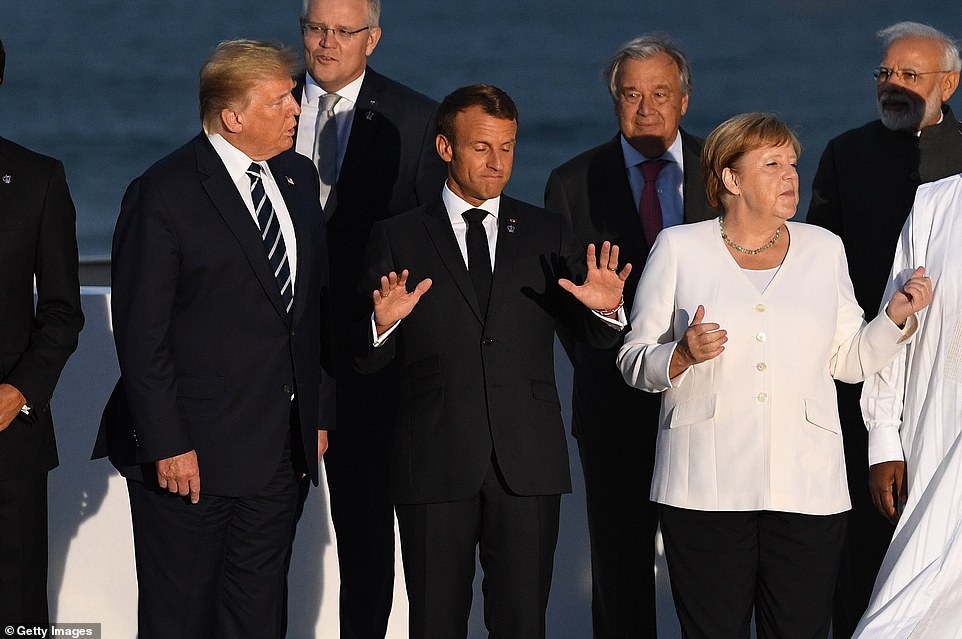 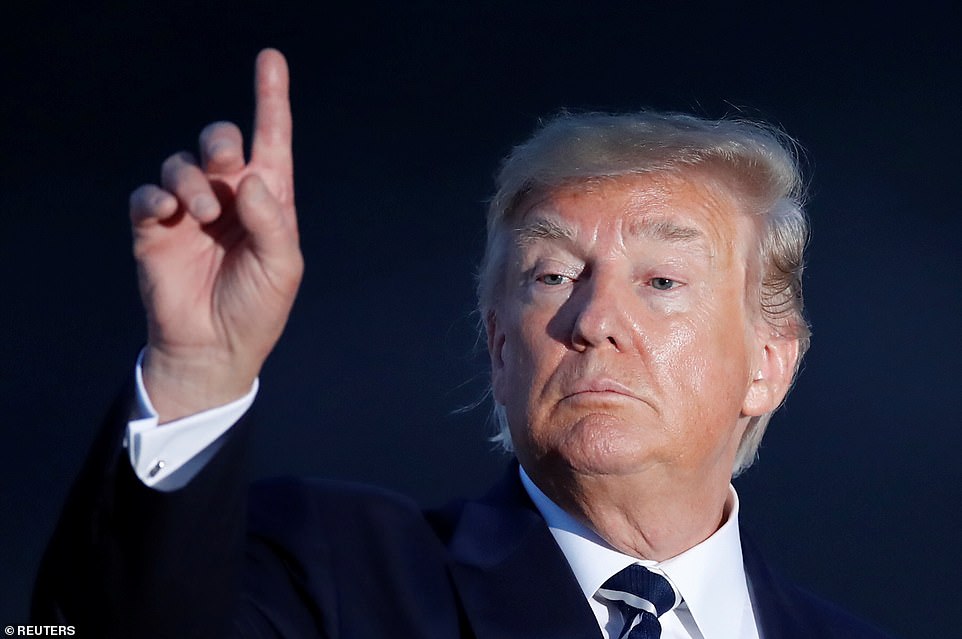 The American President was full of warm words for the British Prime Minister earlier today, calling Johnson the ‘right man’ to take the UK out of the EU 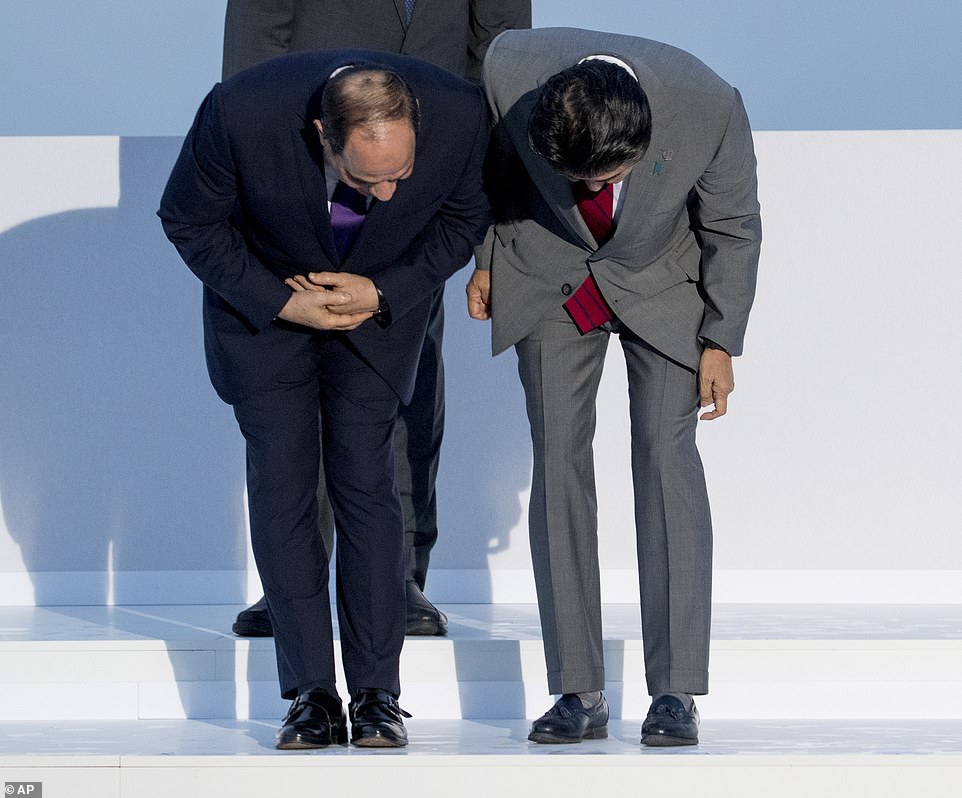 An EU official said after the meeting that nothing substantive or new had emerged during the talks, with the pair due to meet again at the United Nations General Assembly next month.

It came after Donald Trump hailed Mr Johnson as the ‘right man’ to take the UK out of the EU and predicted the US and Britain will be able to strike a ‘very big trade deal’ and ‘pretty quickly’ once Britain has left the bloc.

Mr Johnson welcomed the positivity from Mr Trump as they met this morning, but warned the US President that the NHS will be ‘completely off limits’ during post-Brexit trade talks.

Speaking after their meeting, Mr Johnson said Mr Trump was ‘gung-ho’ about doing a deal and that the US wanted one finalised within a year as he added: ‘I’d love to do it within a year, but that’s a very fast timetable.’

The UK PM also risked a row as he challenged Mr Trump over the wisdom of his trade war with China.

Mr Johnson said he preferred ‘trade peace’ to hiking tariffs in comments likely to have been poorly received by the White House.

Mr Johnson’s meetings with Mr Trump and Mr Tusk came amid growing speculation that he could call a snap general election within weeks after it emerged he is planning to slash fuel duty at an emergency No Deal budget, paving the way for an early poll in October.

The likelihood of a snap election appeared to increase today as a YouGov poll for the Sunday Times put the Tories 12 points ahead of Labour on 33 per cent in Westminster voting intention. 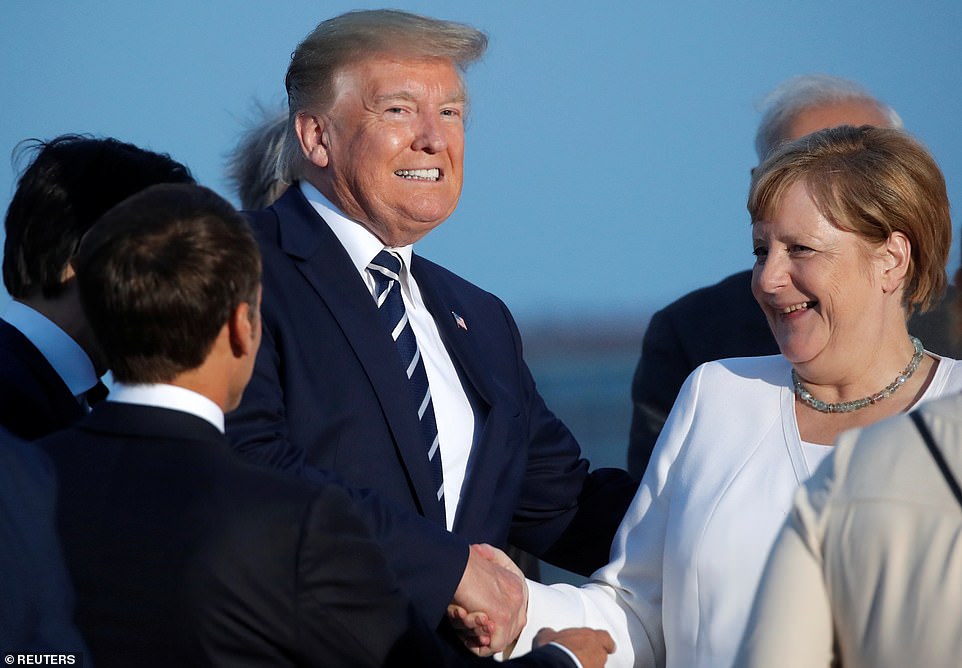 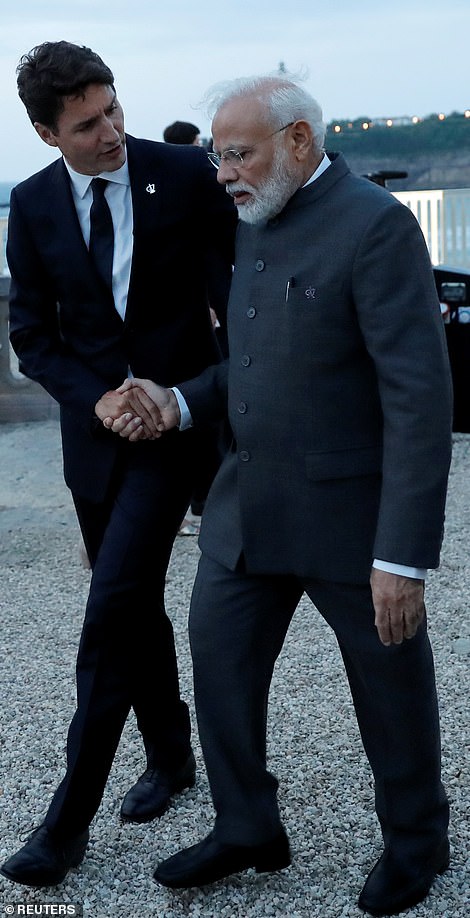 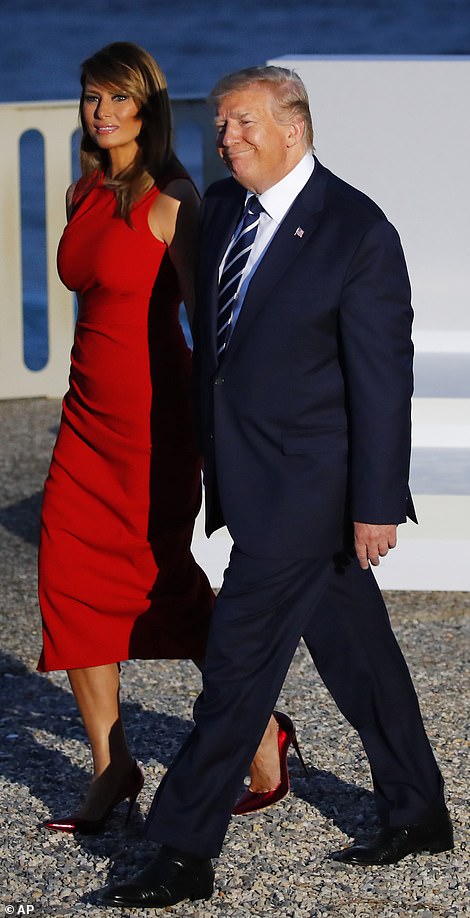 Check this out  Shocking injuries of grandmother, 70, who was savaged by a vicious 'Staffy'

Mr Johnson’s second day at the G7 summit got off to a good start as he met Mr Trump for formal talks and the US President predicted he would be a ‘great prime minister’.

The two men had been effusive in their praise for each other before meeting and that trend continued today as Mr Trump said Mr Johnson would not need his help to take Britain out of the EU.

Mr Johnson jokingly said Mr Trump was ‘on message there’ as the US President then described the UK’s EU membership as an ‘anchor’ and predicted a bright future for the special relationship once the UK has split from Brussels.

He said: ‘We are having very good trade talks between the UK and ourselves. We are going to do a very big trade deal, bigger than we have ever had with the UK.

Mr Trump said a deal could be done ‘pretty quickly’ as he also claimed Theresa May had ‘stymied’ trade talks when she was PM.

Mr Johnson said he expected there to be ‘tough talks ahead’ as he tried to lay the groundwork for a swift post-Brexit trade deal, having warned the NHS will be ‘completely off limits’ during negotiations.

Asked if he had made clear his views on the NHS with regard to trade talks, Mr Johnson said: ‘Not only have I made clear that, the president has made that very, very clear. There is complete unanimity on that point.’ 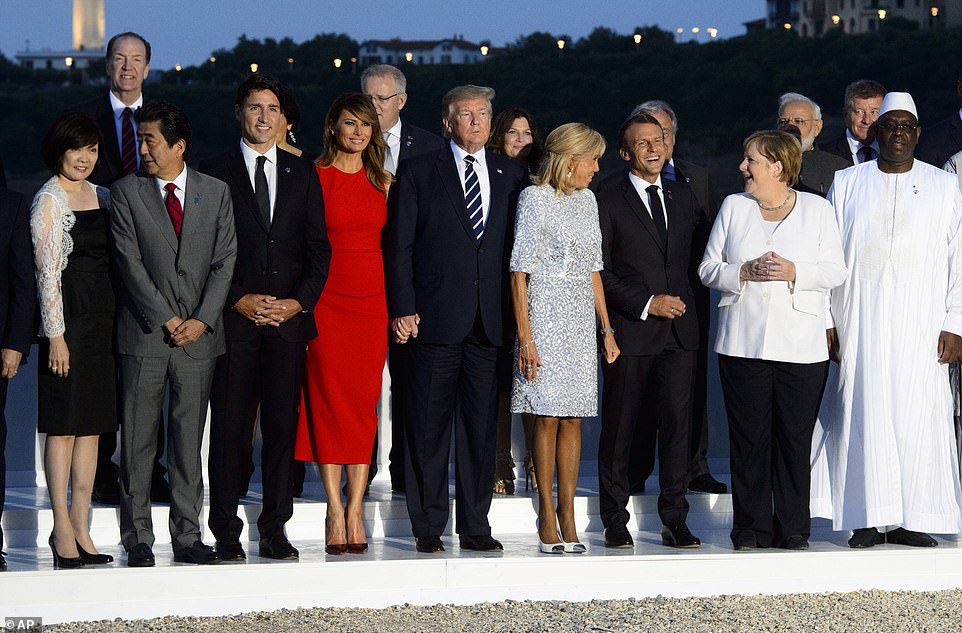 All smiles: Justin Trudeau, Melania Trump, Brigitte and Emmanuel Macron, and Angela Merkel were all beaming this evening