Police rescue a dog from £56,000 BMW by smashing the window as temperatures hit 66F in Essex

A dog is saved from a hot locked car after the window is smashed to free the animal as crowds watch on and cheer.

People gathered around the black £56,000 BMW as an officer tries to burst through the glass with her baton, and then a hammer, but is unable to break the glass.

The window is eventually smashed by a man believed to be a bystander and is met with a standing ovation as the dog is carried away from the hot box BMW X5.

The incident happened outside the Borough Hotel on Marine Parade in Southend-on-Sea, Essex and was posted to Facebook by the page ‘London Crime LDN’ last night captioned: ‘This happened in Southend-on-Sea please never leave your dog alone in a car.’

The video shows a police officer hit the driver side window with her baton, however the baton was not strong enough to break through the glass.

Bystanders are heard cheering and shouting ‘go on!’ as a man gives the police officer a hammer which was met with a large cheer and clap from the crowd.

One woman is heard shouting: ‘Do it, now, do it.’ Whilst a young boy covers his ears for protection.

The officer appears to speak into her radio before whacking the window four times. 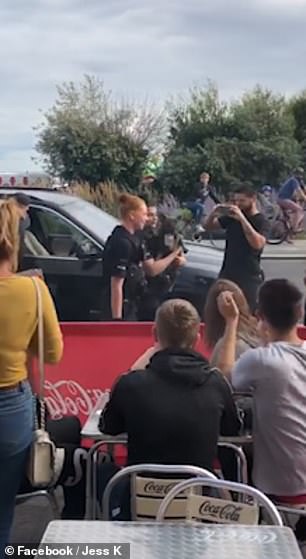 At first the police woman attempts to break through the window with her baton but is unable (left) a man, believed to be a bystander hands her a hammer (right)

Yet, the window refuses to shatter. The unsatisfied crowd demands the officer whack harder.

The man who offered the hammer in the first instance offers to smash it for her. The crowd cheer once more.

The man hurls the hammer forward and smashes the BMW window which was met with rapturous applause.

Another angle shows the extent of the crowd watching as many bystanders are seen clapping and fist pumping the air in joy.

Police officers surround the window as they try and rescue the dog trapped inside.

The dog is eventually lifted from the car and the crowd cheer and clap a the canine is carried away to safety.

The video has enraged many in the comments who feel the owner of the black BMW should face justice. 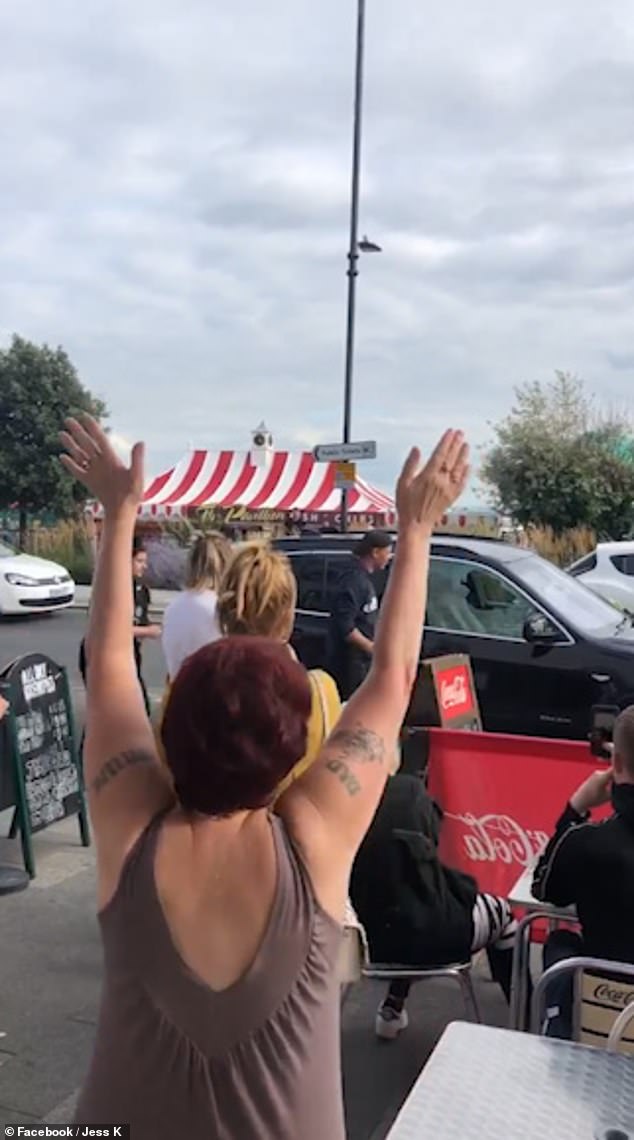 Nicki Quinn said: ‘Good. Now crush the car, charge the owners for the police time which could have been spent elsewhere and rehome the dog to decent owners.’

Lee Piper added: ‘Now wait for owner, cuff them to a locked police car with the windows up while the police take the dog to the vets! And put a thick coat of the owner too.’

Sarah Charles wrote: ‘Do not let the owner ever have the dog back. Seize the car also. Name and shame owner.’

Dave Smith said: ‘People 100 per cent just enjoy seeing a car window being smashed, obviously they want the dog to be saved as well, but the windows entertainment.’

This comes after police in Plymouth, Devon were forced top smash a car window to save a dog from the sweltering heat on Wednesday.

The dog was trapped in the back of the vehicle parked in a car park after it was spotted by shoppers.

it is understood the owners of the car were not happy that their window was smashed according to the officers on the scene. PCSO Tracy Cunningham said: ‘They weren’t happy with us because their window was put in.’