The Duke of Cambridge joined British and Kuwaiti forces taking part in a military exercise as his visit to the Gulf state drew to a close.

William, 37, watched a demonstration of urban tactics and close-quarter battle techniques, before speaking to the service personnel during a visit to the Sheikh Salem Al Ali Alsabah camp in Subia outside Kuwait City, Kuwait.

The troops were taking part in Exercise Desert Warrior, a biannual training event which sees a company of UK troops train alongside Kuwaiti forces and share expertise.

Defence and security have formed the cornerstone of the UK-Kuwait relationship, particularly following Britain’s role in the liberation of Kuwait in 1991 after the Iraqi invasion.

The Duke appeared to be in high spirits as he chatted with soldiers, before watching the training exercise take place.

Later, William, who served in the British armed forces, ending his active military career as an RAF search and rescue helicopter pilot, will travel to Oman for the second leg of his Middle East tour. 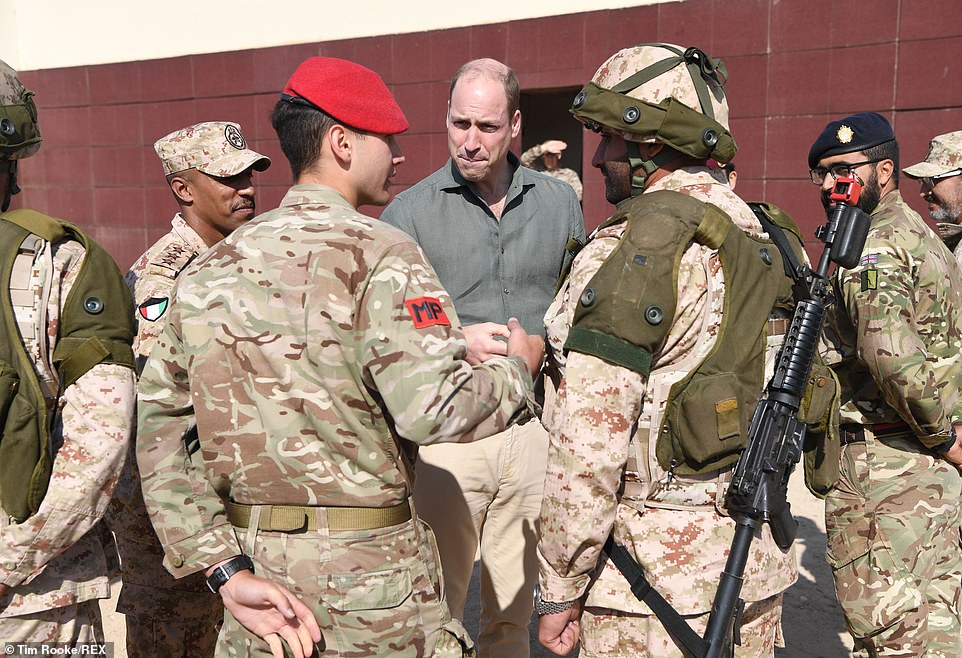 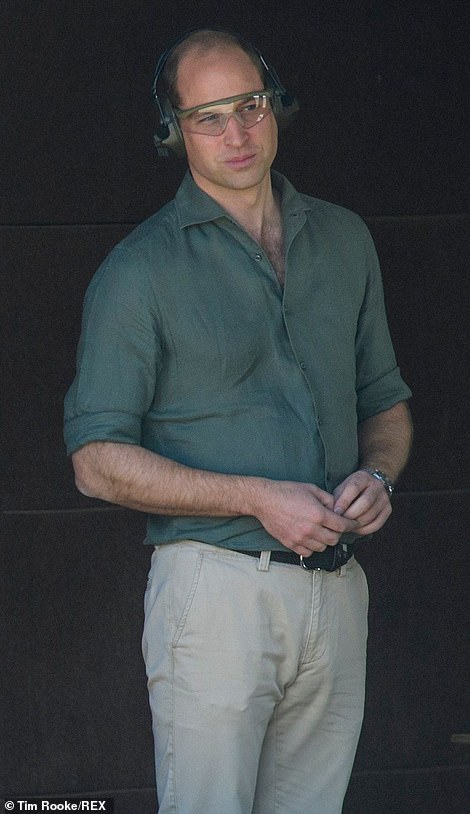 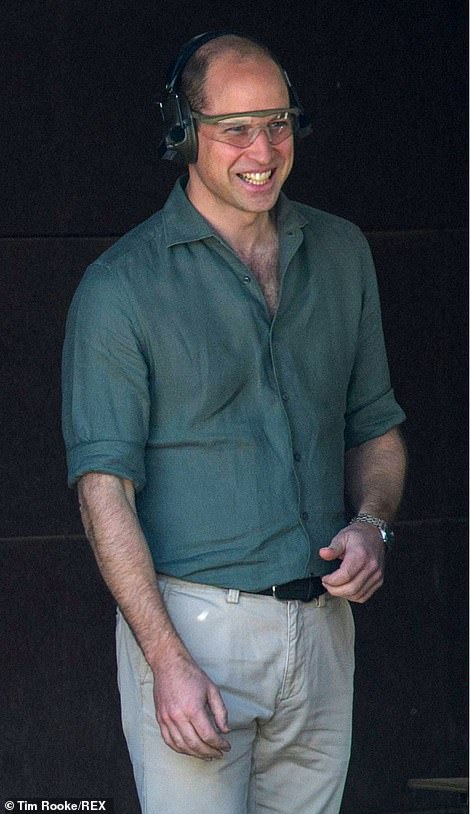 William, 37, looked to be enjoying himself as he watched a demonstration of urban tactics and close-quarter battle techniques 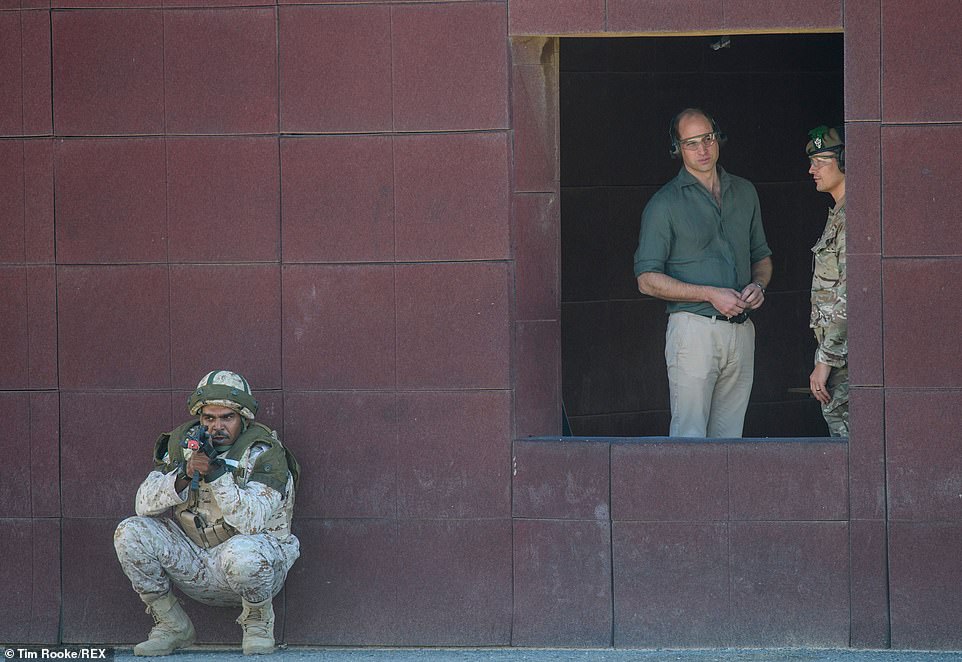 The troops were taking part in Exercise Desert Warrior, a biannual training event which sees a company of UK troops train alongside Kuwaiti forces 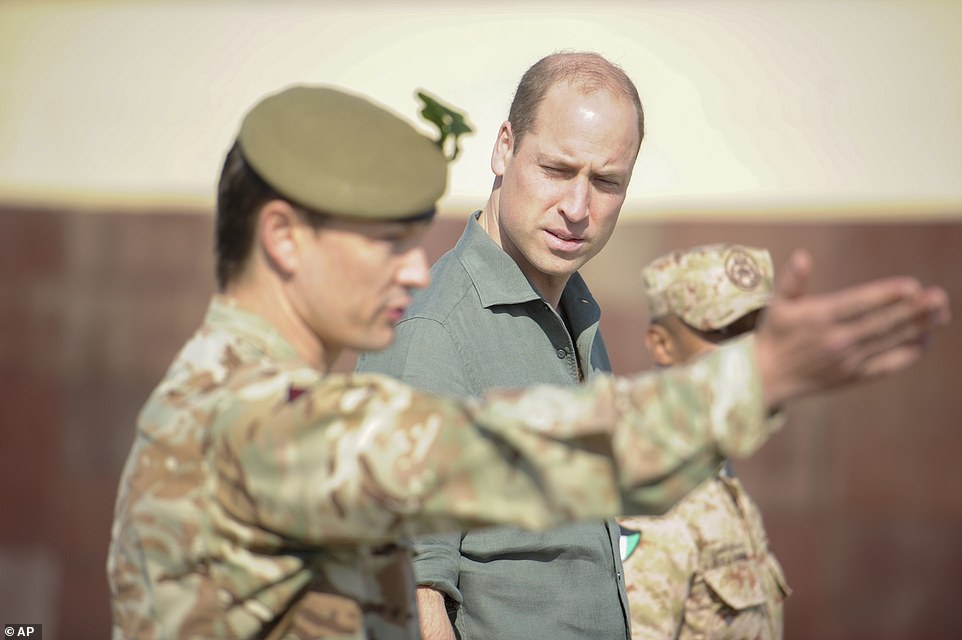 As well as watching the joint military exercise, William was given a tour of the base by soldiers, who he spent time talking to

Check this out  Greggs giving away 200,000 FREE bakes - but you have to be quick 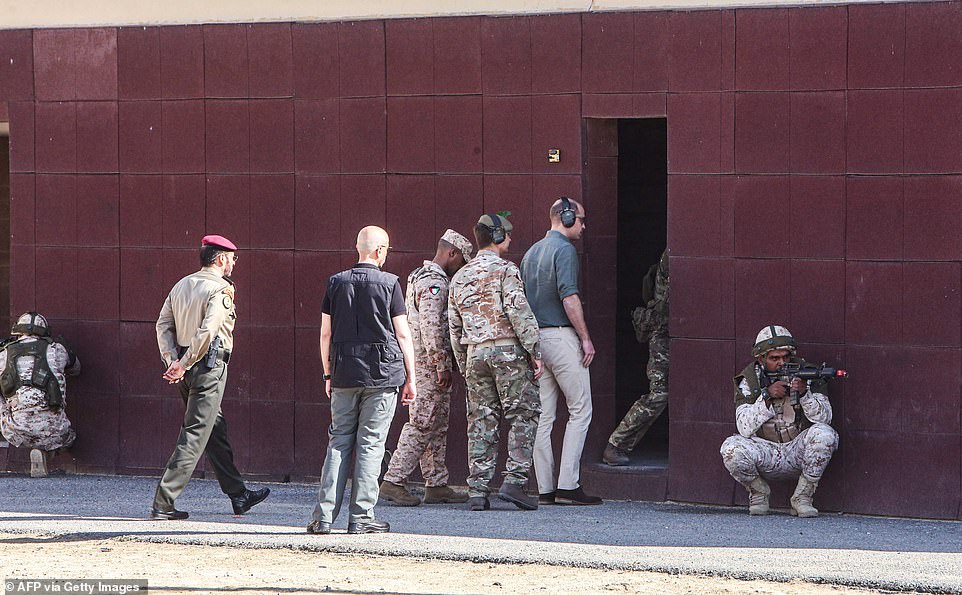 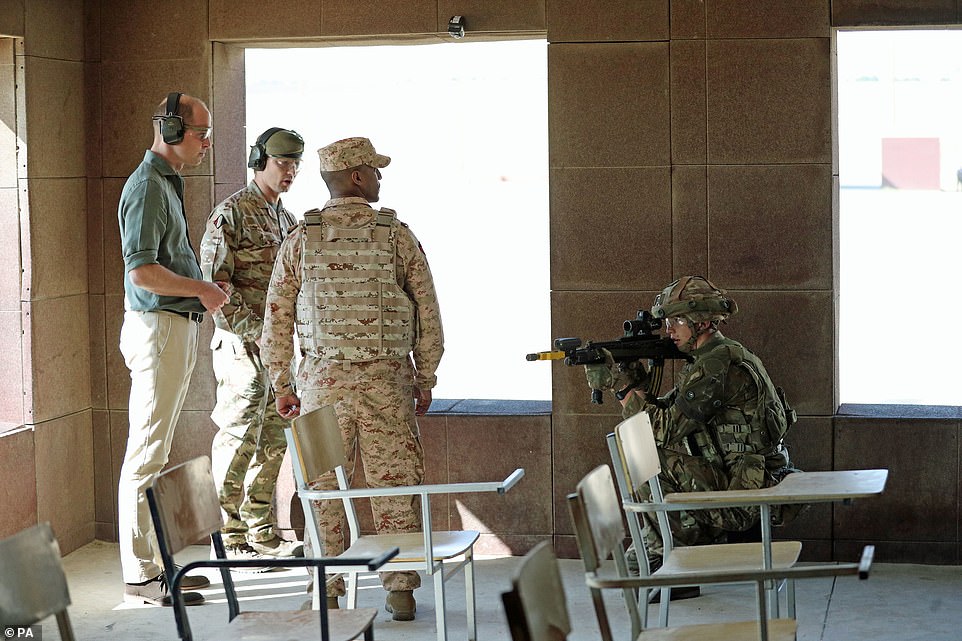 He had arrived in Kuwait on Sunday, discussing recycling with a group of pupils from the Qurtoba Secondary School for Girls, before sharing his love of Aston Villa with schoolboys.

William told the group of Kuwaiti schoolboys how he rushed to a screen on Sunday to see his football club take on Manchester United, holding them to a draw.

His sporting confession came during a visit to an educational cultural centre where he showed off his reactions – hitting lights to test his reflexes, and shooting hoops during a basketball event.

‘They played yesterday against Manchester United – a two-all draw. I tried to watch it as soon as we landed I was as quick as we could,’ he added.

After the arrival ceremony at Kuwait International Airport on Sunday evening, the duke would have been able to watch the second half of the match which kicked off at 4.30pm in Manchester.

During his visit to the Sheikh Abdullah Al Salem Cultural Centre, the duke, who stands 6ft 2ins tall, was left almost bent double when he took on the reaction challenge. 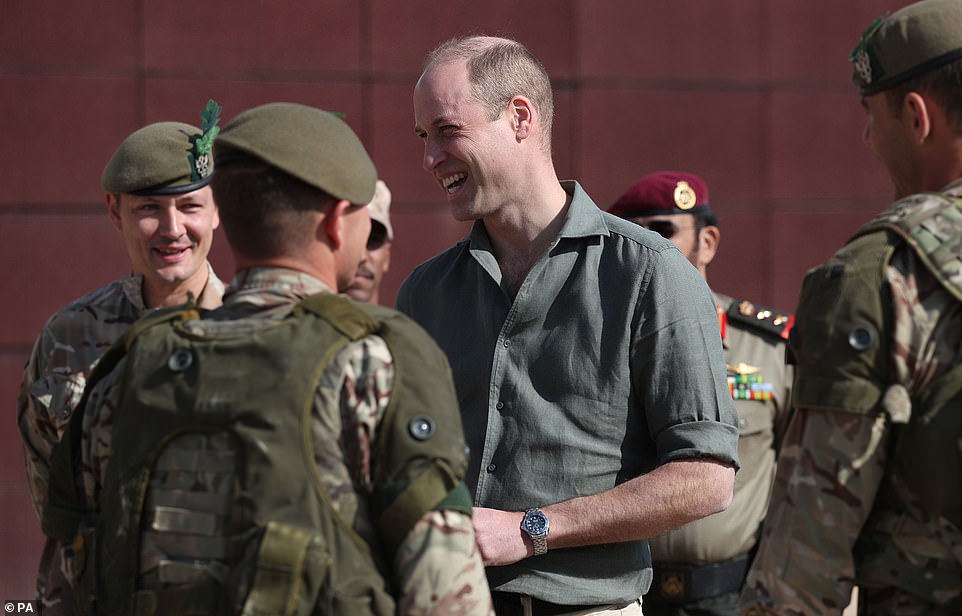 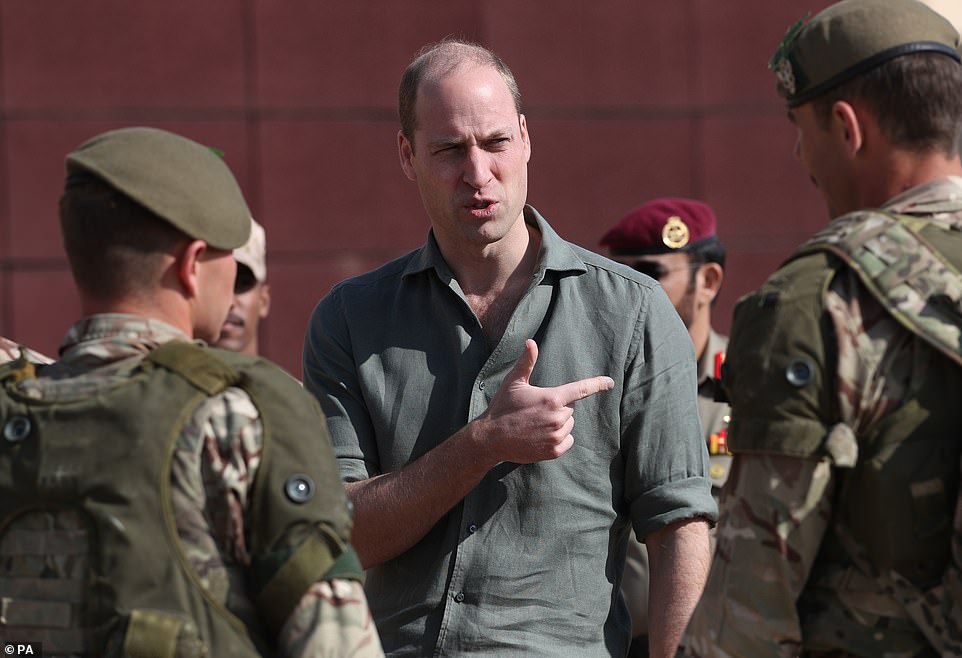 The Prince took time to speak to both British and Kuwaiti soldiers, before retreating to watch them carry out the military exercise 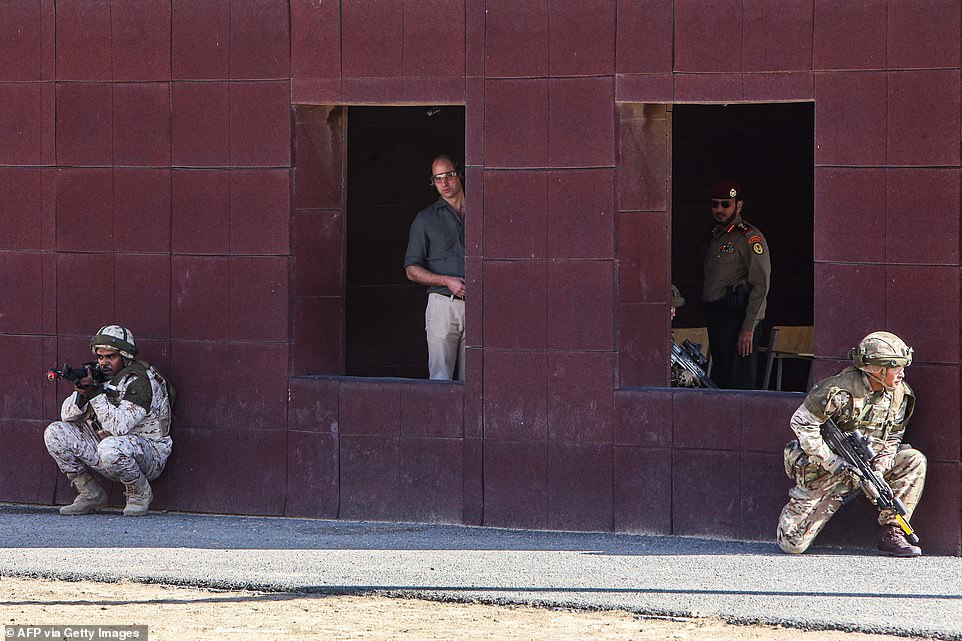 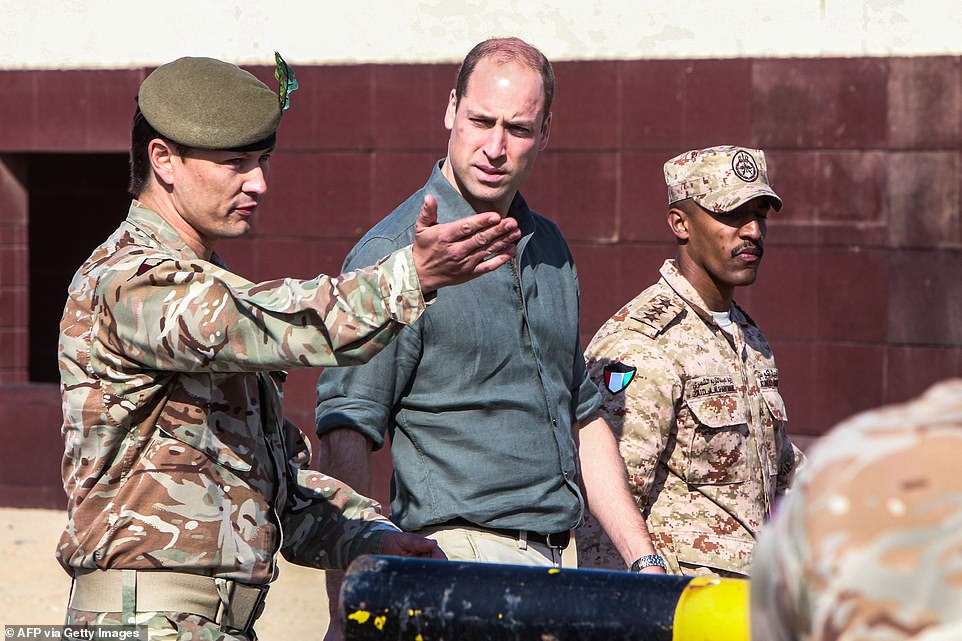 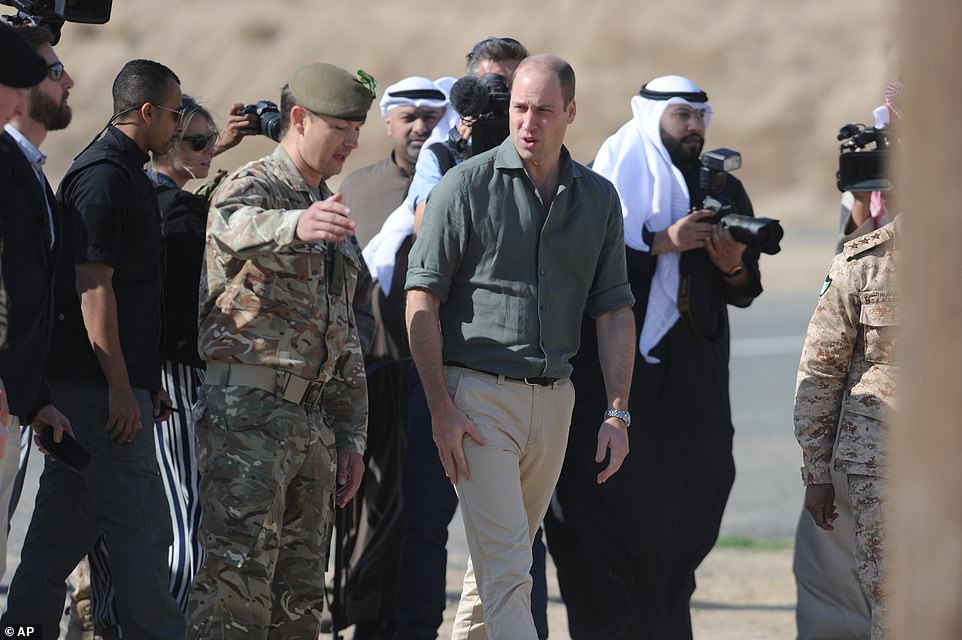 ‘The lights are too low for a tall guy,’ he said as Bashar Huneidi, one of the Gulf’s few alpine skiers, told the royal how the reaction game worked.

Later he played an interactive game of basketball with the boys, where they had to throw the ball at a hoop whenever one, out of a group, lit up.

Earlier, the royal had met a group of pupils from the Qurtoba Secondary School for Girls who told the duke about their Trash to Treasure composting project.

William joked: ‘I go outside and throw it in’, adding with a laugh ‘am I doing it right?’ as one of the schoolgirls told him he had to layer his bin scraps to get the best results.

During his visit, he also revealed that his family recycles ‘as much as we can’ but he has concerns about what happens to their waste. 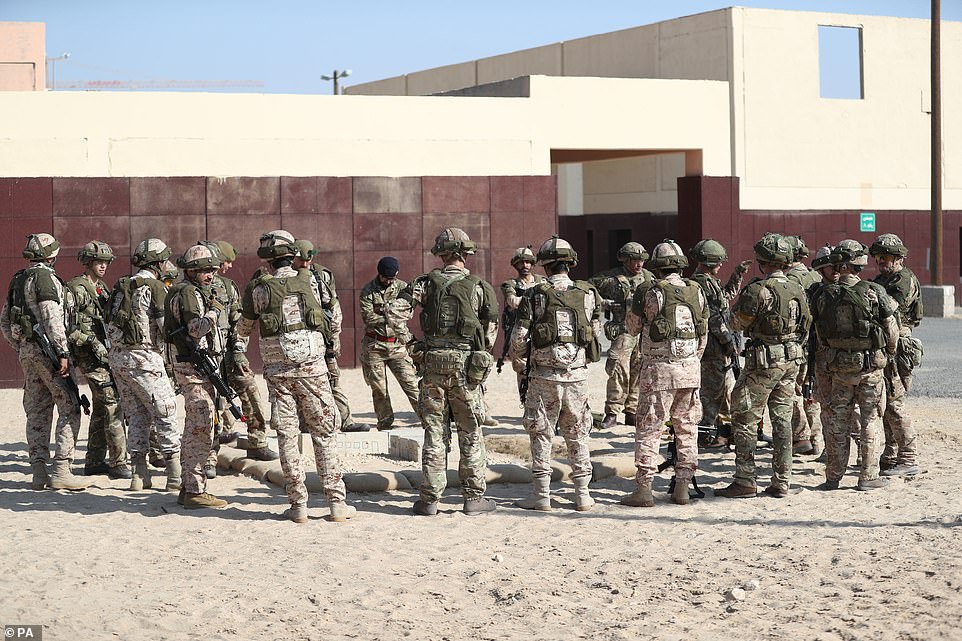 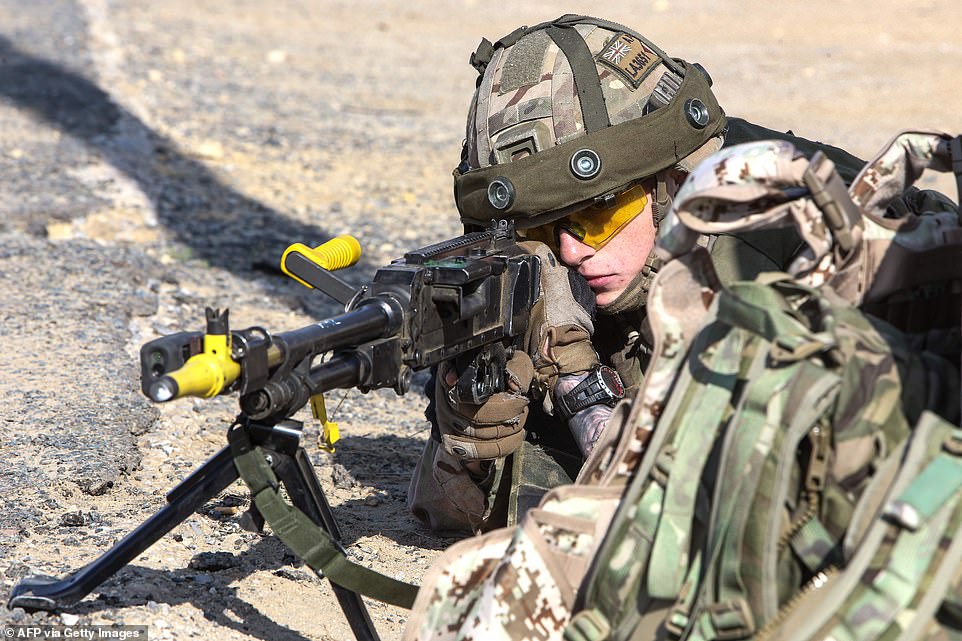 A British soldier looks through the scope of a FN MAG machinegun, while taking part with Kuwaiti soldiers in the Exercise Desert Warrior 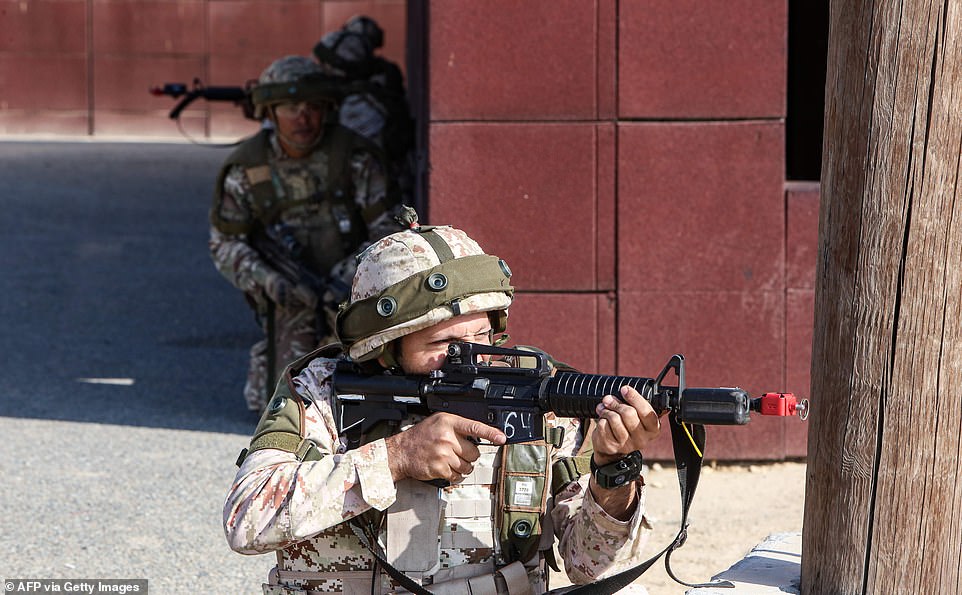 Kuwaiti and British soldiers take part in the Exercise Desert Warrior, attended by Prince William, who watched the action from a building

William’s comments came as he joined litter pickers on a beach in Kuwait, tackling the scourge of plastic pollution, and indulged in a spot of birdwatching.

Speaking during a visit to the windswept Jahra nature reserve near Kuwait City, where the volunteers were working, the duke told the young environmentalists: ‘Where does your recycling go? Out of town?’

William, who had just begun his four-day tour of the Middle East at the time, added: ‘We recycle as much as we can at home but I worry about the chain, what happens to it? We need joined-up thinking – it’s a joined-up effort.’

The royal spoke about his disgust at the use of plastics and described the material as the ‘enemy’.

He said: ‘We’ve made sure we are travelling here we only take our metal bottles with us. Lots of metal bottles.

‘I hate plastic bottles now and I look at them and I literally think it’s the enemy – you see a plastic bottle and I’m like ‘eugh!’ Horrible isn’t it?’