Queen’s statement decoded: What Her Majesty said (and what she really meant) as she announced Prince Harry and Meghan Markle are quitting

The Queen expressed the importance of family in her statement tonight and told how she is ‘particularly proud’ of her grandaughter-in-law Meghan Markle.

Her Majesty used a deeply personal tone and referred to her ‘family’ four times throughout the statement with the use of three ‘I’s’ and three ‘my’s’ throughout its five paragraphs.

She commended Meghan for how swiftly she has become part of the Royal Family and thanked the couple for the dedicated work they have done.

Despite being surprised by Harry and Meghan’s announcement on January 8 that they wished to step back as senior royals, the Queen revealed that she had been aware of the couple’s unhappiness and desire to pursue a less prominent role.

In the final line, the Queen speaks as head of the Royal Family and revealed how it is her wish for Meghan, Harry and Archie to begin a ‘happy and peaceful new life’. 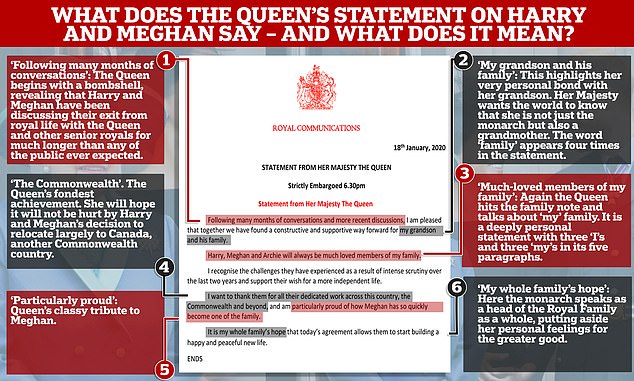 The statement from Her Majesty The Queen released tonight detailing how Harry, Meghan and Archie will remain ‘much-loved’ members of her family

‘Following many months of conversations’:

The opening line begins with a bombshell, revealing that Harry and Meghan have been discussing their exit from royal life with the Queen and other senior royals for longer than the public expected.

The couple announced their intention to step back as senior royals on January 8. In a statement the Duke and Duchess said: ‘After many months of reflection and internal discussions.’

‘My grandson and his family’:

The Queen highlights her personal bond with Harry and refers to him as her ‘grandson’ emphasising her role as not just the monarch but also his grandmother.

The word ‘family’ appears four times in the statement which relates to the Royal Family and the family unit of Harry, Meghan and Archie. 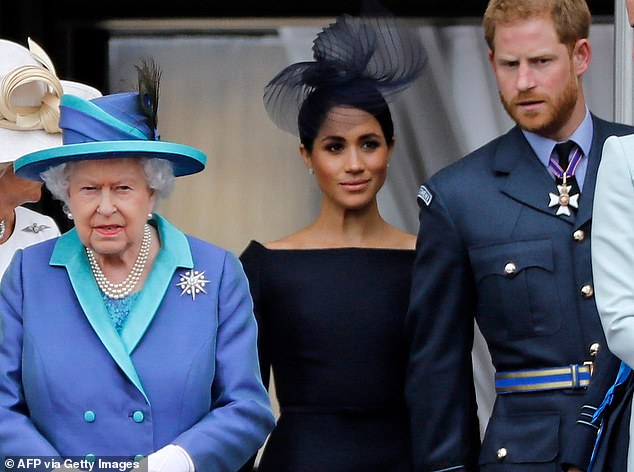 ‘Much-loved members of my family’:

The Queen hits a personal note by emphasising how Meghan, Harry and Archie will always remain ‘much-loved’ members of her family.

The statement has a deeply personal tone with the use of three ‘I’s’ and three ‘my’s’ throughout its five paragraphs.

Check this out  Boris Johnson's first 100 days as new UK prime minister: A baptism of fire

The Queen pays tribute to Meghan and praises how quickly she has become part of the family. This is in light of how many feel the Queen has every right to be unhappy with the way the Duchess has behaved.

Here the monarch speaks as a head of the Royal Family as a whole, putting aside her personal feelings for the greater good.