The largest concentration of military aircraft in recent memory will descend on the skies above London today as the Royal Air Force marks its centenary year.

Up to 100 jets, helicopters and aeroplanes from across a range of different eras of RAF history, including Spitfires and modern state-of-the-art aircraft, are expected to take part.

It is expected that the RAF’s new cutting-edge stealth fighter F-35 jets will feature, as well as helicopters including the Puma, Chinook, Juno and Jupiter.

Aircraft from the Battle of Britain Memorial Flight including the Dakota, Lancaster, Hurricane and Spitfire are also part of the line-up, as are training aircraft including the Prefect, Tucano and Hawk.

Today’s flypast will begin to form up over Suffolk to the west of Ipswich at around 12.45pm before heading towards Colchester, and then Chelmsford.

The formation will continue over the M25, Stapleford Abbotts, Hainault Forest and on to central London – passing the Olympic Park, Hackney, Bethnal Green and Shoreditch before getting to The Mall at around 1pm. 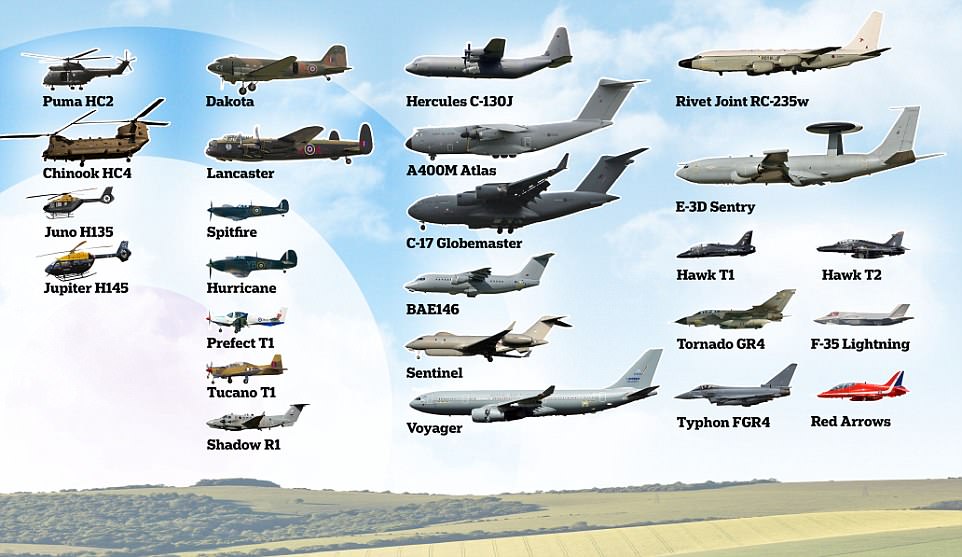 Up to 100 jets, helicopters and aeroplanes from across a range of different eras of RAF history, including Spitfires and modern state-of-the-art aircraft, are expected to take part in today’s centenary celebrations 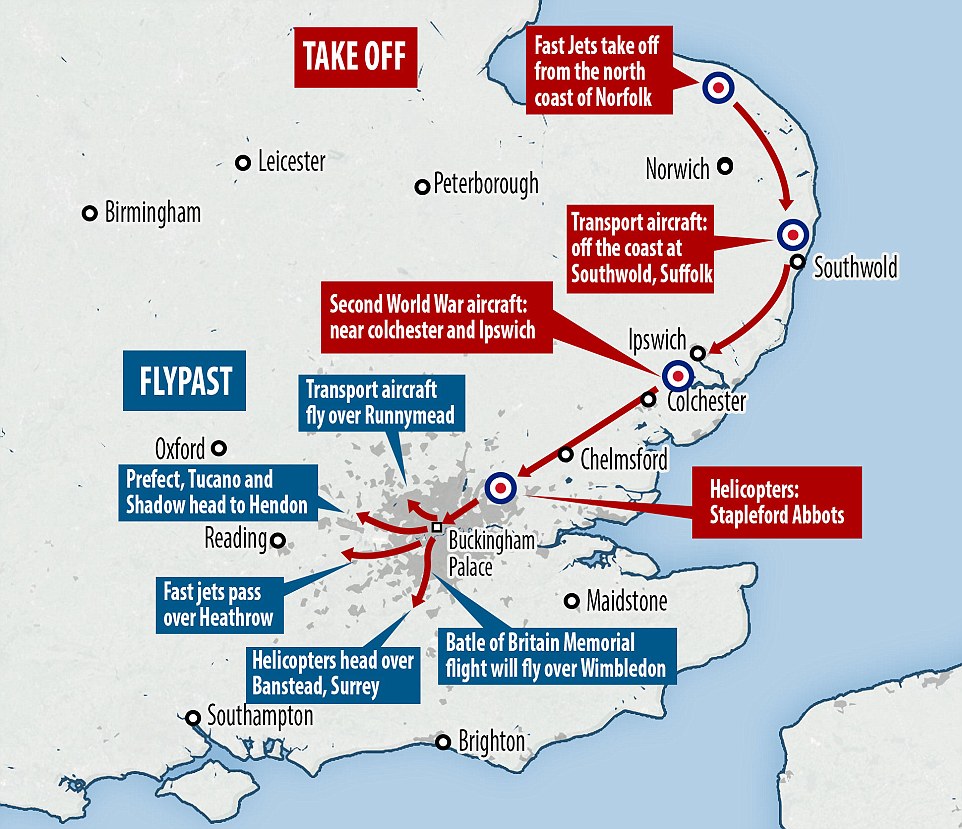 Today’s flypast will begin to form up over Suffolk to the west of Ipswich at around 12.45pm before heading towards Colchester, and then Chelmsford, before flying over the Queen at Buckingham Palace

Puma HC2 – The four-bladed, twin-engined utility unit is the RAF’s medium-sized transport helicopter and is used a variety of combat roles, including the tactical movement of troops, weapons, ammunition and stores on the battlefield.

Chinook HC4 – An extremely versatile heavy-duty helicopter that can be operated from land or sea bases into a range of diverse environments, from the Arctic to the desert or jungle. Chinooks are primarily used for trooping, resupply and battlefield casualty evacuation.

Juno H135 – The RAF’s basic helicopter unit that has now replaced the Squirrel. It is currently the quietest in its class.

Jupiter H145 – A training helicopter that has replaced the Bell Griffin. The state-of-the-art cockpit includes the very latest in Airbus Helicopters avionics. 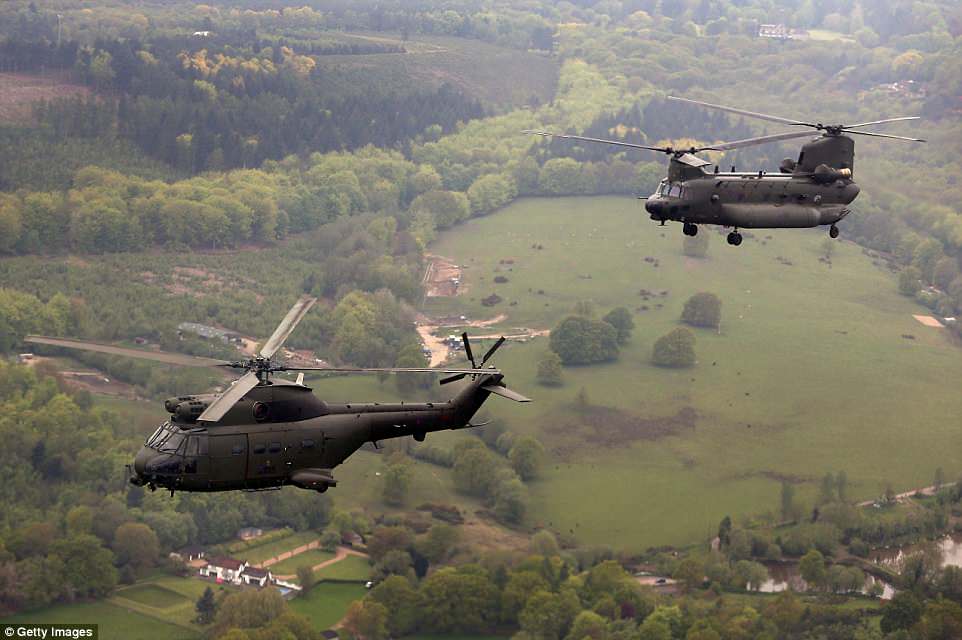 The RAF’s Puma unit (shown left) and the Chinook (right) will both feature in today’s flypast. Both units are used mainly for transportation, resupply and evacuation

Dakota – The Douglas C-47 Dakota is among the most successful aircraft designs in history. It became one of the world’s most famous military transport aircraft and saw widespread use by the Allies during World War Two and to this day is still used by military air forces and civilian operators worldwide.

Lancaster – The Avro Lancaster is the most famous and successful RAF heavy bomber of World War Two. The prototype Lancaster took to the air for its first flight from Ringway, Manchester, on 9 January, 1941. It carried out several daring and famous missions, including the legendary Dambusters raid.

Spitfire – Perhaps the most iconic fighter plane to ever fly in the RAF, the Spitfire is synonymous with World War Two and the Battle of Britain. Produced in greater numbers than any other British combat aircraft before or since the War, 20,341 Spitfires were built in 22 different variants and the aircraft remained in production for 12 years.

Hurricane – The sister unit to the Spitfire, the Hawker Hurricane is one of the classic fighters of all time, designed and built for war. It was at the forefront of Britain’s defence in 1940 and it played a major part in achieving the victory of 1945. Sadly, there are only 12 Hurricanes still airworthy worldwide; only 6 of those in UK.

Prefect T1 – A nimble two-seated training and aerobatic low-wing aircraft, the Grob 120TP Prefect is set to replace the Tutor T1 in the elementary flying training role with 57 Squadron at RAF College Cranwell. 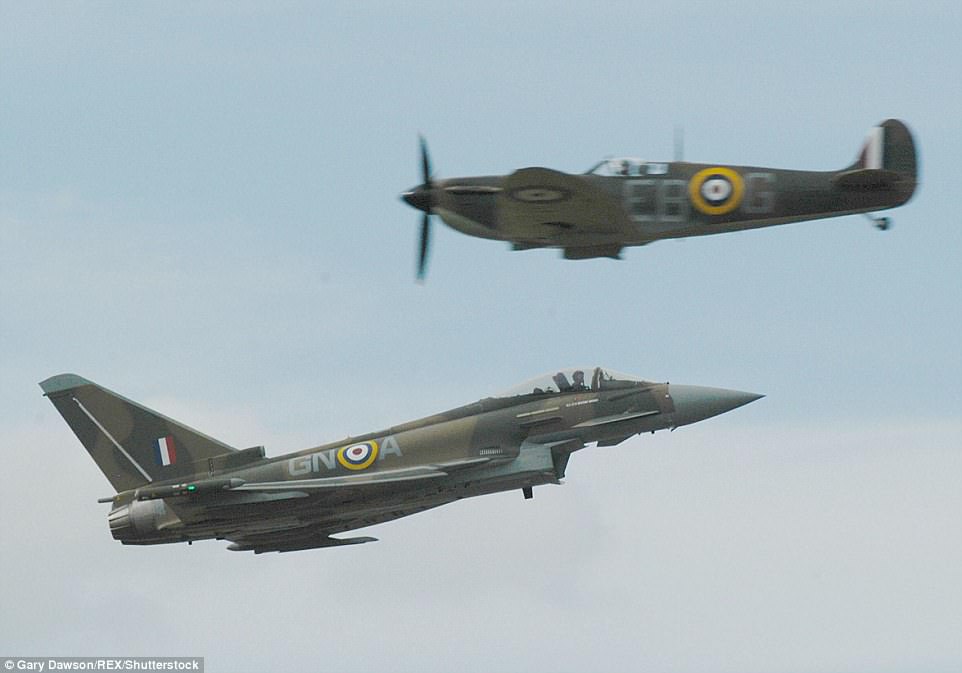 Tucano T1 – The Tucano provides basic fast jet training to RAF and RN aircrew on their training pathway to frontline fast jet aircraft. It is flown by 72 Squadron with No. 1 Flying Training School at Royal Air Force Linton-on-Ouse.

Shadow R1 – One of the UK’s key intelligence, surveillance and reconnaissance planes, the Shadow has electro-optical and electronic capabilities while it is also fitted with a comprehensive defensive aids suite.

Hercules C-130J – The Hercules is the RAF’s primary tactical transport aircraft and has been the backbone of UK operational tasks since it was brought into service in 1999. It is frequently employed to operate into countries or regions where there is a threat to aircraft.

A400M Atlas – A large transport unit, the Atlas provides tactical airlift and strategic oversize lift capabilities complementing those of the Hercules and C-17 fleets. It has the ability to carry a 37-tonne payload and can fly at altitudes up to 40,000ft.

C-17 Globemaster – The RAF’s largest transporter, the unit is used for combat, peacekeeping or humanitarian missions worldwide. C-17 is capable of rapid, strategic delivery of troops and all types of cargo to main operating bases anywhere in the world. It can transport 100,000lb of freight while flying at altitudes above 35,000ft. 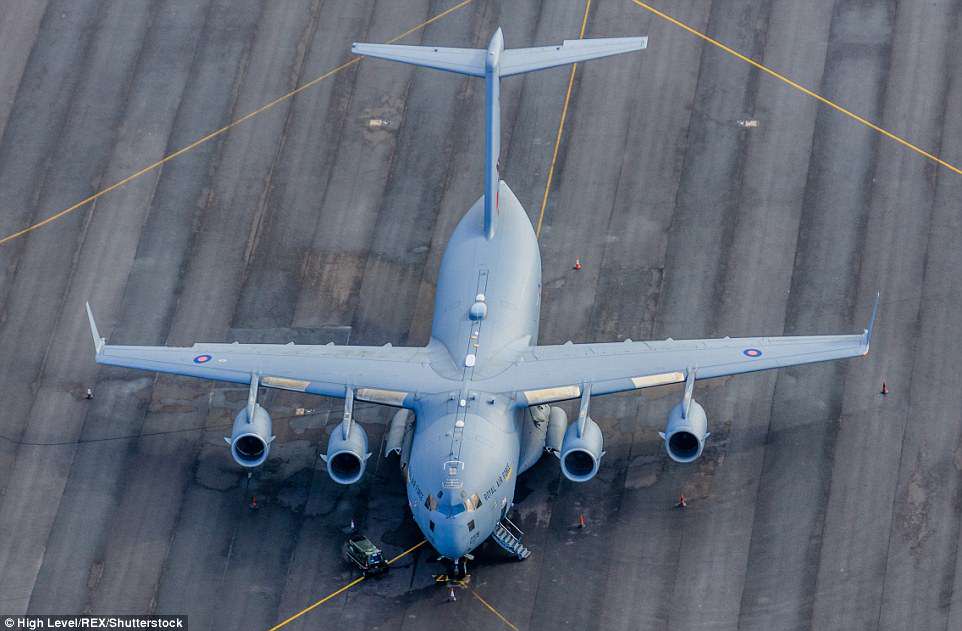 The RAF’s largest transporter, the Globemaster (pictured) is used for combat, peacekeeping or humanitarian missions worldwide and will be the biggest aircraft on show today

BAE146 – The transporter’s primary role is the transport of senior government ministers and Ministry of Defence personnel and, most famously, senior members of the Royal Family,

Voyager – This behemoth is the RAF’s sole air-to-air refuelling tanker and also operates as a strategic air transport. As well as providing fuel in the air, it can operate as a passenger aircraft in much the same way as a civilian airliner.

Rivet Joint RC-235w – RC-135W Rivet Joint is a dedicated electronic surveillance aircraft that can be employed in all theatres on strategic and tactical missions. Its sensors ‘soak up’ electronic emissions from communications, radar and other systems.

Check this out  Boy, 16, is stabbed in broad daylight in yet another knife attack in Lawless London

E-3D Sentry – This surveillance unit is an airborne early warning and command and control aircraft. The Sentry monitors airspace to provide threat detection of enemy aircraft and has the capability to detect ships, relaying information to maritime aircraft.

Hawk T1 – The Hawk Mk1 is a fully aerobatic, low-wing, transonic, two-seat training aircraft that is still used in a number of roles for the RAF. 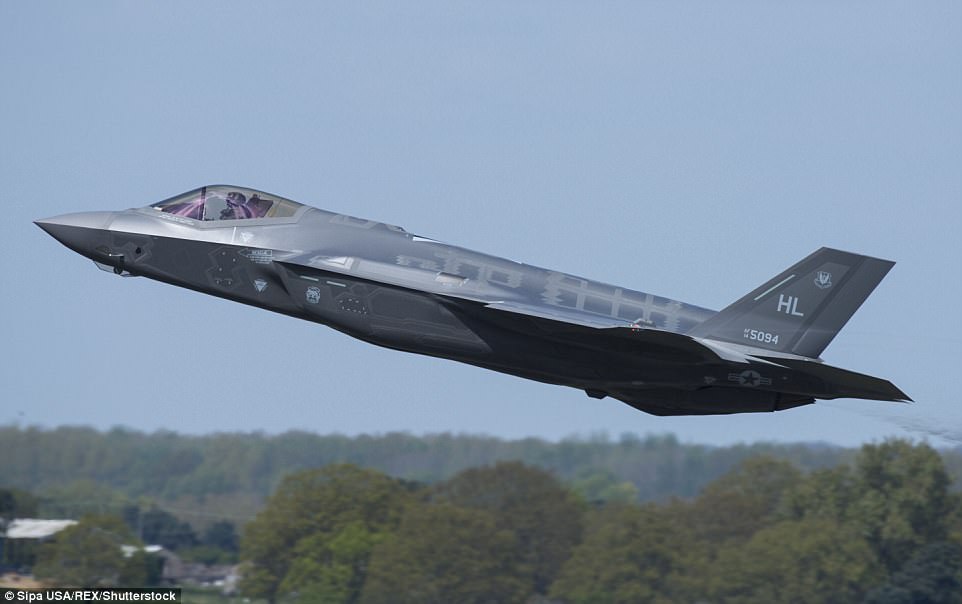 The RAF’s brand new fighter jet, the F-25 Lightning, is a state-of-the-art combat unit. Capable of flying at a top speed of 1,200mph and avoiding detection from enemy radars, it can operate from an altitude of 50,000ft

Hawk T2 – An update on the T1, the later model includes a glass cockpit and comprehensive avionics suite which provide a realistic advanced fast jet environment for training pilots.

Tornado GR4 – With its mix of weapons the Tornado GR4 is capable of engaging all targets on the modern battlefield. It is the UK’s primary ground attack platform and also fulfils an important reconnaissance role.

Typhoon FGR4 – An extremely agile, multi-role combat aircraft used in all the RAF’s current operations. It is deployed for the full spectrum of air operations, including air policing, peace support and high-intensity conflict.

Red Arrow – The RAF’s Aerobatic Team, the Red Arrows, is one of the world’s premier aerobatic display teams. Representing the speed, agility and precision of the RAF, the team is the public face of the service. They assist in recruiting to the Armed Forces and act as ambassadors for the United Kingdom at home and overseas.

F-35 Lightning – The RAF’s brand new fighter jet is a state-of-the-art combat unit. Capable of flying at a top speed of 1,200mph and avoiding detection from enemy radars, it can operate from an altitude of 50,000ft. The multimillion pound jets will undertake missions from HMS Queen Elizabeth, the new £3 billion aircraft carrier which is due to become operational by 2020.