A rare form of pneumonia is among the mysterious breathing-related illnesses that have sickened 450 people across the US, a new report from the Centers for Disease Control and Prevention (CDC) reveals.

Health officials say that they identified at least five patients at two hospitals in North Carolina between July and August 2019 who contracted acute lipoid pneumonia.

All of the patients reported using electronic vaping pens or e-cigarettes to vape THC, the main psychoactive compound in marijuana.

Scans of their lungs showed a build-up of fats, which has been linked to e-cigarette use in the past.

The report sheds light on some of the lung illnesses that have spread across 33 states, and authors say that investigations are needed in others states to see if those cases have the same features. 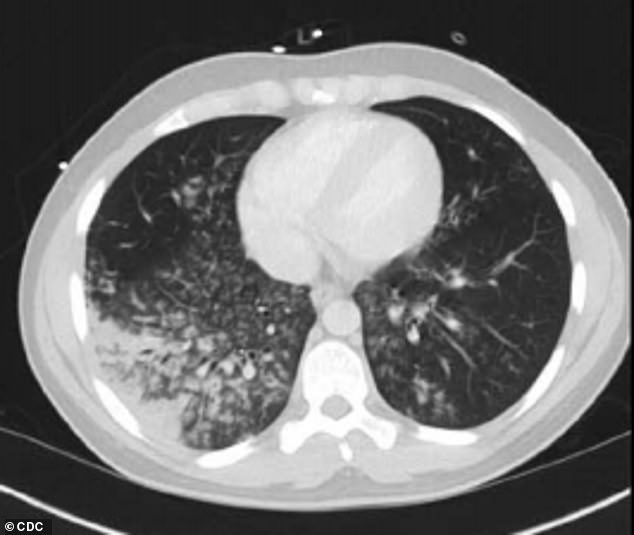 A new CDC report has revealed acute lipoid pneumonia to be among the outbreak of mysterious lung-related illnesses spreading across the US. Pictured: A scan showing a build-up of fats or oils in a patient with e-cigarette-associated lung disease in North Carolina

Acute lipoid pneumonia occurs when tiny particles from fat or oil enter the lungs and inflame the lining.

Some people have mild or no symptoms at all, while other people may experience chest pain, coughing and breathing issues.

Because the signs are non-specific, this can lead to a missed diagnosis, which can delay treatment.

It occurs in just one percent to 2.5 percent of the population, according to a 2003 study from the Albert Einstein College of Medicine and Montefiore Medical Center in New York.

This makes the condition extremely rare.

According to the report, the patients, who were between ages 18 and 35, all experienced several days of shortness of breath, nausea and vomiting before they were hospitalized.

THE CONTROVERSY OVER E-CIGARETTES

Electronic cigarettes, or e-cigarettes, are devices, often resembling cigarettes, cigars or pipes, designed to deliver nicotine or related substances to users in the form of a vapor.

E-cigarettes contain a solution that’s heated up and converted to an aerosol, which is then inhaled.

The most common ingredients are:

Proponents have touted that e-cigarettes are healthier, safer alternatives to traditional tobacco products.

Research has found that the aerosol from e-cigarettes was significantly lower in toxins than from conventional cigarettes, although toxins could be detected.

Additionally, those exposed secondhand were also at much lower risk from e-cigarettes than from traditional ones, though some risk might still exist.

This year, 450 people have been diagnosed with mysterious lung illnesses believed to be linked to vaping.

The CDC and the FDA have asked Americans to refrain from using e-cigs until their investigations have been concluded.

They all used electronic vaping pens or e-cigarettes to vape THC.

According to the report, three of the patients were in the intensive care unit for low oxygen levels and one required intubation and mechanical ventilation.

‘Initially, all patients were treated empirically with antibiotics for presumed…pneumonia, but all developed worsening respiratory failure within 48 hours of admission,’ the report reads.

After receiving intravenous methylprednisone, which treats inflammation, their conditions improved and they were sent home with more medications.

The authors say they believe the illnesses in these patients are from aerosols found in e-cigarettes.

‘These five cases highlight the importance of awareness of a potential association between use of marijuana oils or concentrates in e-cigarettes and lipoid pneumonia,’ the authors wrote.

‘Further investigation…[is] warranted to determine whether other cases in the ongoing multistate outbreak bear the same features as the cases described in this report.’

As of Thursday, 450 people in 33 states and eight territories have contracted mysterious breathing illnesses believed to be related to vaping.

In response to the outbreak, President Donald Trump and the US Food and Drug Administration announced on Wednesday a ban on flavored vaping products – aside from tobacco – from store shelves.

That same day, CDC director Robert Redfield released a statement announcing his support of the ban.

‘CDC strongly supports FDA’s announcement…that it intends to finalize an enforcement policy that will clear non-tobacco-flavored e-cigarettes from the market,’ he said.

‘This is an important step in response to the epidemic of e-cigarette use among our Nation’s youth…Clearing the market of non-tobacco-flavored products is important to reverse this alarming epidemic.’

He recommended that the public – especially teens – refrain from using any electronic cigarette or vaping device.’

‘Any tobacco product use, including e-cigarettes, is unsafe for youth,’ Redfield continued.

‘Nicotine can harm the developing adolescent brain. We must do everything we can to reduce the use of e-cigarettes among middle and high school students.’